Popularity of the State Quarters in the set is supporting a high value for the silver version. These coins represent "first of year design" a popular collecting theme of collectors. Adding to the appeal is the 90% silver alloy.

A complete redesign of the quarter took place in 1999, launching the 50 State Quarters program. A chronological order of states entering the union of the United States are each portraited on the reverse of the quarters. The program celebrated the 50 states over 10 years of issuing 5 quarter designs each year.

Completing the packaging, the two cases fit into a light weight box trimmed in blue with stars. Printing on the front of the box features the Statue of Liberty, the State Quarters logo and the date 1999 printed in blue.

Metal composition of the half dollar, dime and quarters in the proof set is the "clad alloy". These coins contain 8.33% nickel and the balance is copper overall. The outer surface of the coins have a higher percentage of nickel giving the bright appearance.

A purchase option from the mint. A single case of the first five state quarters, within a blue background inset.

An outer package box differs from the 9-coin set with a Bald Eagle graphic in blue and the date 1999 is silver in color.

Metal composition of the quarters is Cupro-Nickel-Clad, an alloy of 8.33% Nickel and Copper as the balance.

The third purchase option of the 1999 proof set. Four coins, the cent, nickel, dime, and half dollar in one case. Background insert is red with a flowing flag image. A second case houses the five State Quarters. Inset holding the quarters is red with the State Quarter loge in white.

Outer box with a view of the Statue of Liberty in red holds the two cases. "Silver Proof Set" is noted on the box above the date 1999. 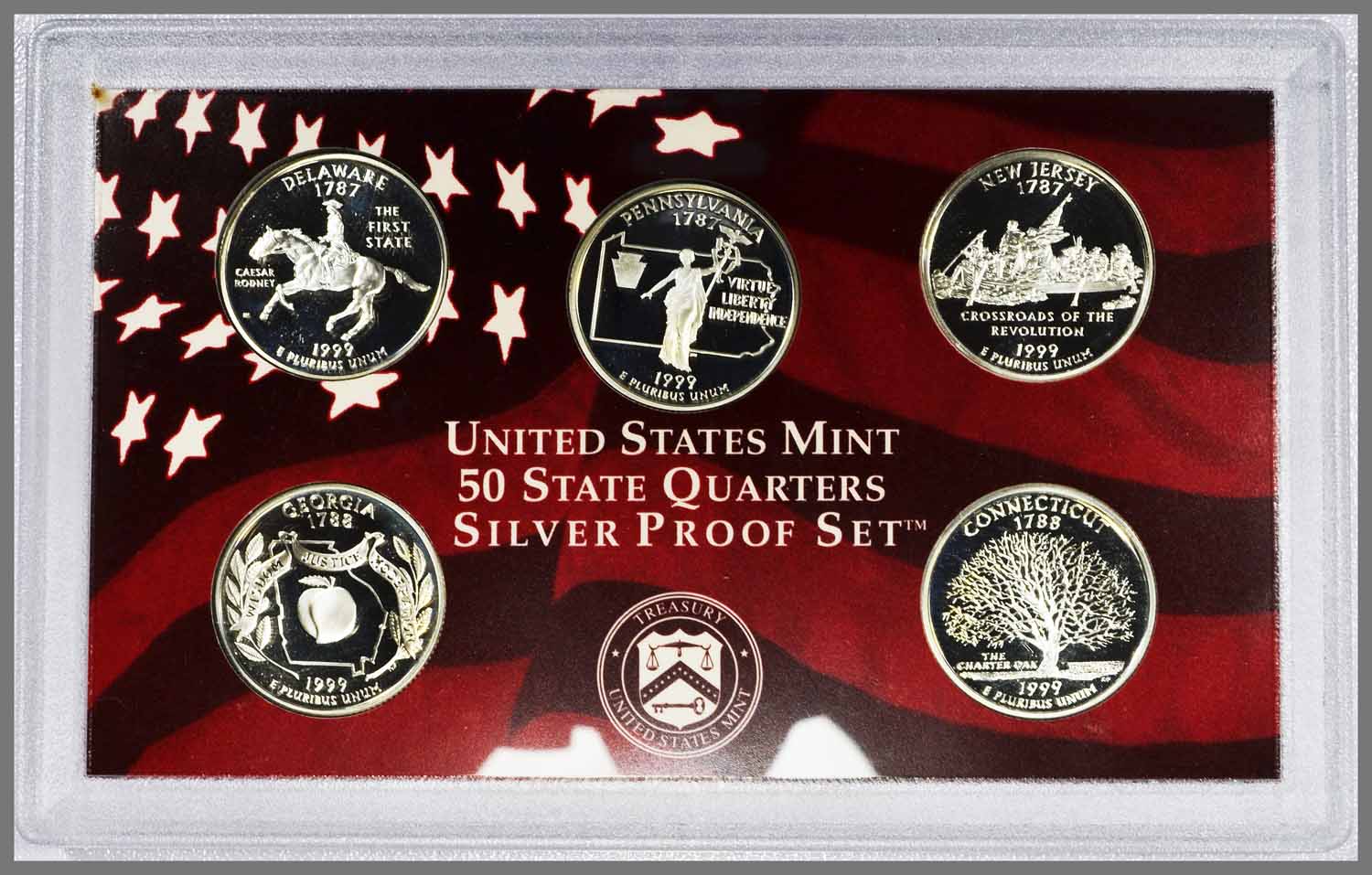 Five different quarters per year are minted celebrating the states that entered the union.

Central to the design is Caesar Rodney's historic horseback ride in 1776. Arriving in Philadelphia in time to vote for the resolution of independence and signing the Declaration of Independence in August.

The reverse's main device is a depiction of the Commonwealth. A statue atop the dome of the Pennsylvania State Capitol. Finely detailed lady on the coin holding a staff topped with an eagle.

A scene of the "Washington Crossing the Delaware River" extends edge to edge on the reverse. Highly detailed and finely engraved.

An outline of the state encloses the Peach, a state symbol. Overtop is a fine ribbon with the state motto "Wisdom, Justice, Moderation".

The Charter Oak, a large white oak tree, a symbol of American independence fills the reverse of the quarter. 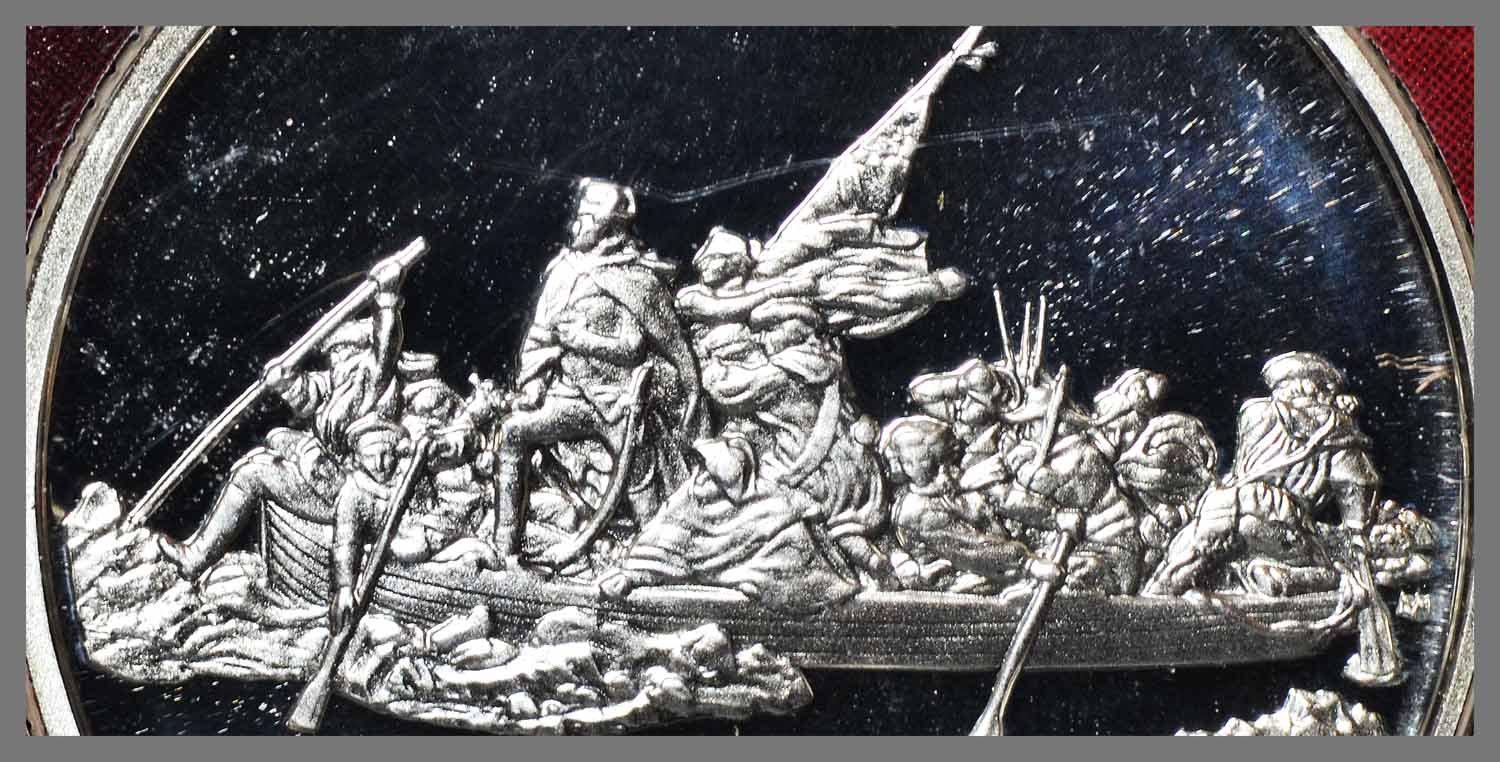 A very fine example of the engravers art is the "Washington Crossing the Delaware" reverse to the New Jersey State Quarter. The design is based on a painting by Gottilieb Leutze in 1851 commemorating General George Washington in the famous crossing of the Delaware river in December 1776. A close-up view shows minute detail of Washington standing and many figures within the boat.

Popularity of the 50 State Quarters is a huge underpinning to value of 1999 proof sets. Many new collectors took up collecting the coins as a set. 1999 represents the first year of issue and that itself is a popular collecting theme. 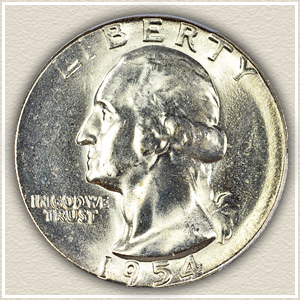 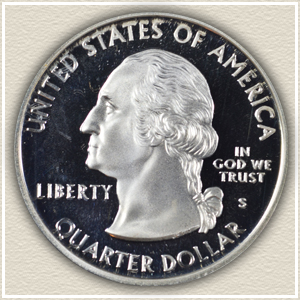 First year of a new design to the obverse of the Washington quarter was also introduced along with the State Quarters. The obverse design of 1932 through 1998 was replaced. Washington's portrait was modified to a smaller size allowing for the additional lettering of "United States of America" and Quarter Dollar". An "S" mintmark designating the San Francisco mint is located under "In God We Trust".

Changes to the presentation of the proof set included the box color and inset within the case. New artistic graphics are found on the inset and boxes as well. All adding to enhance the display of the set.

1999 Proof sets, the finest quality of coinage became important to collectors both current collectors and new ones attracted to the State Quarters. Popularity creates demand and availability determines value.

Chart listing proof set values spanning 1955 onward. Proof sets and their packaging changed over time, improving their presentation and preservation of the coins. Collecting and enjoying these sets are very popular today. Understanding the value involves both the specific coin, condition and completeness of the set and packaging.

All US coin values. Identify your coins using the image links leading to value charts. Additional points to value are considered Date | Mintmark | Condition each described and imaged within each series. Surprising value is found in the smallest of detail.