Penny values span a wide range. Wheat pennies begin at 2 cents to highs found with early colonial large cents valued in the thousands. Using a step by step method discovers how much your old pennies are worth. Series are identified along with dates and mintmarks. Condition is judged comparing to images, video and descriptions. Match your coins to each penny series value chart.

How to determine penny values begins with identifying the denomination and series. Examine your coin and compare to the following images to find a match.

Note: Images within blue borders are Links to the Penny Values series.

Half Cent Values | All Half Cents are Rare

From the early days of coinage, half cents are now scarce and collected by specialists. Their demand is supporting strong values, high condition examples are avidly sought. Minted 1793 to 1857; value charts list date and condition ranges of values. Confirm your coin as a half cent by denomination on reverse.

Another great American coin that specialists study intensely and avidly collect. Large cents, recognized by the denomination on the reverse, are worth close inspection. Carefully examine your coins for condition. Visit the series specific page, a check of the value chart shows rare dates and scarce varieties in strong demand. Many large cents in nice condition with abundant detail remaining, are a valuable find.

Valuable because they are so popular. Flying Eagle pennies, a short running series range in worth and desirability depending on date and condition. 1856 through 1858 cents stand out as sought-after collector coins because of the bold flying eagle design. And they represent the introduction of the modern small cent size.

A very popular and recognizable coin; from beginner to advanced collectors, all enjoy the collecting of Indian Head pennies. These large numbers of collectors, building collections are putting a heavy demand on the rare dates and better condition coins. Compare your now very old Indian pennies to the series value chart.

Lincoln Penny Value | On the Rise

Early date Lincoln pennies and higher condition coins are on the move. Some of these Wheat pennies are not as common as once believed. Their prices are climbing to reflect the demand. A quick look at the value chart shows a big change in how much your box of old pennies is worth. Condition is also playing an increasing role.

2 cent coin value is steadily increasing over the long term. A short series, serving a specific demand at the time, minted 1864 to 1873. Admittedly not the most popular coin, however those collecting the series are very serious. When the right coin is available and is needed for their collection, none hesitate to pay.

Step 2: | Date Plus Variety and Mintmarks are Identified

Penny values are date specific. Scarcity and rarity from one date to the next vary greatly within each series. Collections are built with a focus on dates and date runs. Within a series, invariably certain dates are the commonly found issues. As example; a 1907 Indian penny is available in all grades and affordable. However, an 1877 Indian penny is rare and highly valuable. Date further identifies your coin and combined with availability, establish value.

Mintmarks became important to penny values starting in 1908. The San Francisco branch mint began coining Indian pennies. Until then Philadelphia produced all cent and two cent denominations. Collectors now have another variety as part of collections. Mintmarks are listed and valued on Indian and Lincoln value charts.

Accurate recognition of dates also becomes important when separating variety and value. As example, a 1909 penny has a total of six varieties. Two are Indian pennies, from different mints. Four are within the Lincoln cent series, different mints and sub-varieties.

🔎Step 1 above are image links to match your coin. Visit the series page for value charts and details on how to value your old penny.

Condition is one of the subtle steps affecting penny values. As always, nicer, better preserved coin are always worth more. Grading is judging the surfaces and identifying the amount of wear or lack of wear.

Dealers and collectors identify the different stages of wear separating coins from the most worn to the least and each is assigned a "Grade". You do the same comparing to images of the different grades and matching your coin.

Mint State Grade: A coin with no wear to the surface is considered Mint State grade. Each design has high points judged to detect any smoothing and removal of luster. If no evidence of wear is seen a coin grades in the mint state category.

Extremely Fine Grade: Very light wear is noticeable in the Extremely Fine grade. Tops of elements such as strands within hair, cheek, and open fields are closely judged. For example: the reverse of a Lincoln cent features fine parallel lines in the "wheat" design. If all lines are separate and sharp the coin is showing signs of grading Extremely Fine or better.

Fine Grade: Moderate wear on most of the coin and heavy wear on high points describes overall the Fine grade. Many early era copper coins in a pleasing Fine grade are very collectible and valued. A typical example, such as an Indian penny in fine grade, has flat areas within the hair and face and above her eye. However, the flat spots do not connect, separation of high areas remain.

Good Grade: Heavy wear and a lack of remaining design is typical of a penny in Good grade. Most major and minor design features are now a flat surface. Half cents are a series with many examples in very worn condition. A half cent with strong rims, readable lettering, and lack of deep marks; despite Liberty's portrait worn to an outline, retains value.

Within the different series of copper US coinage are certain qualities setting one coin apart from others. Primarily its overall appearance sets the initial eye appeal impression. Copper coins when first minted began as shades of bright red-orange-gold. Toning begins immediately and starts to deepen the colors turning shades of brown. Toning of the surface continues, unless protected, to very deep shades of brown-black. Dark colors tend to hide detail and lower eye appeal to old copper coins. 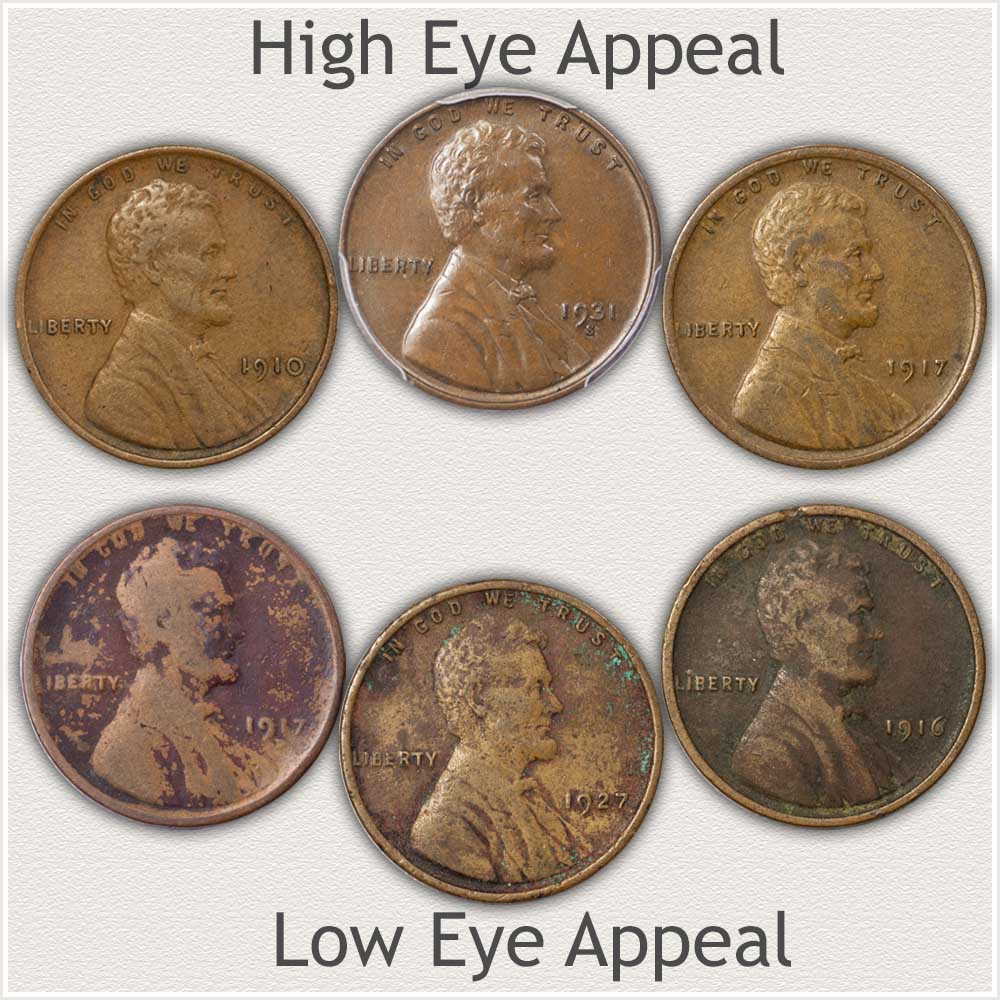 Comparing the coins in the image; nicely toned, circulated examples project pleasing eye appeal. A deeply toned cent lacks a clear view of the coin, obscured by the deepness of color. Old coins and collections are enjoyed because the eye appeal and aesthetics of each example in the set. Visual qualities are part of value.

Special qualities are examined and highlighted within each series. From half cents, large cents, Indian pennies, and Lincoln cents all have unique examples of value added by special qualities. Often it is these subtle points elevating a coin to solid collector quality and appeal.

🔎Match your coin to the image links in Step 1 and visit; how to determine in-depth penny values of your coin.

Coin values are determined by using the grading images to judge condition then checking the date and values on the charts provided. Discover all the rare varieties, dates and mintmarks.

An excellent picture index of all major US coin series. Compare and identify your coin to the picture, click on the image, and go immediately to your old coin value.

Recommendations on basic supplies that greatly improve coin storage. Providing for safe handling, preserving of value and organizing your box of old coins.