Us Mint proof set values chart. Collecting of proof coins in sets is a popular part of the coin collecting community. Dating back to 1955 these sets of coins with their packaging protect and preserve the special "proof" qualities imparted to the surface of the coins.

Market values are for sets in original mint packaging such as the cellophane flat packs used 1955-1964 and plastic cases introduced in 1968.

Note: Chart is an average of retail listings.

Production of proof coins assembled into packaged sets began with the "flat pack" in 1955. Each coin was separated from the other and the thin plastic was some protection against the elements. 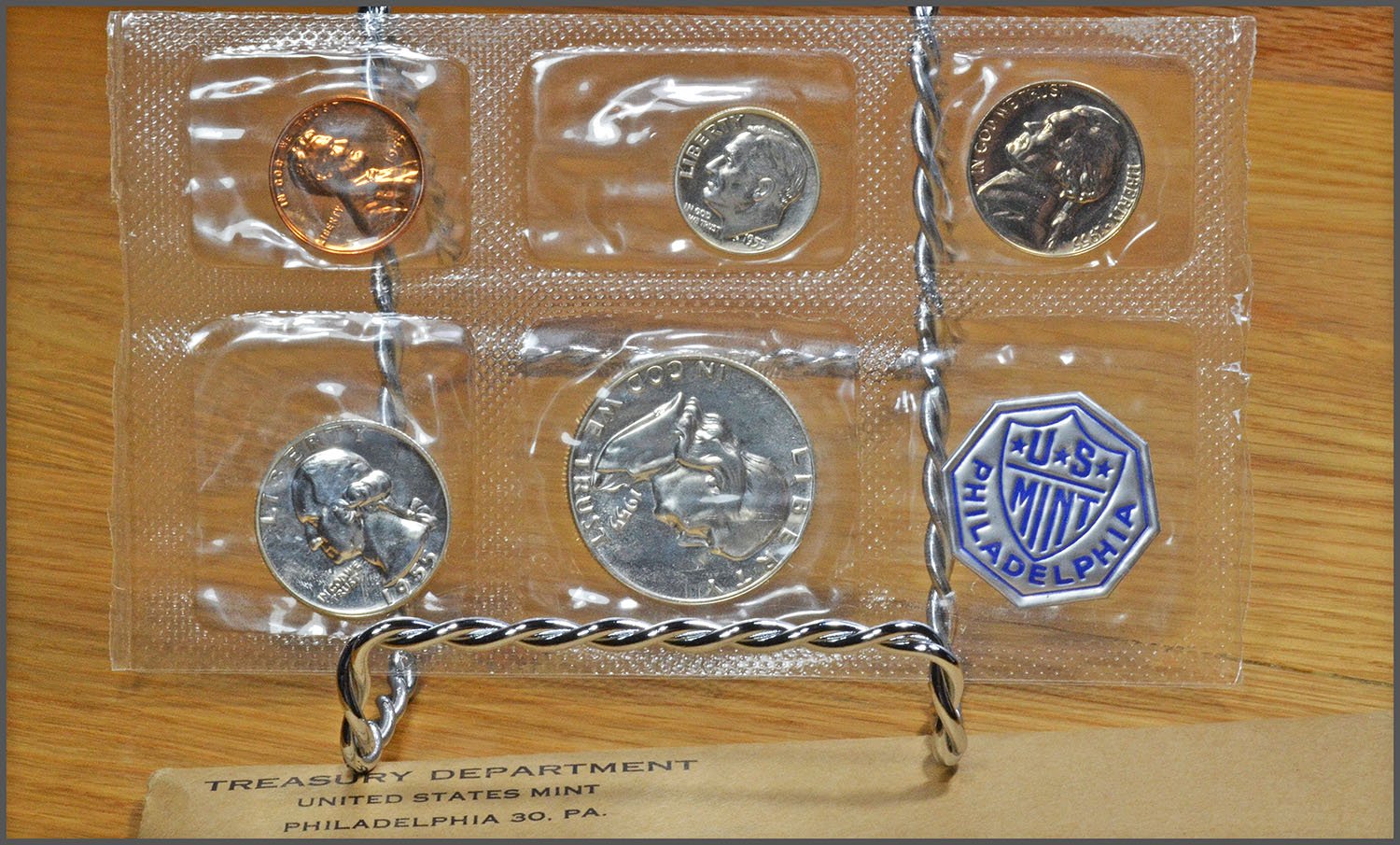 Surfaces of proof coins are delicate; produced using highly polished planchents (blanks) and polished dies to strike the coins. These highest quality examples of coins - often struck twice or more are distinguished by the mirror fields and fully raised and defined details to the design.

To complete the proof set packaging two cardboard inserts were placed either side of the plastic and an outer brown envelope contained the set. Note; these all combined, are typically collected as part of a 1955 proof set and its value.

In 1968 a dramatic change to the package and presentation of the proof set began. Proof coins were now housed in a rigid plastic case. A black insert within the case held each coin separated. 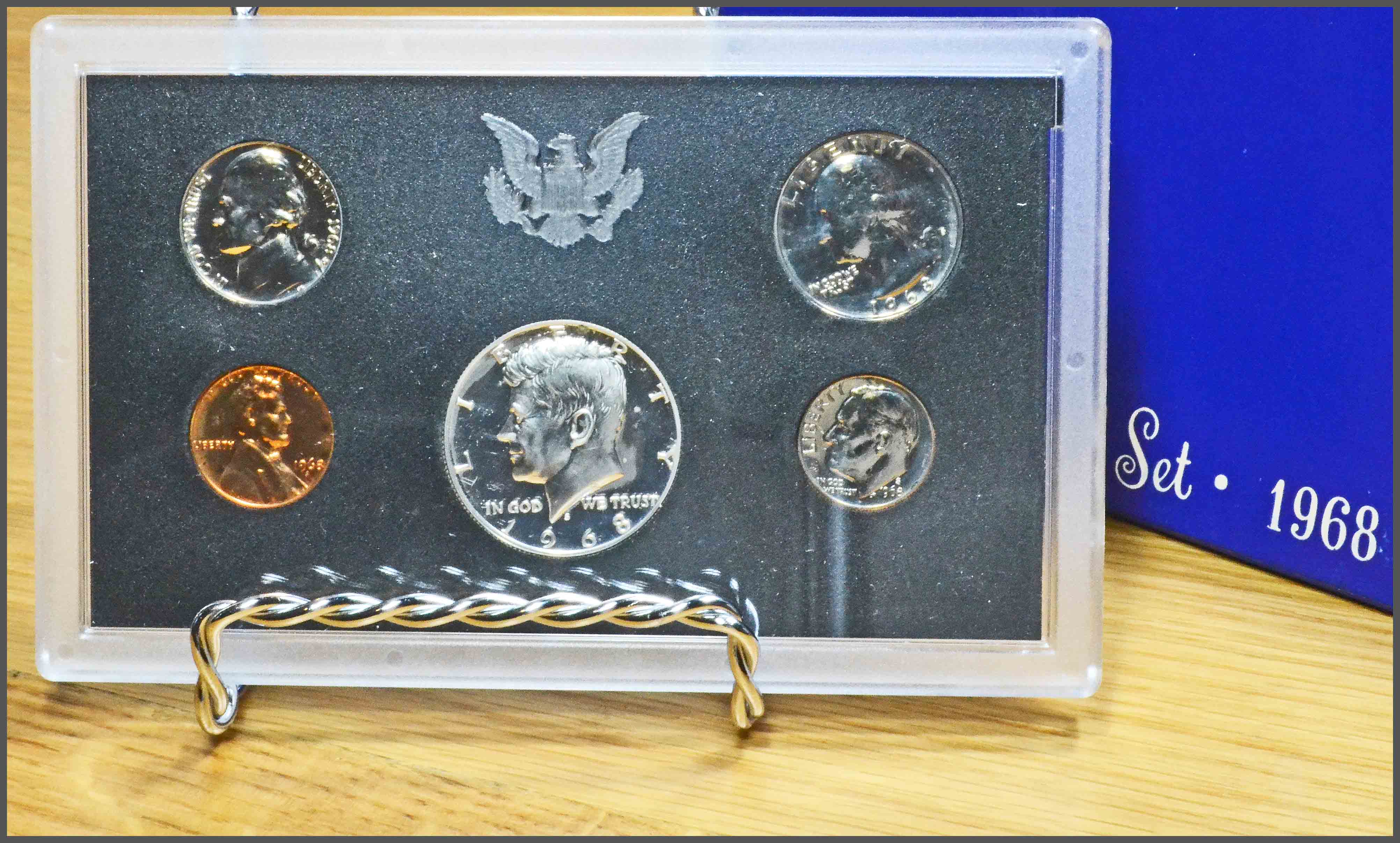 Collecting proof coins as sets entered a new era and enjoyed a boost in popularity in 1968.

1999 began the State Quarters series. Both clad alloy and 90% silver alloy coins were struck as annual proofs. These coins are presented in three separate annual sets. 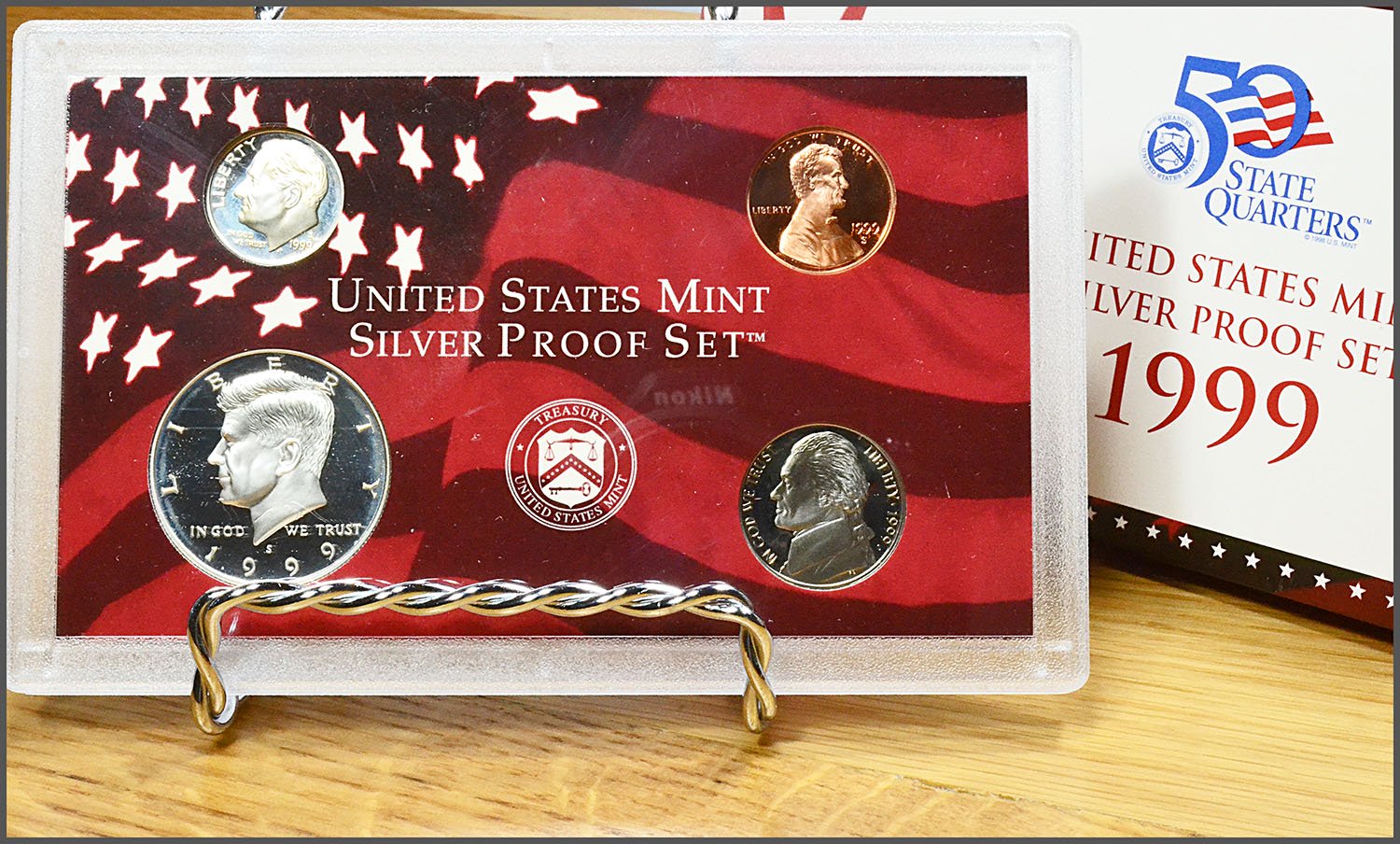 Expansion of the number of sets, included design changes to the set packaging as well. Between the years 1968 and 1998 proof sets and their design were modified slightly. Notably in 1999 graphics appeared on the insert within the case. Proof coins were displayed with thematic graphics printed as backgrounds of the insert.

Boxes housing the proof sets also include additional artistic images. By 1999 collecting proof sets was well established and popular. State Quarters proof sets form a very diverse collection. These sets house denominations of cents through dollar coins. Design changes to the dollars and the nickel appear over the years. Additionally, various alloy compositions of the coins were introduced and the 50 different designs of the quarters added to the variables from year to year.

Judge Overall Condition of the Coins and Packaging

Proof coins are produced by the mint in as close to a state of perfection as possible. Anything noticed on the coin is considered an imperfection. Look for the absence of small spots of discoloration to the surface. A bright, non cloudy appearance is the original proof perfection.

Next examine the plastic case and judge for no scratches obscuring the view of the coins. Also the outer package is susceptible to wear. Nice sharp corners to the box are well received by collectors. Additionally, absence of marks and firm closure tabs indicates a gently handled proof set.

Two main factors are considered in storing and preserving the value of your proof sets. The coins themselves are protected well by the original plastic case. Packaging included with the case is also part of the value and collectability of the sets. 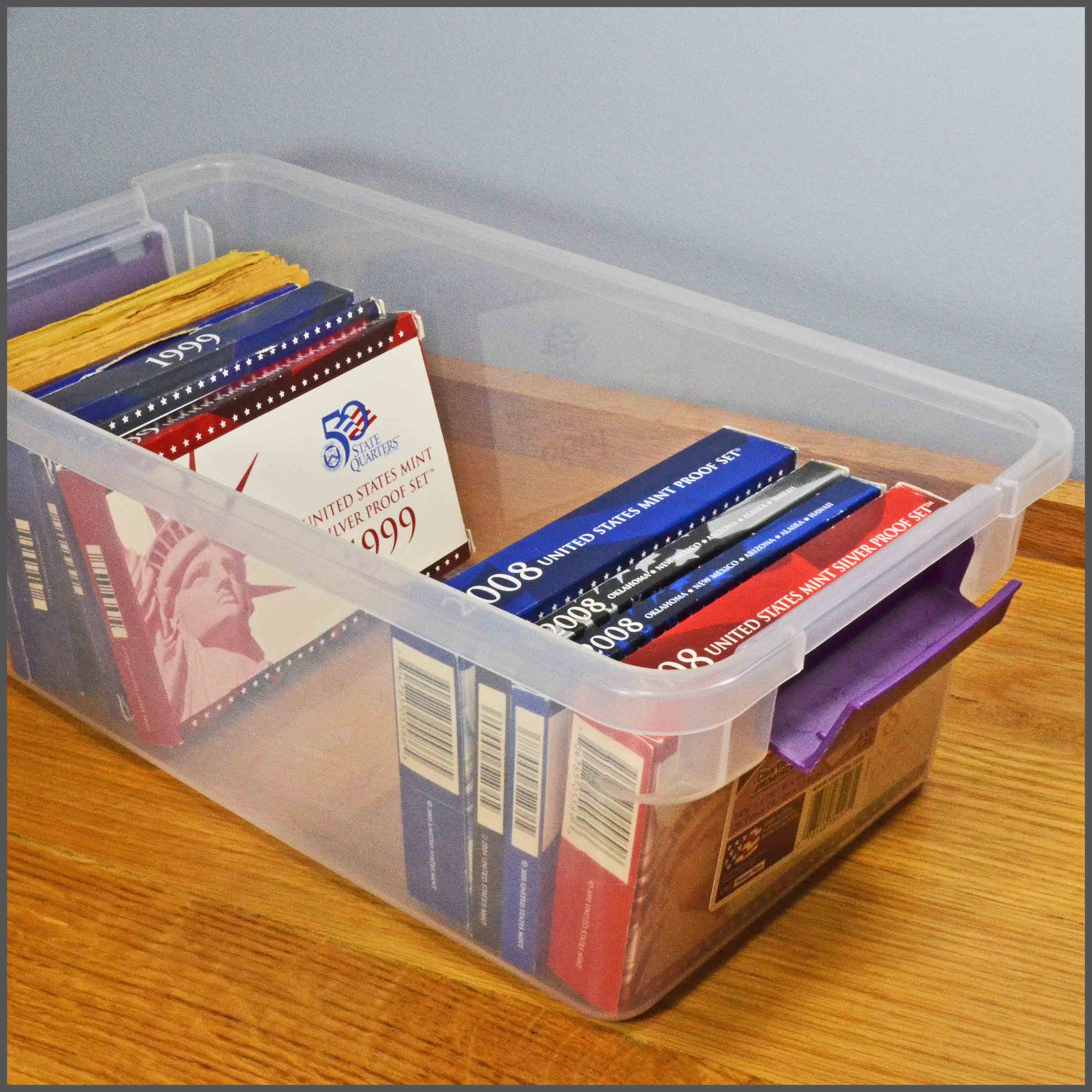 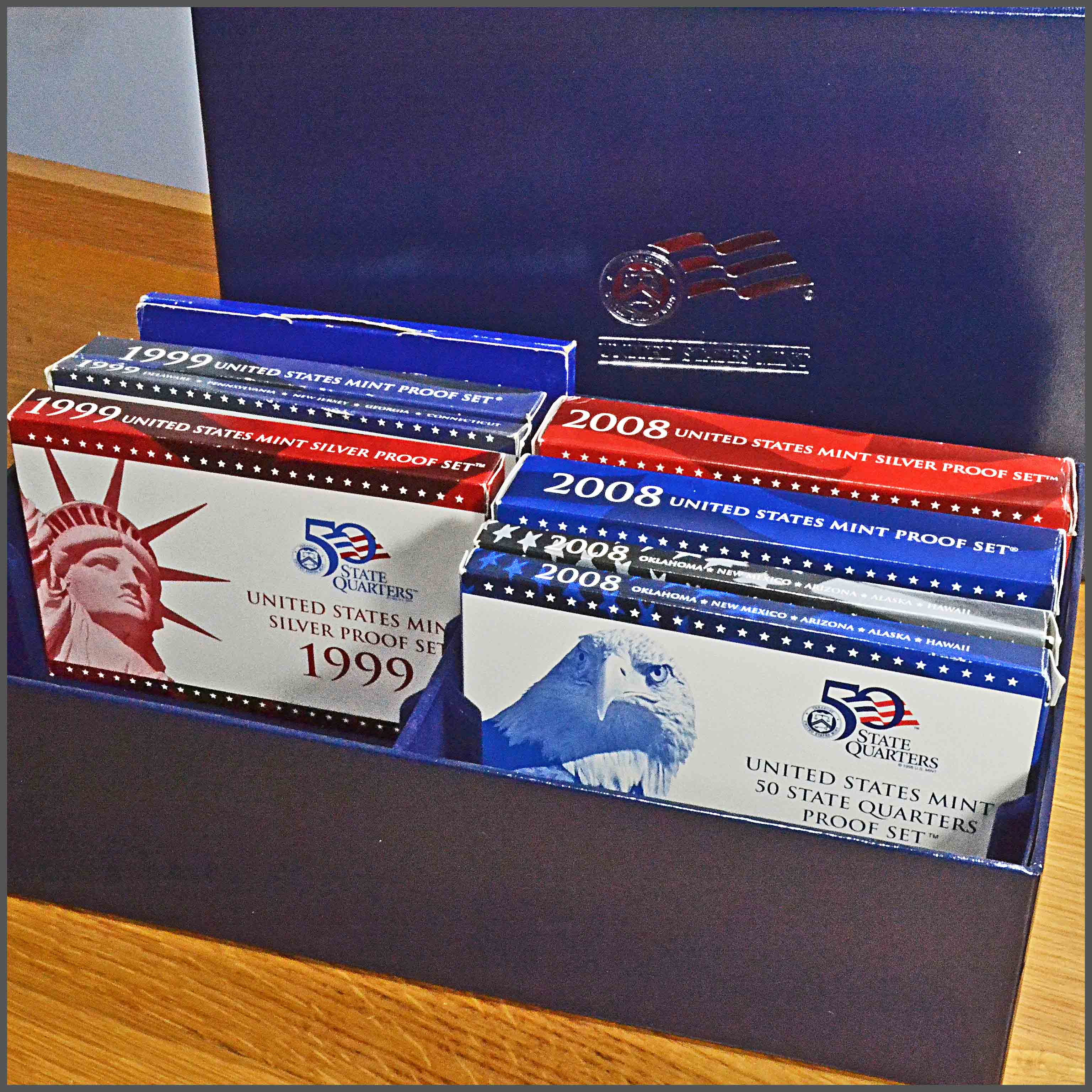 Primary to preservation is a dry environment, low humidity and shaded from sunlight. This provides a good setting for the coins.

Degrading the "newness" of the packaging is also considered and easily avoided. Keeping the original boxes and papers included with the set in crisp condition contributes to preserving value. A dedicated storage box is essential. Small plastic containers are a good first choice; a long, short, 6 qtr. size holds many standard proof sets.

Additionally, custom sized collector storage boxes are obtainable from the mint. Boxes of different capacity options are available, designed to hold the proof sets in their original packaging. Sturdy, imprinted with the mint logo, these boxes are an excellent storage choice.

Proof set values reflect popularity and demand of the individual set. Any number of collectors are involved in proof coin collecting thus creating demand. Collections often focus on certain "series" of proof coins providing a theme to the collection. State quarter proofs are one example. Sets of just the silver alloy proofs is very popular, adding value to the coin, not reflecting original mintages.

Maintain the value of your proof coins by handling the sets gently and safe storage.

All US coin values. Identify your coins using the image links leading to value charts. Additional points to value are considered Date | Mintmark | Condition each described and imaged within each series. Surprising value is found in the smallest of detail.