Common date and lower grade Barber half dollars rise and fall with silver, currently 9/14/2020 each is worth $15.21 . Early and rare date Barber half dollar value is solid to rising. Collector quality coins are always in demand. A step by step method is used to identify higher value date and mintmark combinations. Additionally, how to grade and recognize quality condition coins is Step 2 below.

The value chart highlights the special coins and their value. Follow the steps to identify the value of your coin.

The above are wholesale Barber half dollar value. Computed from dealer's price lists with various mark-up factors figured in. They reflect closely the value you would expect to receive when selling.

Barber half dollars, named after the designer, Charles E. Barber are the scarce issues of the Barber series of coins. Barber dimes and quarters (also designed by Charles E. Barber) are in comparison, less scarce. These half dollars minted 1892 to 1915 feature the strong profile of Liberty wearing a liberty cap with laurel wreath. Holding the cap is a ribbon inscribed "Liberty". A reverse similar to the dimes and quarters displays an eagle bearing the US shield - symbol representing Congress. Thirteen arrows in the left claw and olive branch in right are symbols of security and peace.

Four mints played an important role in supplying the nation with half dollars. Philadelphia and San Francisco striking Barber halves each year of the series. New Orleans and Denver contributed also in lesser amounts. A significant difference in value is found in recognition of the mint and numbers minted. 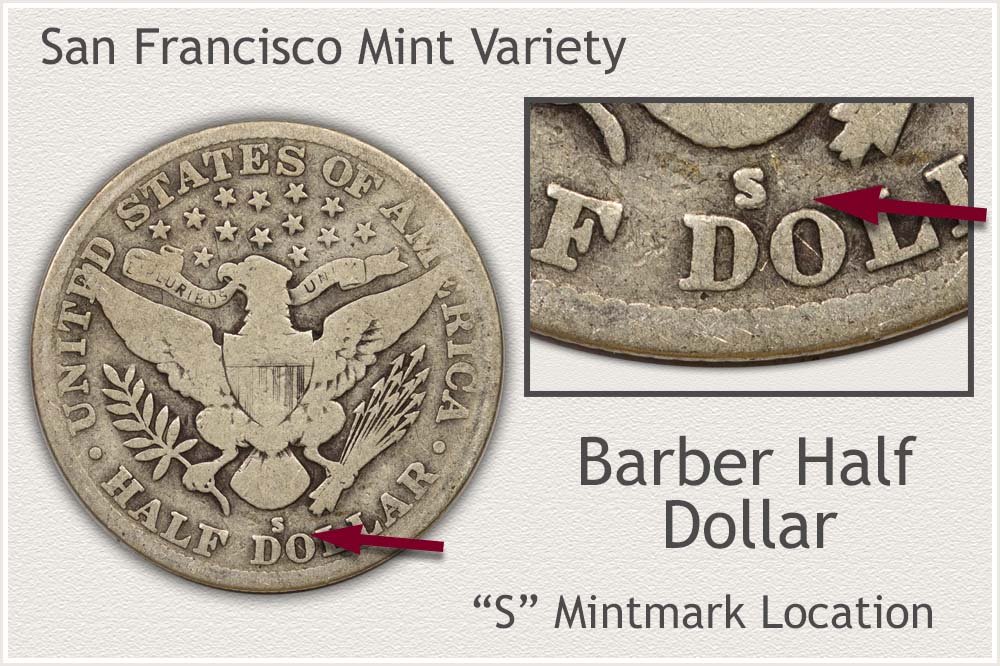 San Francisco mint struck the second largest amount of Barber halves. Each year of the series San Francisco produced as least 500,000 halves, totaling over 37 million. Many of these branch mints coins are available in circulated and mint state grades and wide range in values. Significant years are the early 1890's few were saved in any condition.

On the reverse the "S" mintmark of San Francisco is under the tail feathers. 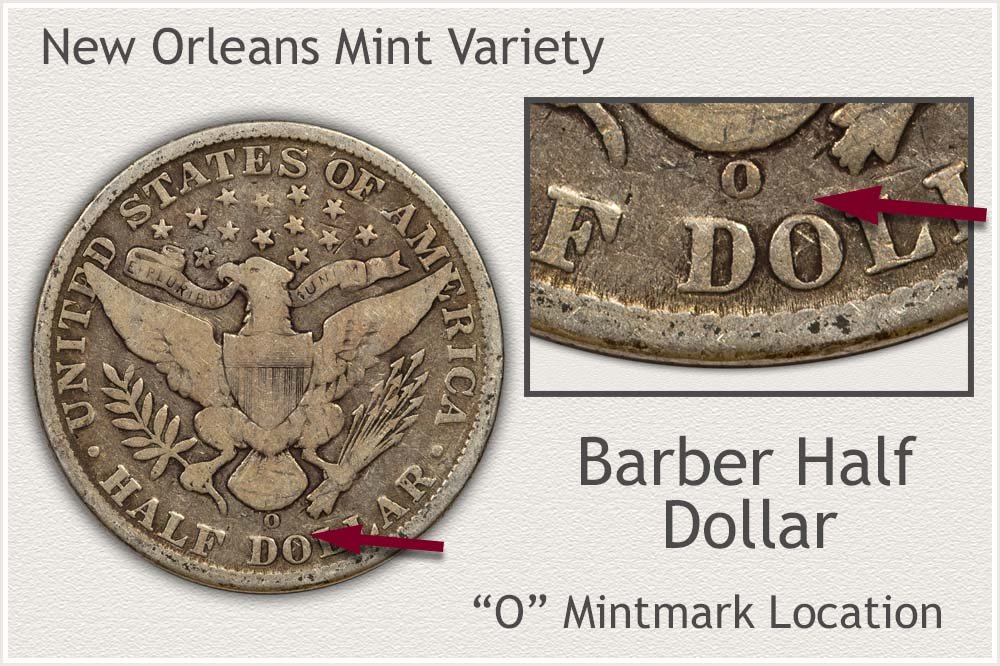 New Orleans help launch the Barber half dollars series striking 390,000 in 1892. This initial year is now a very scarce coin, worth in the hundreds of dollars. New Orleans continued striking halves each year until 1909. Total production just over 31 million halves. Second lowest mintage New Orleans half dollar is 1905 505,000 pieces and affordable.

New Orleans placed an "O" mintmark under the eagle on the reverse. Note: Careful examination is needed; the "D" of Denver is similar in appearance. 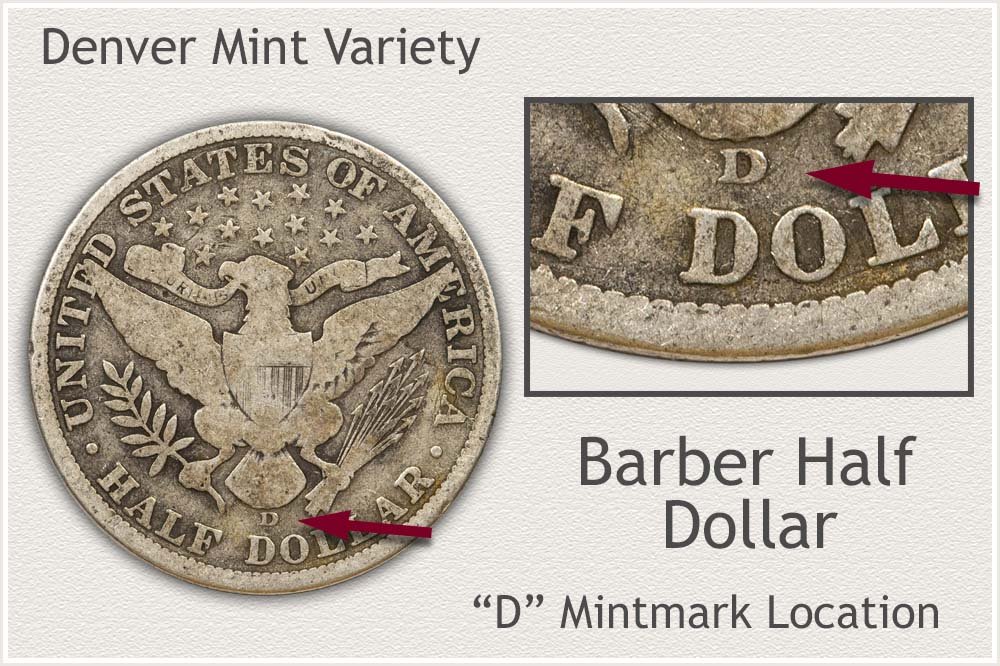 Denver was a new mint in 1906, with a focus on silver and gold issues. It started strong with over 4 million Barber halves, striking the largest total of all mints in 1906. Its production was sporadic, and missing years 1909, 1910, and 1914 until the end of the series. It finished with the lowest total of all mints; 15.8 million halves struck. Today these are available in low grades and become collectible in Fine and above.

A "D" under the tail feathers of the eagle on the reverse identifies the Denver mint coinage. Note: Look closely, the "O" of New Orleans mint is similar. Years 1906, 1907, and 1908 both mints struck half dollars. 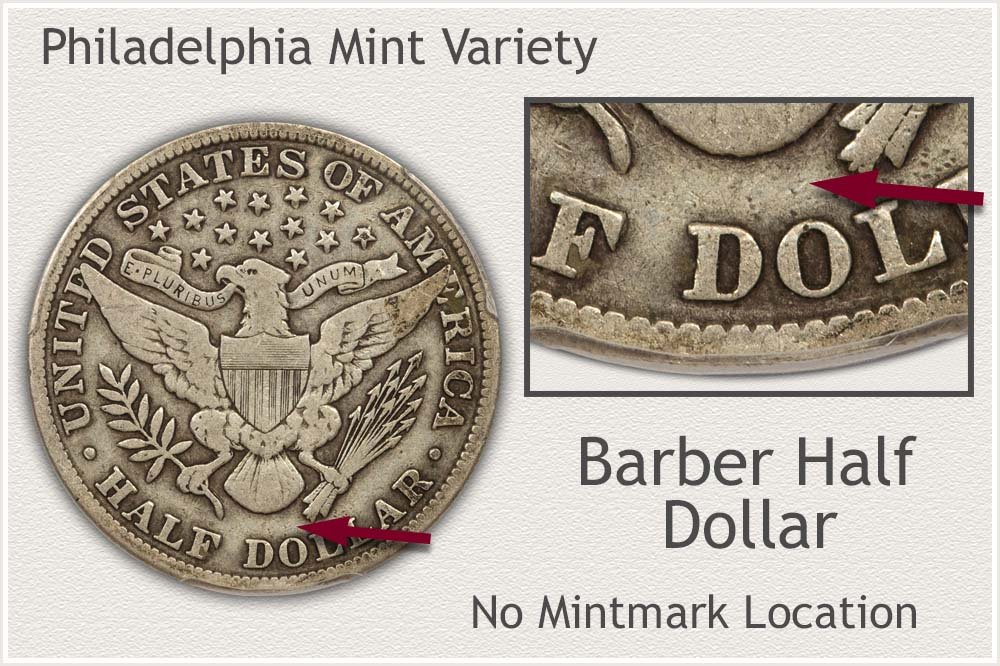 Philadelphia is the original mint of the US. Over 55 million Barber halve were struck by Philadelphia, largest number of any mint. Stand-out dates are interestingly the last years; 1913, 1914, and 1915. Mintages were low, less than 200,000 each year, and low numbers available today.

During the Barber half dollar series, the Philadelphia mint did not use a mintmark. No mintmark in the area below the tail feathers of the eagle and above "DO" in Dollar is a coin struck at Philadelphia.

Searching through your coins for rare dates and rare mintmarks occasionally yields results. However, don't over-look the impact "condition" has on your Barber half dollar value. Collectors and dealers first evaluate the state of preservation of a coin, assign a "Grade" and then use this to help determine value.

Barber Half Dollar Value is Conditional

On the obverse look closely at the headband. All the letters to LIBERTY showing separates a coin in "Fine" condition from a coin in the lower "Good" grade. Hopefully at least one or two of your coins are crisp and sharp in all details reaching to "Extremely Fine" or better condition.

Compare your Barber Halves to the grading images below. 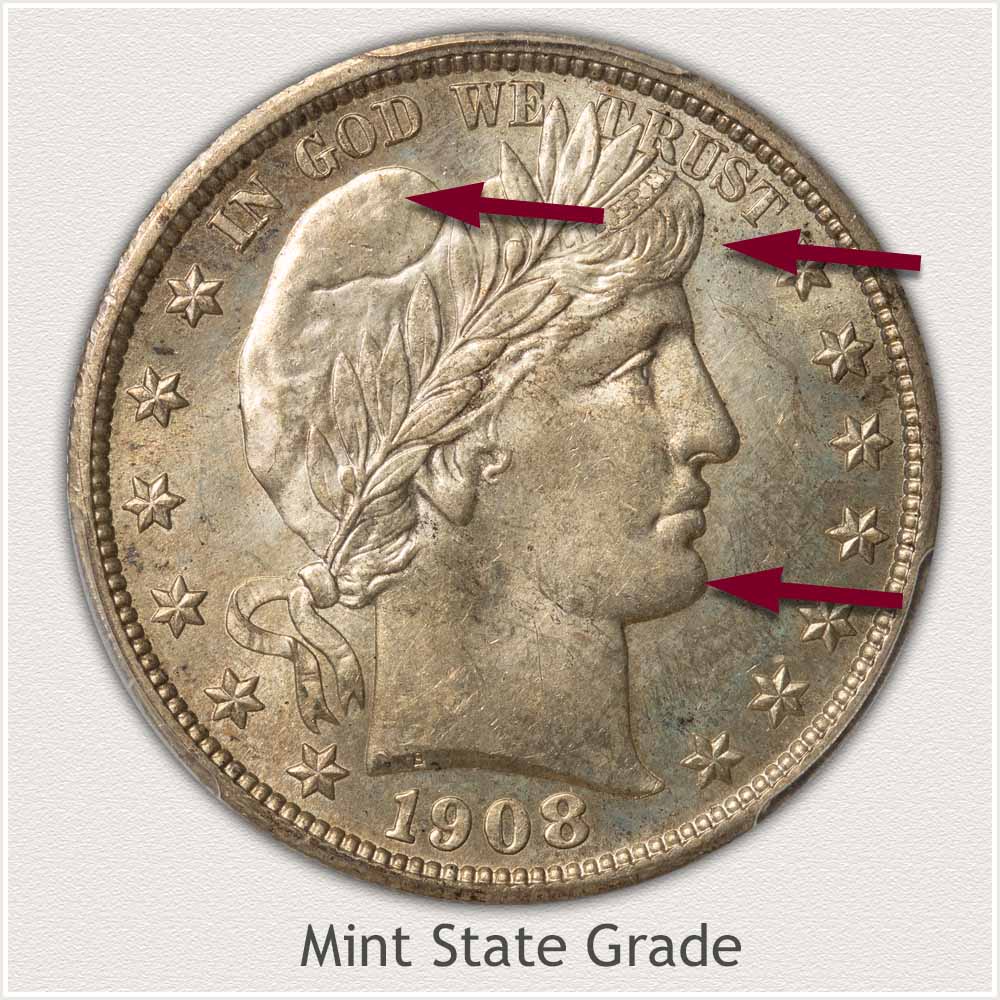 Obverse: Features Identifying Mint State Grade: To qualify as Mint State grade; no wear is seen on the surface of the coin. High areas and open areas are inspected to determine if a coin has circulated and received any loss of metal.

Liberty's cheek line - an open area - remains covered with original luster. From the chin to ear the surface is a consistent texture.

Fine lines of hair are just above Liberty's eye and prone to wear. All hair curls and waves remain without any dullness caused by wear.

The Liberty cap features a large fold and just above the cap remains with a luster and texture matching the rest of the cap. 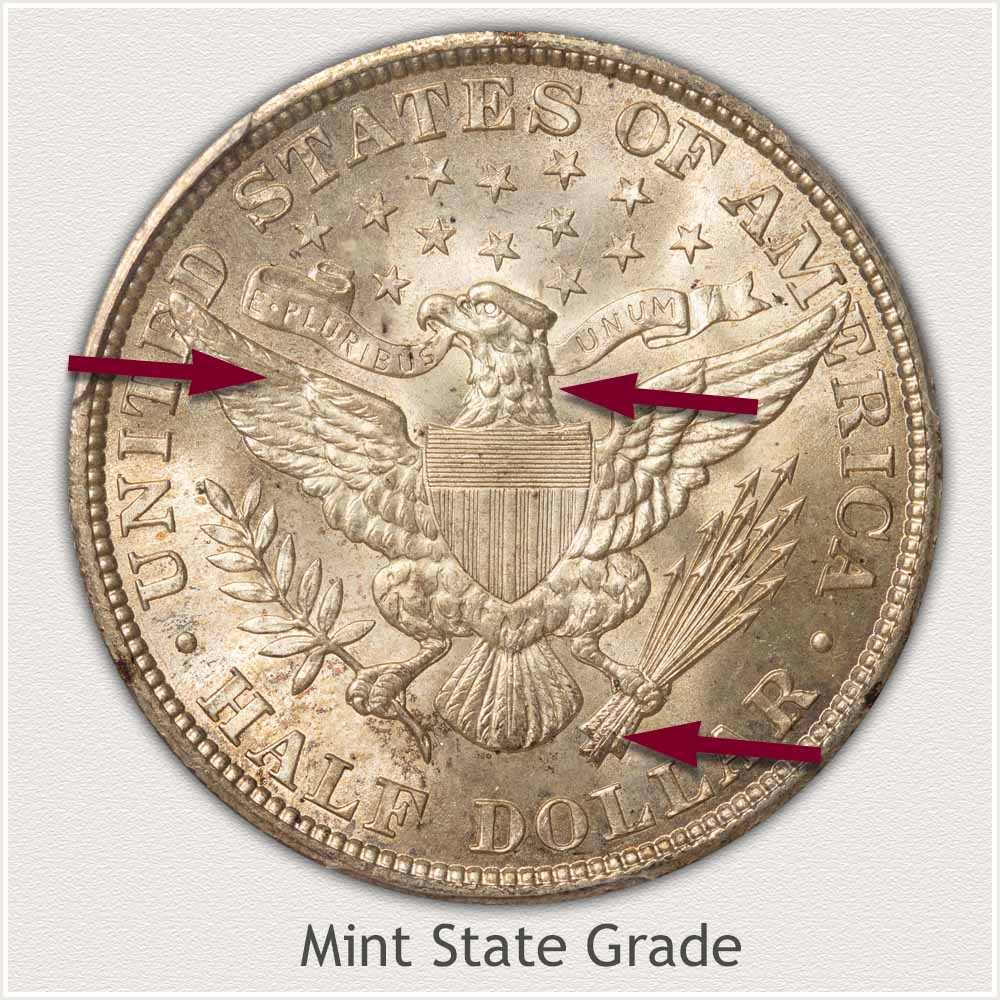 Reverse: Features Identifying Mint State Grade: Mint luster is a delicate surface allowing a coin to shine and shimmer in light. This fine grain surface shows wear by a smoothness and dulling to the surface. Judging areas prone to wear determines the Mint State condition. Many fine details are present in the eagle central to the reverse.

Wear occurs first towards the center of a coin. Inspect the neck feathers just above the shield. These small details remain with a texture similar to texture deep within the details of the wings.

Along the top edges of both wings no evidence of smoothing to the metal is evident. Continue to the very tips of the wings as you judge for wear.

Look closely at the fine details found in the tail feathers. No smooth spots are evident and a nice texture of luster remains. 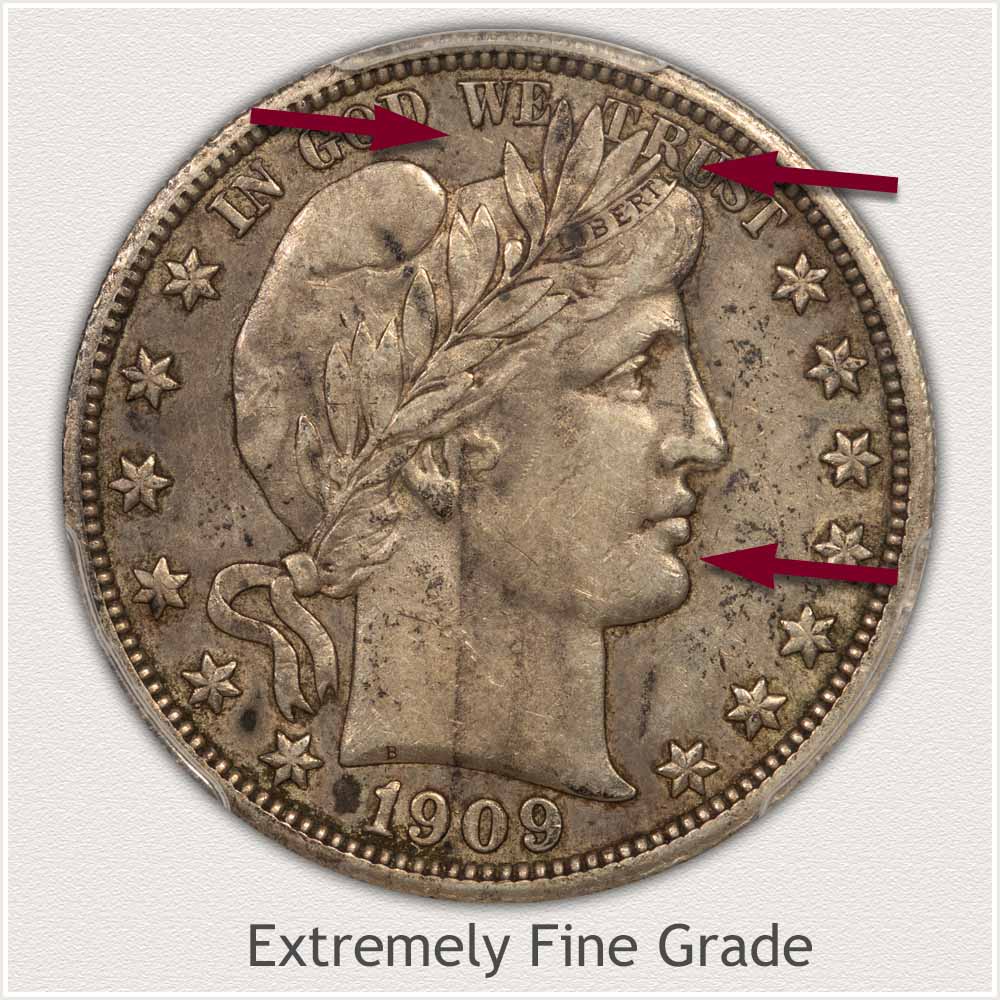 A universal marker defining the grade is all letters of "Liberty" are clearly visible on the head band just above the forehead.

Also important is a bold edge to the ribbon displaying the letters of "Liberty". Both top and bottom edges remain complete along their length. Note: due to striking differences the bottom edge is often faint below the letters "E and R". If the lower band is weak below "ER" the rest of the surfaces must present as Extremely Fine in condition.

Laure leaves tied with a ribbon are bold, wear is evident but flattening is only at the ends. Edges of leaves are bold and well defined, separate of hair. 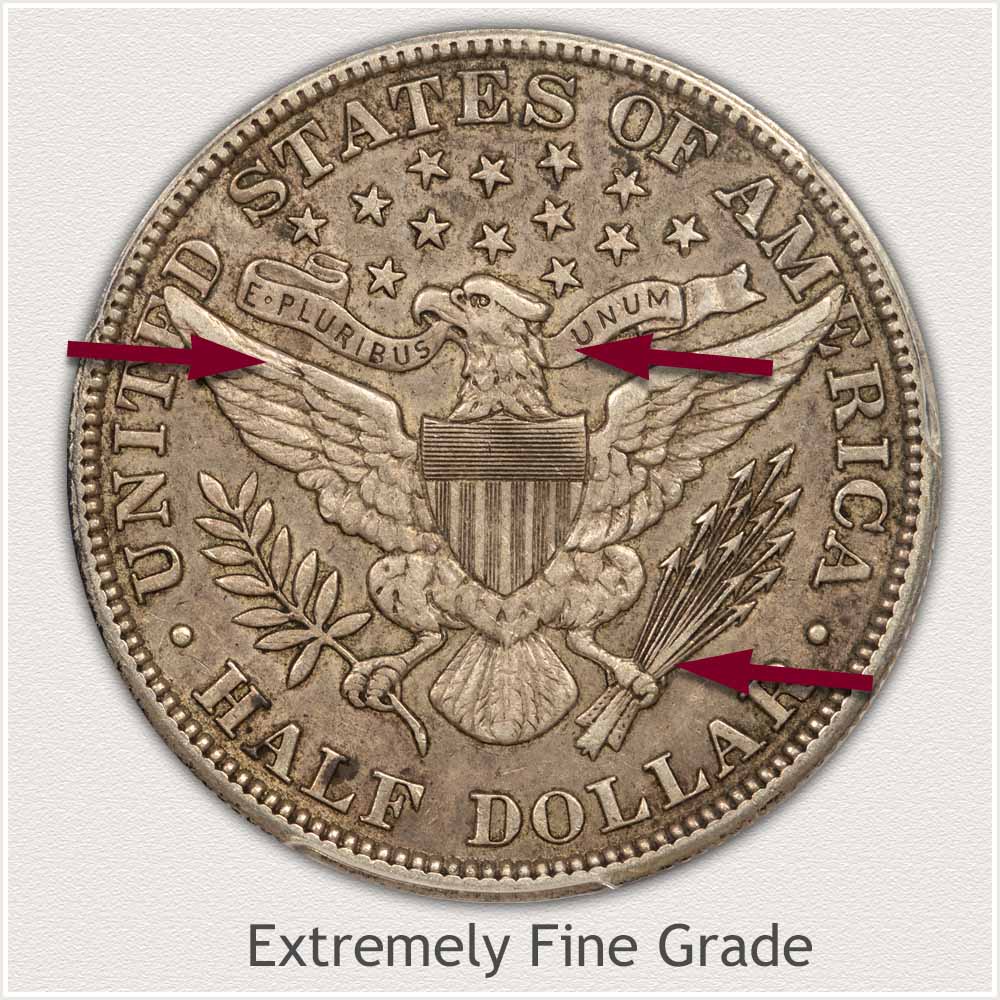 Wear is showing on the Eagle's neck feathers. Flatness is confined to just two small disconnected areas at the top of the neck contour.

Alone the upper edges of the outstretched wings are areas of flat metal extending from the shield to wing tips. The majority of flatness is along the upper edge.

Feathers are clearly defined with no merging of feather lines.

Claws remain with the majority of their contours defining the leg from the claw.

Looking closely at the arrow shafts, all are separated from claw to arrow points. 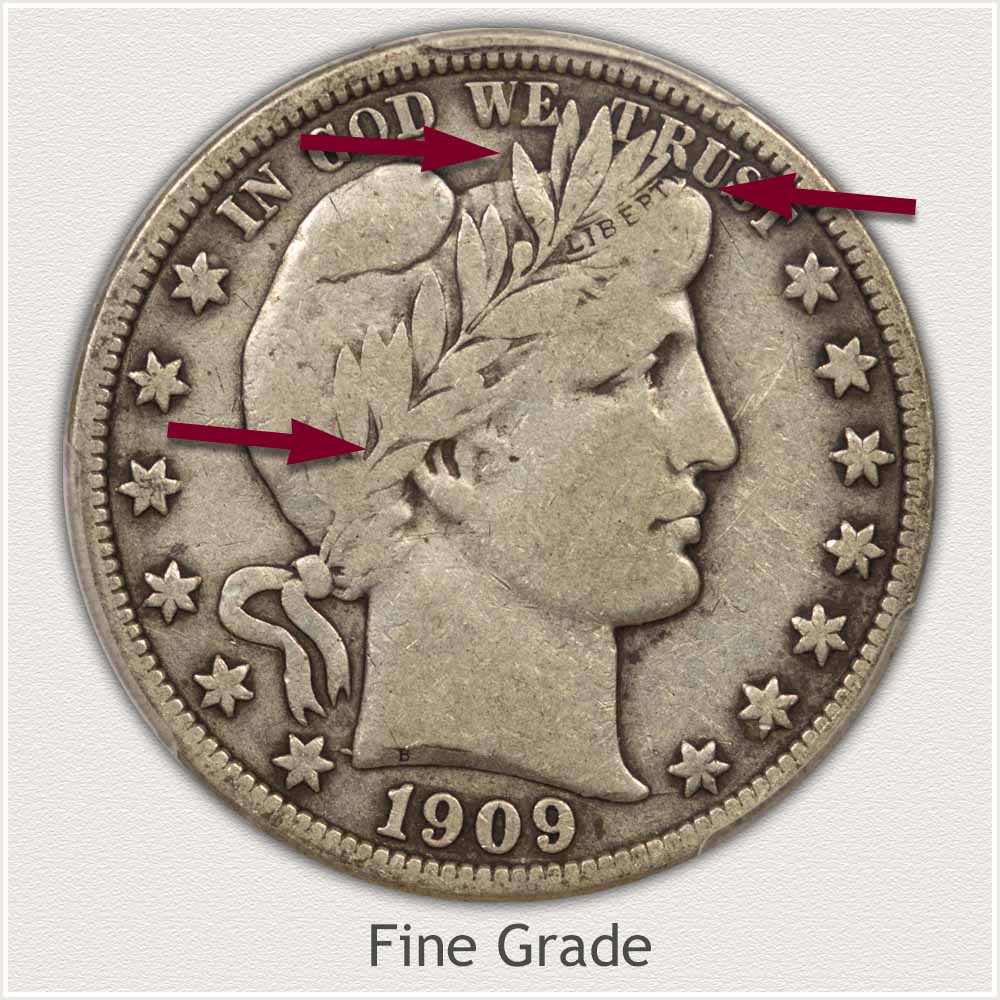 Identifying the Fine grade is all letters of "Liberty" in the headband visible. Bottoms of letters are faded in places, notably "E and R".

Liberty's hair line below the ribbon is smooth with a few strands of hair visible.

Upper laurel leaves are well defined with distinct edges. No merging with the cap

Flatness to her cheek is minor. A bold separation remains from neck to cheek.

Reverse: Features Identifying the Fine Grade: Wear has reduced the eagle design with most wear towards the outer edges. Central areas of the eagle are well detailed.

Notice a continuous smooth zone from the head of the eagle to the shield. This flat spot only involves the central part of the neck leaving a raised contour to the field of the coin.

Wings are smooth towards the tips of wings with many feather details near the shield.

Horizontal lines within shield are weak or missing, especially along the top and right corner. 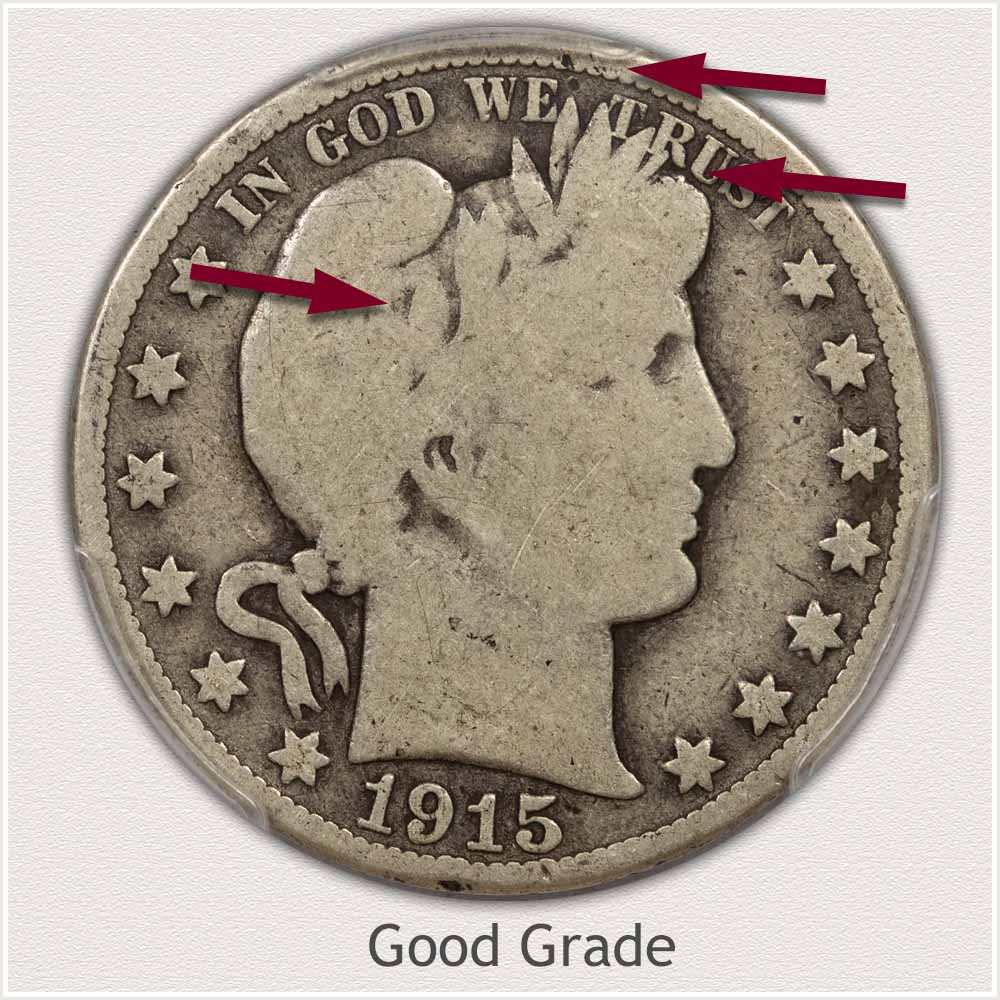 Obverse: Features Identifying the Good Grade: A strong portrait of Liberty remains, well outlined and bold from the field.

Letters of "Liberty" and the headband are now smooth and continuous with forehead.

A few traces of leaves are visible above the ear.

Stars are complete and raised from the field. Rim is separated from stars.

Letters of legend are complete with fading only near the rim. 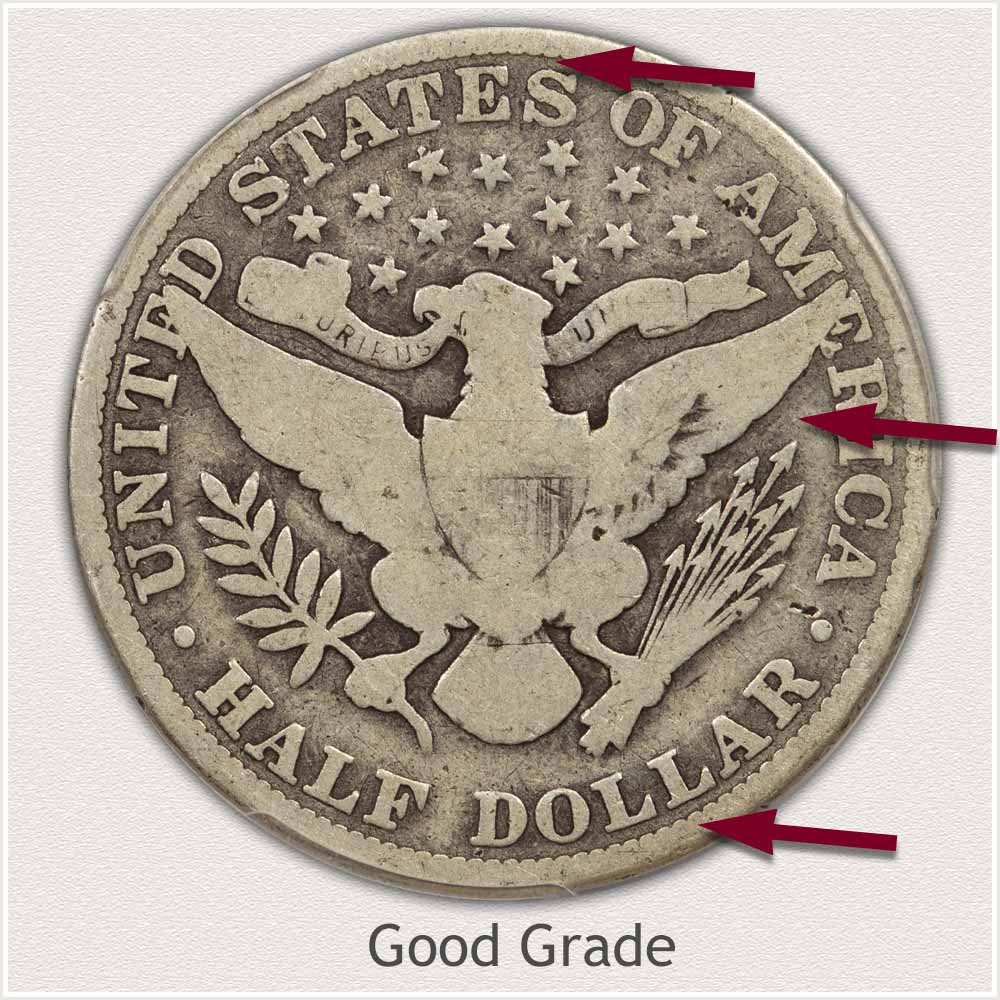 Lettering along the rim is mostly clear with only minor fading.

Rim is defined in most areas and merging with letters is confined to tops of letters only.

How to Video: Grading Barber Half Dollars

Grading a coin is not an exact science. It is your opinion, dealers and collectors have their own opinions... and they can all differ slightly.

Close-up images plus descriptions help judge and narrow the grade of Barber half dollars. Condition is key in discovering market potential and value.

Keeping in mind the heavy silver content of these half dollars and a premium because of availability, there is a solid base value to these coins. All Barber halves are worth well above face value. However; many still trade based on movements in the price of silver. It is the lower condition coins and common date and mintmark combinations, still available in quantities, that go up and down with the swings of silver. Current as of 9/14/2020 a bullion quality Barber half is worth $15.21 .

Breaking away from base silver value are coins in pleasing collector quality. A distinct difference in the aesthetic appeal is found in Barber halves grading Fine or better. Wear is moderate in Fine grade leaving many subtle details of the design visible. Completeness of the laurel leaves and lettering in the headband gives the obverse an overall pleasing appearance. In Fine and better quality, the eagle on the reverse is well detailed and sharp.

Every Barber half dollar is valued well above the movements of silver bullion in Fine grade. Key points to recognize are defined edges to laurel leaves around Liberty's ear. Letters within the headband must show, although faint "Liberty" is readable, usually the "BER" is faded. Clearly visible lettering is a solid collector quality Barber half dollar, scarce and highly valued.

Many outside factors contribute to your Barber Half dollar value. A popular series year after year, seasoned collectors are always improving their holdings. New collectors arriving, all leads to demand and higher values. Your old coins continue to gain in value. Check back here to stay current.

Many of your old US silver coin values are tied closely to the price of silver. Silver dimes, quarters, half dollars, and silver dollars are all heavy with 90% silver and worth many times their face value. With today's high price of silver your old coins are becoming surprisingly valuable.

Understanding value of your Barber half dollars is a great first step to successfully selling these coins. Resources helping find markets is the next step.

Print the Coin Values Worksheet to list your Barber half dollars and record their values. Should you decide to sell... use the worksheet as an invoice and packing slip when sending coins through the mail to dealers. It indicates you have done your coin values homework.