A large and diverse selection of coins represent the different U.S. coin series. Collector interest and trends in popularity change, adjusting with the times. A study of Registry Set collections is used to shed some light on current interests.

Is there a popular coin series leading far ahead of the rest? How are the different coin series positioned when compared to each other?

Coin collecting takes many forms, many approaches, and many levels of involvement. Different series attract collectors for a variety of reasons. Design and size of the coin, metal content, availability, affordability, and popularity are all possible considerations.

Denomination is often a focus of collectors. 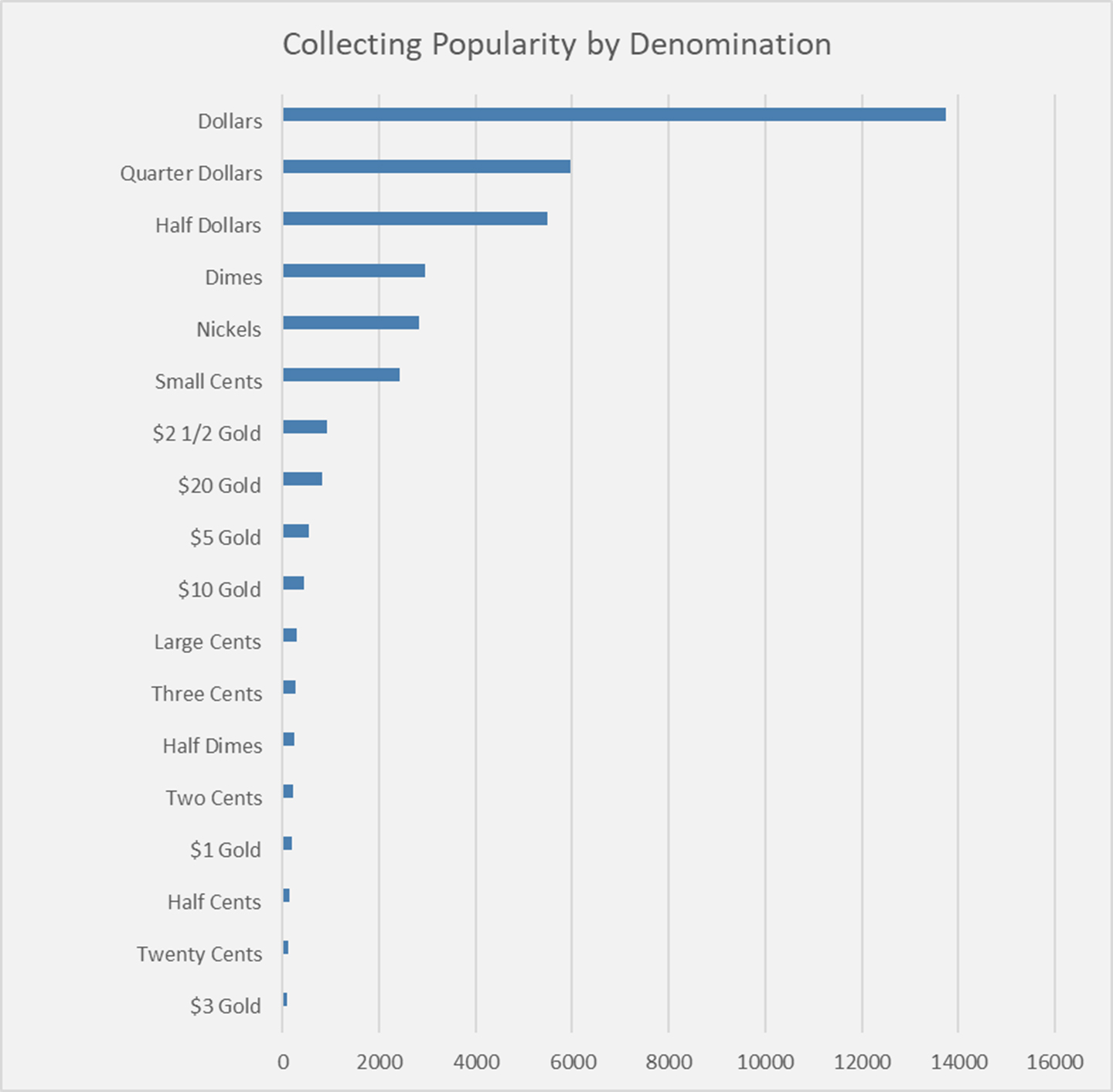 Interest in Collecting U.S. coins has chosen the Dollar Denomination as first pick in popularity. Non-silver dollars and the older vintage silver dollars occupy two of the top four positions.

Comparing the number of sets listed per category is used to indicate popularity of a specific series of coins. How popular a denomination or series is when ranked against all others is presented in graph form. Finding the number one popular coin series.

Denomination is the face value of the coin and Series are different major designs found within each domination.

Combining data of PCGS Set Registry and NGC Registry programs provided numbers of sets totaled by denomination, series, and themes within a series.

One characteristic of the Registry programs is the variety of themes within series allowing different ways of building sets. Problematic is different themes, all subsets of one collection, can qualify and count in multiple categories. Gathering data using a defined category, one typical to all series, filters out overlapping set numbers within a series.

Two specific theme definitions were chosen to draw data representing a series. Coin Sets encompassing the entire series in circulation issue and secondly in proof issue were singled out. Specific categories are:

Number of registered collections per series is organized to gauge collecting interest. Beginning with a broad question, popularity ranking of denominations. In addition, series within a denomination are studied and placed in order of popularity. Further studies compare multiple series to each other. 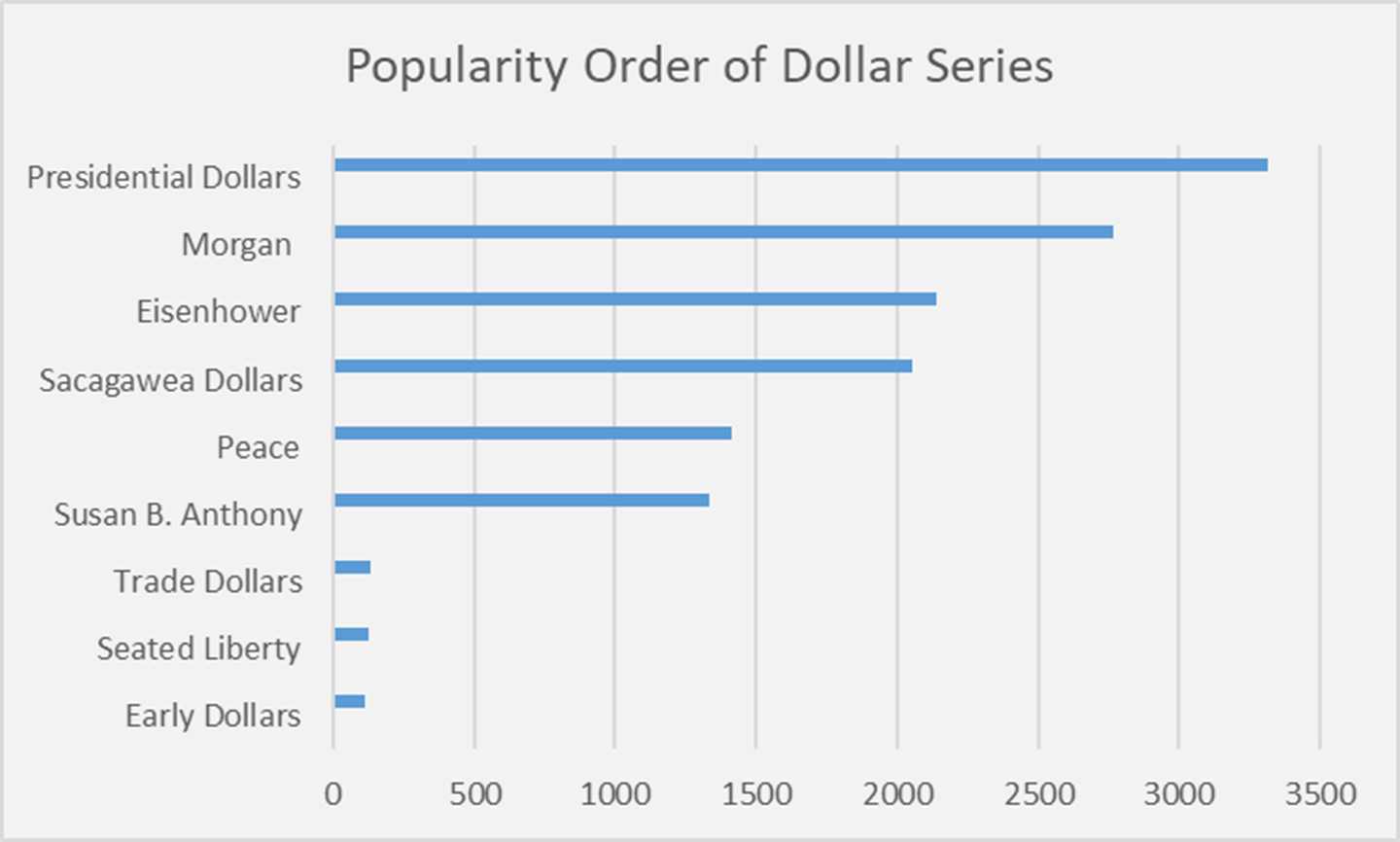 Popularity Order of Half Dollars Series 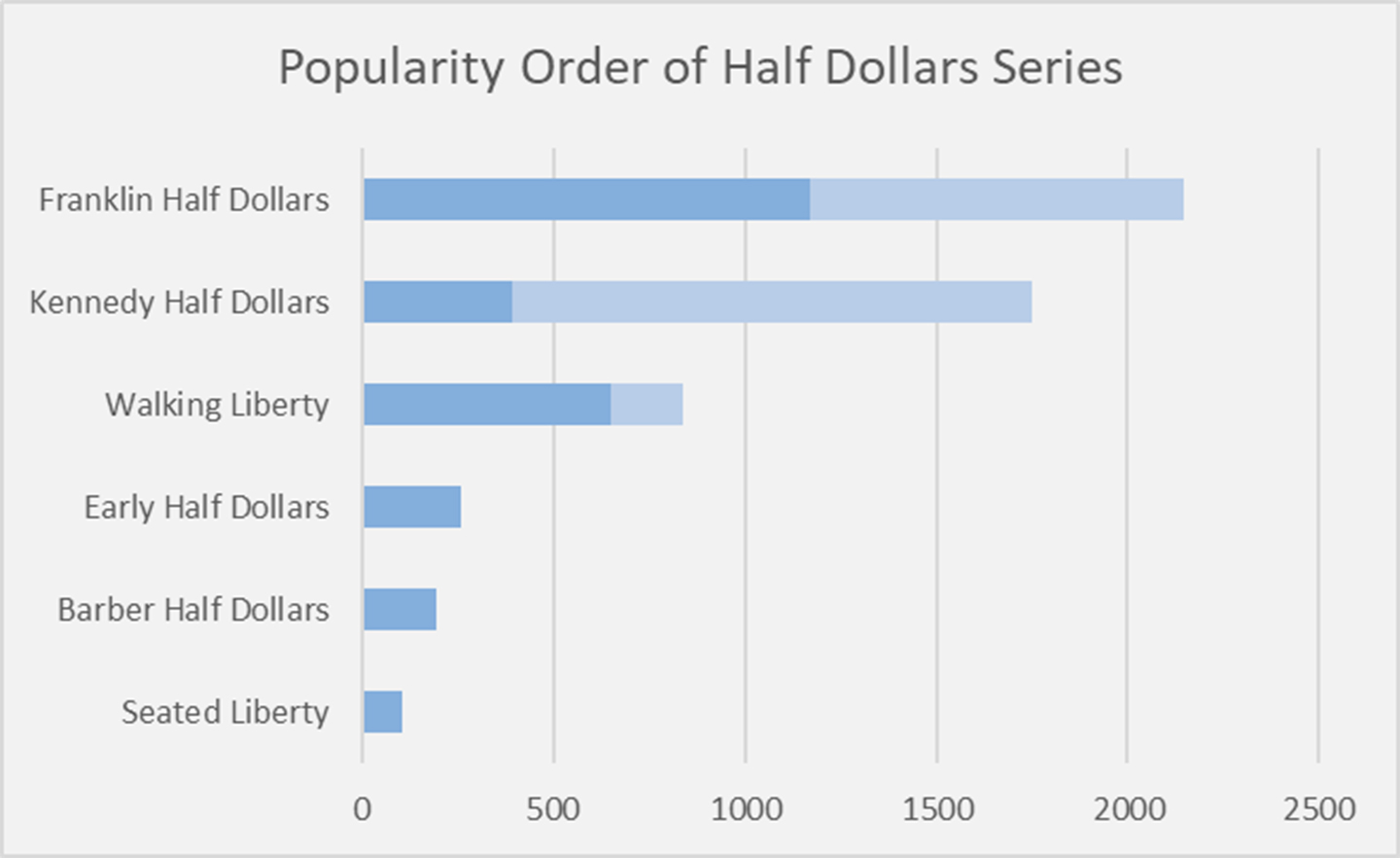 Vintage era Franklin Half Dollars lead in popularity over contemporary Kennedy half dollars. 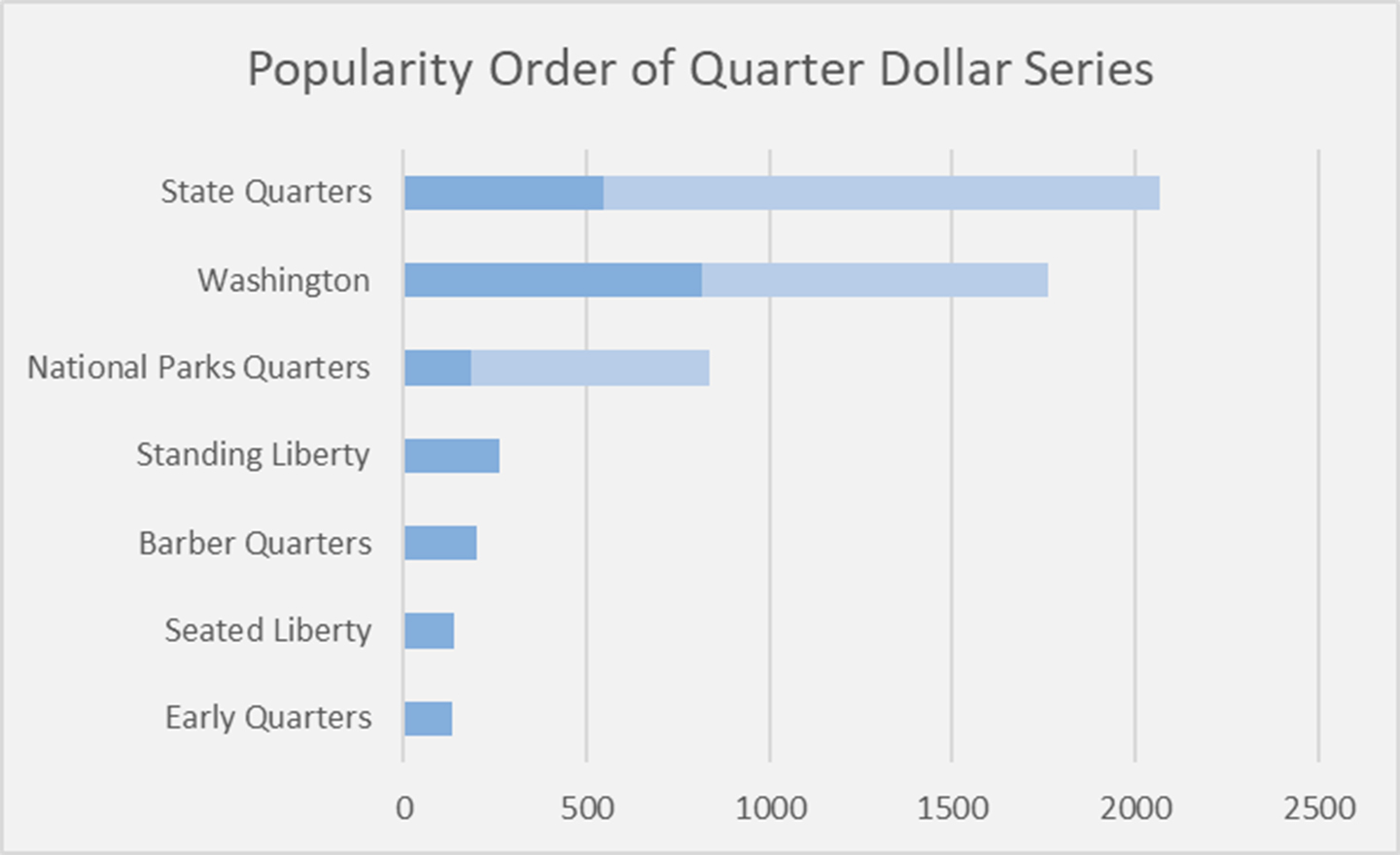 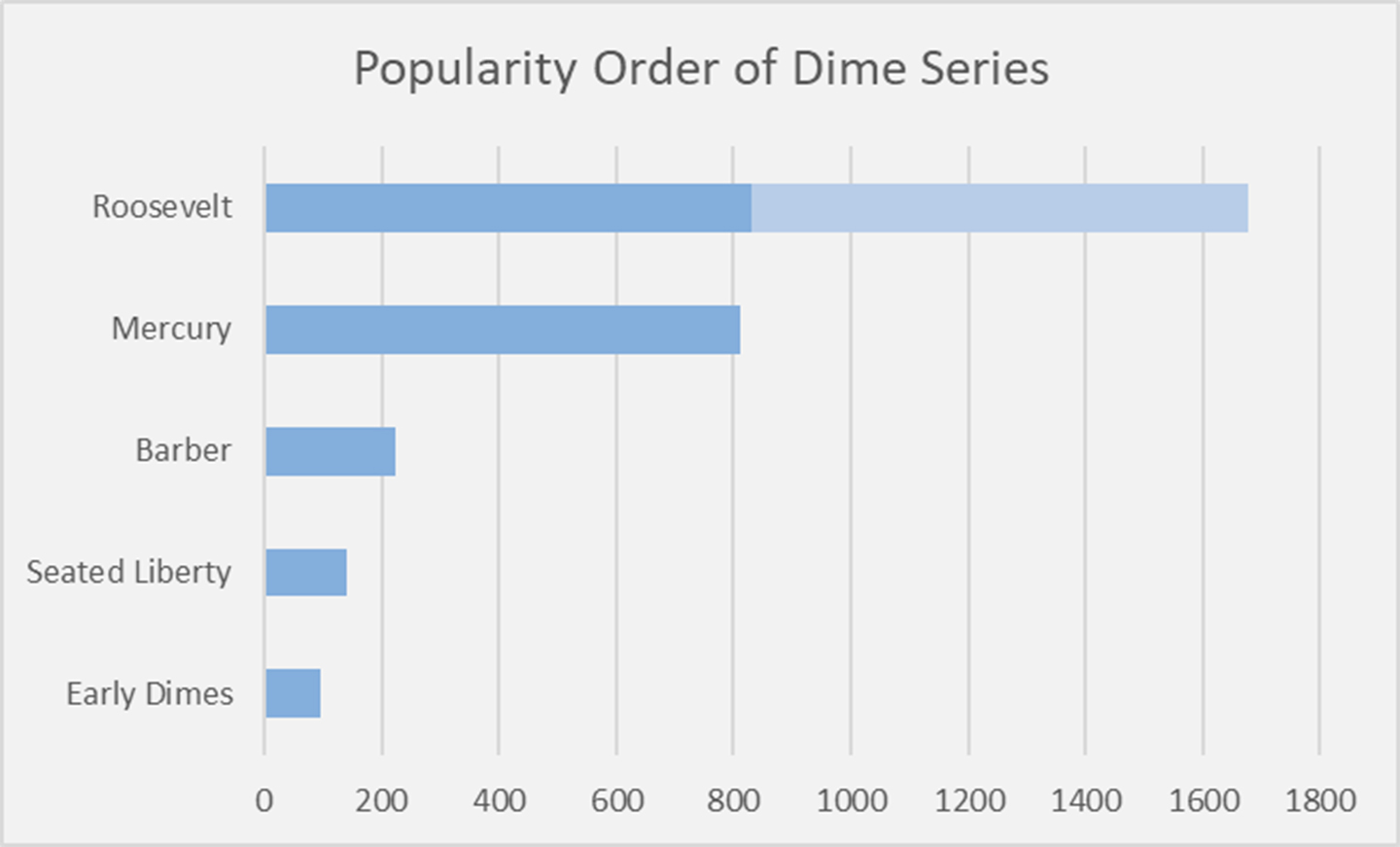 Leading in popularity are Roosevelt Dimes. When comparing just the silver years of Roosevelt dimes 1946-1964 they are just ahead of the Mercury dime series. Dark blue represents 1946-1964 sets, light blue along the Roosevelt bar represents sets with a focus on coins dated 1965 onward. 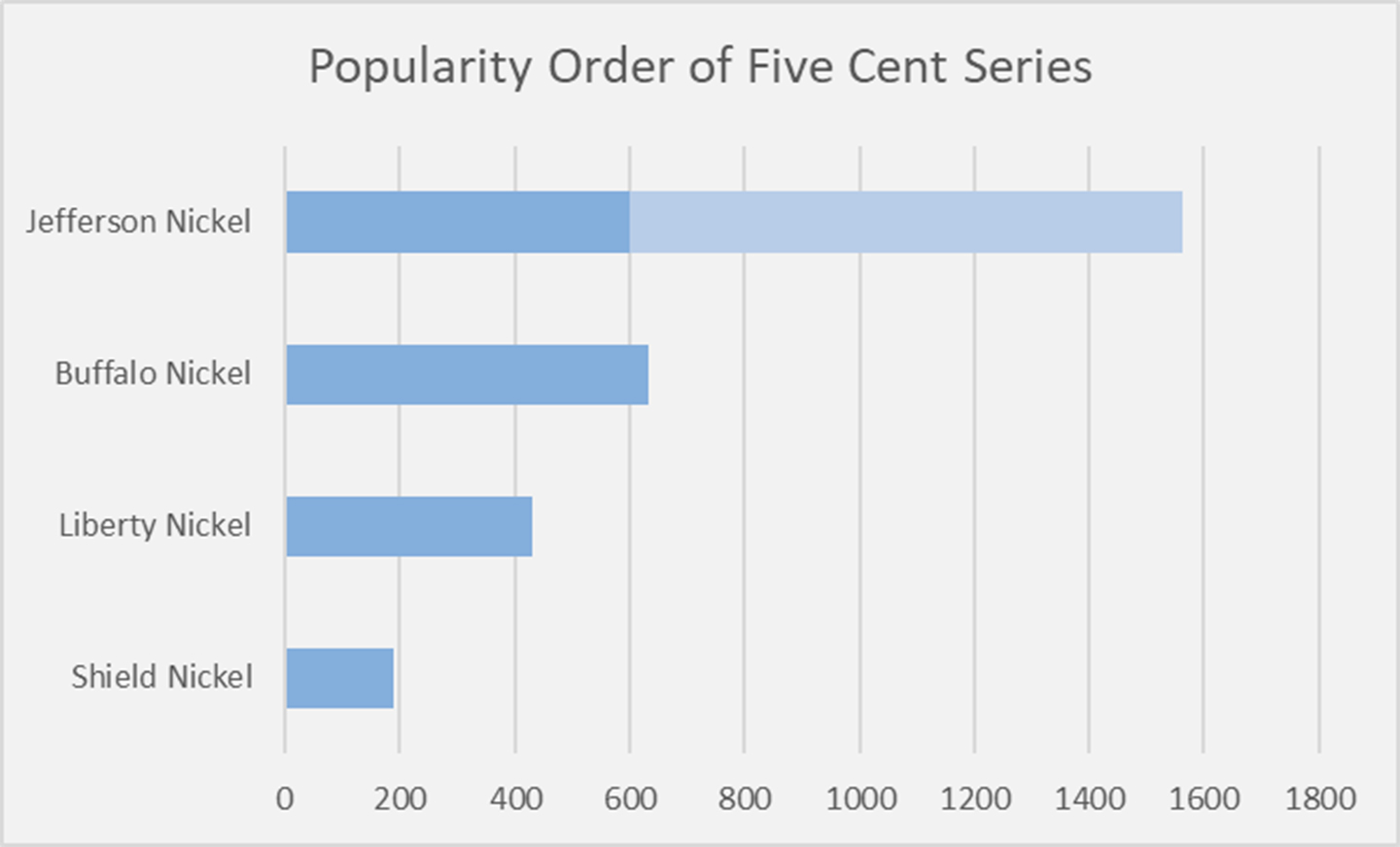 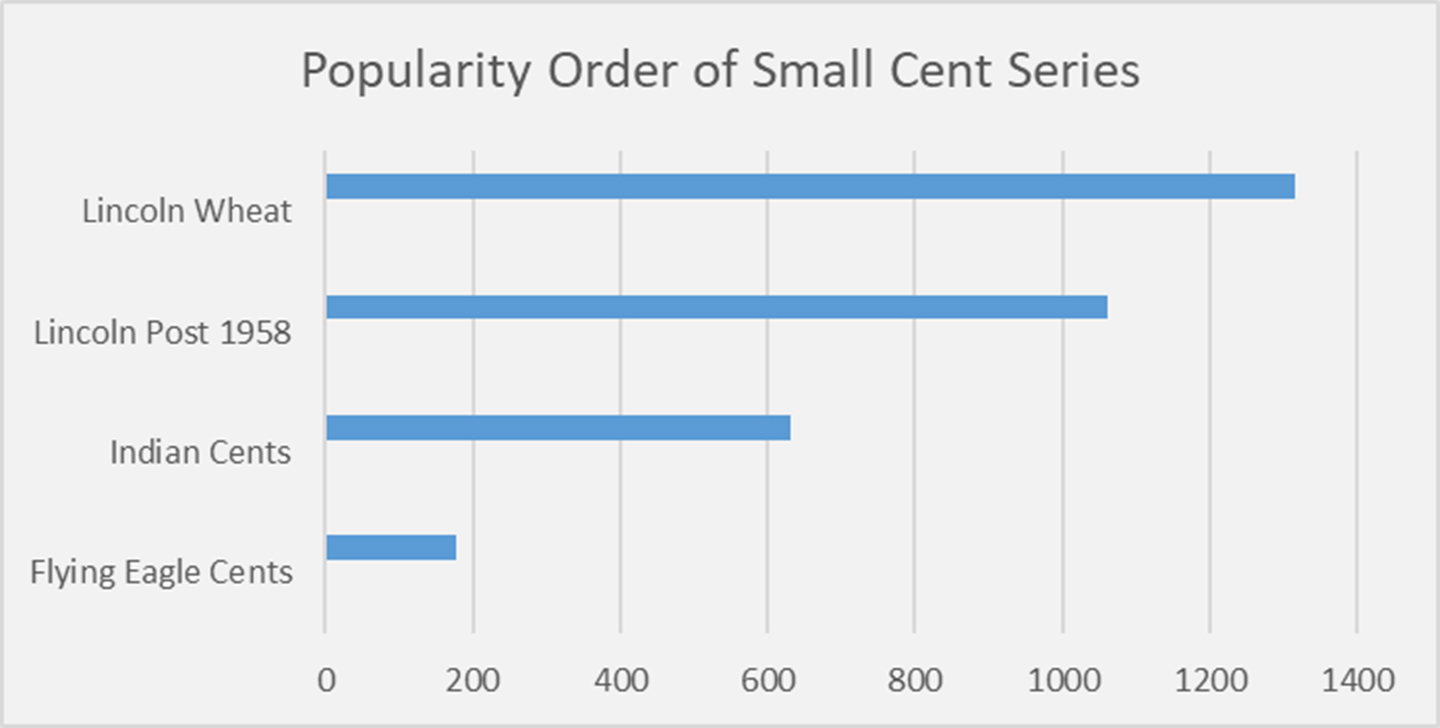 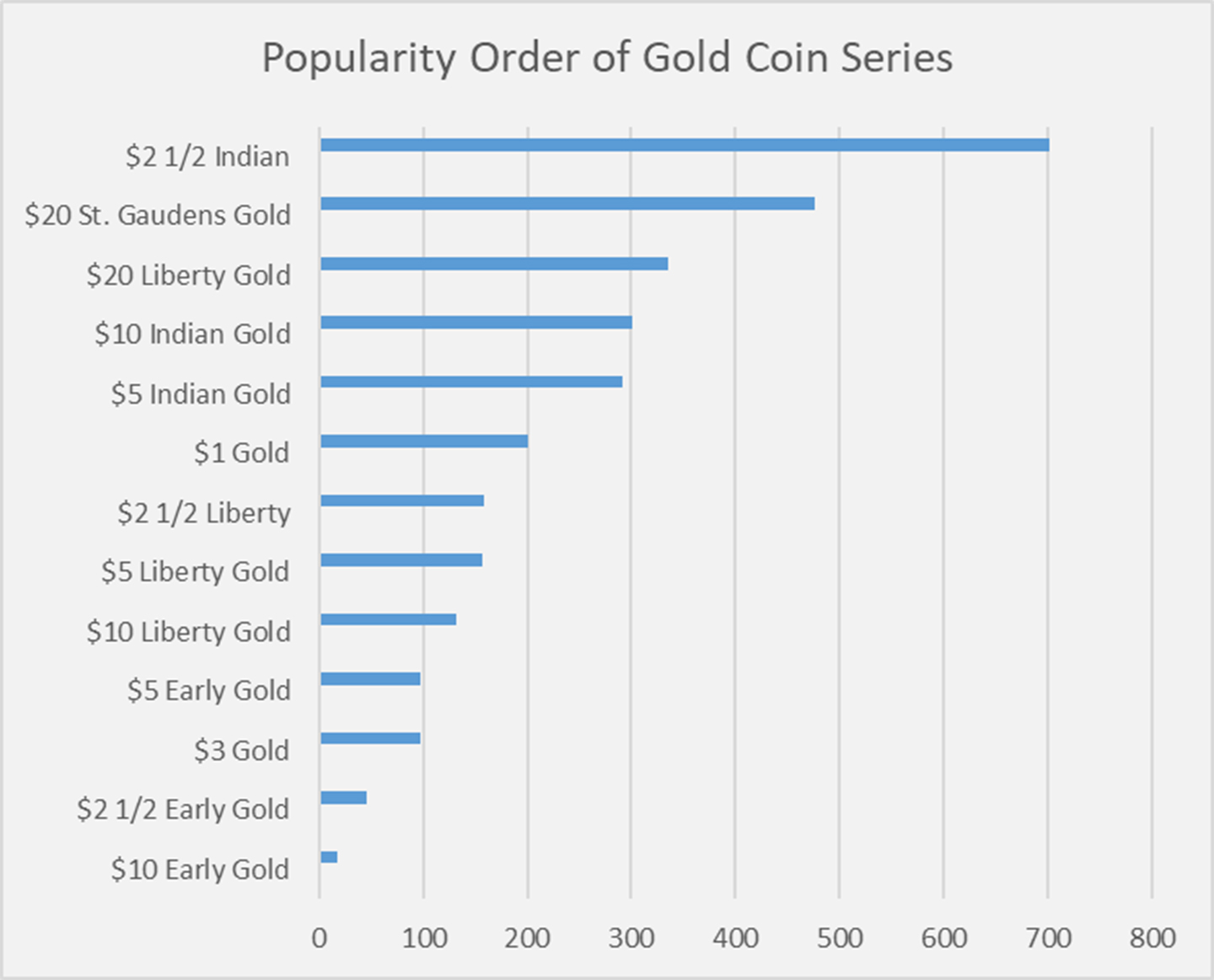 Small in size, iconic in design, $2.5 Indian gold series is a favorite among collectors. Saint Gaudens placing second, another series noted for a stunning design. 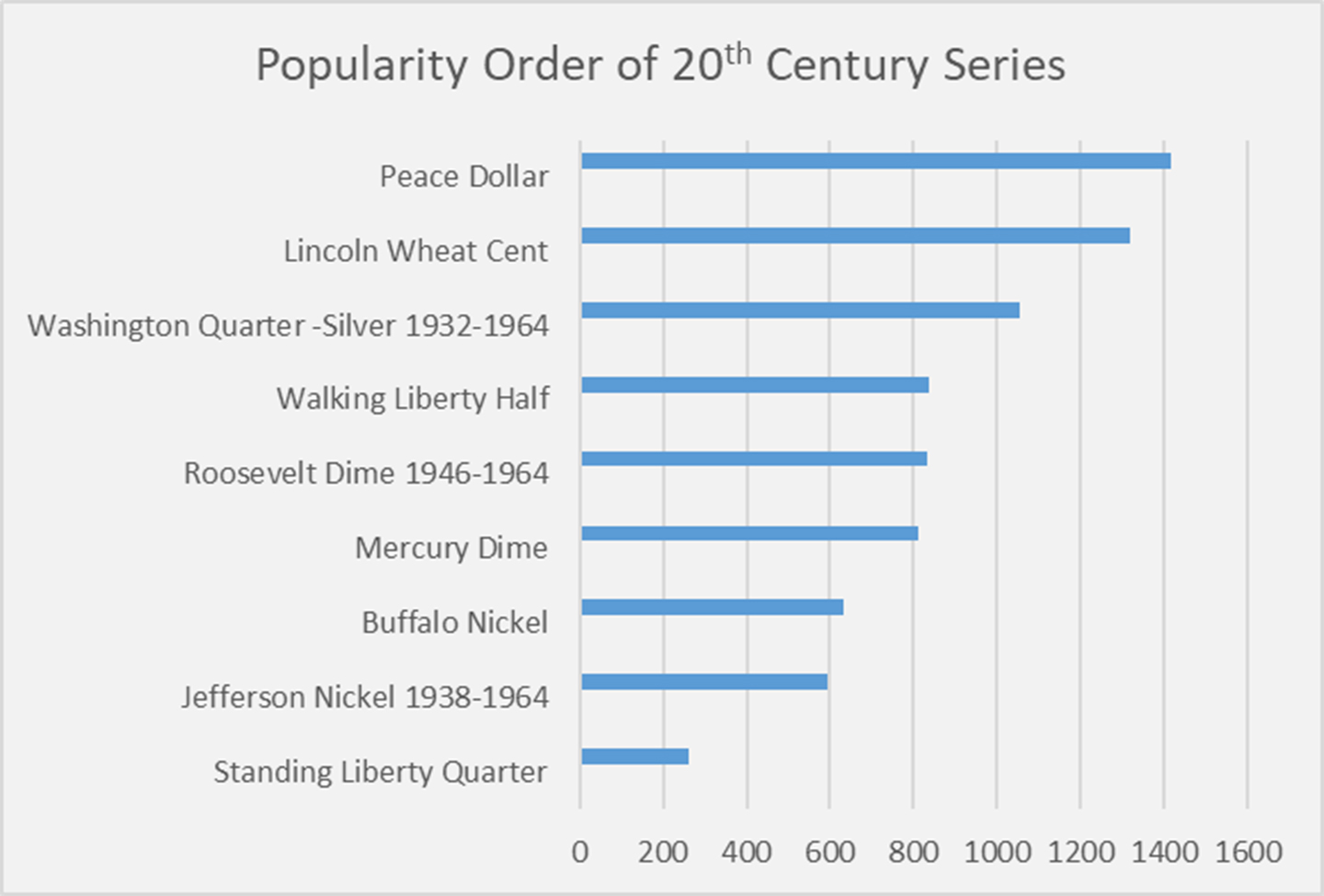 Series representing the 20th century when placed in order of popularity raises Peace Dollars to the top. Silver issues of Washington Quarters 1932-1964 and Roosevelt Dimes 1946-1964 are included in the study, along with vintage years of Jefferson nickels 1938-1964. Defined sets are formed of these span of years. 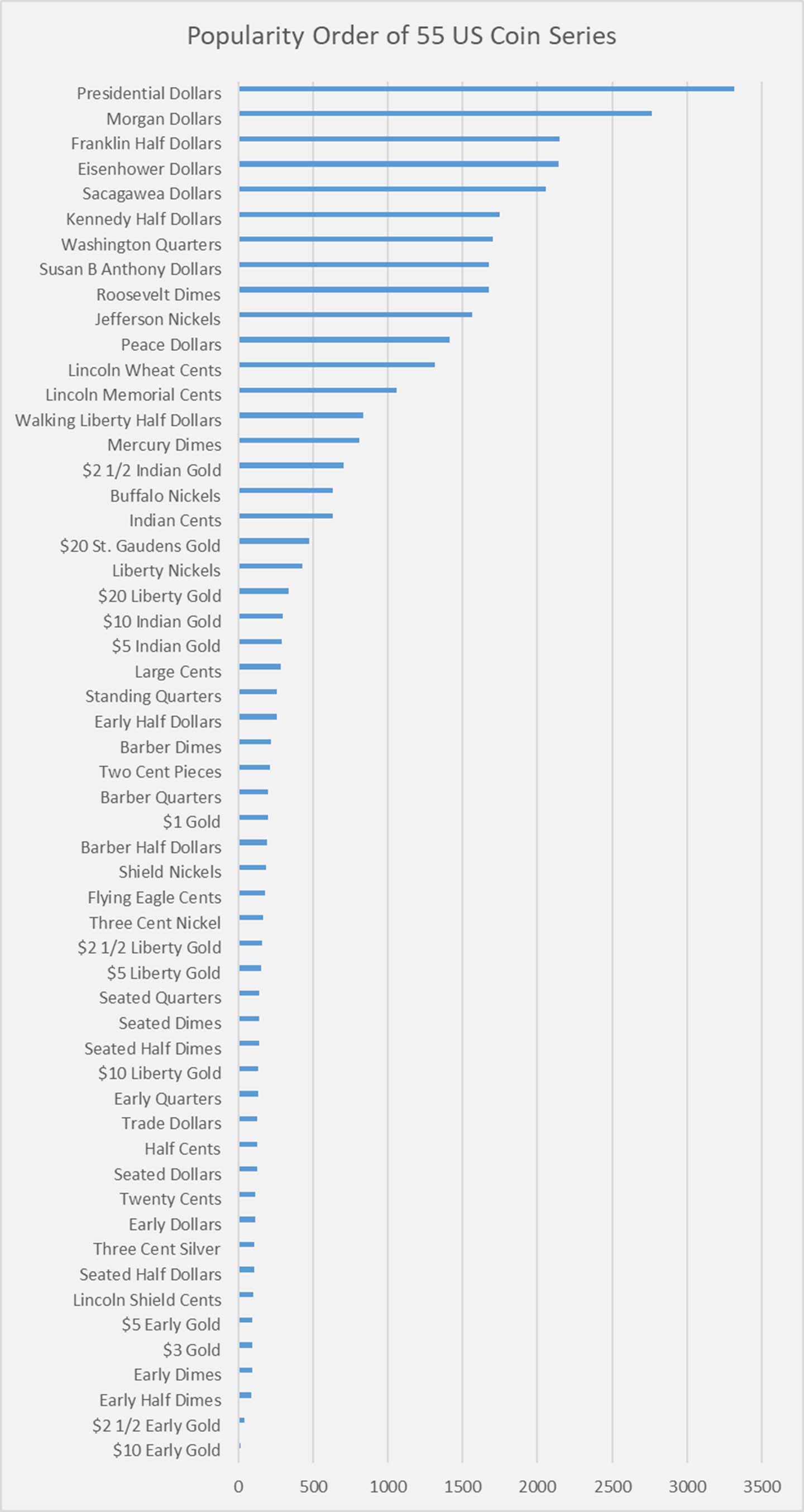 A wide mixture of popular coin series are found in the top 20 positions. Gold coins are represented twice. Seven series are silver alloy. Denominations and sizes of coins are varied. Many eras are also found; Morgan dollars in the second spot date back to 1878. Presidential dollars in first place were minted 2007-2016.

Comparing rankings of the 20th century chart to their standing among all U.S. designs finds a group of popular coin series notable for their large size and long history. Morgan and Peace dollars in the size category, Lincoln cents, Jefferson nickels, and Washington quarters spanning decades. Notable is the presence of modern coin series.

Dollars lead as first choice of collectors. The many designs minted over the years, plus a large variety of collecting themes has attracted involvement. Presidential Dollars are currently the number one popular coin series.