Reviewing the chart shows modern Jefferson nickel values are gaining a premium in mint state condition. Note additionally, most dates and mints are priced similar in a narrow range. The important step is to identify if your coin is a collector grade, in both condition and special qualities.

Minted in large quantities, Jefferson nickels dated post 1965 are available and affordable in mint state - no wear to the surface - grade. These are the coins sought by today's collector. Follow the steps to identify quality coins and determine how much your nickel is worth in the market.

Values in the chart represent average retail prices of single coins if you were to purchase them from a dealer.

Beginning in 1966 both subtle and major changes have taken place with the design of Jefferson nickels. These differences are sub-types within the series adding collecting interest. Future value follows these changes dividing the series into collectible themes. The current division of eras; Vintage and Modern has the potential to change in the future.

A high relief design continues with Jefferson nickels in 1965. Both obverse and reverse remains the same as in previous years starting in 1938. A small change in 1966 added the designer's initials "FS" to the obverse just under the portrait of Jefferson. 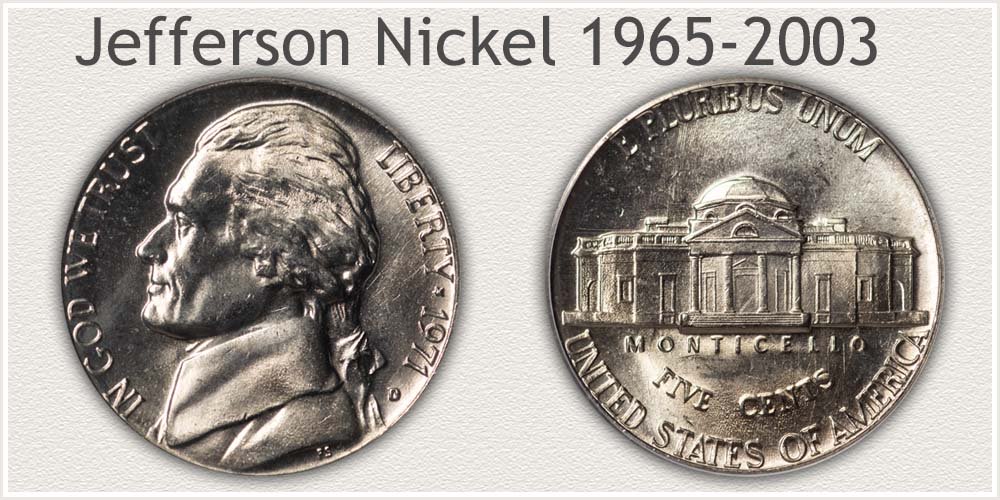 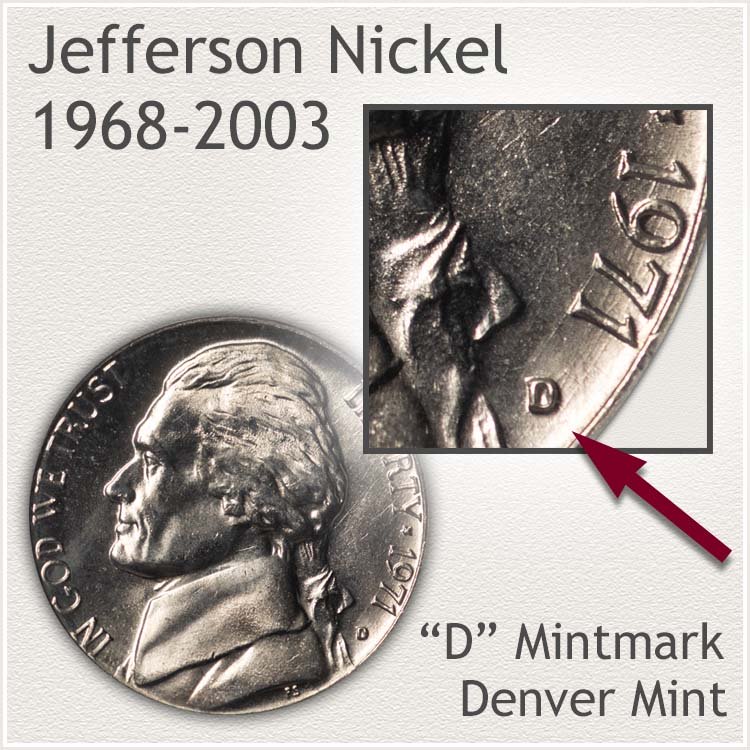 Denver mint uses a "D" mintmark to identify its production. Beginning in 1968 the mintmark was relocated to the obverse just past the date. 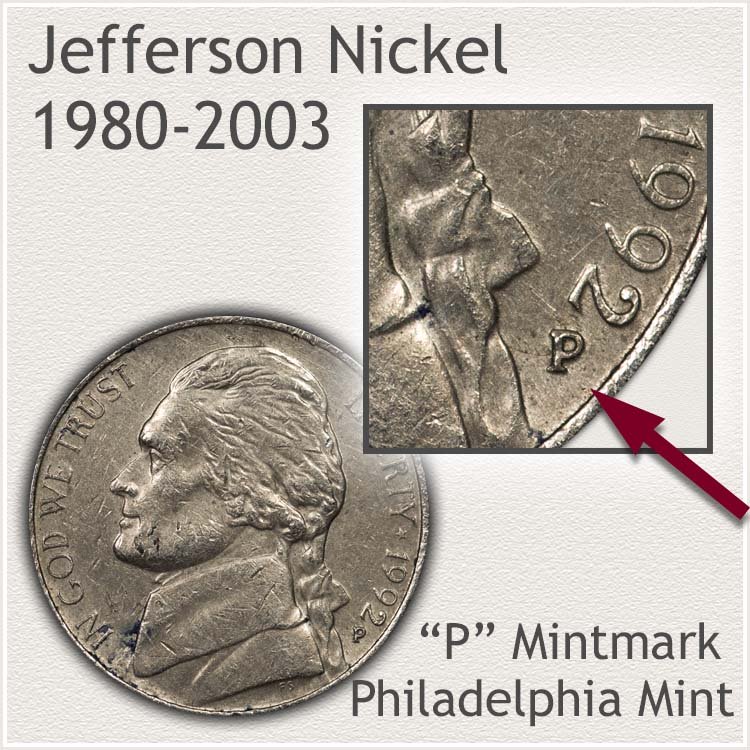 1965 to 1979 Philadelphia did not use a mintmark. Starting with the 1980 Jefferson nickel, Philadelphia placed a "P" mintmark on the obverse just after the date along the rim.

2004 began the "Westward Journey" series of nickels honoring the bicentennial of the Louisiana Purchase and the Lewis and Clark expedition. 2004 and 2005 included four designs struck and released into circulation by both the Denver and Philadelphia mints.

First is the 2004 Peace Medal reverse showing the design of the Indian Peace Medal. Lewis and Clark carried special struck medals and gave these to Native Americans along the journey.

Second reverse of the year features a keelboat with Captains Lewis and Clark. A critical means of transportation at the time, used to navigate and explore waterways.

2005 began the third reverse design in the "Westward Journey" series. The American Bison reverse recognizes its importance to Native Americas. Obverse is a new view of Jefferson facing left. Liberty inscribed on the field of the coin is based on Jefferson's own handwriting.

Second design of 2005 is Ocean in View; commemorates the arrival of the expedition at the Pacific Ocean in 1805.

"Return to Monticello" Variety 2006 to Present 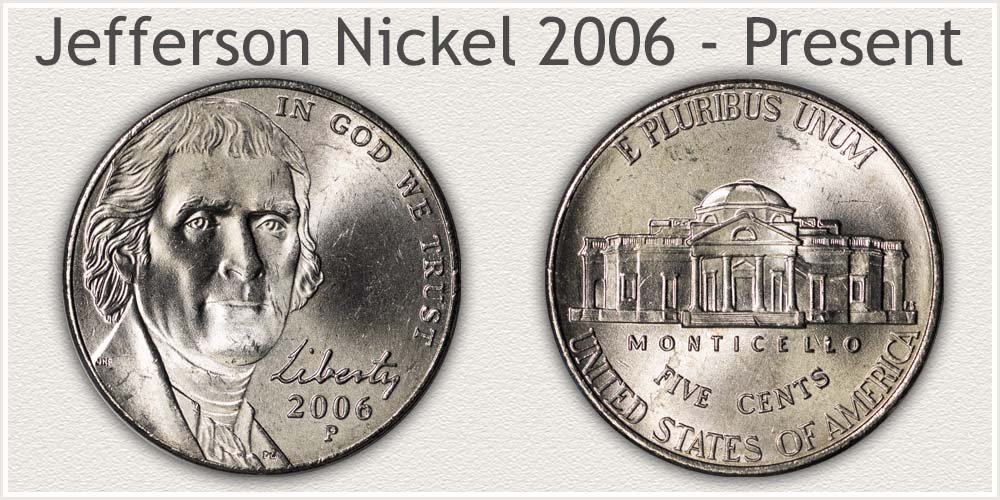 In 2006 a new design "Return to Monticello" began, and continues, as the ongoing design of the Jefferson nickel series. Jefferson is portrayed in three-quarter view as the obverse. Monticello is depicted as used on nickels in prior years returns to the reverse. 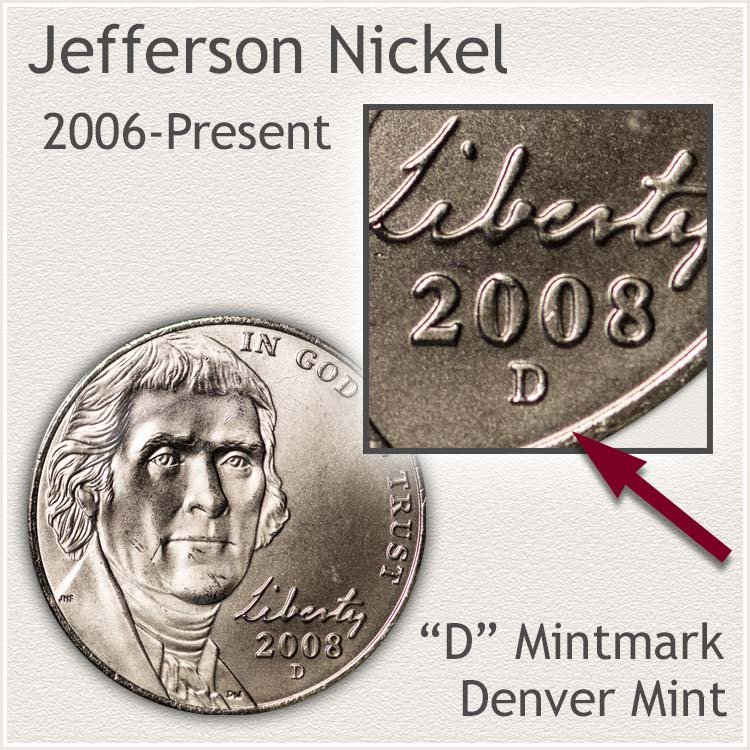 Denver strikes millions of these nickels yearly. Their production is recognized with a "D" mintmark just under the date. 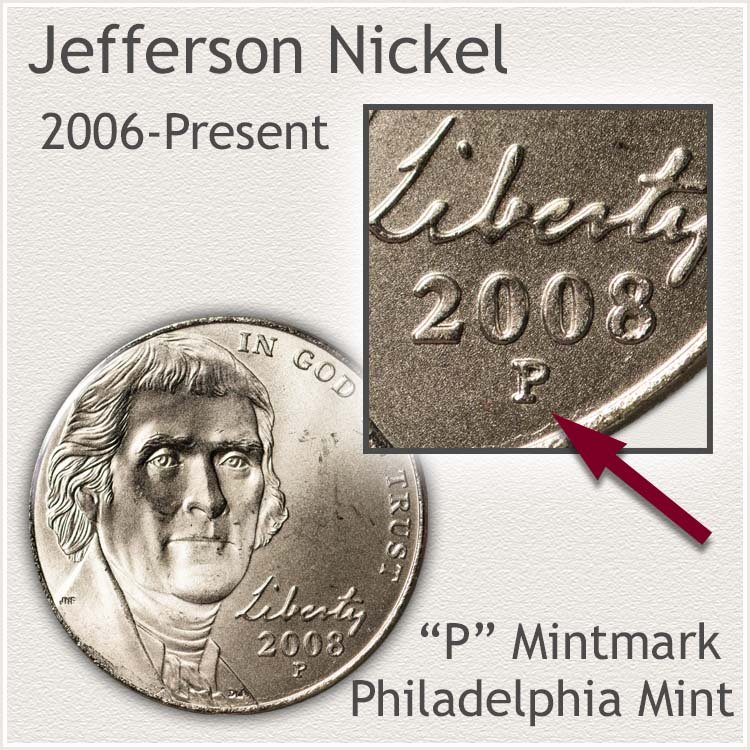 Philadelphia mint adds to the supply of nickels, striking additional millions of pieces a year. Maintaining what started in 1968, Philadelphia now identifies it production with a "P" mintmark just under the date.

A big shift in collecting nickels is evident with the modern era Jefferson nickels. The focus is now on Mint State examples as collectible. Circulated nickels, those with wear to the surface are not given premium values. Although, circulated examples are collected by beginning and young collectors. Many dates and mints are found in circulation. An opportunity to develop collecting interest in a long running series.

Finding nickels worth above face value is judging condition and recognizing your coin is the mint state grade. 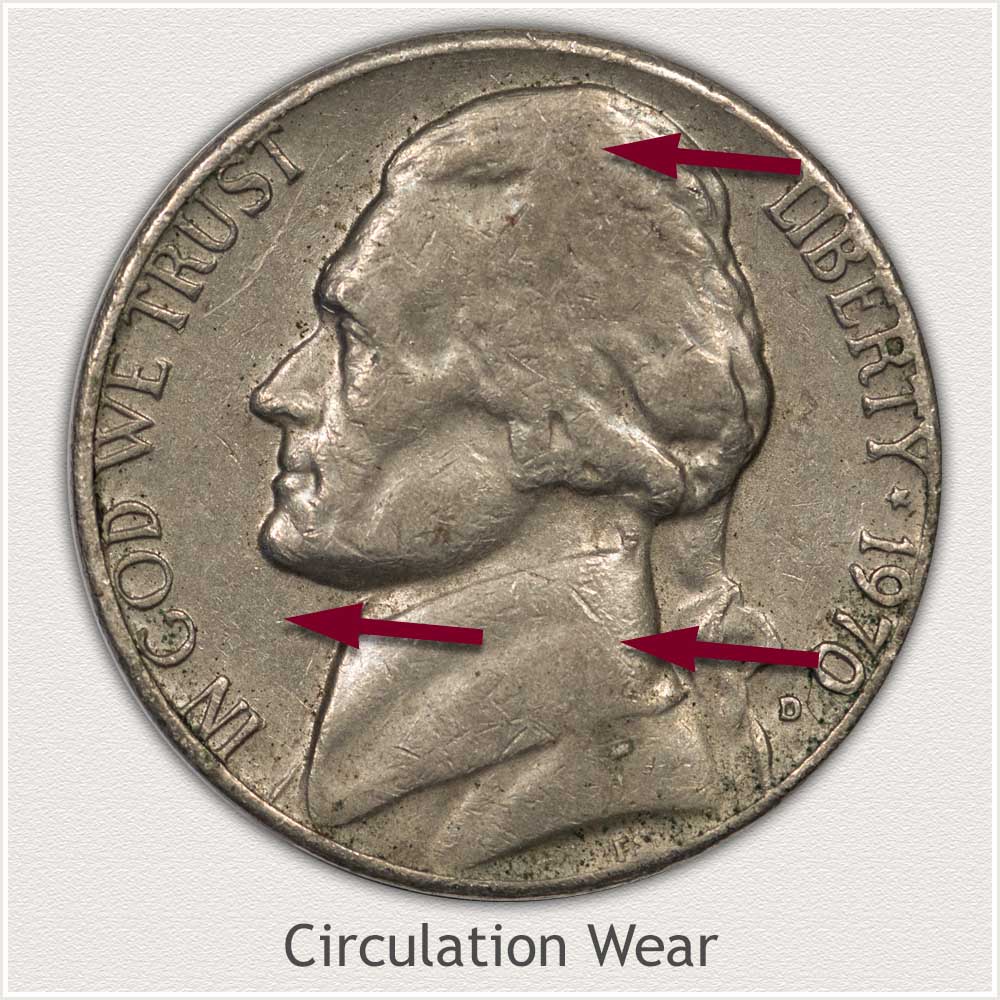 High points to the design on this 1970 nickel are just starting to development a smooth surface. At the top of Jefferson's head is evidence of wear.

A slight amount of smoothness is extending from his collar to shoulder.

Within the fields of the coin, luster has worn to become a dull surface. No longer does the coin shine "as new". 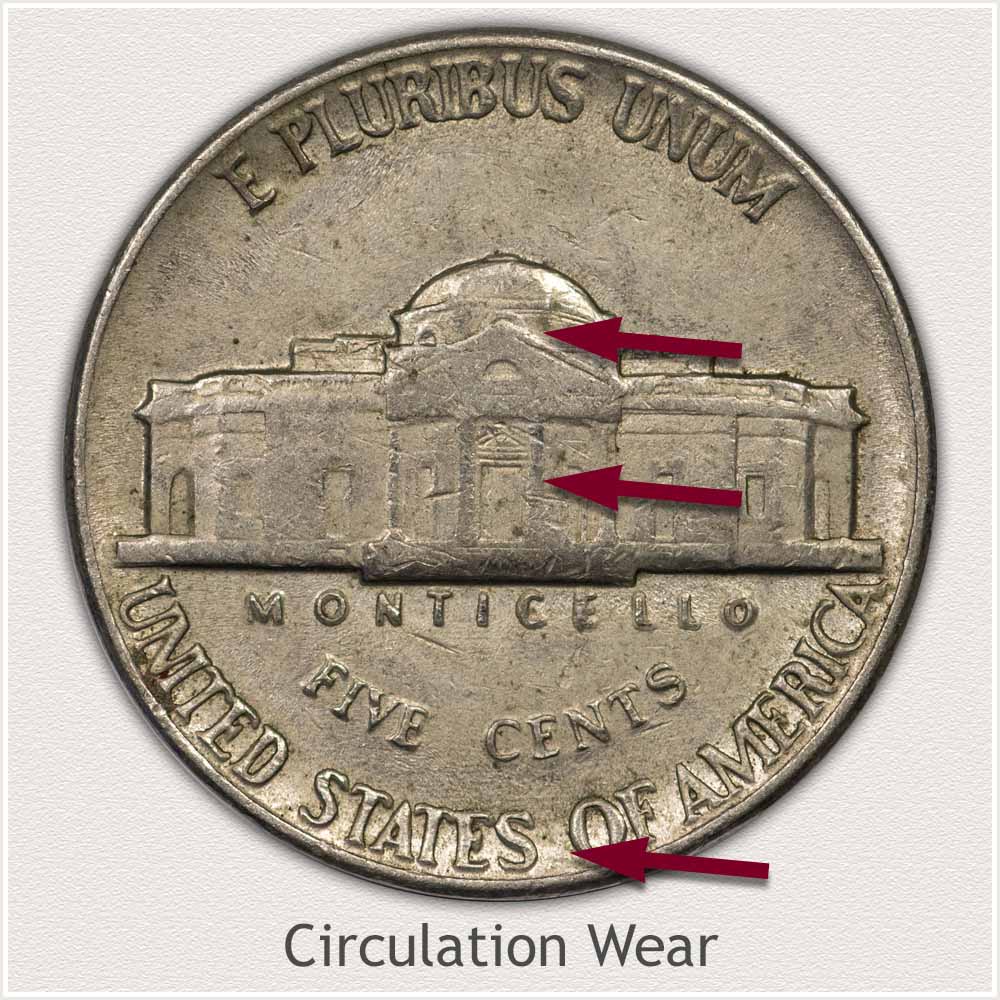 Reverse: Features Identifying Circulation Wear: An overall dullness and lack of sparkle is the first impression of wear to the surface.

Highest in relief are the pillars to Monticello. Wear is clearly smoothing the surfaces of all the pillars.

Also showing wear is the triangular roof line above the entry door. Fine details are just visible but dulled.

A small amount of luster is in protected areas within the letters. Remaining luster is compared with other surfaces to confirm a difference of texture caused by wear. 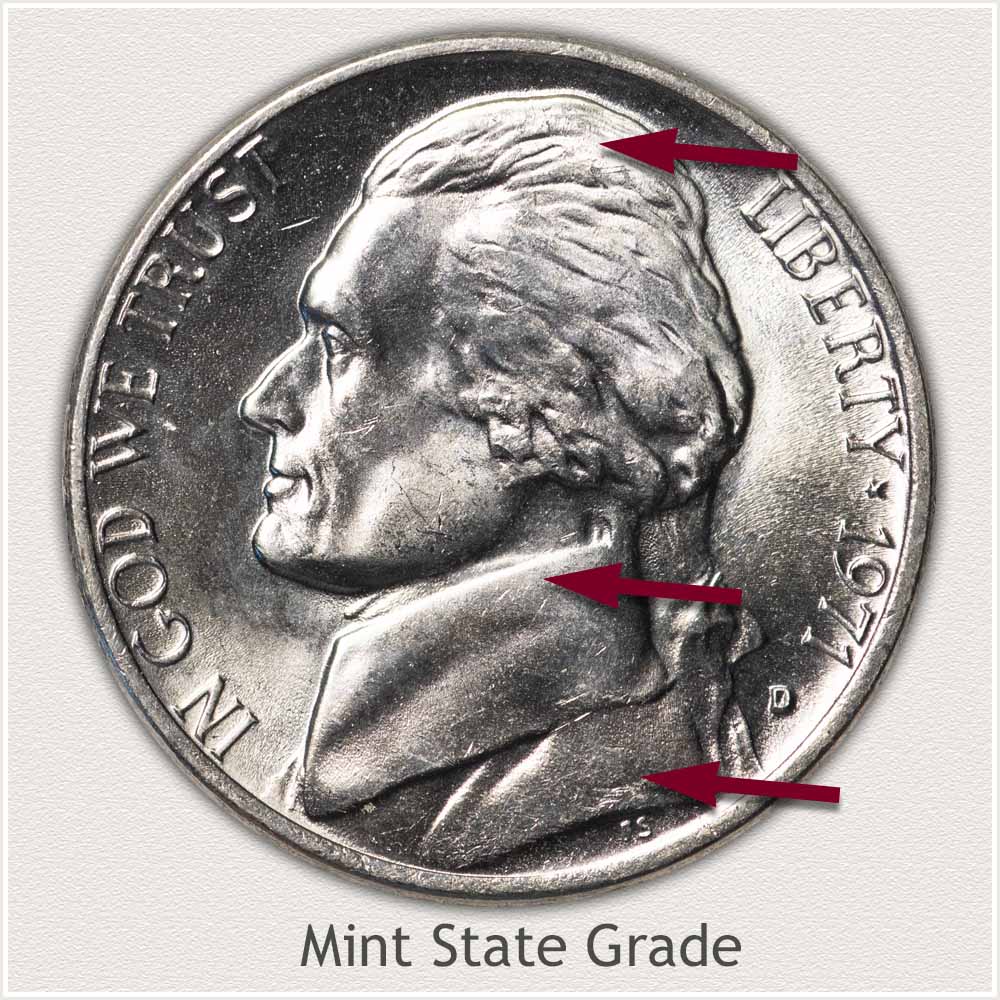 Collector grade is confirmed by complete coverage of luster. Only a few marks to the surface are noted, placing this 1971 nickel into the collectible range.

High relief portions of Jefferson's hair remain lustrous. Any wear towards the top of his head dulls the shine.

Collar line is also judged for evidence of smoothing to the luster and flattening caused by wear. A bright collar the same texture as nearby metal identifies a mint state nickel. 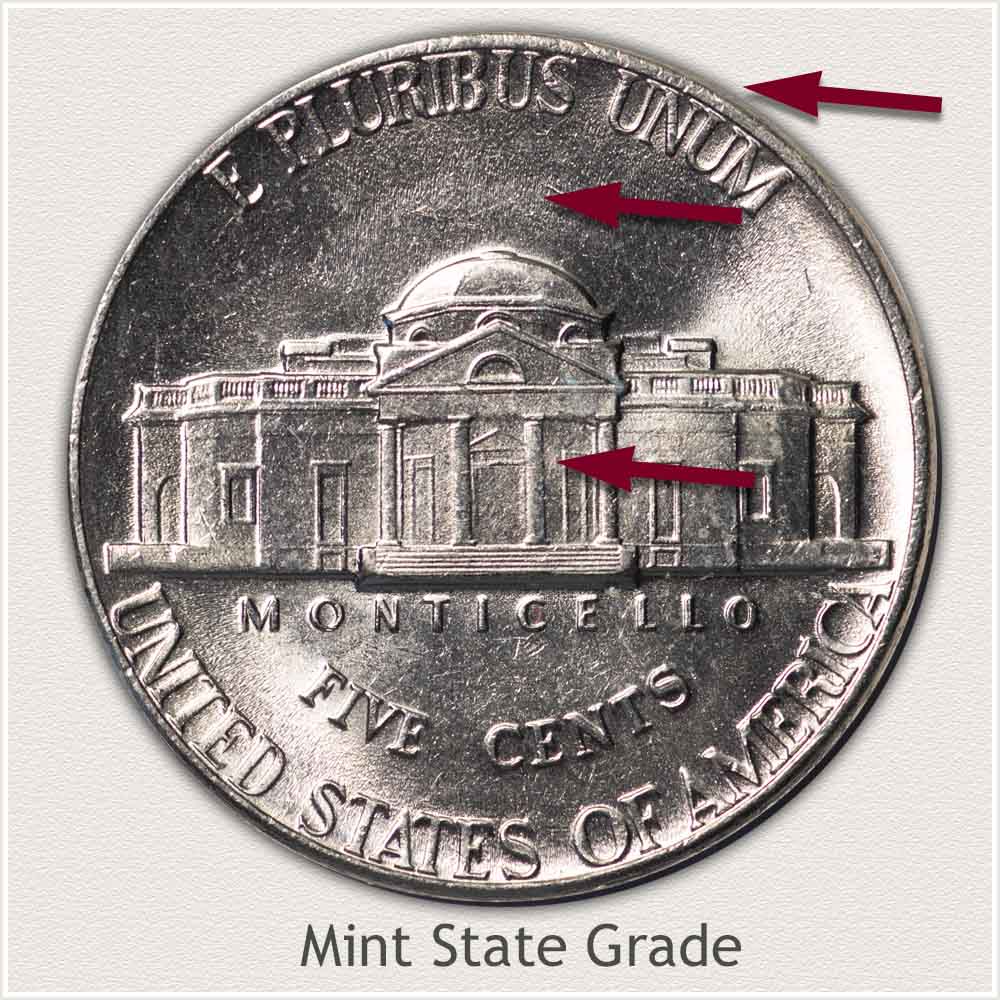 Look closely at the four columns, a rounded profile remains with luster sitting on the surface.

Fields of the coin above Monticello are a fine texture, no smoothing due to wear is dulling the surface.

A bold strike with fine details of the window sets this coin apart from many. In mint state condition it represents a quality nickel. 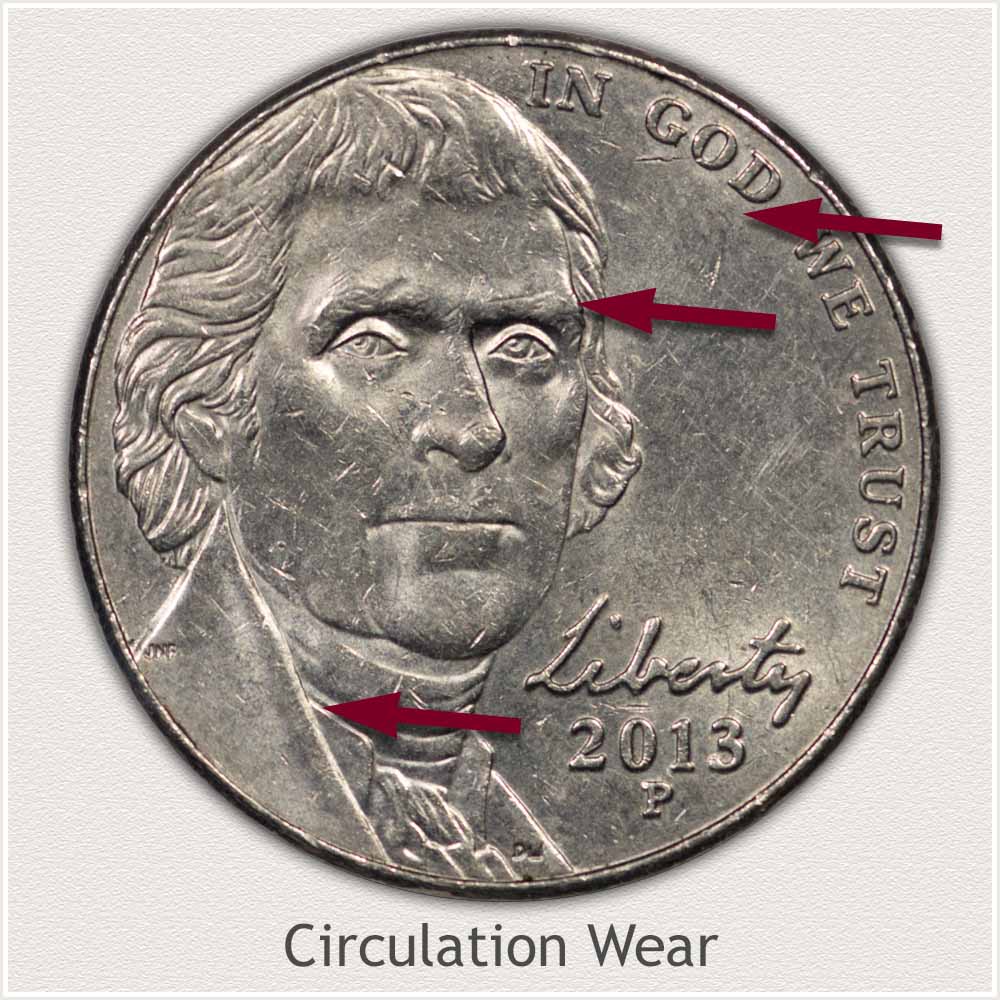 Notice the lack of shine in the field next to Jefferson. Compare to the small area of original surface surrounding the letters of "Liberty". A distinct difference is seen in how the light is reflected.

Wear is beginning to dull open areas on Jefferson's portrait. His eye brows are smooth and lacking any shimmer when rotated under a light.

His coat collar is a ridge exposed to first signs of circulation wear. Looking along the ridge of the collar, luster is removed and replaced with a smooth "sheen' appearance. 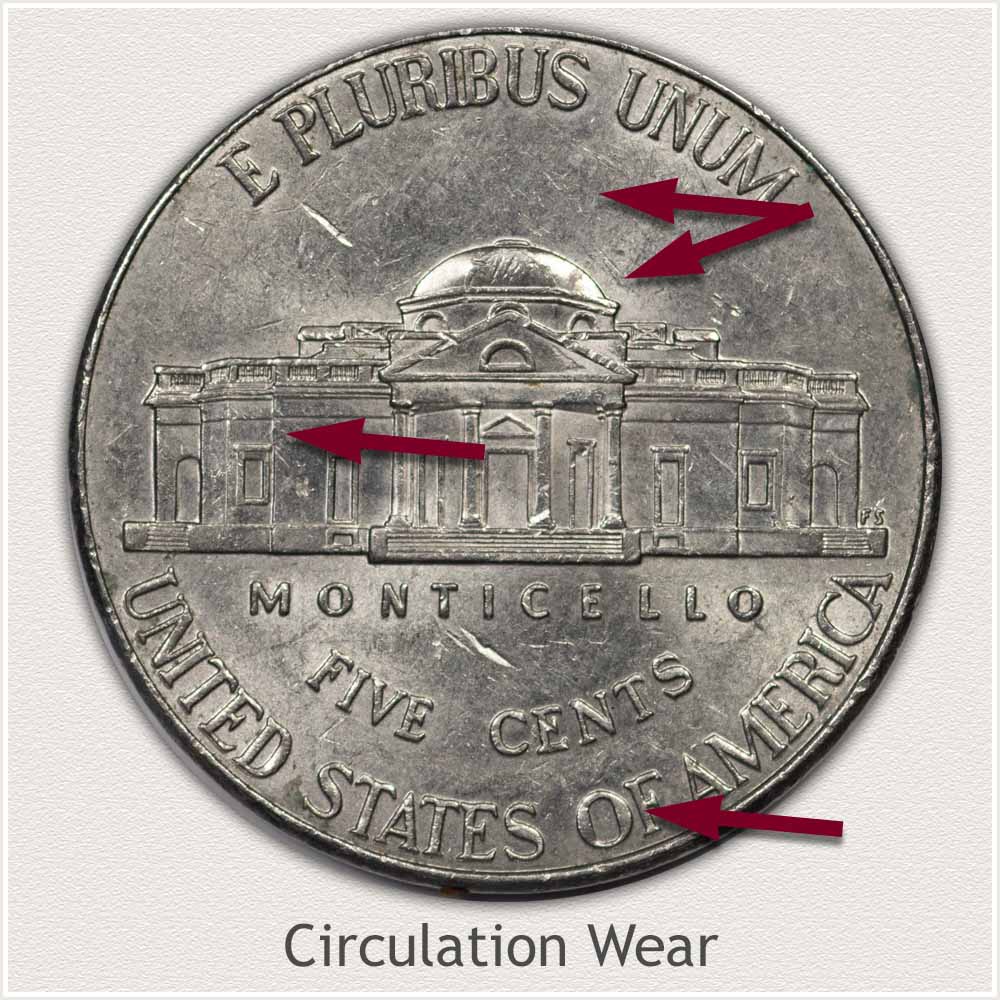 Reverse: Features Identifying Circulation Wear: A dull, lack luster appearance is the first impression of a modern Jefferson nickel that has lost its original luster.

Compare the small amounts of original luster found within the protected areas around lettering with the open field above Monticello. Loosing the freshness of originality lowers appeal and grade.

High areas of Monticello are showing signs of wear. Edges of the building near windows are dull from the smoothness caused by wear.

An overall lack of shine to the letters of the legend is also indicating wear to the surface. 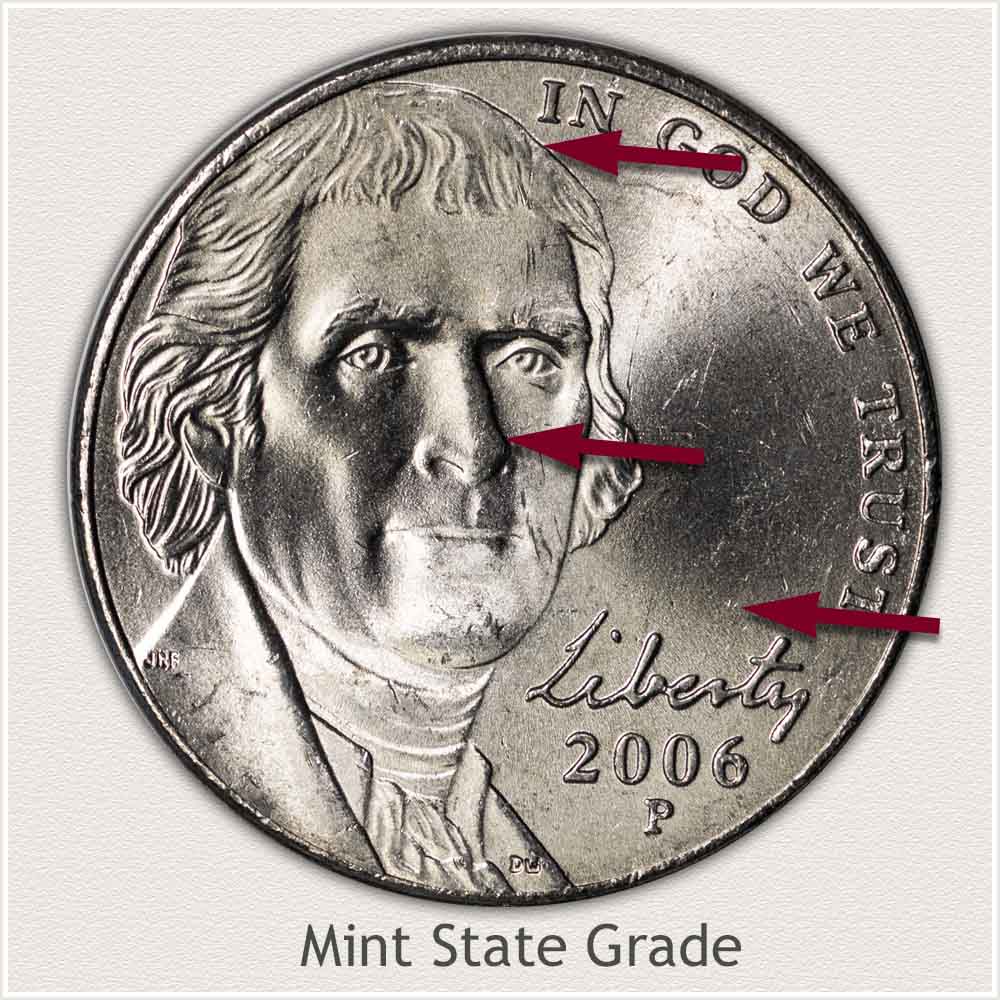 Obverse: Features Identifying Mint State Grade: Mint State nickels have a continuous coverage of luster. The shine is undisturbed by dulling caused by wear from circulation.

High areas are inspected to confirm no wear is present. Jefferson's nose is the same texture as surrounding metal, indicating the Mint State grade.

Hair details are fine raised lines, each presenting themselves as areas to wear. All details of Jefferson's hair are complete and remains with luster.

Open fields are large in the new design and any dulling to these indicates wear to the surface. Fine grains of luster remain on the example covering all parts of the field. 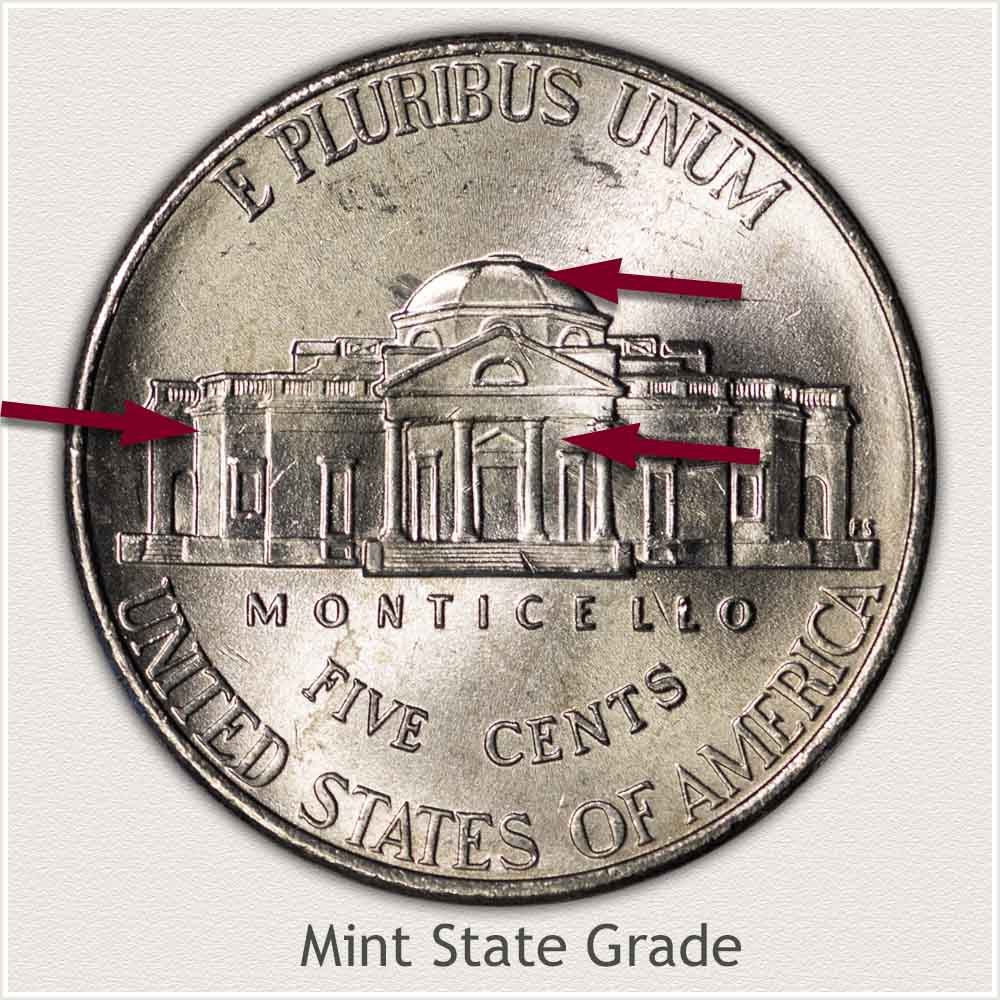 Center of the coin and easy to dull are the columns. Looking closely, all remain with original surfaces covered with luster. Compare the texture of the metal on the columns to protected areas to confirm no wear.

The very top of the dome is a curved surface. Wear causes the high areas to become smooth loosing luster and appear dull.

Original luster is seen on all edges of the building and small frames to windows. Notice the small railing details are without any lose of detail. Wear is quick to lower the level of brightness to the surface.

Separating the vintage from the modern era Jefferson nickel in coin collecting is the shift to focusing on Mint State condition coins. Values follow placing premiums on Mint State examples. Compare closely how your coin looks in reference to the grading images.

A large supply of Jefferson nickels is available today. Mintages for each year and mint are in the hundreds of millions of pieces. The challenge is recognizing a coin worth a premium over face value. Such a coin is without wear to the surface, bright with luster, and lacking distracting marks. Many coins fall into the category of no wear to the surface; a coin newly released into circulation, fresh from the bank. Meeting higher standards identifies those "gems" collectors seek.

You have judged your coin as mint state; the next step is judging added surface qualities of the grade. Viewing the above image; the first coin is a little abraded and somewhat dull when judging luster quality. The coin in the middle has nice - typical luster, and few noticeable marks. Standing out is the coin on the left. Bright luster with minimal marks, an appealing coin to collectors, worth a premium.

Special note: Production of "S" mintmark - San Francisco mint Jefferson nickels was interrupted in 1954, the last year any "S" mint nickels were placed into circulation. San Francisco resumed production in 1968 striking only "proof" issue nickels. These are included in proof sets and sold to collectors. Finding an "S" mintmark nickel dated 1968 and later is a coin removed from a proof set. Once these proof coins enter circulation, they quickly lose their high-quality finish and any value. An unusual find but not valuable.

A large raw supply of modern Jefferson nickels is available today. Mintages of each year are in the hundreds of millions of pieces, 1999 topped one billion pieces from both Philadelphia and Denver. Consequently, the challenge becomes locating a coin worth a premium over face value. Such a coin would represent a high-end example in terms of luster, quality of strike and surface preservation.

Even though most worn and circulated Jefferson nickels are valued at five cents the series does have future potential. Decades old nickels still found in daily use and recent design changes both promote interest. Finding date and mintmark combinations going back many years is a fascinating challenge to young collectors. Finding the best possible condition coin adds dimension to their collecting skills.

Return to the index page of Shield, Liberty, Buffalo, Three Cent Nickel and Jefferson Nickels. Match your coins to the grading images and value charts, discover your rare coins.

Videos, close-up images and descriptions, give insight into the details to accurately grade the condition of your old nickels. Judge carefully to find true potential value.

Do you have other denominations?