From rare dates, to condition, to finding the "O" mint mark. Detecting and understanding all of these leads to an accurate three cent silver value. Follow the step by step approach and discover how much they are worth.

Viewing the value table; a large range is evident. Identify where on the chart your coin is listed by proceeding through the steps.

The above are wholesale coin values. Computed from dealer's price lists and auction records with various mark-up factors figured in. They reflect closely the value you would expect to receive when selling. Note: Variations in value do occur subject to subtle grading points, collector demands and dealer needs.

Note: In 1873 a few coins were minted in "Proof" condition only, dated 1873. A special minting process is used to produce a proof coin, different from a regular strike intended for circulation. These proof coins where distributed to collectors.

Your old 3 cent silver piece is an unusual denomination minted for circulation a short 22 years beginning in 1851 and ending in 1872. Within these years, three small changes to the design were made. 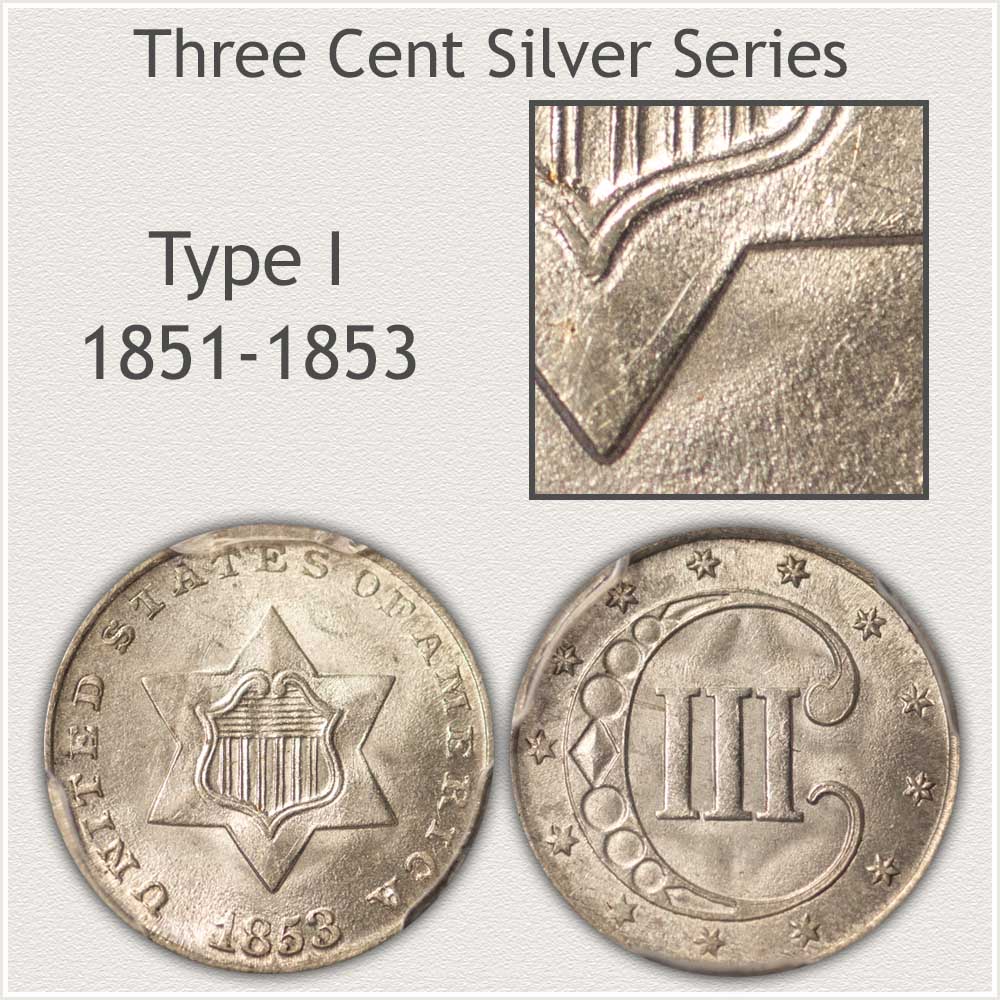 A large six-pointed star with the US shield within is the main device of the obverse. These small silver coins featured on the reverse a Roman numeral III within the letter C and thirteen stars.

Variety I enjoyed the largest numbers produced. From 1851 to 1853 over 36 million struck, it is the plentiful variety surviving today. These are well received and many are collected as type examples of this unique denomination of silver US coinage. 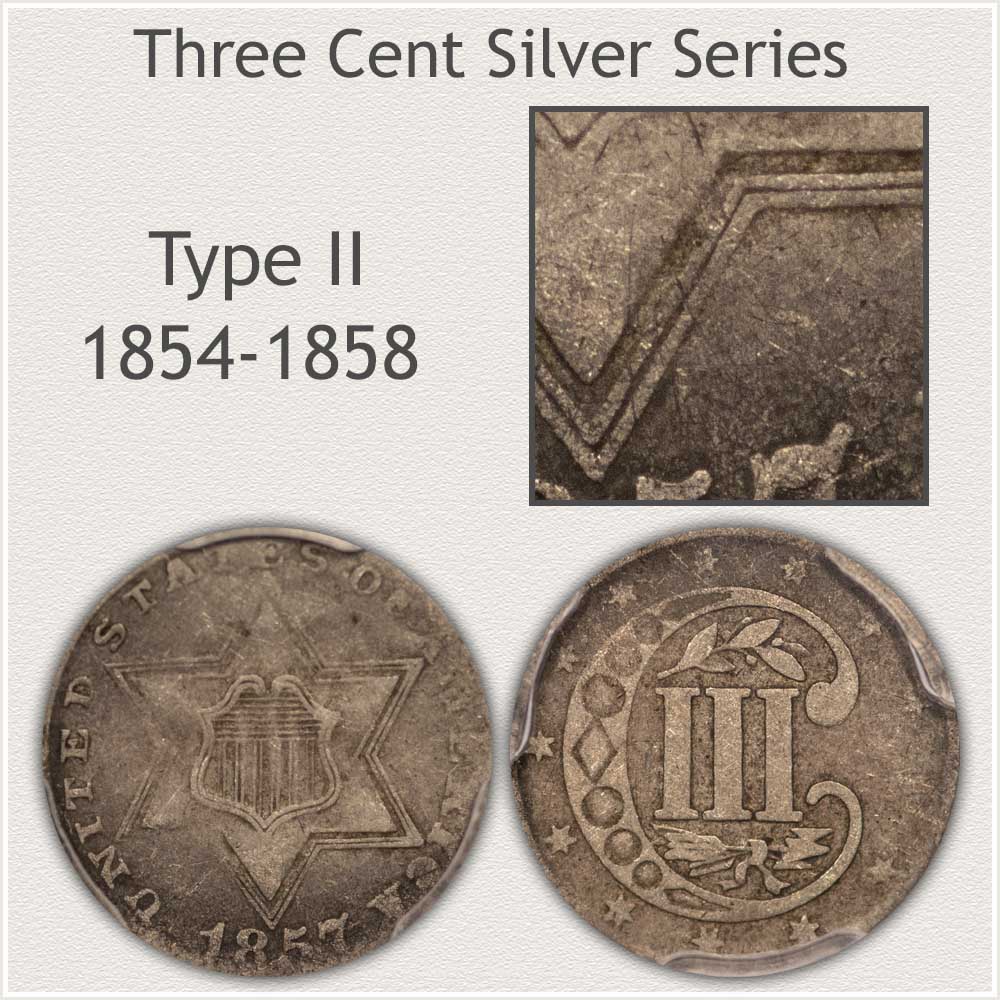 Two additional lines were added to the star's border in 1854 enlarging the overall star and shield design. Added to the reverse is an olive branch above the Roman numeral III. Below three arrows tied with a ribbon fill the design within the large "C". 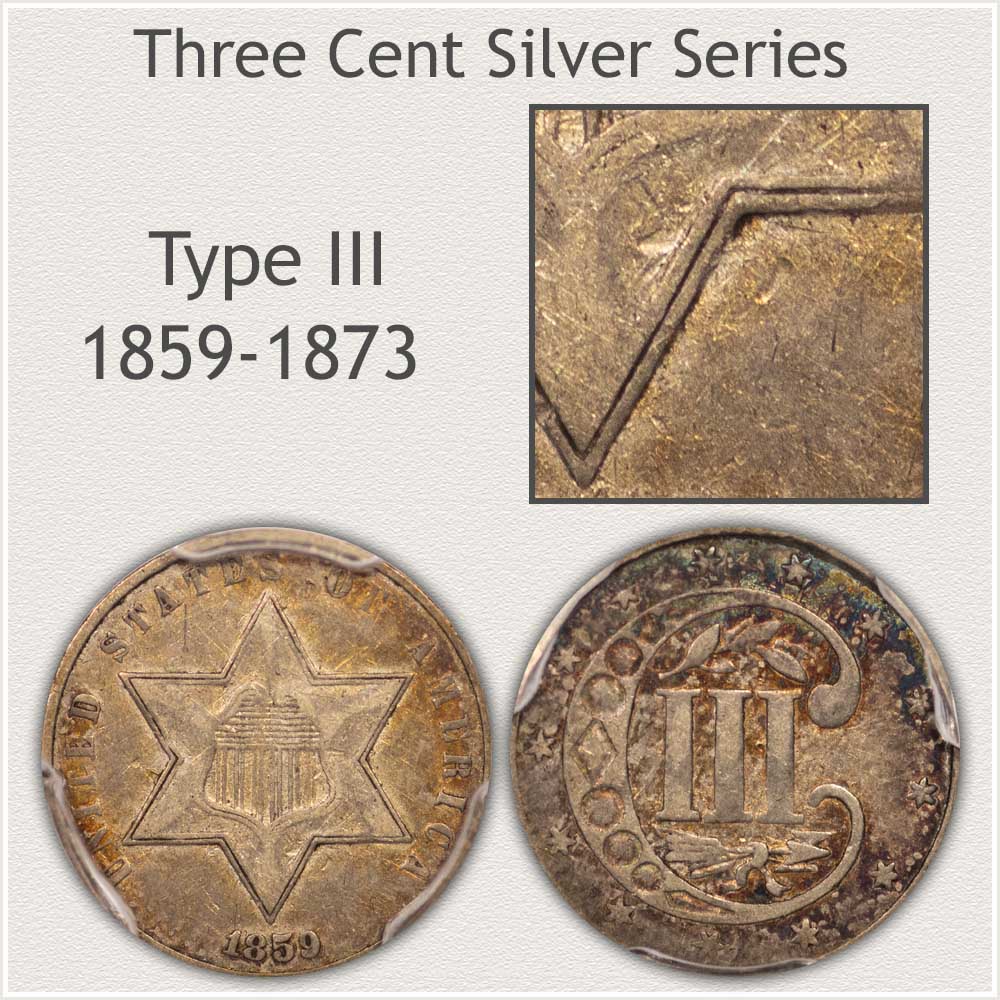 A very minor change to design was the removal of one outer line of the star and shield design. Now, two distinct lines border the outer edge of the star. The reverse is the same, leaving a prominent Roman numeral III, olive branch and three arrows with the large "C".

The big change setting the variety 1859 to 1872 apart is very low mintages. Just over 1.5 million for the entire variety. Early years of the variety; 1859 to 1862 mintages were ample and survivors exits to day. Beginning in 1863 few were minted, few released into circulation and very few survive. All 1863 to 1872 3 cent silvers are rare and seldom seen in the market.

1851 Only Year with a Mint Mark Variety 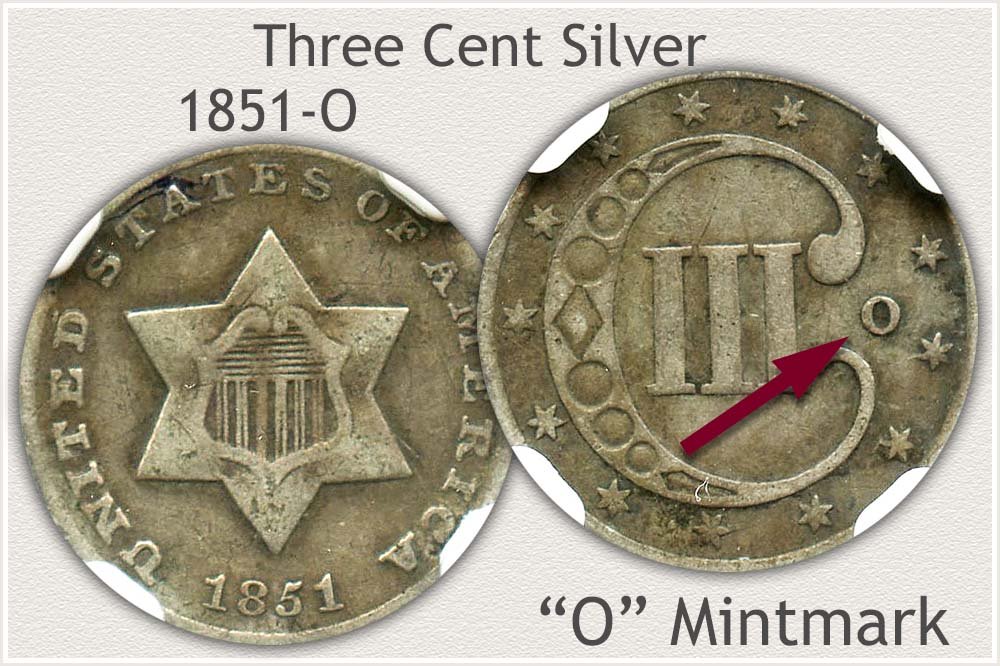 New Orleans mint struck 3-cent silver pieces in one year only; 1851. All other production of the denomination was at the Philadelphia mint.

Look to the reverse of the coin to identify this issue. New Orleans placed an "O" mintmark just in front of the large C.

Popular with collectors best describes the 1851-O. Almost three quarter million were minted and are available today in a range of conditions and value points. The only mint marked issue of the series and first year of issue of the series combine to place the coin high in desirability.

A close and careful examination of your three-cent silver piece often leads to discovering a higher value. The reason is the condition of your coin. Finding a higher condition coin happens more often than finding a rare date.

Collectors and dealers are willing to pay a premium for better condition coins. Compare your coins to the grading images below and determine their "Grade", a key element to three cent silver value.

Set up a work space including a lamp as a single light source. Tilting and rotating a coin's surface under this light allows small details to highlight and appear. Small areas are brought closer with magnification.

Although many factors go into grading coins, some of the major highlights are... In "Extremely Fine" condition three cent silvers are very boldly detailed. A lesser condition "Fine" example is obviously worn but pleasing. However, in "Good" condition the coin is recognizable, although, heavy wear has removed much of the design. 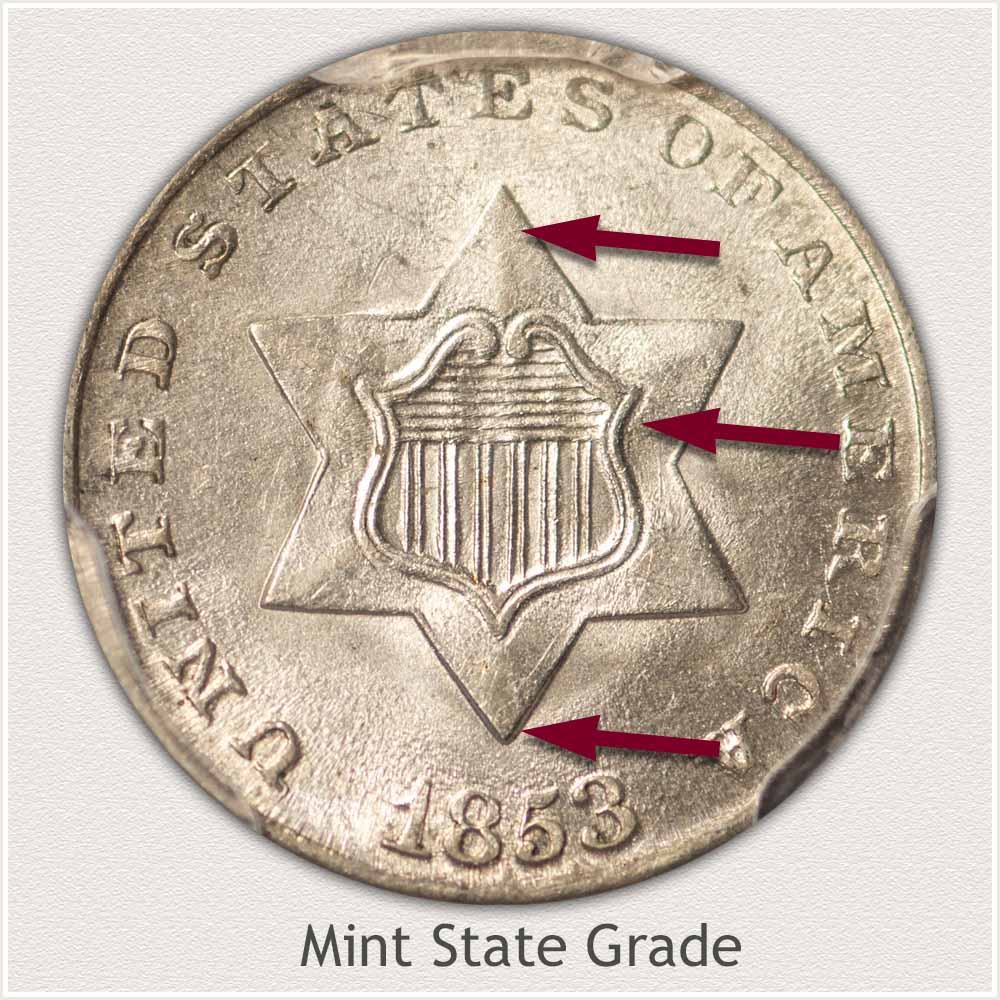 Obverse: Features Identifying Mint State Grade: No wear to the surface is a key defining element to grading a three-cent piece in mint state - uncirculated condition.

Ridges from the points of the star towards the shield are high in elevation. Smoothing of mint luster happens quickly in this area when a coin circulates. Luster, a fine grain texture remains on these star ridges helping confirm no wear to the surface.

Frame of the center shield is next inspected for any evidence of wear. Look along the entire frame, especially where it meets at the top, signs of wear become evident as a different texture to the original minting luster.

At the very ends of the star points, these remain as minted with no smoothing to their surface, helping identify a mint state coin. 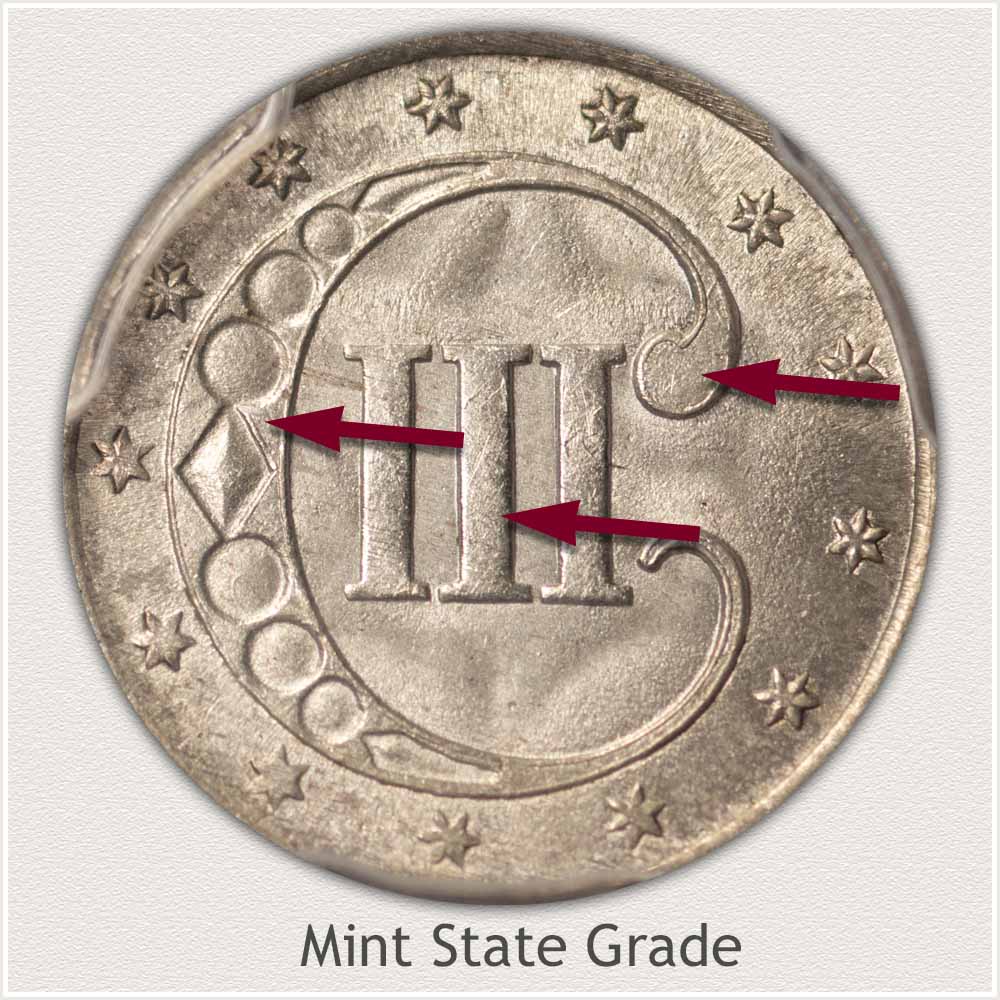 Reverse: Features Identifying Mint State Grade: Look closely at the surface of the Roman numeral three. From top to bottom of this feature an unbroken luster remains on coins with no wear.

Elements of the large "C" are fine in detail and inspected. Diamond and circle designs along the back all feature raised central areas. These remain without any evidence of flattening caused by wear.

The rounded top ending of the "C" is prone to first signs of wear. Judge the texture of this rounded end with the rest of the "C" design. Wear is apparent as a smooth surface on the high areas. 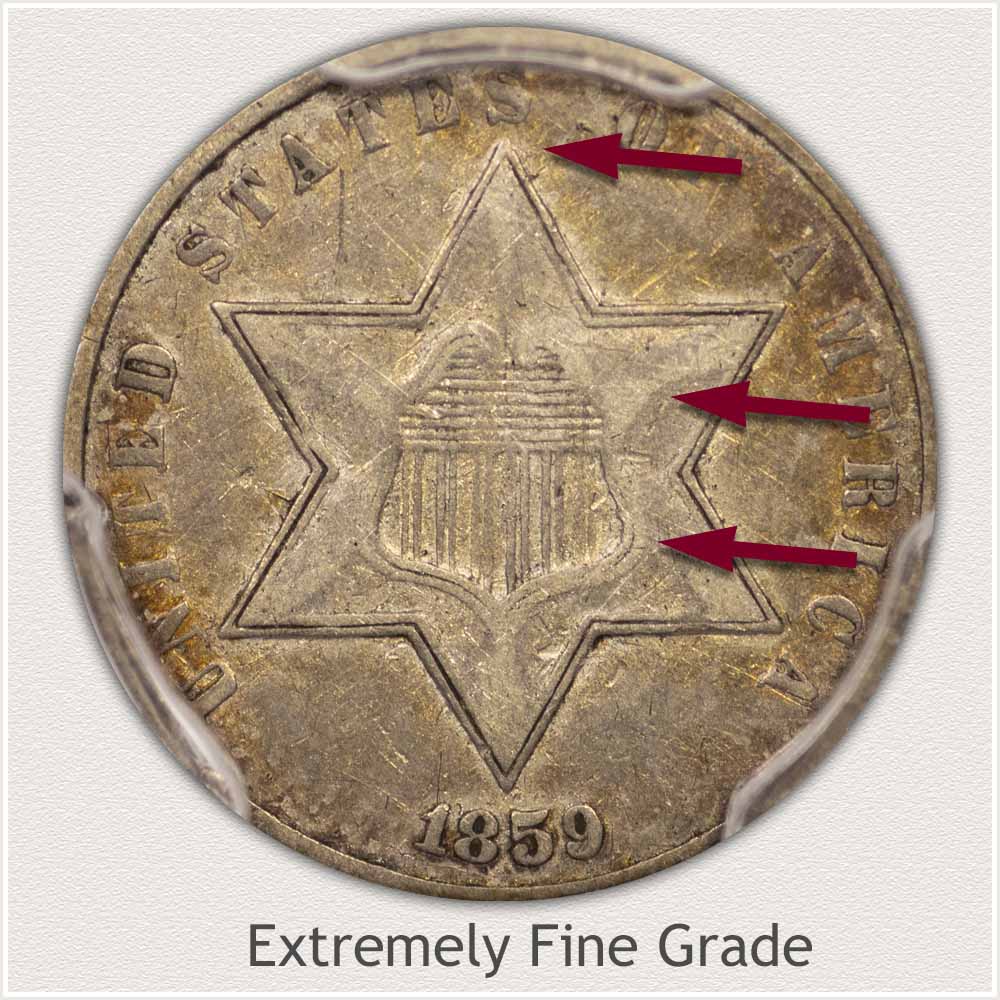 Obverse: Features Identifying Extremely Fine Grade: Wear is evident to upper areas of design. If wear is light the coin is a candidate to grade Extremely Fine.

A smoothing and wear is limited to just the tip area of star points. Each star tip is well defined and very bold from the field.

Wear to the ridge running from the star ends to shield is very light with minor flattening to ridge. 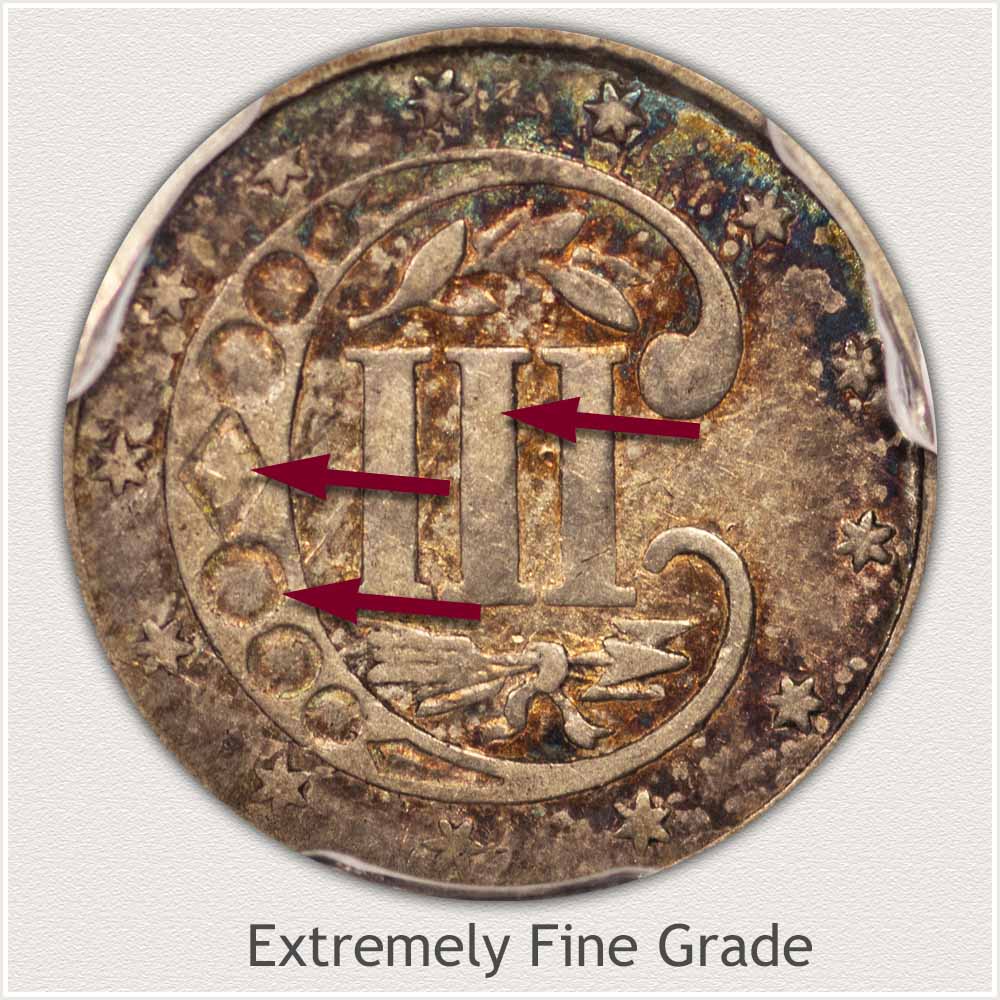 Reverse: Features Identifying Extremely Fine Grade: A light amount of wear is smoothing the Roman numerals. Each numeral remains very bold from the field of the coin.

Inspect the diamond design of the "C". In extremely fine grade the center is still raised with just a slight flattening restricted to the very top.

Further judge raised inner domes of the circles on either side of the diamond. Any evidence of wear is flattening only the tops of domes. Overall appearance is of a crisp and well detailed coin. 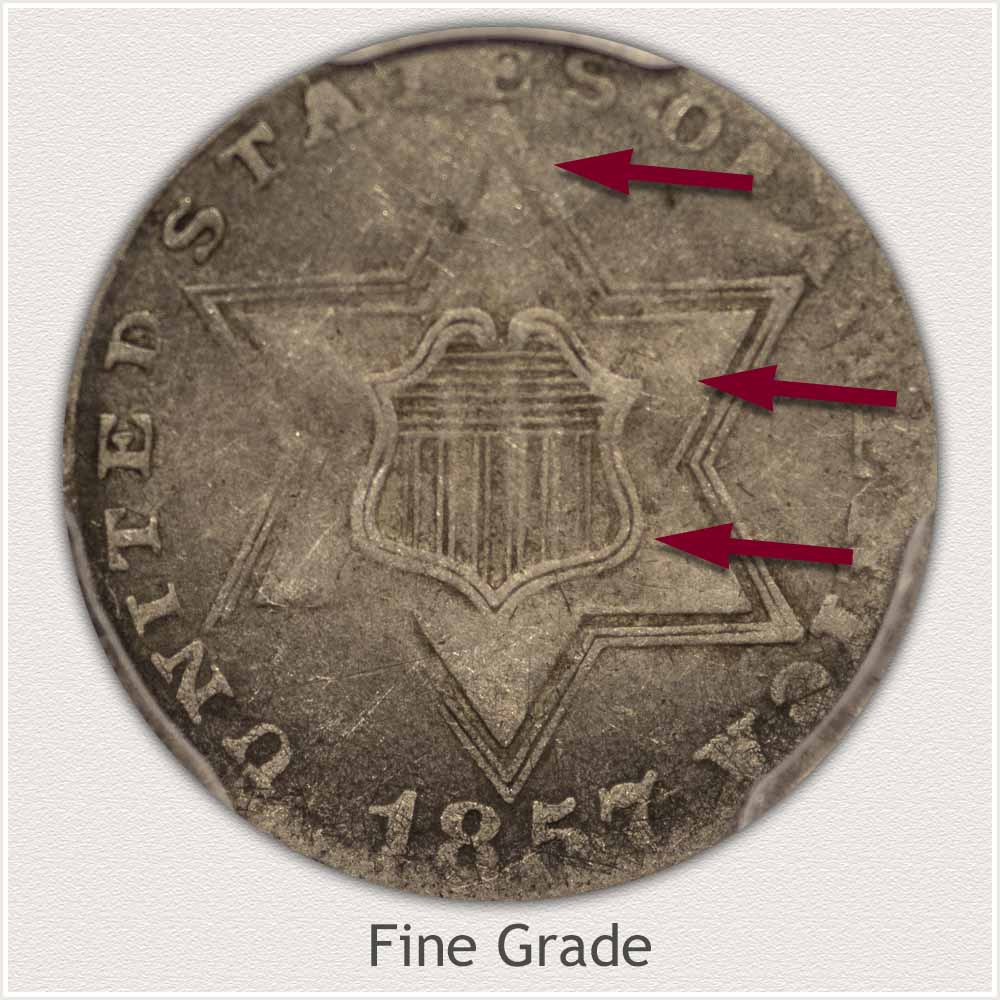 Obverse: Features Identifying the Fine Grade: Heavy wear to the obverse and Moderate wear to reverse is the overall "look" of a Fine grade coin.

Star is complete and remains raised from the field. Wear has flattened the raised ridge at the ends of the star points to a flat plane.

The raised ridge that once ran from the points of the stars to the shield is evident with a small valley remaining between most star points. In this condition, strength and height of the ridge imparted at initial striking of the coin often causes areas of larger flatness and weakness.

Outer frame of shield is evident with most of its outer edge free of the star. Scroll detail at top of shield frame shows minor detail.

A solid for the grade and indicating a well struck coin is a mostly to full rim. 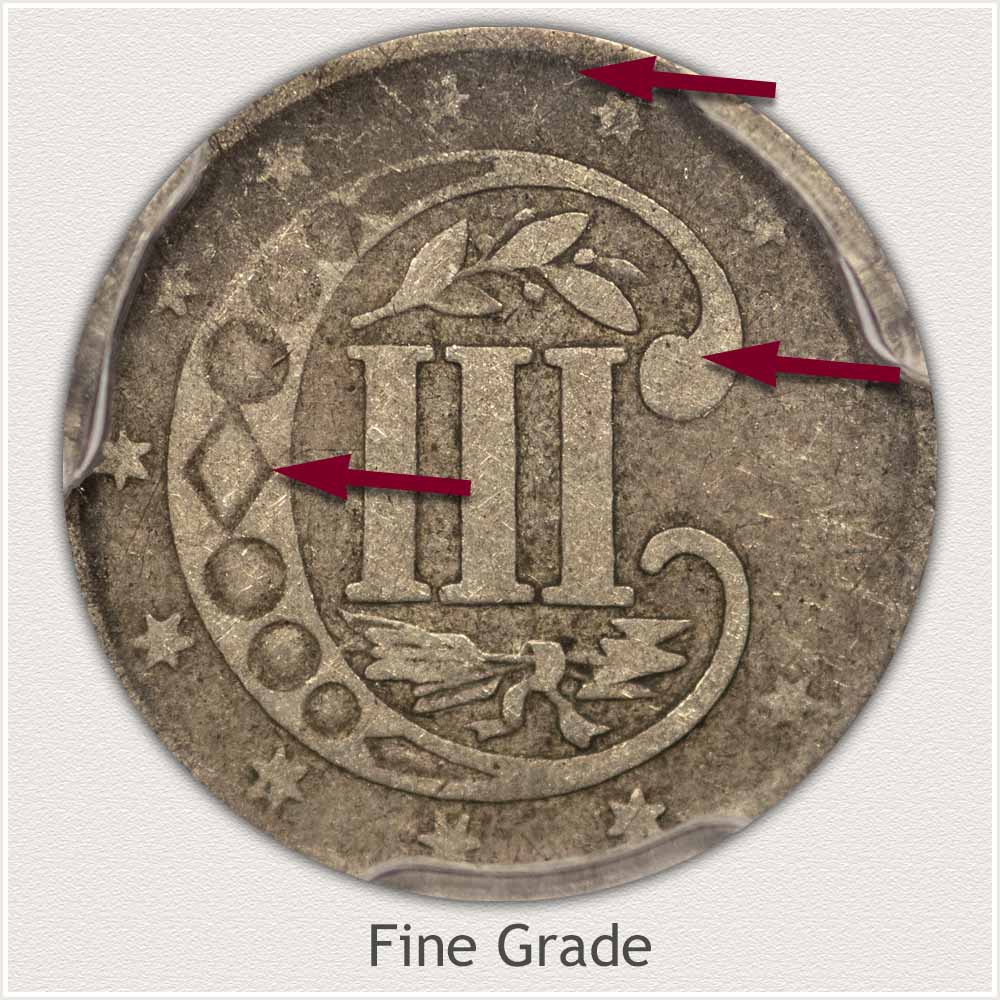 Reverse: Features Identifying the Fine Grade: A nice visual impression is given on the reverse of a three-cent piece in Fine condition.

Indicating the amount of wear is a very flattened center to the diamond design. A once raised point to the center of the diamond is now a flat area.

Domed centers of the circles also lack any depth and definition. Flatness has removed most of the rounded profile.

Rim is becoming weak but remains separated from the stars. Small areas of weakness along the rim are expected due to strike differences. 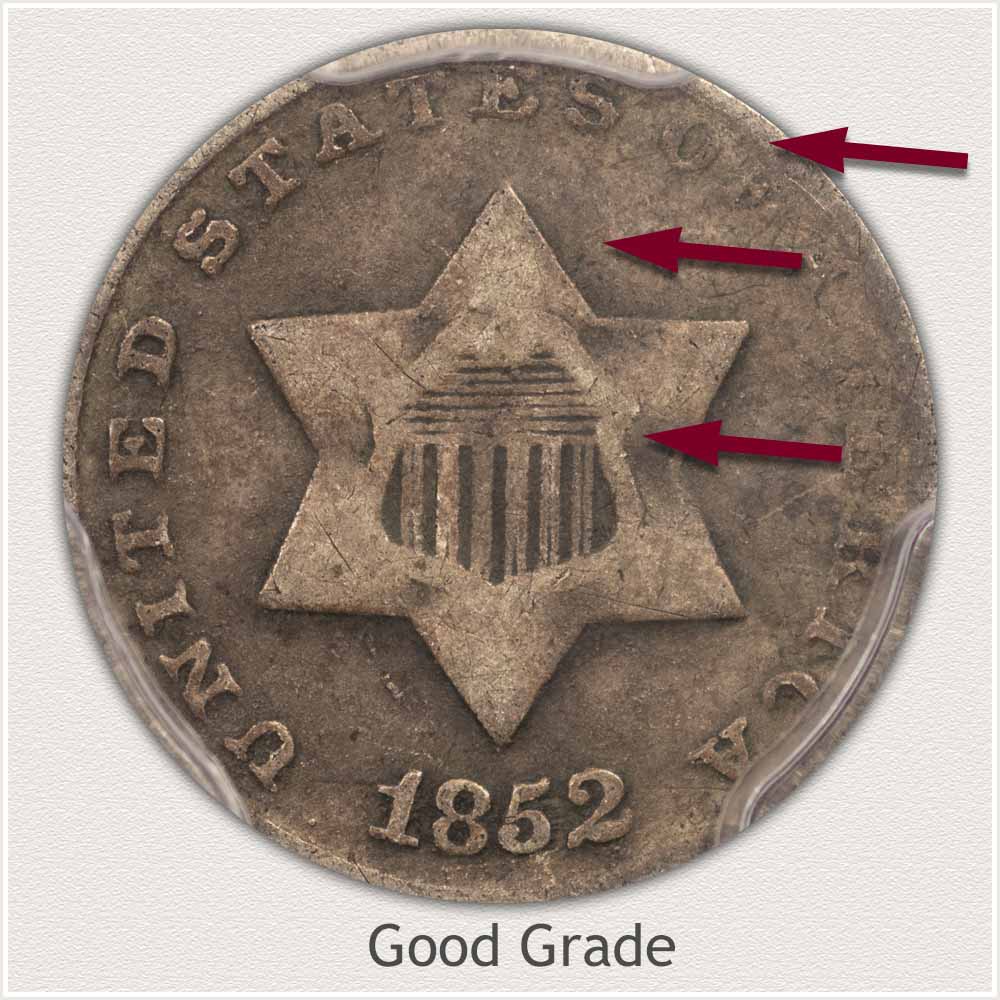 Obverse: Features Identifying the Good Grade: When the condition of a coin reaches the stage of wear obscuring lettering and date along the rim a Good grade defines its condition.

A smooth flat star lacking any depth to its profile remains as the central device. Once high and low features to the ridge giving depth to the star a flattened.

Traces of a frame to the shield device is possible, however, most is lost to wear.

Lettering is faded and beginning to merge with the rim. A readable date remains with portions weak. 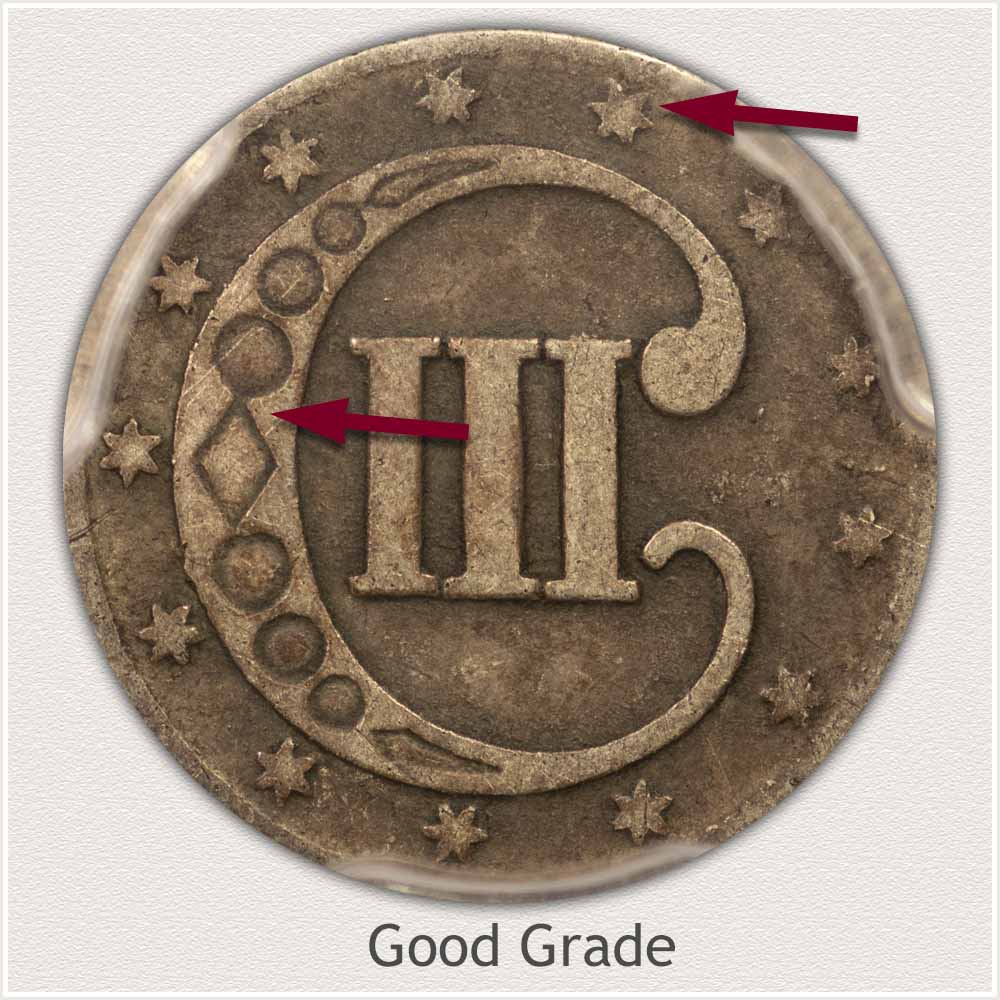 Reverse: Features Identifying the Good Grade: Diamonds and circles within the "C" are missing any depth. High areas depicting a domed appearance in the center are flat and only a strong outline remains.

Stars along the rim are very flat, slightly rising from the field. In many areas the rim is worn to a condition of blending with stars. Depth of design is lacking on devices.

Three cent silver coins because of size and design are sometimes difficult to grade accurately. It is important to know grading a coin is never an exact science. You have your opinion of grade, dealers and collectors have their own opinions... and they can all differ slightly.

If after the grading process you feel your coin is a high value coin, but not completely sure of its grade. It's a good time to seek professional help.

Collectors and dealers consider PCGS and NGC as leaders in coin grading services. When potential value of a coin is approaching $100 or more it is time to seek their advice. Grading services both authenticate and grade your coin. The fees involved are offset by the assurance you understand and receive the full three cent silver value.

One of the draw-back of these 3-cent coins is size. Very small in diameter, you can cover them with a finger. Design elements are also very small in comparison with other coins. When competing with larger coins for attention, any aesthetic quality is a positive improving appeal. 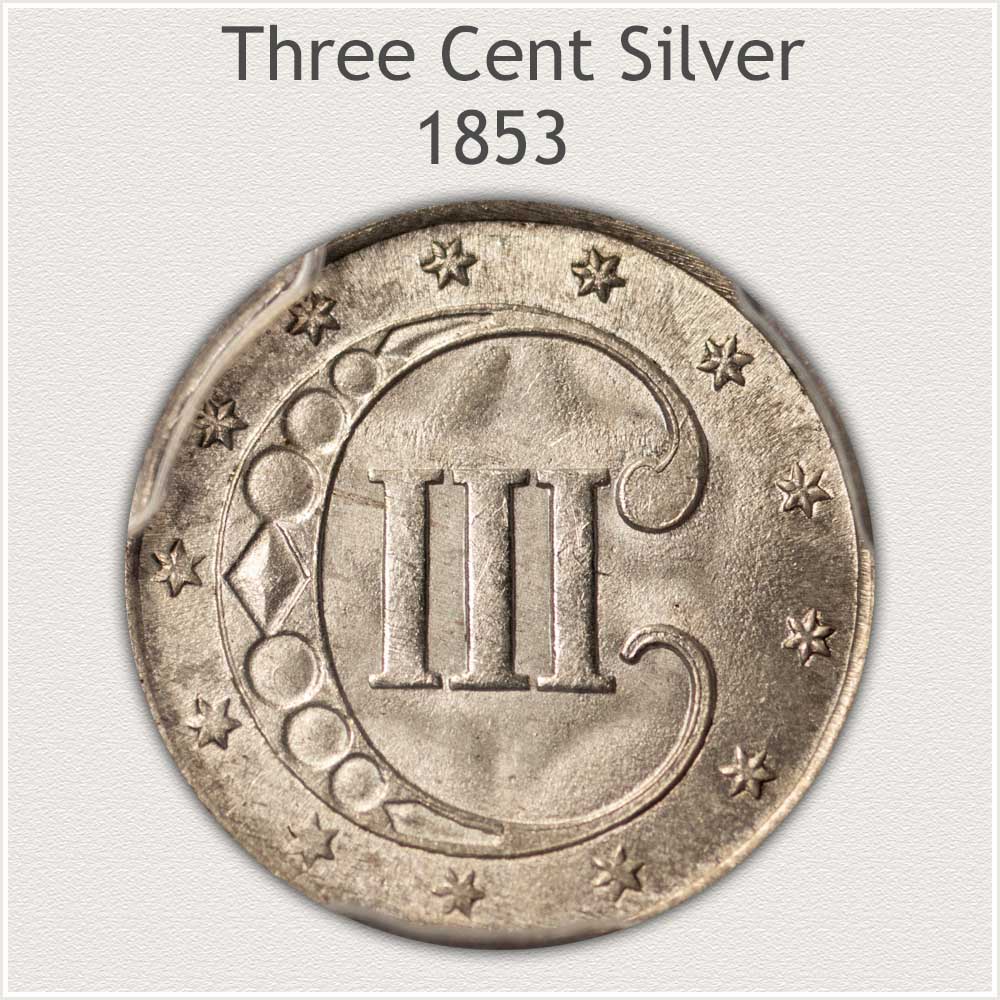 Overall, a mint state example starts with an advantage; high end condition. This 1853 has survived without deterioration, maintaining a bright luster. Eye appeal ranks high with the lack of marks and well struck devices. Making up for its small size is excellent eye appeal. 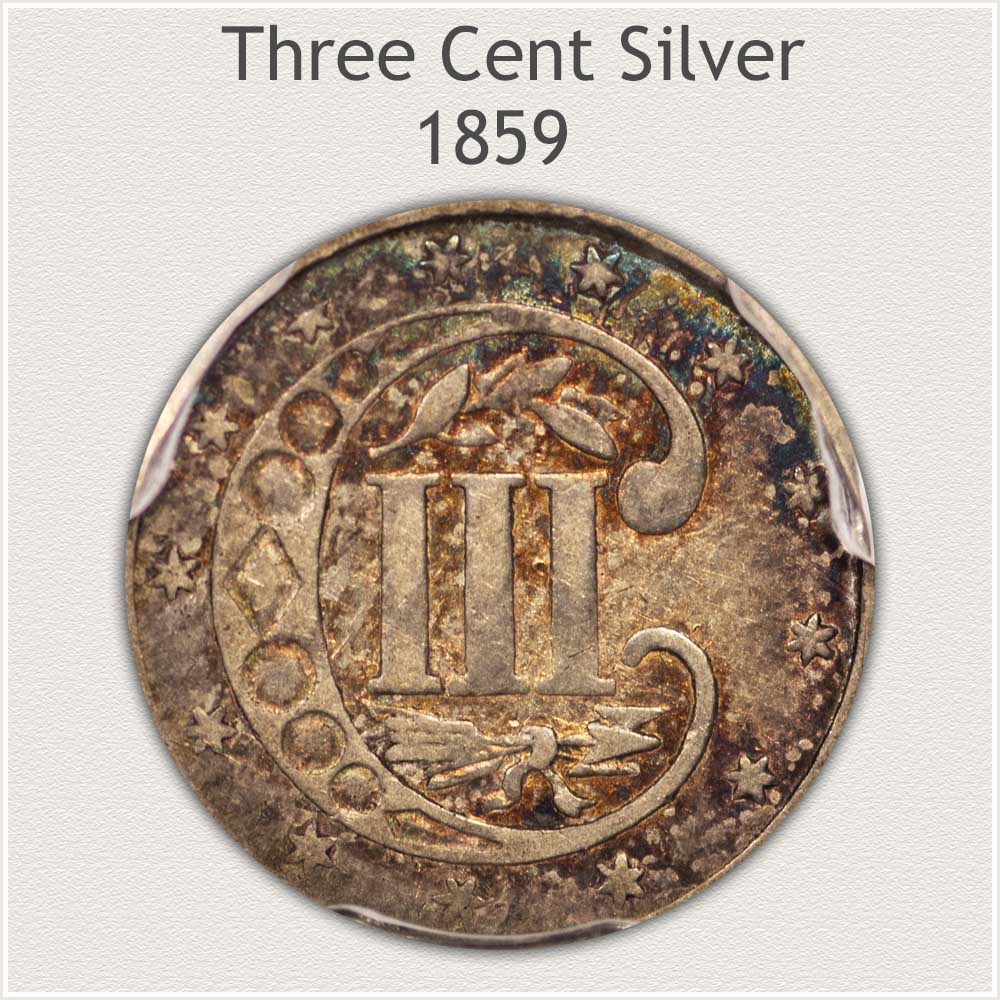 Lightly toned colors help highlight design elements. Deeper shades of toning are found on the reverse developing into blues and golds framing the stars towards the rim. This 1859 represents the scarce Type III variety in an eye pleasing example.

Aesthetic qualities extend to circulated examples as well. Originality of surface and a light amount of circulation wear often results in a pleasing coin. A collector seeking one example three cent silver to represent the series would find this 1859 a desirable and affordable choice.

A step by step method is used to discover old coin values. Beginning with identifying important dates and mintmarks. Next comparing your coin to images to judge and determine its condition and recognize its "grade". Value charts narrow how much coins are worth.

US three cent pieces were minted in two distinct series, the silver variety and the nickel variety. Discover values of the other three cent coin series. Using the same step by step method, match your coins to the grading images and value charts.

Understanding value of your Three Cent Silver piece is a great first step to successfully selling these coins. Resources helping find markets is the next step.