Lincoln Penny Value is Amazing for the Right Coin

How to determine Lincoln Penny Value. Judging how much an old penny is worth follows a step by step approach.

Date and Mintmark is first identified; each variety is listed separately on value chart. Next step is understanding condition and its grade. Compare your coin to grading images helping visualize differences in appearance and condition. Additional special qualities are then considered. Subtle and also distinct factors unique to Lincoln cents are studied helping recognize an accurate value.

Above are wholesale coin values. Dealer's price lists and auction results for each date and mint of Lincoln cents are averaged with various mark-up factors figured in. They reflect closely what you would expect to receive when selling.

Identify variety of Lincoln cent. Philadelphia, the main mint along with branch mints Denver and San Francisco struck wheat cents. Mintmarks were used to identify the mint striking the coin. 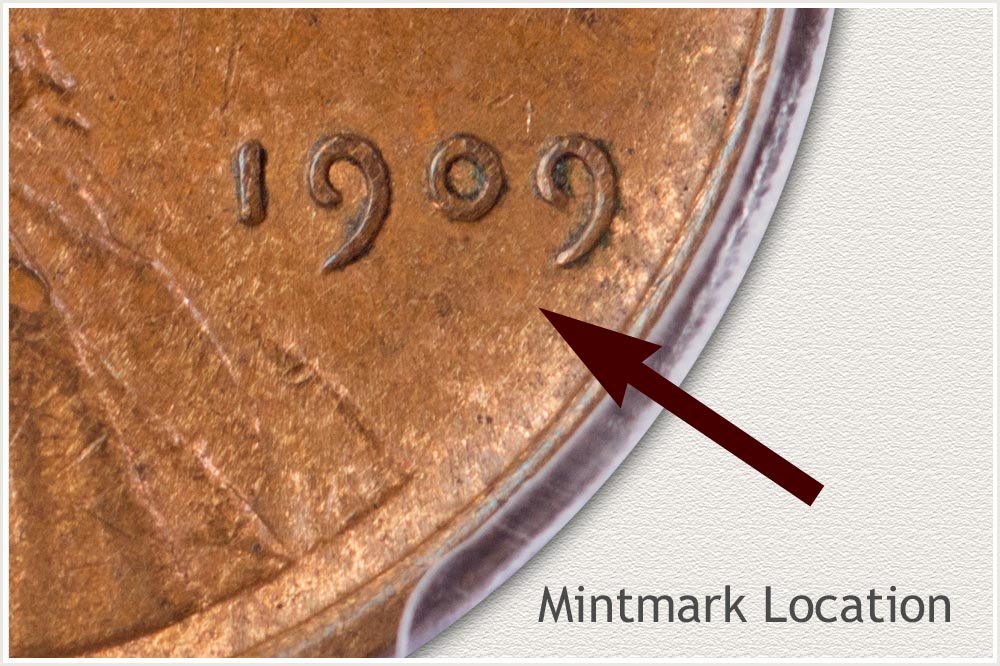 Over the course of the wheat penny series (1909 to 1958). Philadelphia, the nation's primary mint struck 14 Billion wheat cents. Additionally, all engraving of the dies used for Lincoln cents were crafted there. Each branch mint received coinage dies yearly as adjustments to date and mintmarks were made. 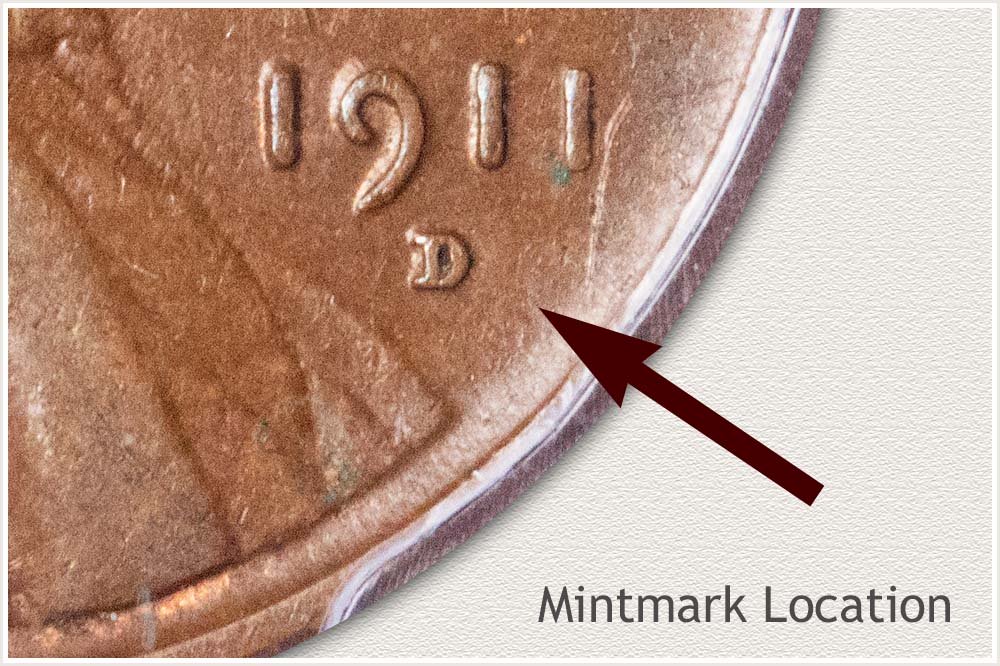 As a new branch mint at the time, Denver coined fewer wheat cents than Philadelphia. First year of cent mintage with a "D" mintmark is 1911.

Many dates of Denver wheat cents are considered elusive in all grades of condition. Early era (1909 to1933) examples are especially sought by collectors. These Denver mint coins are an important variety to identify. 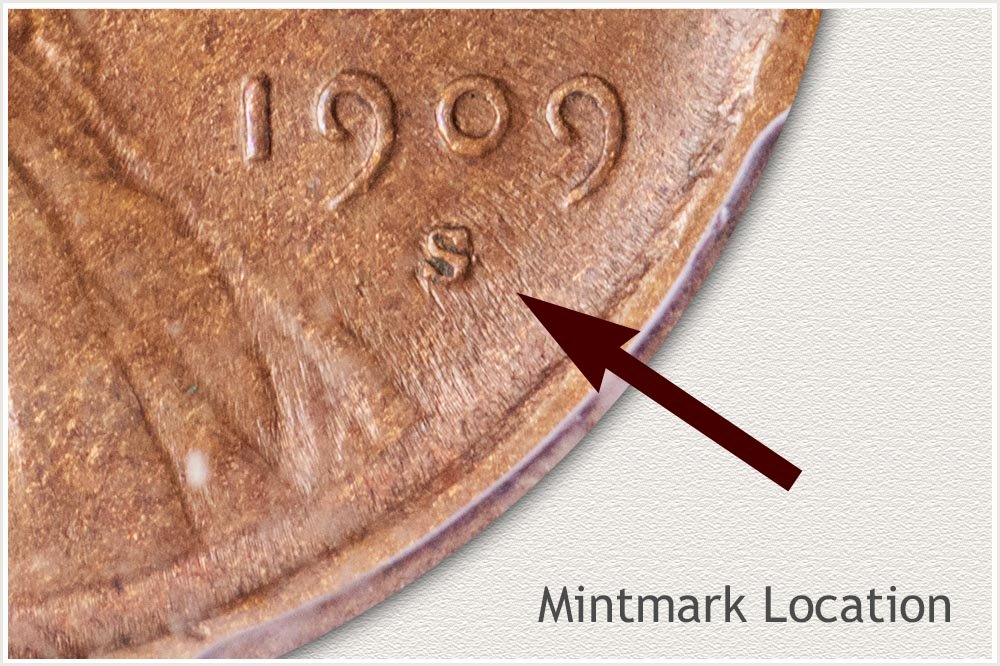 San Francisco mint is known for its typically low mintages of wheat cents per year. Total production of all years (1909 to 1958) of the wheat series is 2.75 Billion "S" mintmark pennies. Followed by Denver with a total of 9 Billion and Philadelphia's 14 Billion cents.

An "S" mintmark is a first indication of a generally higher value coin. San Francisco Lincoln pennies hold a special fascination with collectors. A wide range of values are represented on the chart, including a significant number of key dates, identity is important.

Accurately judge Lincoln penny condition by comparing your coin to images, visualizing its grade. Higher condition means all the difference to collectors and dealers. Value is directly tied to grade. 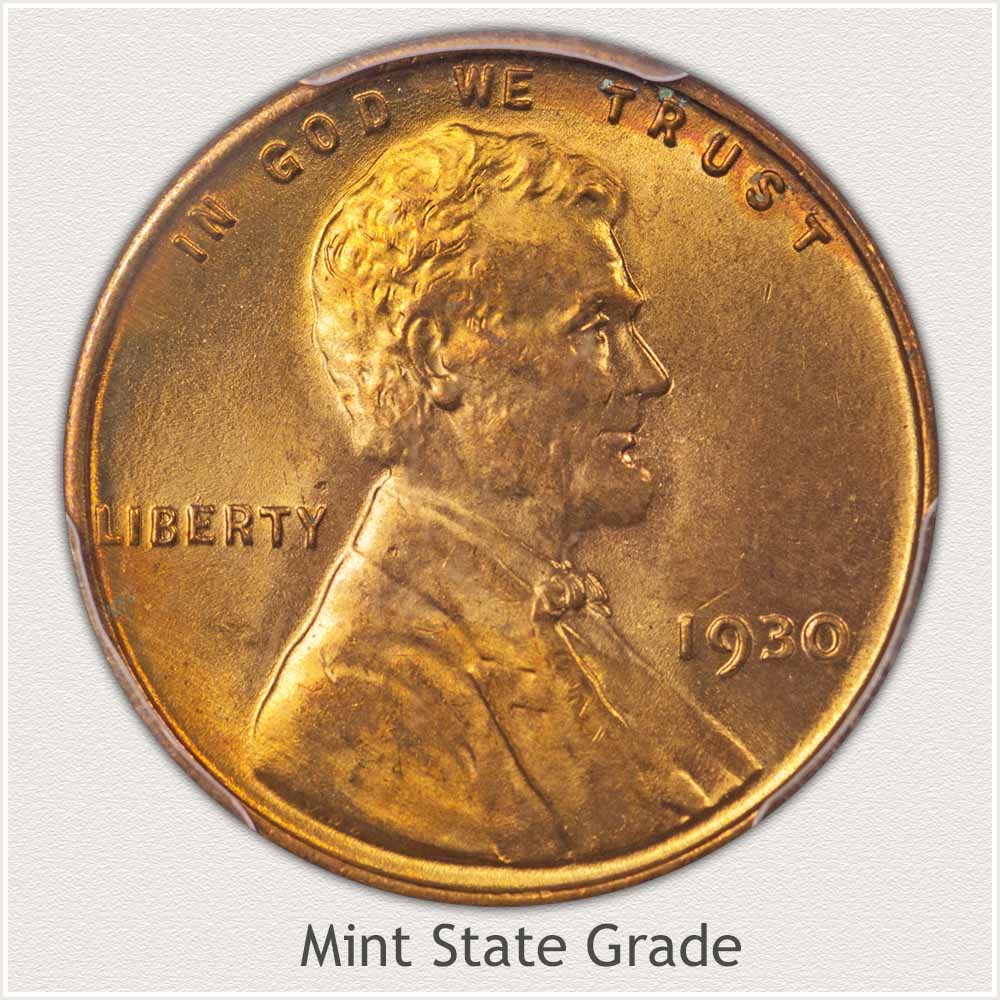 Absence of wear defines the Uncirculated - Mint State grade. These are the top condition coins. Uncirculated condition examples are avidly sought by collectors.

All freshly minted cents are imparted with "mint luster" a shimmer that rotates along the surface as a coin is titled under a light. Inspect the upper most points of the design looking for any signs of wear. A smoothing of the surface, result of wear, is noticeable as a disruption of mint luster. A side-affect to wear is a dulling of the shimmer. 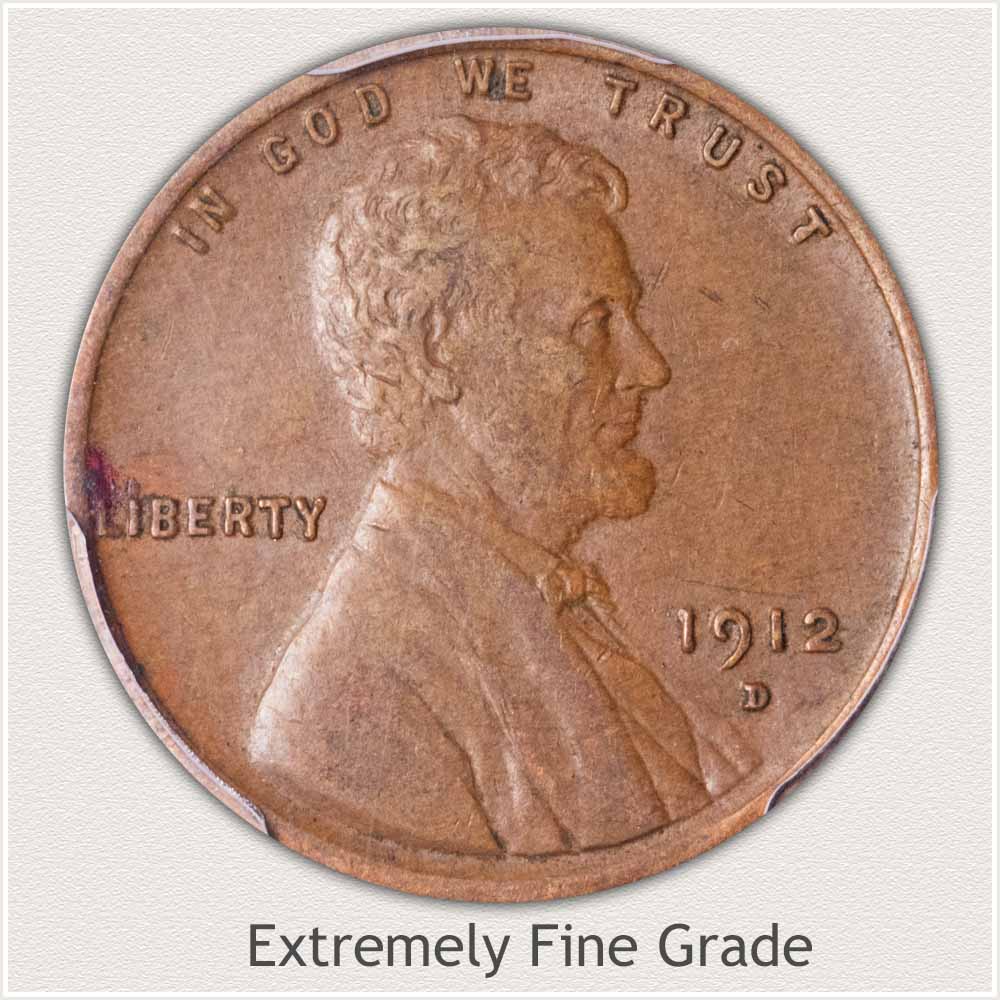 Light wear is visible to the entire coin in Extremely Fine grade. All major design elements remain, noticeable is a small degree of flatness to high profile areas. Lincoln's hair is fully defined, just small disconnected flat spots. Lines to his coat are all separated from the shirt, and bowtie remains distinct. 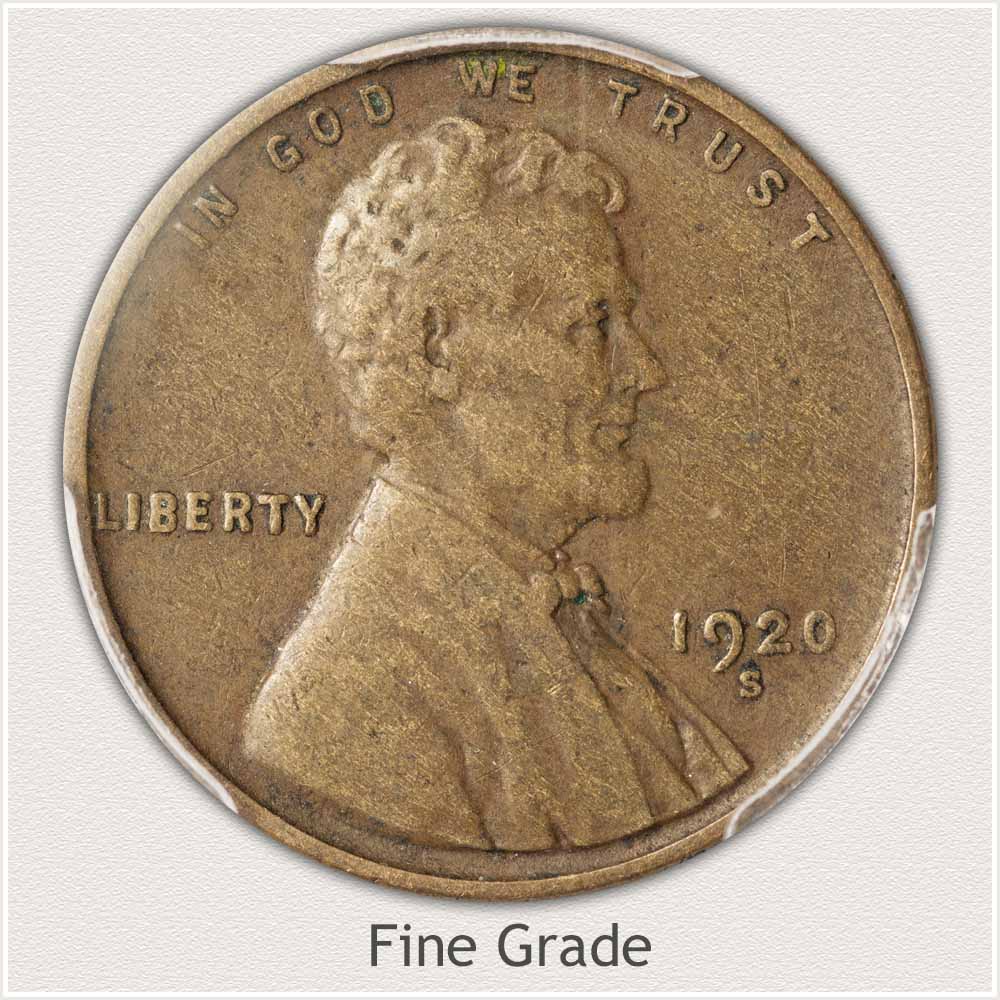 Moderately worn with ample detail remaining defines a coin in Fine grade. All major elements are separate and bold. Lincoln's coat is flattened along the shoulder and lapel. Hair is worn and areas of flatness are now beginning to connect. His ear is distinguishable from surrounding hair. Beard at chin has remaining detail with a roundness to profile. 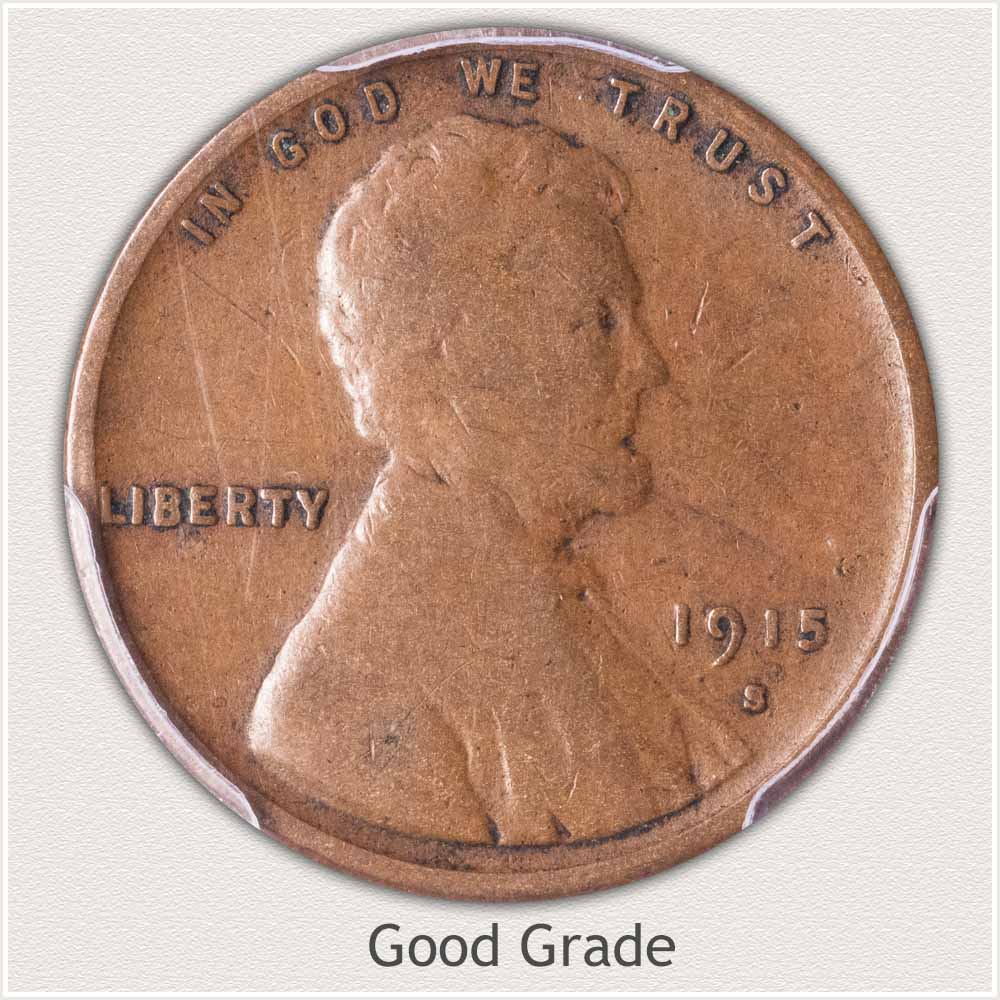 Wear has removed the majority of detail to Lincoln's hair and coat. Cheek and jaw are now one smooth area with little definition. Portrait is still bold with ample detail visible within the shirt.

Lettering along the rim is often faint, however must remain. A pleasing brown to light brown color of pennies is appealing to collectors in this grade, with many early dates showing premium value.

Viewing different grades side by side helps visualize details separating different conditions. Use a single light source when viewing and often a magnifying glass is helpful to bring detail closer.

Judging condition of pennies is partially subjective; degrees of wear and appearance cover the complete range of - new - to worn smooth. After viewing the coin, you develop an opinion, a dealer or collector grading the coin have their own opinions... and they can all differ slightly.

Grading Lincoln Wheat Pennies is a detailed look at defining condition, assigning a grade and how to determine Lincoln penny value. Along with the video, close-up images help you quickly recognize and separate premium pennies. Descriptions bring out the subtle details involved.

Advanced grading by professionals is recommended for the higher value $100+ coins. Collectors and dealers consider PCGS and NGC as leaders in coin grading services. They both authenticate and grade your coin. The small fee you pay provides assurance you understand and receive the full value of your coin. Visit an introductory page to Coin Grading Services

Visual appeal contributes to values of Lincoln Wheat pennies in many ways. How a coin “looks” in total is first to notice, followed by closer examination. Qualities of eye appeal are demonstrated by comparing high to low appeal. 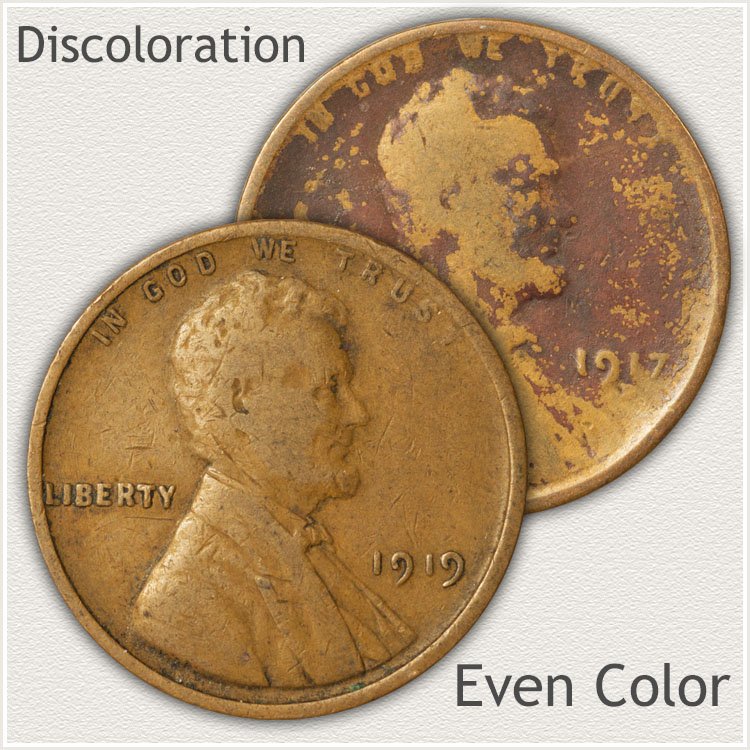 One common fault of copper is a tendency to discolor. Both examples are worn, one stands out as superior because of a nice even toned coloration. A natural look, of age and condition. 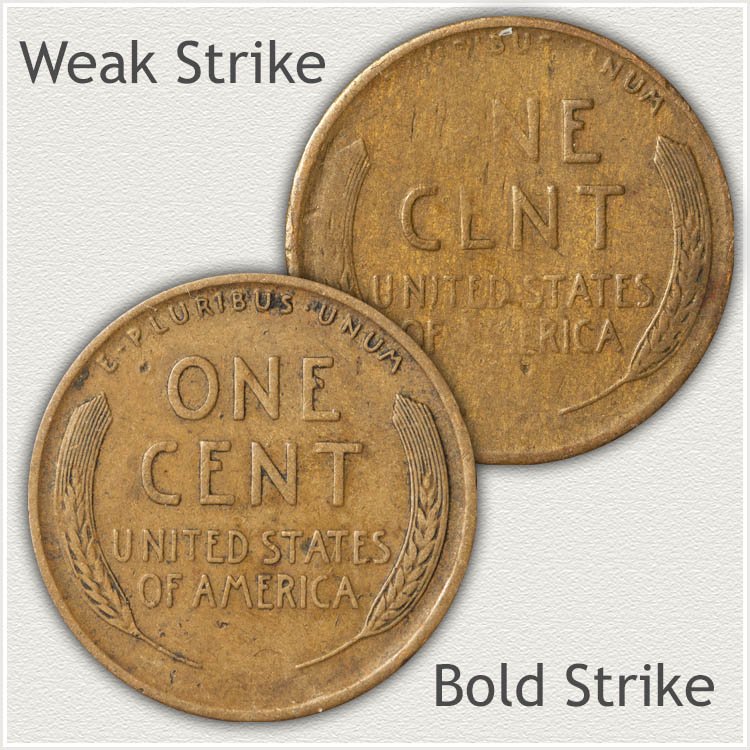 Millions of pennies were struck of most varieties of wheat cents. Not all received a strong, full impression during the striking process. Evidence of weakness is visible and contrasted with a complete striking of "ONE CENT". Faded lettering detracts, also notice the curving of the letters close to the rim. A strong impression is favored. 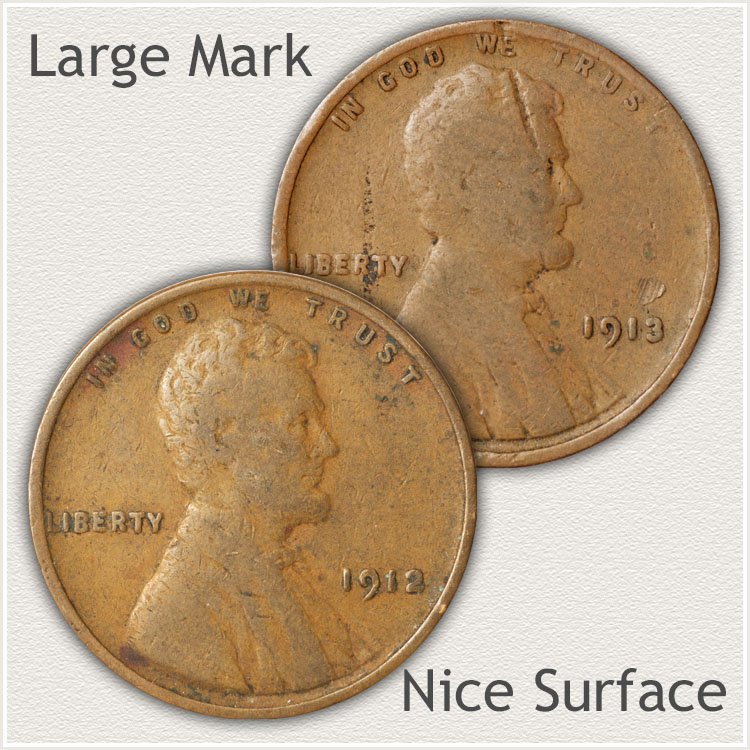 Small nicks and marks are the norm of a circulated coin. Many are diminished by the smoothing involved with wear. A large deep mark stays with the coin. In a main focal area, a noticeable mark visually detracts. Appeal to a collector is lowered, along with potential value.

Underlying support is critical to value in any coin series. Lincoln cents are a series enjoying strong demand by collectors. Their interest and collecting preferences form the basis to how much each coin is worth. 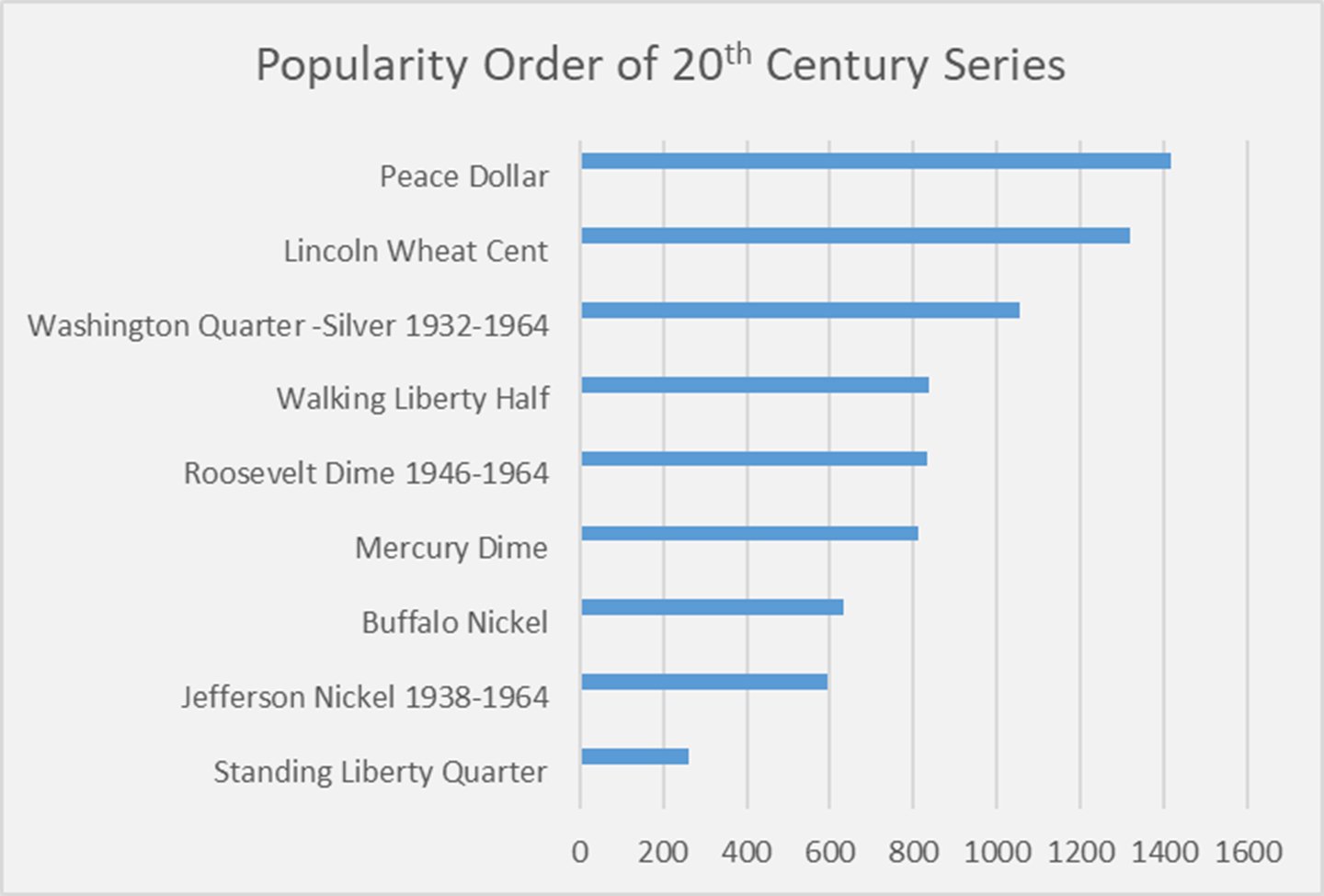 Among 20th century US coins, collecting Lincoln cents places just behind the Peace Dollar series as a favorite with collectors. A study of Registry Set totals identifies popularity of each series by numbers of collectors involved in actively assembling collections. Popular Coin Series is an insight into the coin hobby and US coins by denomination and series.

From the beginning of the Lincoln cent introduction in 1909 an interest to collect the series was strong. By 1958, the conclusion of the series, a notable pattern emerged to values and availability of the dates and mintmarks. Collectors began to recognize two major eras, the first 1909 through 1933 featuring elusive coins and higher value.

A second era 1934 through 1958 is notable for abundance of coins and lower value. Interestingly, a third small sub-group dated 1934 to 1943 is beginning to emerge in value. Choice circulated examples of this sup-group; specifically those in Extremely Fine grade, are developing a strong premium over lesser grades. All adding to the fascination of collecting wheat pennies.

Combining the many themes to collecting Lincoln pennies with a wide range of affordability draws a diverse collecting interest.

From one year to the next Lincoln penny value never stands still. New collectors take up the hobby. Seasoned collectors continually improve their collections. New varieties of over-dates, double-dies, or something different is always discovered and sparking interest in wheat pennies.

Keep in touch with coin values, return to update your Lincoln penny value.

US Treasury. History of the Lincoln Cent. https://www.treasury.gov/about/education/Pages/lincoln-cent.aspx
US Mint. US Mint Reports. https://nnp.wustl.edu/library/publisherdetail/51

Coin values listed. From the earliest Half and Large cents, to Indian head pennies to the popular Wheat pennies of 1909 to 1958. Match your coins to images identifying correct series. Follow a step by step process to accurate value on charts. Some of these old pennies have amazing values.

List your coins and record their values. Should you decide to sell... use the worksheet as a packing slip when sending coins through the mail to dealers. It indicates you have done your coin values homework.

Coin values are determined by using the grading images to judge condition then checking the date and values on the charts provided. Discover all the rare varieties, dates and mintmarks.

All old US coin values. The home page is an excellent index, quickly leading to the major coin series. From Cents to Gold.