Three offerings of sets were produced by the mint and listed on the chart of 2002 US Mint proof set value.

Value of these proof coins is dependent on the particular set, metal composition of the coins and how well the coins and packaging are preserved.

Interest in the State Quarters included in the sets and the number of collectors involved is a strong support to the 2002 proof sets and how much they are worth.

Following are images to identify the particular sets and match your set to the value chart.

Insert separating the coins within both cases is an American flag image colored in shades of blue with white stars.

Outer box holding the two sets portrays an image of the Statue of Liberty toned in shades of blue. The 50 State Quarters Logo is to the right of Liberty. Fifty stars in total are in the top and bottom blue trim.

A Certificate of Authenticity (COA) is included in the box by the mint.

Value of the 2002 10-coin proof set reflects both the interest in State Quarters and the metal content of the coins.

As a separate set to display the State Quarters of 2002; five quarters are housed in one plastic case. The reverse side of the coins featuring the unique designs celebrating the states is set within a two-tone blue US Flag background. This insert is accented with white stars, printing identifying the set and the US Mint Seal.

Obverse side of the quarters are displayed within a solid blue insert, featuring the State Quarters logo in white. The quarters are proof striking's of the same metal alloy as circulating coins, a copper nickel clad alloy.

Included as part of the set is the box holding the plastic case. An American Bald Eagle in profile presented in shades of blue. A blue top and bottom border printed with 50 total stars frames the eagle. The reverse of the box features a map of the US with the states celebrated in 2002 highlighted. Under the US Mint Seal lists the states and entry date into the Union. A folded Certificate of Authenticity noting the date of the quarter proof set is included.

Identifying the precious metal offering of silver proof coins in 2002; a red color scheme is used within both the cases and packaging.

Two plastic cases house the 10 proof coins. Lincoln cent through the Sacagawea dollar in one case. Five State Quarter are in the second plastic case. Within each case the insert holding the coins is printed with a US Flag graphic in shades of red with white stars. White lettering and US Mint Seal. Opposite side of insert within the plastic case is solid red with lettering and logo in white.

One box housed the two plastic cases. On the front of the box the upper profile of the Statue of Liberty is presented in shades of red. 50 State Quarters Logo in blue and red along with "United States Mint Silver Proof Set - 2002" printed in red. A more complete flag graphic is the reverse of the box. Certificate of Authenticity noting the date and silver composition of the set is included.

2002 US Mint proof set value is supported by the silver contained in the set. The Roosevelt dime, five State Quarters and the Kennedy half dollar are 90% silver in composition. Silver per ounce is $18.56 as of 9/26/2022 resulting in a strong base value of $24.84 . 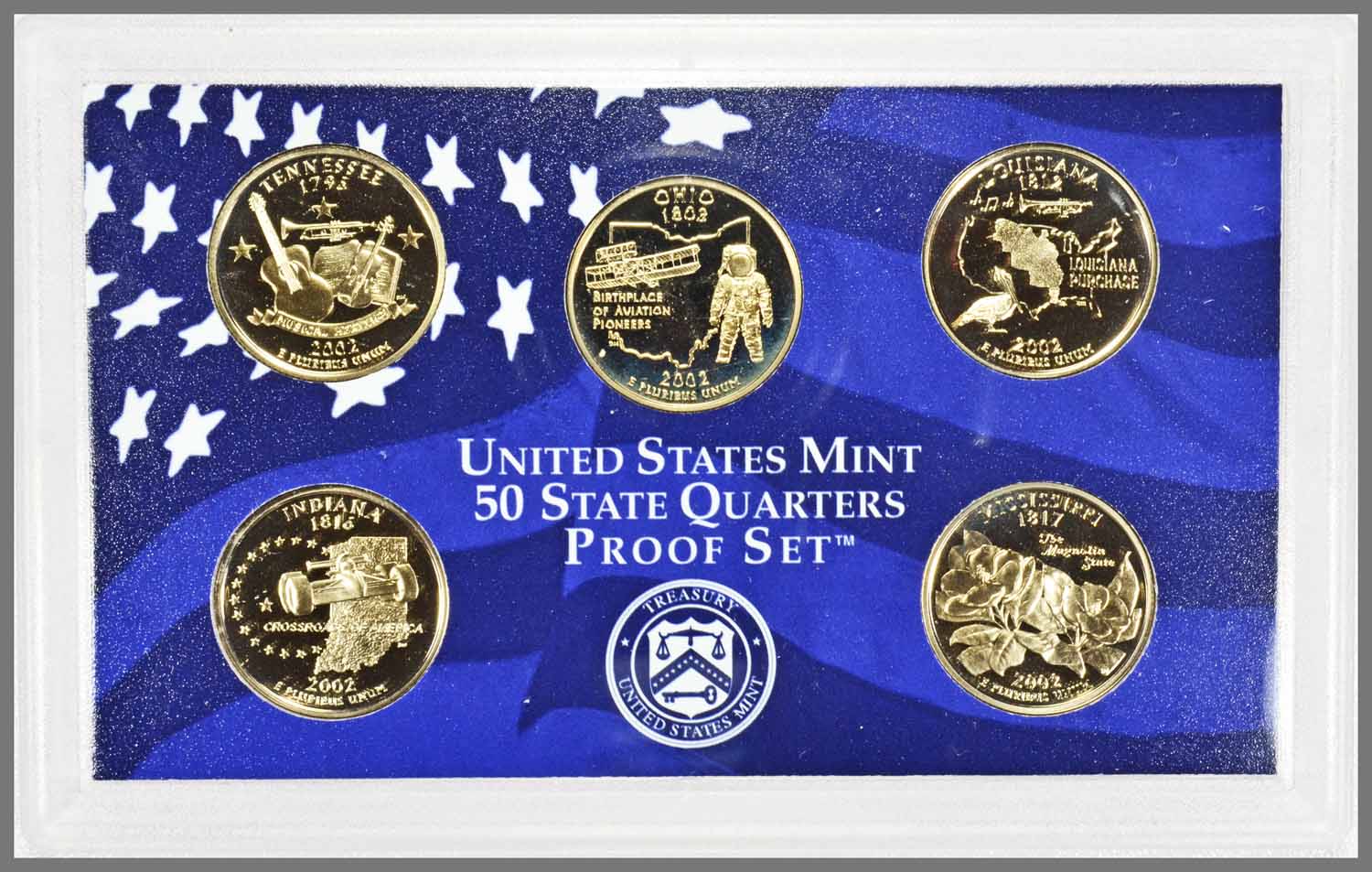 Joining the union in 1796, "Musical Heritage" displayed on the ribbon, was chosen as the theme of the Tennessee State Quarter.

Proof versions of the design are well detailed featuring a guitar, a fiddle and trumpet in the foreground. The music book in the background is exceptional in its rendering. A great deal of depth and dimension to the design of the musical sheets and minute rendering of the notes is recognizable.

Three bold stars frame the instrument display. Emblem upon the state flag of Tennessee is of three stars within a blue field, symbols of the diverse terrain and regions of Tennessee. East Tennessee with its mountains, middle Tennessee an elevated plain and west Tennessee including the Tennessee Bottoms leading to the Mississippi river.

Ohio's State Quarter adopted the theme "Birthplace of Aviation Pioneers". An impressive Astronaut in a space suit is in the foreground.

Flying from the outline of the state is the first powered flight of the Wright brothers. Ohio the birthplace of men involved in the beginnings of flight itself and entering space.

The single line, outlining the state, frames the importance of the men from Ohio and their accomplishments.

From the Louisiana Purchase the current state is denoted by the area below the line bisecting the textured area.

Waterways were an important resource to commerce and development of early settlement. The Pelican rendered in fine detail represents theses abundant birds found throughout the delta of the Mississippi River system running through Louisiana. A popular choice "The Pelican State" as the official nickname to the state.

Music forms a rich heritage to Louisiana culture, with many styles originating from the state. The trumpet represents these styles, notably jazz. New Orleans has a great impact both past and present on musical development.

Symbolism on the Indiana State Quarter begins with the 19 starts. They represent Indiana's 19th position entering the Union. The larger of the stars is reminiscent of the larger 19th star as part of the Indiana state flag.

Racing forward is a detailed Formula one race car. Indianapolis speedway was host to the United States Grand Prix in 2002. The car is positioned over a textured map of the state. Motto "The Crossroads of America" speaks to Indiana's central location within the country geographically. It became critical to America and its development from the east to west.

Detail and depth of design of the magnolia blossoms and leaves is stunning on the Mississippi State Quarter. The date above the magnolias - 1817 is the year Mississippi joined the Union.

An important timber resource to Mississippi the Magnolia tree and flower has become the official state tree and nickname "Magnolia State".

Year the State Quarter entered circulation - 2002 is noted along the lower rim of the coin.

Sales of Proof sets continued to increase in 2002 over 2001. Introduction of new collectors via the State Quarter Program and the Mint's commitment to meet the demand, shows in the higher total mintage of all proof coins. The mint estimated 130 million people were collecting State Quarters, in one way or another. This helped to raise the combined sales of their annual proofs sets to over 3 million. 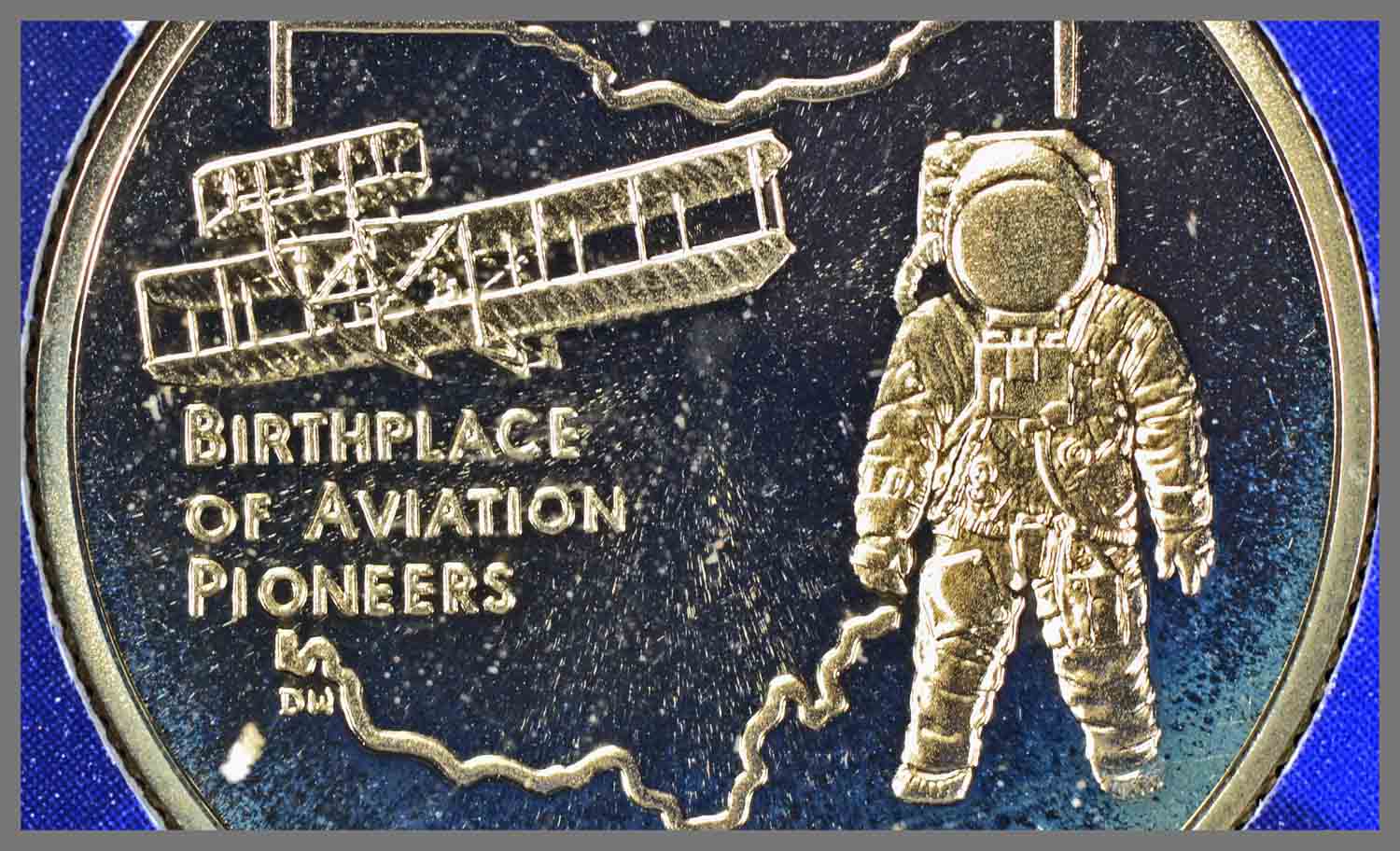 First in Flight and Space: The Ohio State Quarter

Orville Wright born in Ohio was the pilot of the multi-winged aircraft to take first flight in 1903. The Wright Flyer I aircraft is rendered in very fine detail within the design of the quarter. Viewed from the front, Orville flew the craft from the prone position, and is visible in the detail on the quarter.

An astronaut in a space suit represents the exploration of space. Neil Armstrong also from Ohio was the first person to step foot on the moon. The space suit detail on the Ohio State Quarter is faithful to the suit worn by Armstrong and Buzz Aldrin on the Apollo 11 mission.

High quality detail rendering of the aircraft and astronaut is exceptional.

The coins within the proof set themselves are the main focus of value to the set. However, completeness of the "set" improves its market acceptance. Collectors buying proof sets consider the box containing the plastic cases as part of the set. Additionally, the certificate of authenticity (COA), a folded card insert original to the packaging is needed to complete the set.

Condition of each 2002 proof coin is inspected. Gem quality is the original condition of the coins when leaving the mint. Look at the surfaces of each coin, note the brilliance and haze free condition. Well cared for coins retain a stunning mirror to the fields and an even "frost" to the designs and devices. Prone to spotting and hazing is the Lincoln cent, deep reddish brown is acceptable.

Metal composition of the proof coins ranges from the outer copper of the cent, nickel of the clad coins, silver of the 90% alloy dimes, halves, quarters and manganese-bronze of the dollar. Each when exposed to air, develop toning - change of color.

An additional important part to desirability is the condition of the box used to house the plastic case(s). These boxes are light weight, easy to dent and crease. Tabs to closures are also fragile. Avoid marking the case with pen and pencil.

Storage of your sets is important. A small plastic storage box to contain the sets is ideal protection. With a closable lid your sets are easy to pack to a shelf and safe from damage. Maintaining value of the proof set is enjoying the coins and a gentle handling of all parts to the set.

Complete listing of the era of proof sets. Beginning in 1955 proof coins were packaged as sets and a popular collectible began.

All US coin values. Identify your coins using the image links leading to value charts. Additional points to value are considered:
Date | Mintmark | Condition: each described and imaged within each series. Surprising value is found in the smallest of detail.