Expanding 2004 US Mint proof set value was the addition of a new set option. The number of annual proof sets grew to four individual choices.

Each of these four different sets are valued separately on the chart.

Identify the different proof sets of 2004 using the images and descriptions below.

Introduction of the Westward Journey Nickel series adds to the appeal of the 2004 proof set. 11 proofs representing the circulating coins of 2004 are in two plastic cases. All coins are the same metal alloy as regular issue coins.

Lincoln cent through Sacagawea Dollar, including two different designs of Jefferson nickels are displayed in one case. Holding the coins within the case is a two-tone blue insert with a US flag image. Printing on the insert of stars and text is in white.

A second plastic case displays the newest addition of five State Quarters. Insert holding the coins is also the blue flag graphic, stars and lettering with the addition of the US Mint Seal printed on the insert.

Outer box, considered part of the set, presents the Statue of Liberty in blue tones. Printing to the right is a Mint Logo over the description of the set and year, 2004. A folded Certificate of Authenticity with further details of the coins is included within the packaging.

Holding the quarters in position is an insert displaying an American flag in shades of blue with stars and text in white. The US Mint Seal is also in white. Text identifying the unique State Quarters proof set completes the design of the insert. The opposite side (obverse side of the coin) the 50 State Quarters logo is printed in white on a sold blue background.

Packaging includes the Certificate of Authenticity; a folded card within a cardboard box sized to fit the one plastic case. A Bald Eagle graphic in blue helps identify the set. On the reverse of the box is a map of the US states with the 2004 states represented in a lighter shade of grey with the states listed to the side.

Of special note: Introduced are two new Jefferson nickel designs minted in 2004 only.

Within each case an insert printed with the US flag in light and deep shades of red hold and separate the coins. Stars in white as well as text complete the insert design. The opposite side of the insert is a solid red with text and logos in white.

An outer box holds the two plastic cases and is considered part of the value. The face of the Statue of Liberty in red combined with the US Mint Seal over red text describing the silver 2004 proof set. Also important to completeness of the set is the Certificate of Authenticity (COA); a folded card included in the packaging.

Seven coins within the 2004 proof set are 90% silver; dime, half dollar and the five State Quarters:

Now available in a separate option, all five silver State Quarters as a single set. One plastic case featuring the red flag graphic printed with white stars and "United States Mint 50 State Quarters Silver Proof Set" also printed in white. This case is a match to the case housing the quarters in the 11-coin silver set.

Separating the identity of the new silver 5-coin only proof set offering is the outer box. A silver-grey color theme helps to identify this new set offering of proof State Quarters in 2004. A Bald Eagle image with the 50 State Quarters Logo over text in grey. The silver-grey theme continues on the back of the box, flag image behind the map of the states with the 2004 states in lighter shade. A Certificate of Authenticity completes the set. 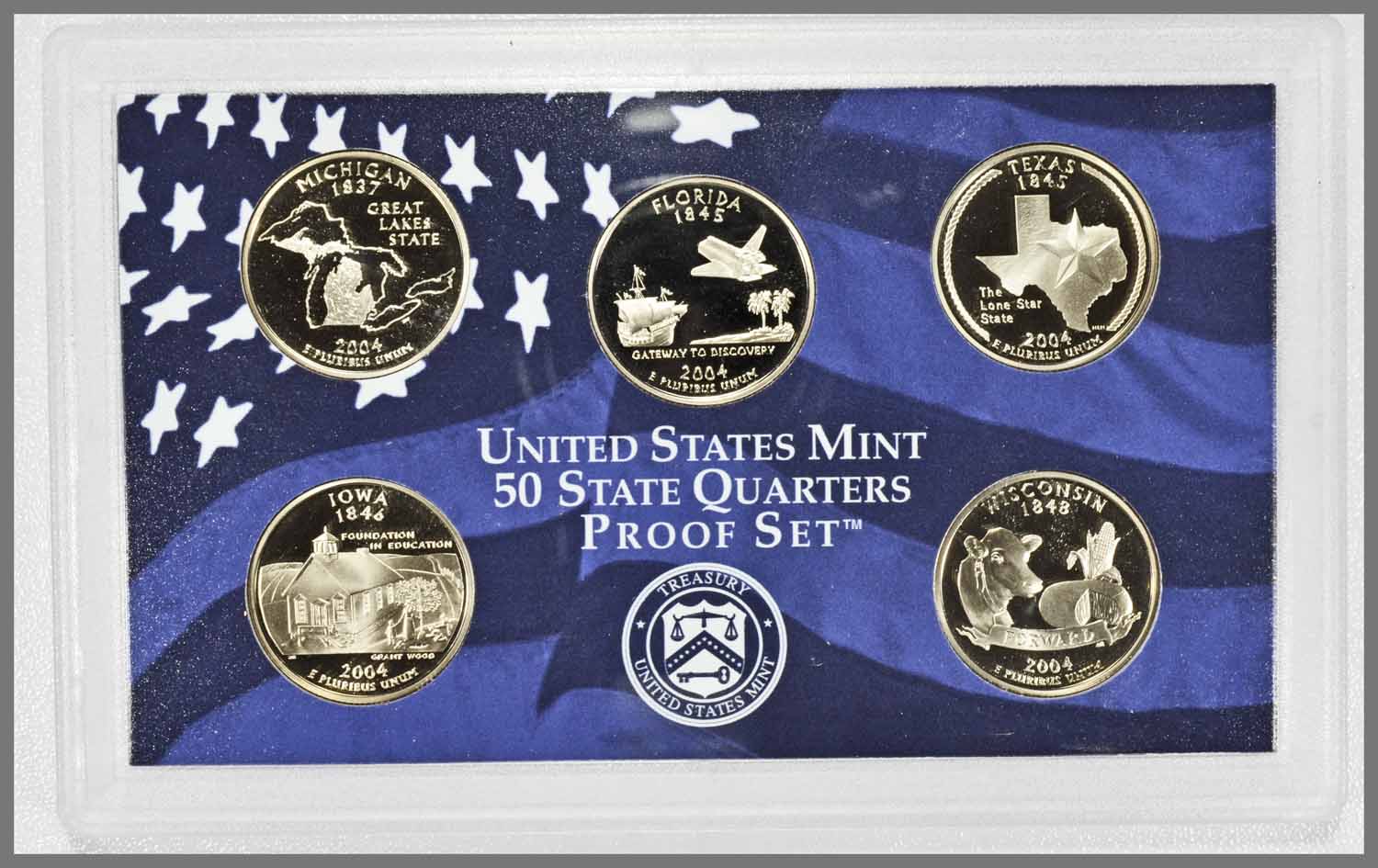 Michigan is located among the Greats Lakes and its waterways that contributed to the state's importance and early development. Exploration of the region and westward movement was aided by lakes, rivers and stream travel. Michigan today leads in automobile manufacturing.

Adopted as the official nickname "The Great Lakes State" is displayed on the state quarter,

It helps to envision the design of the quarter with the textured areas as the land mass of Michigan and the outlines representing the area covered by the Great Lakes.

1837 is the year of statehood and 2004 is the year the Michigan State Quarter was issued.

A Spanish Galleon and the Space Shuttle are highly detailed on the Florida State Quarter. Posed to signify the past to present of historical Florida. Galleons defined as having multiple decks and masts is easily recognizable in the design. An iconic Space Shuttle advancing into space depicts well the modern space achievements.

Palm trees along a sandy beach highlight Florida's location at the southern end of the east coast.

Entry into the Union is marked by 1845 dated above the designs, and issue date of the quarter 2004 in the lower area.

Released into circulation in June of 2004 the Texas State Quarter features a dramatic design. A frosted raised area in the distinctive shape of Texas. Overlaid the state design is the five-pointed star representing the huge land area of Texas as one.

Continuing the theme of independence and one; the state's nickname "The Lone Star State" is featured within the design as well.

Mint description of the lariat forming a border either side of the central design is an important item in the cowboy life, cattle ranching and a necessity on the frontier.

At the very top of the quarter "Texas 1845" represents the year Texas became a state.

With "Foundation in Education" as the message on the Iowa State Quarter a school house is the main design. Becoming a state in 1846 is noted over the design and 2004 - year of striking the quarter is placed below the design.

An agricultural region at the time of statehood, Iowa has grown and developed with the times and credits its success with the focus on education. School houses, as depicted, supported this process.

United States Mint Director Henrietta Holsman Fore during first release ceremony expressed desire the quarter when carried by children would become our 'Education Quarter'. Each child attending the event was given a newly minted quarter.

Full of symbolism the Wisconsin State Quarter displays the economic power of the state. "Forward" the state motto inscribed on the ribbon projects the states intentions.

Fertile lands support the immense agricultural production in turn fueling the dairy herds, both combining and helping Wisconsin lead in the production of cheese.

Wearing a well detailed bell the large portrait of a Wisconsin cow is gazing over the state motto. A sliced round of cheese with an ear of corn; complete with highly engraved kernels; finish the major elements of the design.

Admission to the Union - 1848 is located above the design with 2004 indicating year of issue of the State Quarter. 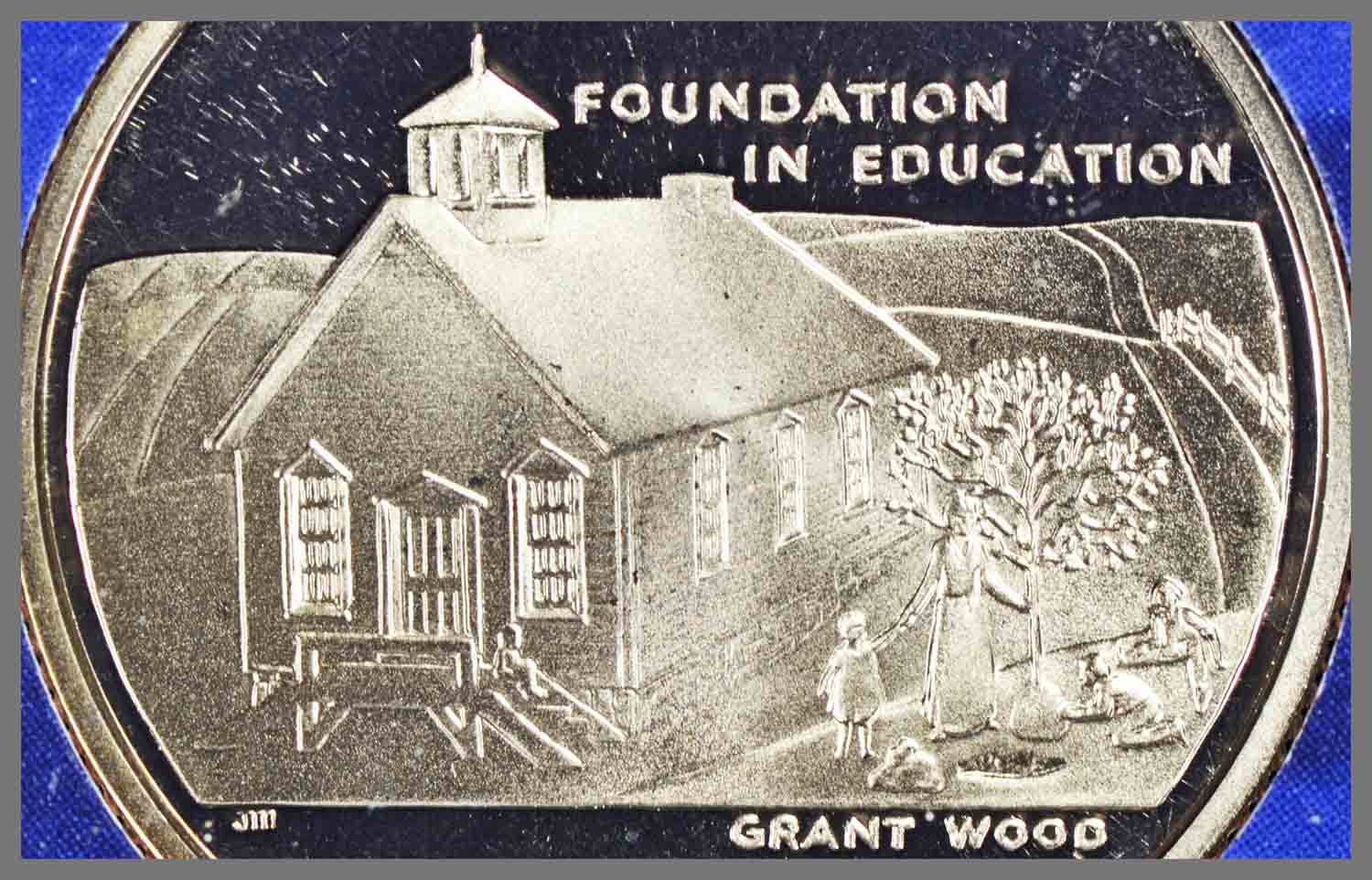 Highly detailed and panoramic in scope describes the Iowa State Quarter design. A valuable heritage is noted in the theme "Foundation in Education" inscribed.

A one room school house, important to the time and found throughout early Iowa, is depicted including many architectural elements. Framing of the windows, door and entry steps are all recognizable. Looking closely at the structure a stone foundation and chimney is noted.

Holding hands with the teacher is a student in dress as the teacher helps plant a tree. Rolling hills on the background depict the Iowa terrain with a rail fence separating the agricultural fields.

Inspiration of the design is credited to the painting "Arbor Day" by Grant Wood. An artist throughout life, Wood is a native-born Iowan.

Excellent small detail is captured and rendered by the mint designer: John Mercanti. 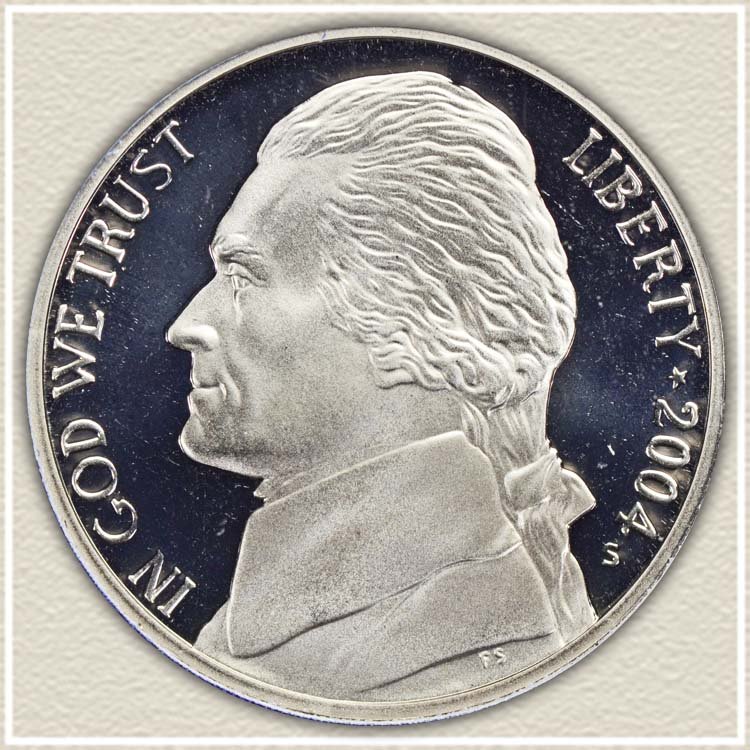 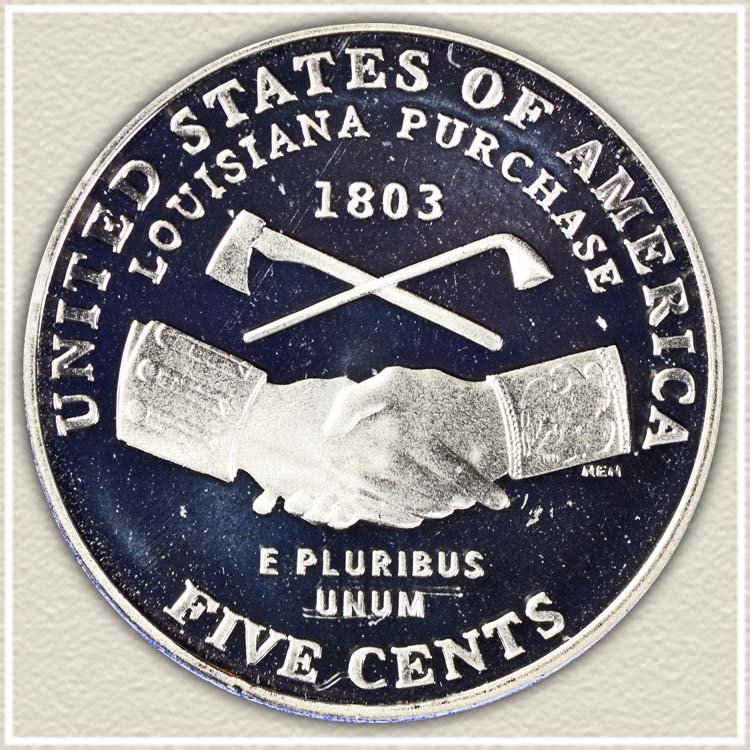 2004 marks both the bicentennial of the completion of the Louisiana Purchase and the launching of the Lewis and Clark Expedition. Thomas Jefferson was instrumental in both. The US Mint in celebration redesigned the reverse of the Jefferson nickel in 2004 to include a Peace Medal reverse and second reverse in 2004 featuring a Keelboat design. Launching the Westward Journey Nickel Series. Of Note: these new designs remained for one-year 2004 only.

The Peace Medal Nickel was the first new design to the Jefferson nickel since the original in 1938 and began the Westward Journey Nickel Series. The reverse is a well detailed relief of two hands in hand shake, a symbol of peace. One hand is displayed with a cuff of a military uniform featuring an eagle, representing the American government. The other hand wears a band with beads, recognized as native Americans. Also recognized as peace is the crossed tomahawk and tobacco pipe. This design represents the design on actual Peace Medals carried by Lewis and Clark on their journey to present to the chiefs of tribes encountered on the way. 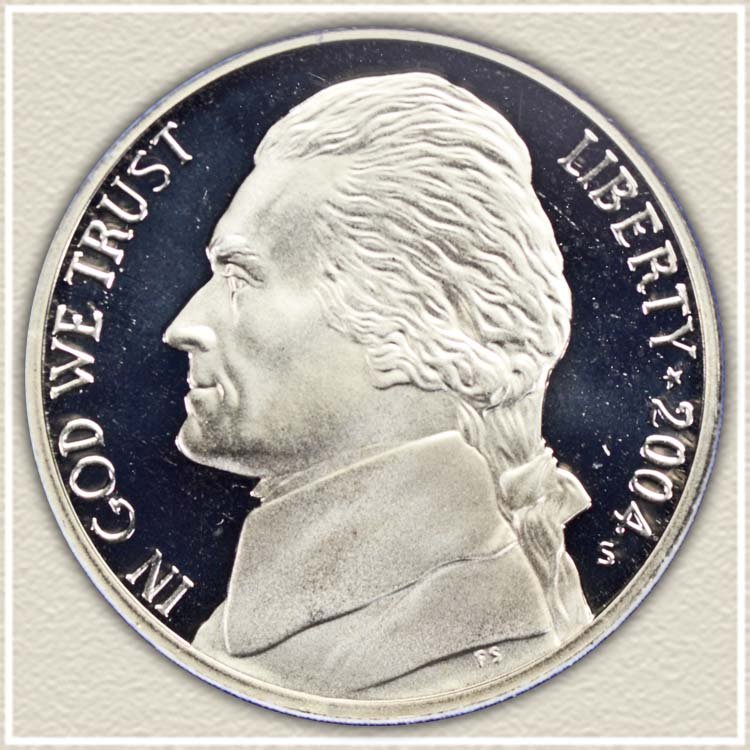 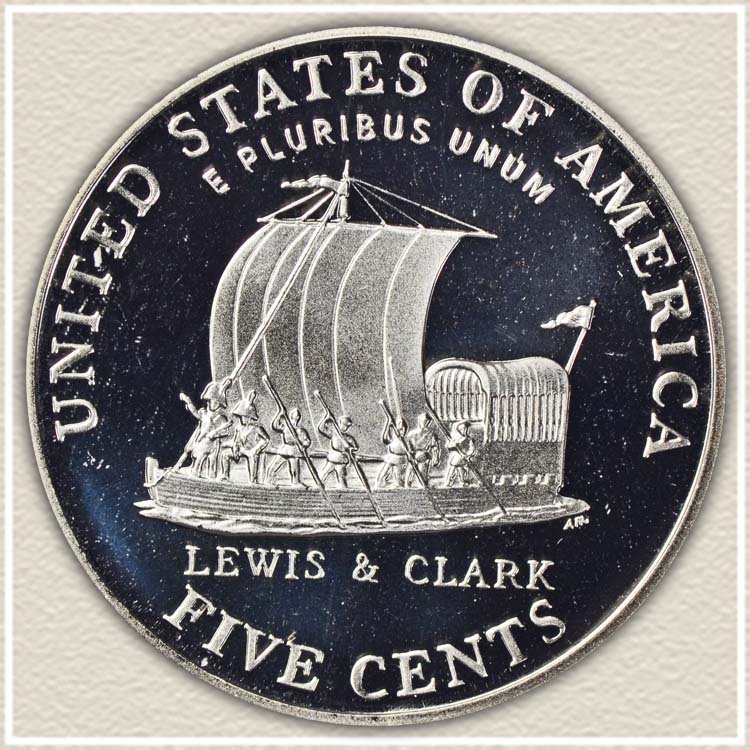 June of 2004 introduced the second new reverse design; The Keelboat Nickel. An invaluable craft on the journey exploring a westward water route to the Pacific. Seen in great detail within the design, Lewis and Clark set out in a Keelboat on an official expedition the Corps of Discovery.

Detail of the design portrays the Keelboat under sail and powered by poles. A rugged craft able to carry the needed supplies and crew. Lewis and Clark are seen in the engraving at the bow wearing military uniform.

Proof versions of the coins produced with the added preparation of the dies and double striking to bring out the smallest of details adds value and appeal to collectors. Both of these nickels were struck in 2004 only. A new and one year of design for the Jefferson nickel.

2004 was an important year in proof set coinage. New nickel designs replacing a long-standing Jefferson nickel, plus the continuation of State Quarters series and introduction of the separate silver State Quarter option. Each of these additions form a part necessary to many proof set collecting themes. Nickel collectors need the new proof designs, silver proof coin collectors and those completing a State Quarter collection also need this set.

Complete value chart of the popular proof sets issued by the US Mint. Beginning in 1955 annual proof coins were packaged as sets. Identify your sets by the images, confirm their completeness and preservation. Determine how much they are currently worth.

All US coin values. Identify your coins using the image links leading to value charts. Additionally: each coin is studied:
Date | Mintmark | Condition
important details are described and imaged within each series. Surprising value is found in the smallest of detail.