Annual offerings of proof sets in 2005 includes five distinct options. Each 2005 US Mint proof set value is listed separately on the chart.

Special to 2005 are two new - one year only - proof Jefferson nickels included in some of the sets. Also, the American Legacy series of proof coins began. A high-end set the American Legacy collection introduced two commemorative silver dollars along with unique display cases of the proof examples of the circulating coins of 2005.

Identifying your particular set from those sold in 2005 and judging its overall condition is important to determining how much it is worth.

11 Proof coins representing the circulating coinage of 2005 are displayed in two matching plastic cases. These coins are the same metal alloy as business (circulating) coins.

In one plastic case are the Lincoln cent, two Jefferson nickels, Roosevelt dime, Kennedy half and Sacagawea dollar. Insert separating the coins is an American Flag printed in shades of blue highlighted by white stars and text. Reverse of insert is solid blue and a small, centered US Mint Seal printed in white.

Five State Quarters minted in 2005 only are displayed in the second plastic case. Insert matches the blue tone flag and lettering of the first case.

Completing the set is an outer box sized to hold both plastic cases along with a folded Certificate of Authenticity card. Theme of the box is a blue tone graphic of the upper part of the Statue of Liberty on a white background. Lettering in blue with the US Mint Seal accented with red stripes to the US flag are beside the image.

With multiple set options sold by the Mint, compare your set to the images for conformation. Handle both the plastic cases, boxes and pagers gently to preserve value.

Insert displaying the quarters is a US Flag image portrayed in deep to light shades of blue. White starts and text printed on the insert along with the US Mint Seal complete the design to the insert.

The set was shipped within a light weight box featuring a Bald Eagle image. Blue tones are also the color theme including the text. Logo signifying the State Quarter program is over 2005 printed in silver. Along the bottom lists the states honored. Reverse of the outer box continues the tradition of a map of the US with the 2005 states highlighted. Completing the set includes the original Certificate of Authenticity.

Two plastic cases holding the 11 coins, an outer box and the Certificate of Authenticity are all part of the 2005 silver proof set. One plastic case houses the Lincoln Cent, two newly designed Jefferson nickels, the Roosevelt dime, Kennedy half dollar and Sacagawea dollar.

Both cases feature a flag graphic in shades of red with white stars and lettering. Of note, the text printed on both inserts confirms the silver proof set. Outer box is also in shades of red featuring the Statue of Liberty, red lettering and the US Mint Seal; blue and red.

As an option to those collectors of the silver proof State Quarters series, a separate choice was available to obtain these quarters as a single set.

The 2005 State Quarters are displayed in a single plastic case. Insert holding the coins is in shades of red of the US Flag. White stars and lettering indicating the silver set is printed above the US Mint Seal.

An outer box is distinct from the other sets of 2005 by its silver-grey color theme. A Bald Eagle image is to the left of the US Mint Seal and lettering. Completing the set and packaging is a folded card Certificate of Authenticity.

Silver is a strong support to value along with the collectability of the State Quarters. Base silver value of the set: 12/5/2022 | $20.93

Both proof commemorative dollars are 90% silver, proof coins representing the cent through Sacagawea dollar are of the same alloy as standard circulating coins of 2005.

Inner case repeats the outer box design and folds open to a central black textured tray holding the plastic cases containing the coins. Opening flaps are a red background with historical details of the Silver Dollars printed in black. Back of set hinges open to allow upright display.

Completing the total packaging is a sleeve holding the Certificate of Authenticity. A very nice display highlighting the proof coins measuring 10.5x20 inches when open. 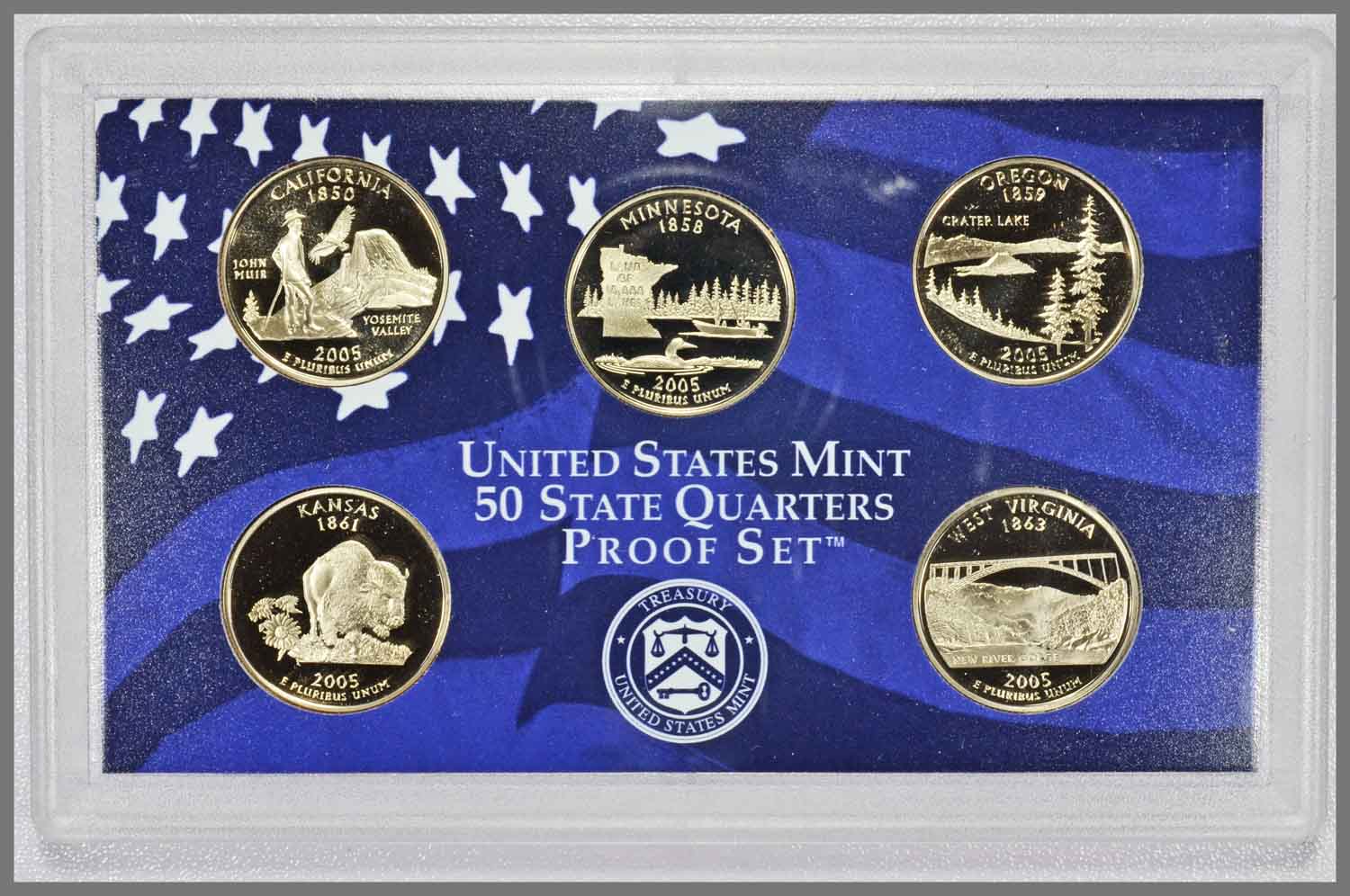 Popularity of the State Quarters Program continues adding value to the 2005 US Mint proof sets.

With a wide-angle view of Yosemite Valley, the California State Quarter highlights the achievements of John Muir.

Entering the Union in 1850 is above the scene with 2005 dating the year of the quarter entering circulation.

Pictured is a California condor in front of a view of the spectacular Half Dome, a granite formation.

Minnesota's official nickname and also the theme of the coin "Land of 10,000 Lakes" is portraited within a textured outline of the state.

A lakeshore in the background is well detailed with vegetation and trees leading to a shoreline. Gliding on the water, foreground is a reconzible common loon - great northern diver. Fisherman in a small boat are also enjoying the resources provided by the many lakes.

All elements of the design are rendered in high detail. Identifying the state and 1858 its entry into the union is above the design. Along the lower edge is 2005 signifying the year the state quarter entered circulation.

Of note: the Mississippi river traces it source to Minnesota and is found in Itasca State Park, a protected wilderness since 1891.

Oregon celebrates one of its natural wonders; Crater Lake on the reverse design of the State Quarter.

Crater Lake recorded to a depth of 1,949 feet is considered the deepest lake in the US. Its beautiful deep blue color and scenic setting is viewed by visitors to Crater Lake National Park.

Well detailed within the lake design is a rendering of Wizard Island and framing the background of the rim are Watchman and Hillman Peaks.

Noting Oregon's entry into the Union - 1859 is minted at the top. Year of the State Quarter production and circulation is 2005 along the lower rim.

Designed by Norman Nemeth the reverse of the Kansas State Quarter is impressive in its detail. Kansas whose official state symbol is a sunflower and also state nickname is referenced on the quarter with three highly engraved sunflowers.

Striding forward is an iconic symbol of Kansas the American Bison. Flat to rolling terrain of grasslands support herds of bison to this day. Looking closely at the design; intricate detail finds a well-defined head, horns, eyes and the long fur notable to the bison. Both the sunflower and buffalo are represented well.

Kansas is celebrated as entering the Union in 1861 at the top of the quarter. 2005 issue date of the State Quarter is below the design. "E Pluribus Unum" (Out of Many, One) - in its permanent position thought the entire State Quarters series, is along the lower rim.

West Virginia State Quarter displays the rugged beauty and achievements of the state.

Central to the design and portraited edge to edge on the quarter is the New River Gorge Bridge, an engineering triumph of 1977. Constructed of steel, the 1,700-foot arch supports the 3,030 ft. long bridge. All towering 876 feet above the New river below.

Forming the background to the bridge is a very detailed view of the New River Gorge identified on the design. The waterway; The New River flowing under the bridge is considered one of the oldest rivers in the world. Landscape of the scene includes well detailed trees, ridges and rock outcroppings at rivers edge. Life scale of the design depicts a scene hundreds of acres in dimension.

West Virginia entered the Union June of 1863 minted at the top of the design. 2005 denotes the year the State Quarter was struck and entered circulation. 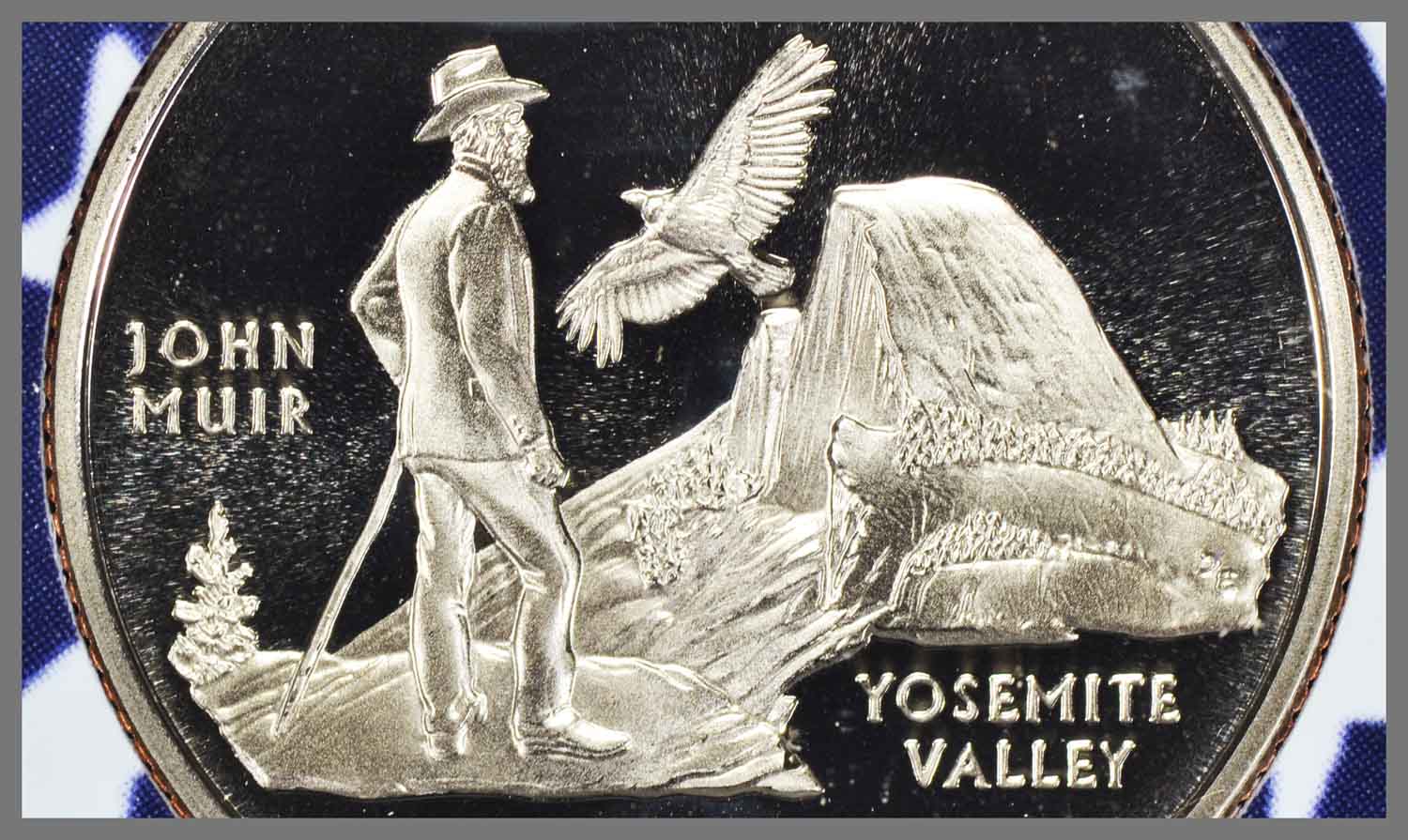 John Muir's achievements are celebrated by the California State Quarter

Muir is depicted overlooking Half Dome within Yosemite Valley, well detailed his walking stick and profile include details of his dress and beard.

In fine detail is a California condor, recognizable are distinct feathers along the outstretched wings. These birds and many other species remain today by efforts of Muir and the Sierra Club he co-founded.

Half Dome recognizable by the distinct shape, completes the scene. With a height of 4,700 feet and formed of granite it has become a symbol of the natural wilderness of Yosemite. Depicted in great detail the dome and shear face are framed by the intricate engraving of the forest of trees.

Value of the 2005 proof set includes the enjoyment of all State Quarter designs. Designer: Alfred Maletsky 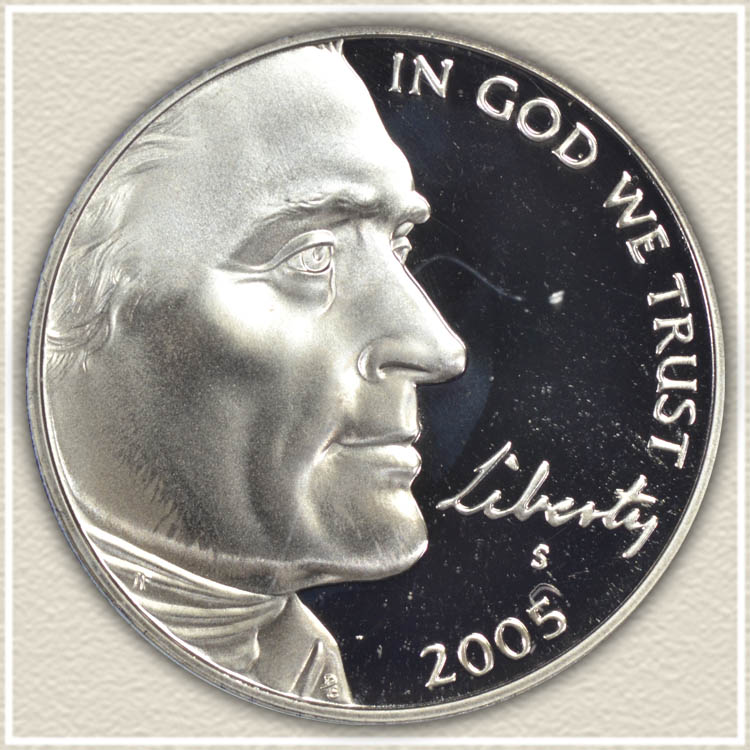 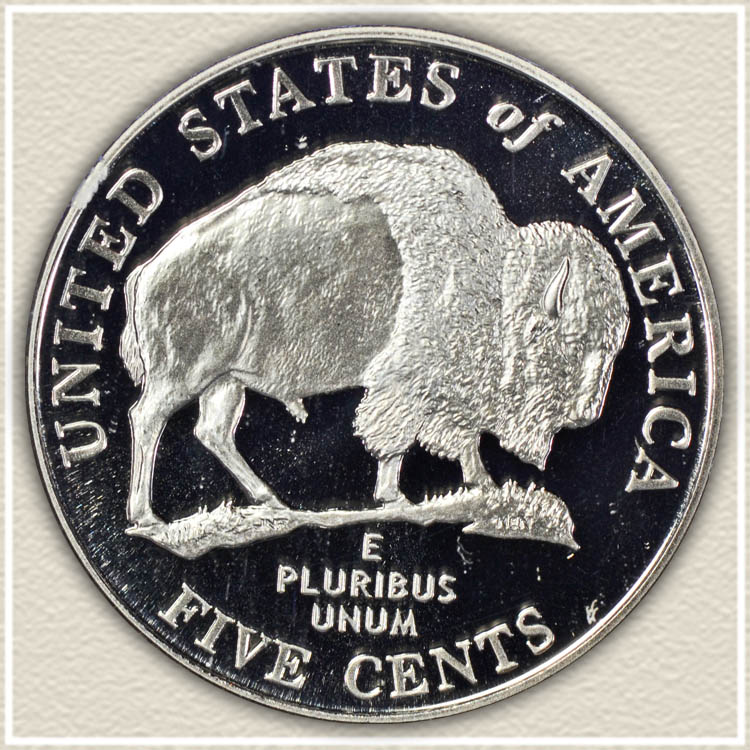 Adding collectability to the 2005 proof set are two new nickel designs. These nickels continue the celebration of the bicentennials of the Louisiana Purchase and Lewis and Clark expedition. The American Bison and Ocean in View nickels are part of the US Mints Westward Journey Nickel Series.

A new Jefferson portrait is introduced with the 2005 nickel. A closer image of Jefferson and now facing to the right in ¾ view. Depth of detail in the features is impressive. "Liberty" in script over the date is representative of Jefferson's own handwriting.

Reverse of the proof version of the 2005 American Bison nickel design is impressive in its detail. Filling most of the coin the bison was described in Lewis and Clarks journals as central to many Native American cultures they encountered. 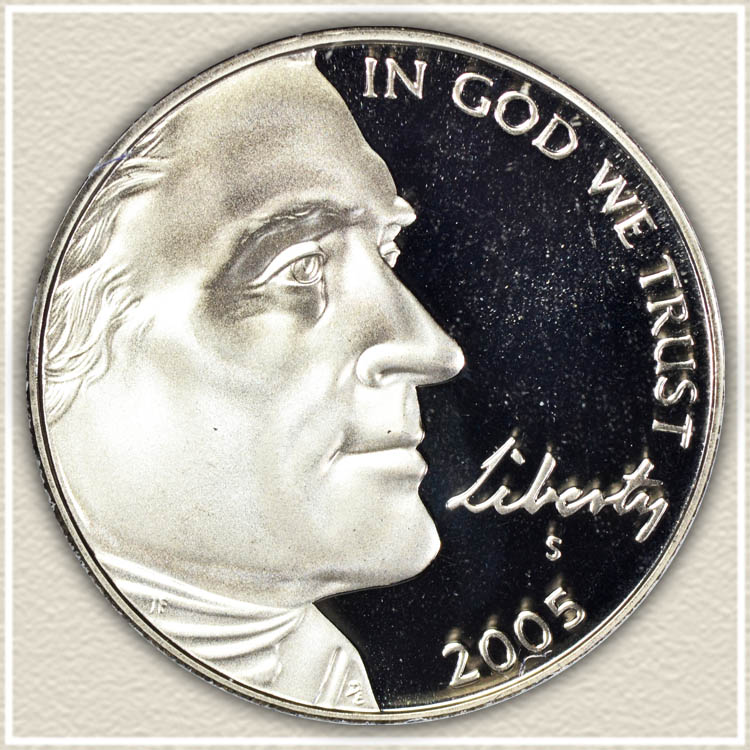 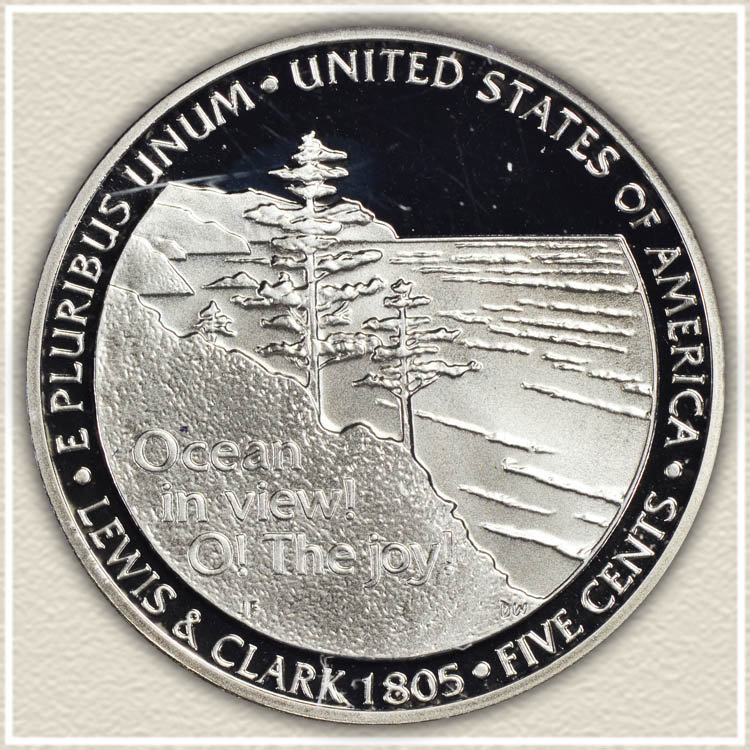 Rendered in great detail, the Pacific shoreline. The design on the reverse of the Ocean in View nickel portrays the Pacific Ocean, hills descending to the sea and the large timber representing the vast forests of the western frontier.

"Ocean in view! O! The joy!" as seen inscribe on the design is a definitive entry in Clark's journal November 1805. The expedition had achieved an important objective of the mission. "Lewis - Clark 1805" along the lower rim marks the 200th anniversary of that day.

As part of the Westward Journey Nickel Series these 2005 designs were minted one-year only. They have become an important part of collecting Jefferson nickels because of their unique status and additionally support 2005 proof set value.

First of Issue Events Adding Value to the 2005 Proof Sets

Collectors of proof coins have an elegant set to consider adding to their collection. A beginning series of the United States Mint American Legacy Collection. Not only are the full 11 coins of the 2005 circulating designs represented, added are two commemorative silver dollars.

Second event is the issue of one year only designs to the Jefferson nickel series. Only minted in 2005 the American Bison and Ocean in View nickels enhance collections.

A large variety of different proof sets are issued by the US Mint. Identify your set using images and descriptions and find its value listed on the chart. Beginning in 1955 proof coins were packaged and sold as sets and began a popular collectible still enjoyed today.

All US coin values. Identify your coins using the image links leading to value charts. Additional points to value are part of the value process: Date | Mintmark | Condition - described and imaged within each series. Surprising value is found in the smallest of detail.