Grading Jefferson Nickels
How to Video

Reviewing the video and images below; differences in condition become easier to judge. Your coins may be worn, however to what degree? Subtle details remaining now determine how much its worth.

In today's market the focus is primarily in the Mint State grade; coins as minted without any wear to the surface. When choosing a coin to add to their collection the uncirculated (mint state) grade is a collector's first choice. Detailed below is the process to judge, identify and separate out these collector quality old nickels.

Continue the process of placing an accurate grade and ultimately an accurate value on your Jefferson nickels. 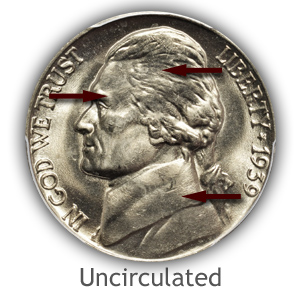 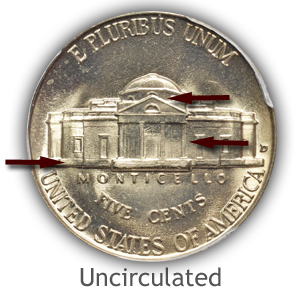 Pictured is an example of a collector grade nickel. Uncirculated condition is confirmed by delicate luster covering the surface completely. No breaks in the luster due to wear are evident. If this coin was ever in circulation the high points would lack the shimmer of the fine grain to the surface. 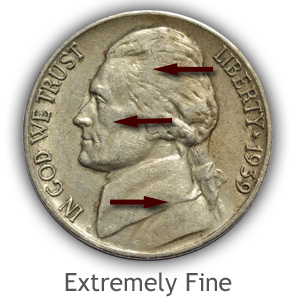 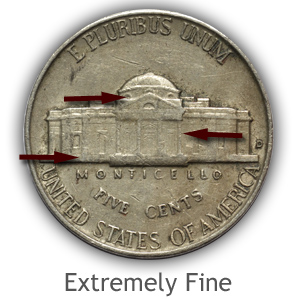 A small amount of wear covers the surface. However the finer details are only slightly worn and remain. 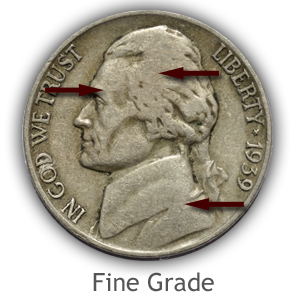 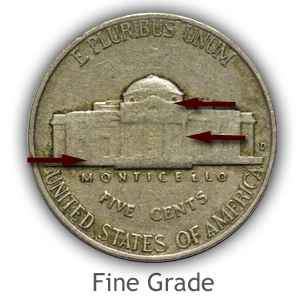 In fine condition wear has removed most of the higher relief detail. Even if just outlines, all major elements of the design remain. 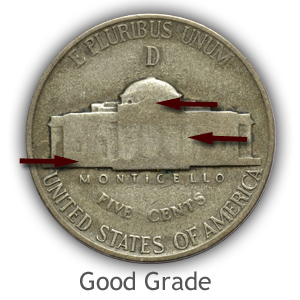 Circulated Jefferson nickels are still in the early stages of collectability. Dates from the thirties and forties show the greatest potential for demand in slightly worn condition. Focus your attention on the Mint State (uncirculated) grade to find today's and future value leaders.

Nickels from the old Liberty nickel to the popular and collectable Buffalo nickel. Video, images and descriptions define what is needed to grade these coins.

Put to use the grading skills to evaluate Jefferson nickel condition. Values by date and grade listed.

Value charts in combination with grading images to judge condition. Discover how much your old coin are worth. Coin series spanning Cents to Gold. Get the best price if selling by knowing the accurate value of your coins.