Grading Mercury Dimes | How to Video

Once a Mercury dime enters circulation and begins to wear, distinct patterns to this wear develop. Major and minor elements of the design fade and eventually merge. These different stages of wear are judged and used to assign a grade. Video | Descriptions | Images identify the indicators to grading Mercury dimes.

First impressions of your coin is an indication of its overall grade. A faded "worn" look signals a dime in the good grade. A coin with visual contours within the face and hair of Liberty suggest the Fine grade. If your dime displays distinctly sharp details overall, especially on the reverse of the coin, it becomes a candidate for the Extremely Fine grade.

Tops on the wants lists of collectors are Mercury dimes in Uncirculated - Mint State grade. These coins retain all original design elements; none of the details show any signs of wear.

Important to recognizing this grade... is judging Mint Luster is present and covers the entire surface. When first minted a luster is imparted to the surface during the striking process. This gives the brilliant shine to the coin, however luster is a delicate texture and susceptible to wear.

The above video demonstrates the vibrancy of luster to the surface. Rotating the coin under a light causes the shine to travel over the coin covering both the highest and lowest part of the surface.

Highest areas of the design are judged first with the intent of detecting any wear. 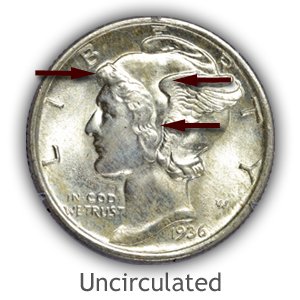 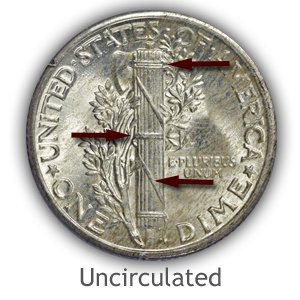 In the Extremely Fine grade a Mercury dime shows evidence of slight wear to the highest points of the design. Mint luster is absent from the majority of the coin often with small areas of luster showing within the lettering and close to the rim. Certain key elements must remain to reach this grade. 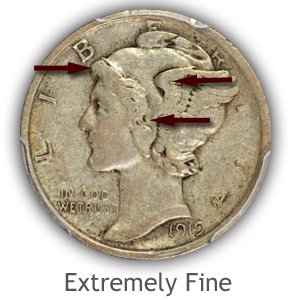 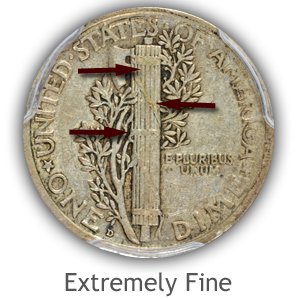 In the Fine grade this dime is clearly worn, both on the obverse and reverse, however not overly so. Major design elements remain strong and ample finer details are visible. The subtle factor separating this Mercury dime from a higher grade is the flatness of once rounded contours. 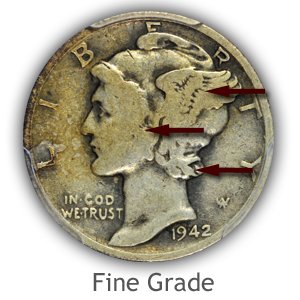 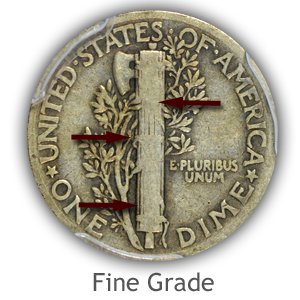 Wear gives a Mercury dime in the good grade the appearance of flatness to the coin covering the entire surface. Liberty does remain well outlined, giving a bold appearance to the center of the coin. Condition of the rim is the defining element to judge in deciding the grade. 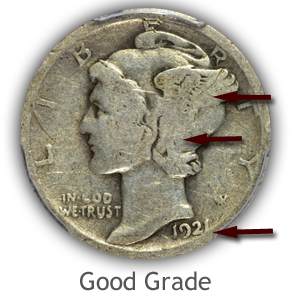 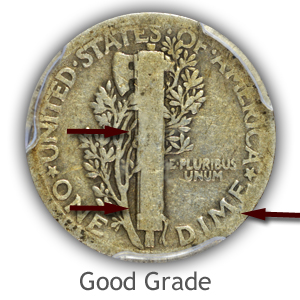 Grading Mercury dime involves not only the technical side, judging the amount of wear to the surface. Also considered is overall eye appeal of the coin, does it project a pleasing appearance or a dull "worn out" look. Wear to the surface does not immediately disqualify the coin from collector status. Pleasing character is found in any grade.

Tied closely with visual appeal are coins within a grade displaying strong features and special characteristics for the grade. 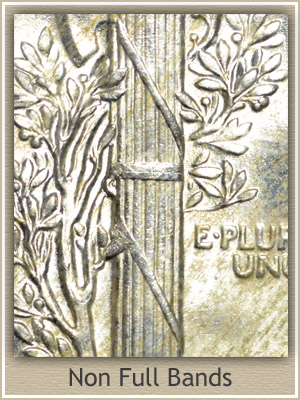 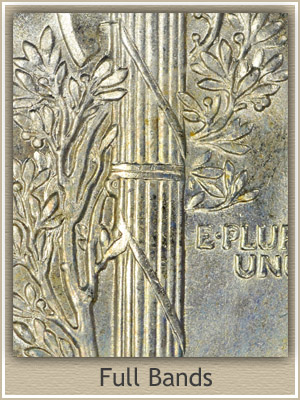 A significant number of Mercury dimes left the mint softly struck. The reverse of the coin displays this softness in the area of the central horizontal bands. A fully struck coin displays two separated bands, each rounded in profile.

It's within the mint state grade this added metric is applied. Circulated - worn coins naturally loose this separation, it is only uncirculated coins receiving the "FB" (full band) notation.

Inspect the bands closely, an unbroken line with complete separation across the entire band is needed. 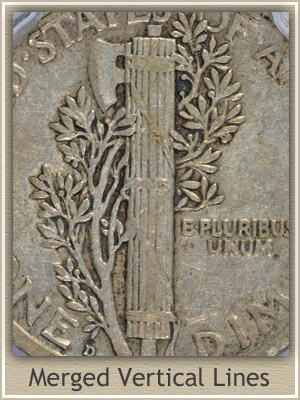 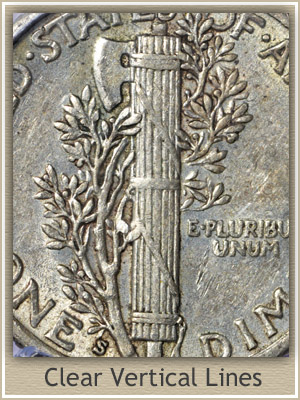 Detecting all vertical lines well defined gives the coin a more complete look and aesthetically appealing. The additional benefit is market acceptance of the grade.

Fading of the vertical lines often occurs in the area just above the diagonal bands. Look closely at both bands, strong defined detail surrounding each is an added appeal to the grade. 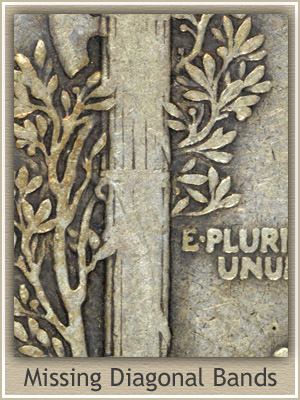 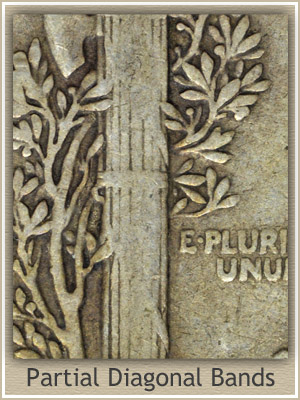 A Fine grade Mercury dime displays wide areas of merging and missing design on the reverse. In the central design, once strongly detailed Horizontal, Vertical and Diagonal lines are faded together. The wearing down of all this detail is what places the coin in the Fine grade.

Expected in the fine grade are missing diagonal lines. Any presence of the diagonal bands, even if faint, improves the appearance of the coin and locks in the grade. It is worth a second look at these moderately worn coins.

Date is Not in Question 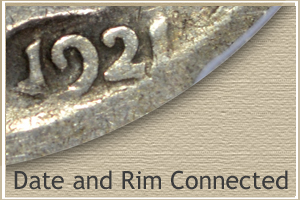 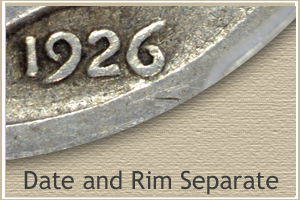 A Mercury dime worn to the point of the Good grade has lost most of the original design. Small detail is missing, many major parts are merged into a flat surface and the rim is fading into the outer parts of the letters.

Finding a special quality to these coins involves the condition of the date and the surrounding area. The date is critical to the value of any coin; it becomes one of the main focal points.

Common to Mercury dimes in Good condition is the last digit of the date partly missing and connected to the rim. Uncertainty of the date is now possible.

The rim connecting with the lettering along the outer edges is what helps define a coin in the Good grade. If the date is spared this condition; separate and bold from the rim it adds character to the coin. A bold date becomes a special quality to recognize. There is no questioning the date and visual appeal is added to a main focal point.

Video index of how to grade coins. The different series of coins ranging from Indian Cents to Morgan Dollars are judged with grading descriptions and images. Accurately determining the grade leads to an accurate value.

Mercury Dime Values | Discover Their Worth

Mercury dimes are very popular with collectors today, grading their condition is one of the keys to accurate value. Visit the value chart listing the different dates and mintmarks within the series and the values for each listed by grade.

All US coin values. Images of the different coin series link to value charts, listing the dates and mintmarks for each series. Step by step; identify both the condition and grade of your coin | locate important mintmarks and popular varieties.