Properly grade Morgan silver dollars by following standards set for the varying degrees of wear found on the coin. Additionally, recognizing the absence of any wear to the surface, indicating a mint state coin, is important to an accurate and higher value.

Grading a Morgan dollar requires both a technical approach and a subjective approach. Technically; viewing the amount of imperfections to the surface such as removal of metal due to wear. And secondly; viewing the coin as a whole and judging its overall appeal; nice even color, no large distracting marks is also part of grading.

Evaluate each coin individually. A visual comparison of your coin to the images and video demonstrates these levels of grade.

Uncirculated Morgan dollars are coins in the same condition as they left the mint. No wear to the surface has occurred. Identifying these coins is a matter is determining if any wear has removed mint luster from the surface. High points of the design are inspected and evidence of luster remaining and no smoothing to the metal confirms the grade. 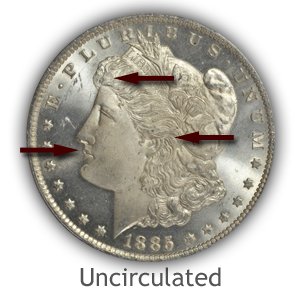 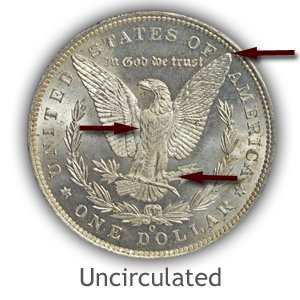 Light wear is beginning to show over the entire surface of a Morgan dollar grading Extremely Fine. Liberty's cheek has lost all evidence of mint frost. Small flat spots now replace the rounded tops of the high areas. Key areas of fine detail do remain and many dates and mints of silver dollars in the Extremely Fine grade are well received by collectors. 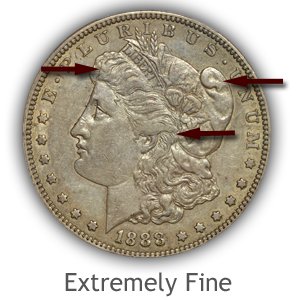 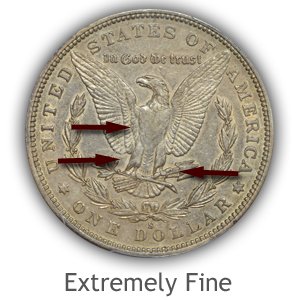 Wear is evident and has cause areas of flatness to the surface of the Fine grade Morgan dollar. However due to the depth of the design elements many details remain strong. The obverse portrait of Liberty is well detailed with a distinct cap and flowing hair. On the reverse a bold eagle remains including the majority of wing detail. 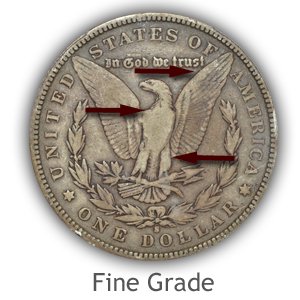 A Morgan dollar in the Good grade may be at the low end of the grading scale; however it does still retain ample detail to have a pleasing character. To many collectors the good grade is equivalent to OK. Heavy with wear true, but not "worn out" describes the coin well. 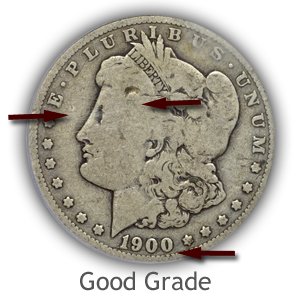 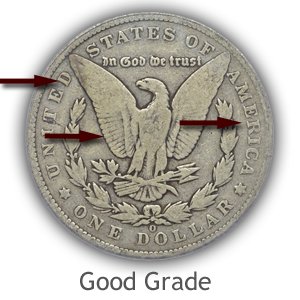 Two approaches to grading help in both an accurate grade and ultimately an accurate value. First is a conservative judgement of the wear and surface preservation of the coin. Knowing what details were initially part of the design and visually seeing them on the current coin is important. As example; Liberty's hairline separating the forehead is critical to determine a Fine grade from the Good grade. Avoid "seeing" a faint hair line and possible optimistic judging of the coin.

Secondly, as a final part of grading, judge the coin from a collectors point of view, as if you were about to spend money on the coin. Using the example of Liberty's hairline; is the line absolutely there thus worth the Fine value.

Recognize and Judge Eye Appeal of Your Morgan Dollar

Aesthetics also forms an important consideration of the worth to a silver dollar. Overall eye appeal is part of the attraction to coin collecting. In any grade your silver dollar has a certain eye appeal.

When first minted, silver dollars are bright white-silver with brilliant luster. As time passes the normal reaction of the metal, if exposed to the elements, is developing a toning. A lightly circulated coin that has lost mint luster naturally develops a soft grey color often mixed with a blue or tan tint. Continued unprotected exposure deepens the grey to a dark charcoal shade sometimes very dark. Visual eye appeal is combined with personals tastes. Deeply toned, dark Morgan dollars may not be favorable to some collectors.

A Closer View of Eye Appeal


Moving into a close-up view of the coin's surface, judge for any distracting marks. Small marks are the norm for coin the size of a silver dollar. However, any marks large enough to catch the eye need critical judgement. 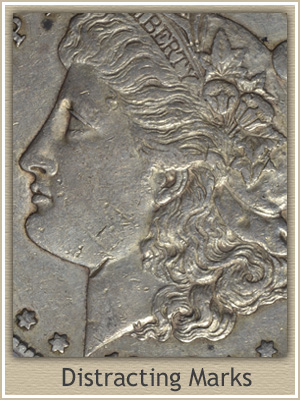 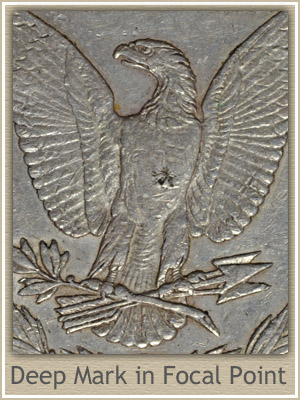 Imaged is the face area of Liberty. Located at the chin and neck line is a sharp, large cut into the surface, part of a grouping of marks. Just above this mark is a smaller, similar mark, both are much larger and deeper than any other abrasions to the area. An accurate description of the coin would include; "nice original color and lightly worn with a grouping of abrasions to the cheek and chin of Liberty".

Imaged is the reverse of the Morgan dollar. With a close-up view of the Eagle; a mark in the center of the breast is evident. In a prime focal point; such a deep and comparatively large mark is noticeable. Judging the value of such a mark has a few subtle variables. If this coin is side by side with another without the mark to the breast area the effect on value is clearer.

Technical grading of Morgan dollars combined with judging the visual appeal of each coin gives a confident insight to value. Handle you coin with care, add nothing to the surface. Additionally, cleaning the coin is never necessary, remove nothing from the surface.

Video index of how to grade coins. Series of coins from Indian and Lincoln cents through the different nickel series, dimes, quarters, half and silver dollars. Each series is studied using grading videos, images and descriptions to judge the condition and assign a grade.

Values of these old coins are listed by Date | Mint Mark | Condition. Different grades of condition are valued separately and appear on the chart.

US coin values. Compare your coin to the image links leading to value charts. Determine the date then mint mark of your coin. Follow the descriptions to judge its condition and find the values listed on the chart.