Inspect and judge the key elements of the surface of the coin, compare to the images, video and descriptions to begin grading Standing Liberty quarters. All of these quarters in Fine grade and above are worth in excess of silver bullion value.

Further study of accurately judging a very worn date on the coin is found below the grading images. Additionally Standing Liberty quarters are known for their often soft striking of the design details. How this impacts the grade is also found below.

Begin the grading process by closely examining your coins. Overall appearance and evidence of sharp crisp details indicates a higher grade. In the Standing Liberty quarter series extra time judging the condition of these coins is necessary.

Key factors deciding on grade are highlighted in the video, descriptions describe the points to consider and the images display locations on the coin to inspect. Starting with the finest condition coin you have is a good method. These high condition coins show the greatest amount of detail, and later, when grading lower condition coins, recognition of the amount of wear becomes evident.

An Uncirculated grade Standing Liberty quarter is one that is in the condition it left the mint. Important to the grade is the surface is free of wear. Mint luster is undisturbed and intact.

Because of the appeal of these coins they are high on want lists of collectors. Identify the absence of wear by inspecting the prominent areas prone to first contact. Using a single light source and rotating the coin while tilting allows the light to bounce off the surface highlighting the grain of the luster. 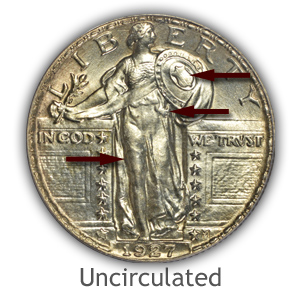 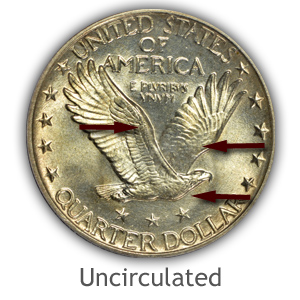 In the Extremely Fine grade evidence of wear is beginning to show on select areas of the surface. Importantly wear is very light, not widespread and the flatness caused is minimal. A Standing Liberty quarter in this grade gives the appearance of crisp and sharp details. Extremely Fine is a true collector grade and many dates and mints are sought as part of collections. 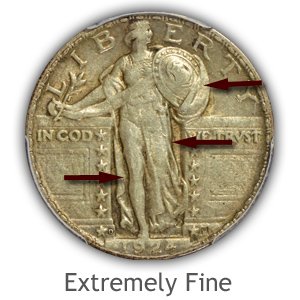 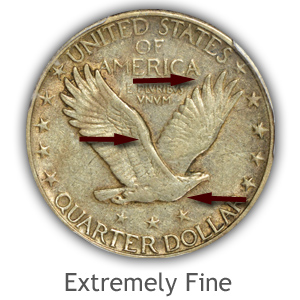 Judging the condition of a well-worn Standing Liberty quarters now must take into consideration the boldness of the date and surrounding area. Coins struck prior to 1925 positioned the date in high profile on the step detail. Causing wear to diminish and fade the date quickly. The problem was resolved from 1925 onward by recessing the date. The rest of the coin is judged the same on both designs. 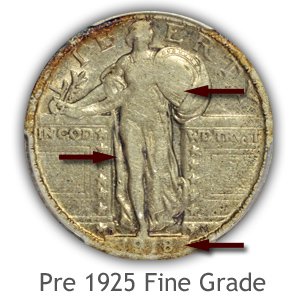 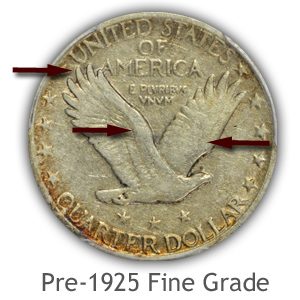 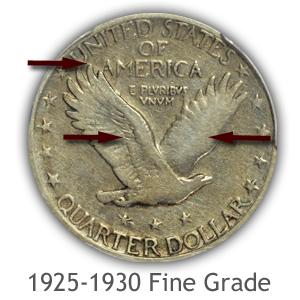 Majority of design detail lost in the Good grade is confined to Liberty herself. Heavy wear has diminished most of the fine lines of the gown and shield. With the lettering complete along the rim these Standing Liberty quarters still display a nice appearance. 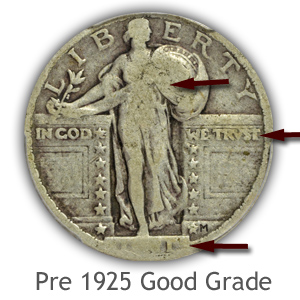 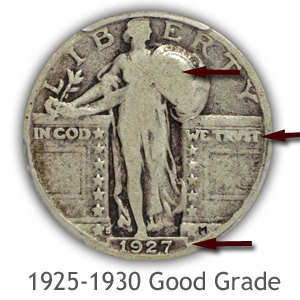 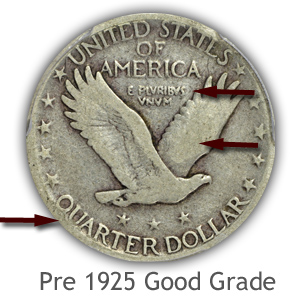 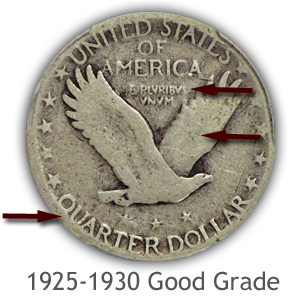 By comparing your coins to the images an accurate judgement of grade is possible. Circulated Standing Liberty quarters display recognizable wear patterns and distinctions from one grade to the next. A study of the key areas confirms the different grades. Every pre 1925 date is worth well above silver content value and every 1925 through 1930 quarter in Extremely Fine grade is very collectible and valued.

A couple of special situations are considered when judging condition of these coins. Firstly, two different designs of the date area were used, and the need to judging the difference. Secondly, there must be consideration given to the often found softly struck coin. 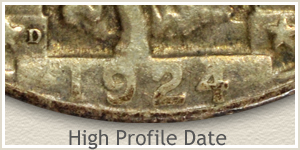 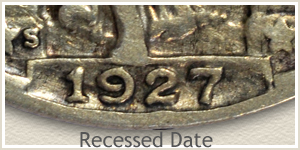 Grading the Date on Pre 1925 Quarters

Placing a value on and grading a worn Standing Liberty quarter starts with the important date area and then moves to the rest of the design. The hope is a coin grading Good or better. Detecting a faded date, one missing clear digits on 1925 through 1930 quarter is an indication of a lower than Good grade coin. However, because of the design used in the date area on pre 1925 coins, finding faded numbers is normal with-in the Good grade.

A flat step was used on the design displaying the date in the early years. With the date bold and high in profile in relation to the rest of the coin, it was first to show signs of wear and faded quickly. In 1925 a solution was reworked into the die and the date was recessed into the step. No longer high in profile and now protected; 1925 through 1930 coins display a clear date in the Good grade. 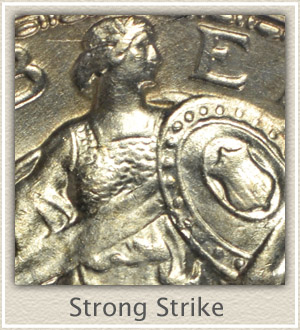 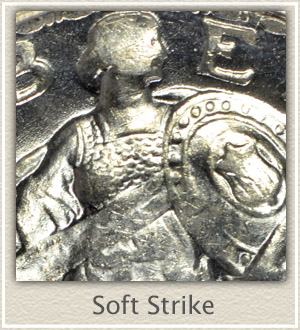 One more important consideration is given to the quality of strike the coin displays. These quarters were often softly struck. Missing detail, when not fully struck, gives the coin a deceptive worn appearance.

Comparing the two coins imaged the main areas to judge are Liberty's head, Liberty's midsection and the edge of the Shield at Liberty's waistline. Complete design detail includes a hair line over Liberty's forehead and leaves above. Liberty's midsection shows bold folds in the gown on a well detailed coin. Additionally a bold shield includes a raised rim on either side of a row of rivets. Notice the missing rivets and raised lines on the softly struck example.

As you grade these quarters adjust for the quality of strike. Mint State coins when well struck are noted in the grade. In the higher circulated grades; Extremely Fine for example, the amount of wear surrounding typical areas of weakness is judged to determine grade. As a coin wears and begins to enter the Fine grade, softness of strike is not considered. In the Fine grade boldly or softly struck coins have worn to the same degree across the surface.

A conservative approach when grading is best.

Video index of how to grade coins. Denominations of US coins series covering cents to dollars are judged and graded using video, descriptions and images. Accurately determining the grade is an important step to finding how much your coins are worth.

Standing Liberty quarters are valued by date | mintmark | and condition. Once finished with the grading process and assigning a grade, value is determined. Standing Liberty chart lists all dates and mints valued by grade.

All US coin values. Compare and identify your coin to the image links leading to value charts. Important points to consider: Date | Mintmark | Condition are described and imaged for each series.