Many rare quarters are grouped in the very early years of minting. Quarters were a large denomination to circulate at the time, mintages were low. 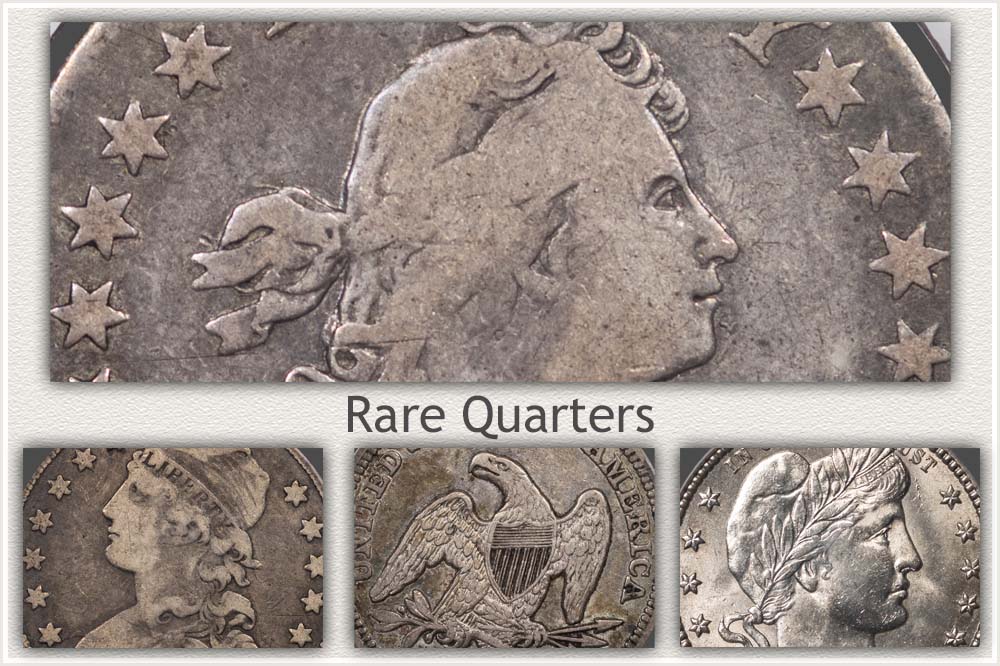 The vast majority of the any quarter dated prior to 1838 is a scarce coin. Heavy wear and/or damage is the condition of the typical old quarter found. In later years branch mints added to production and demand for the quarter denomination was met. Often these branch mint quarters are the scarce to rare issues.

1796 is the first key date U.S. quarter representing the first year of production. Early quarter are all scarce, both because of low mintages and active use.

Total number of early quarters, the Bust and Capped Bust series through 1838 amounted to under 5.5 million struck, all coined by the Philadelphia mint. Interestingly, 1,952,000 quarters were minted in 1835 representing a large percentage of the total number. Every issue began scarce and through use many are now very rarely encountered.

Rare Quarters of the Twentieth Century 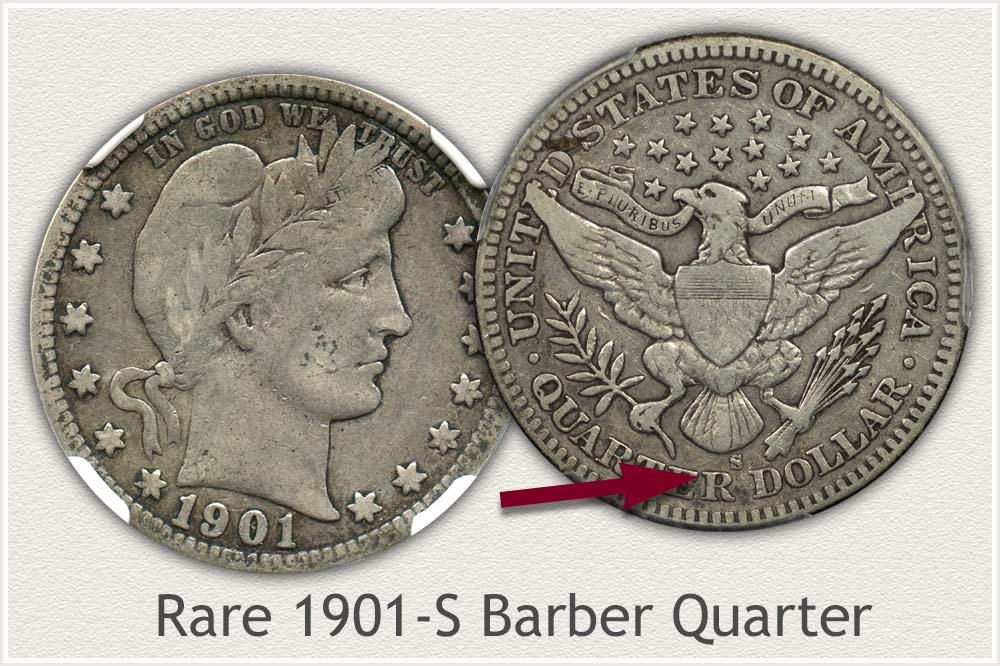 A traditional rare quarter was minted in 1901 when the San Francisco mint struck only 72,644 pieces. Low numbers produced, few saved (high value in all conditions) and demand by collectors are a trait of this twentieth century rarity. 1901-S quarters are worth thousands in any grade. Minted in the first half of 1901, released into circulation and most served the west coast until worn smooth. 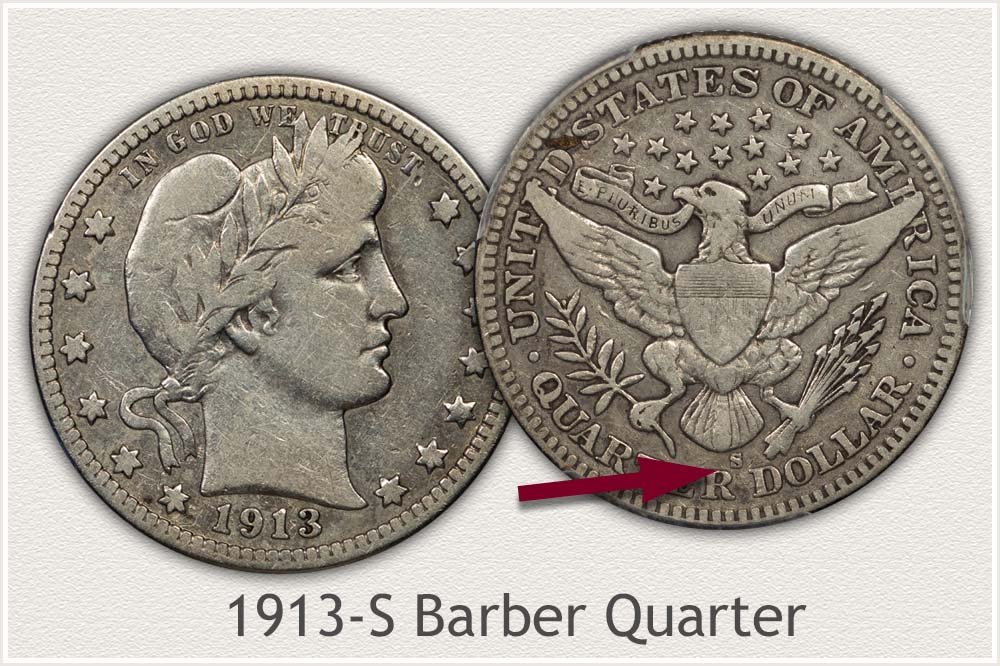 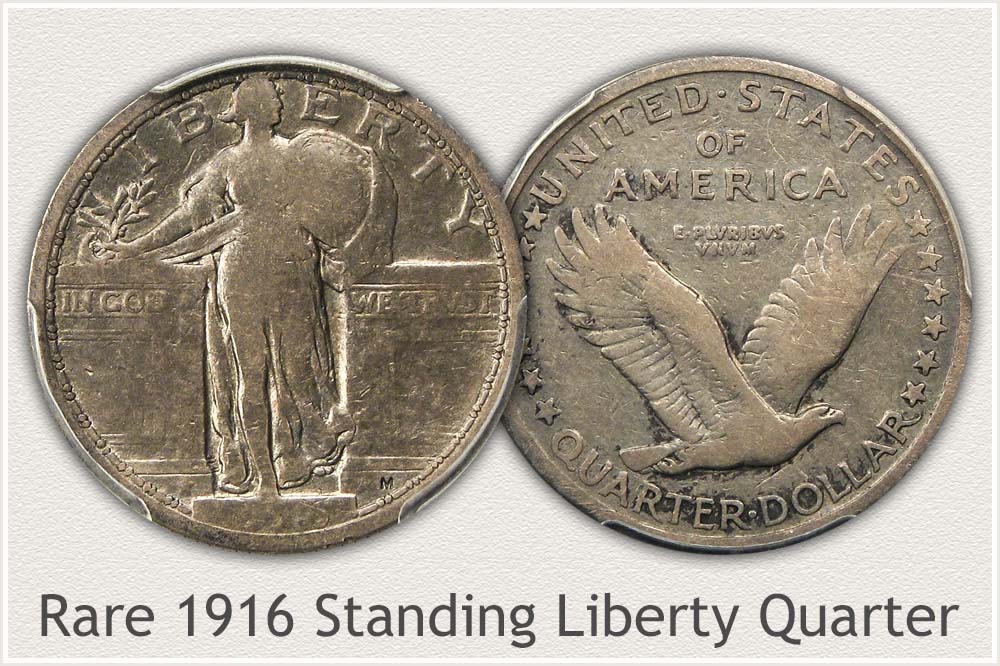 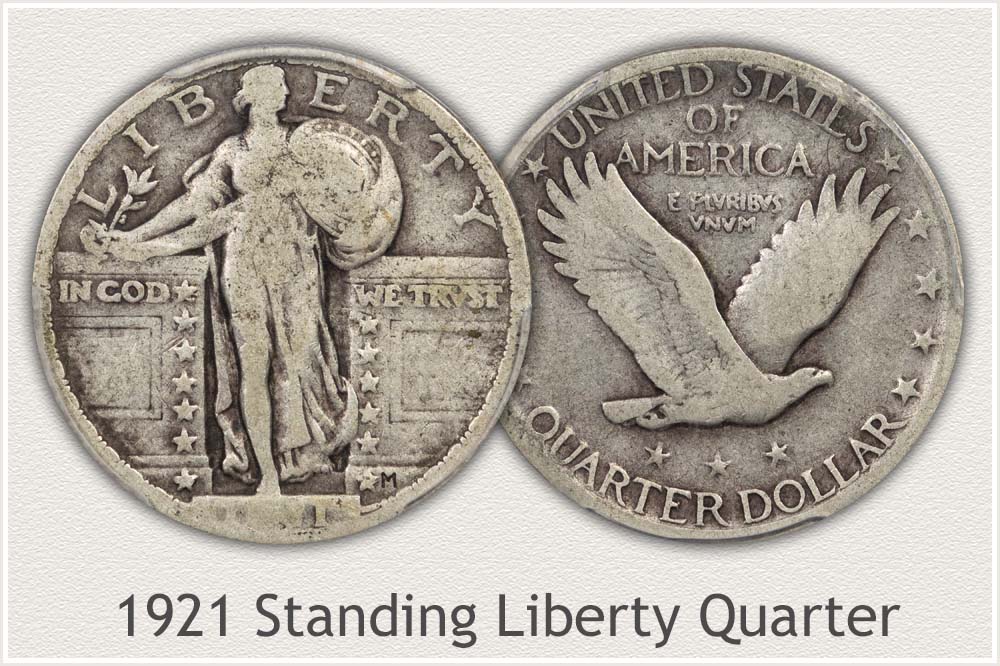 Typical mintages of Standing Liberty quarters from the Philadelphia mint in the 1920's was in the tens of millions of coins. The earlier 1916 and the now the 1921 quarter became the exception to high mintages. With 1,916,000 1921 quarters struck, it started as a scarce coin. Released into circulation, many worn out leaving only a small number surviving today. Even heavily worn examples of the 1921 Philadelphia quarters are sought by collectors as the only 1921 dated quarter. Lightly circulated to mint state condition coins are rarities. 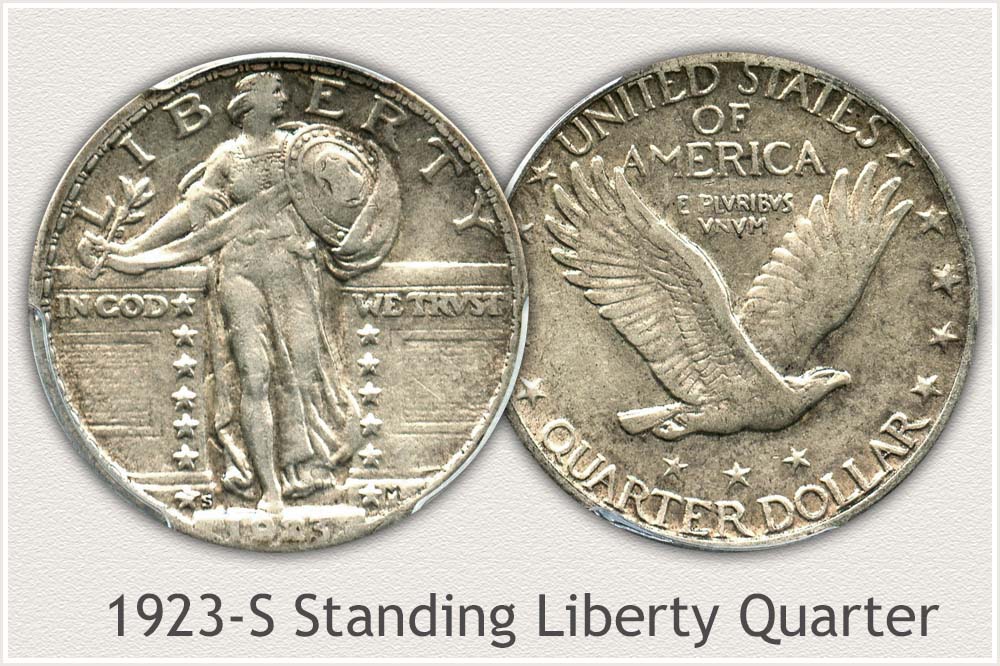 Production of quarters was skipped in 1922. Resumed in 1923, the majority of quarters were minted at the Philadelphia mint. San Francisco the only other mint to strike 1923 quarters did so in a low amount, 1,366,000 in total. These low numbers struck from the branch mint were overshadowed by the multi-millions produced the main mint, Philadelphia. Few of the branch mint coins was saved from wear caused by circulation. The result, mint state examples (no wear to the surface) 1923-S quarters are a key rarity to the Standing Liberty series. 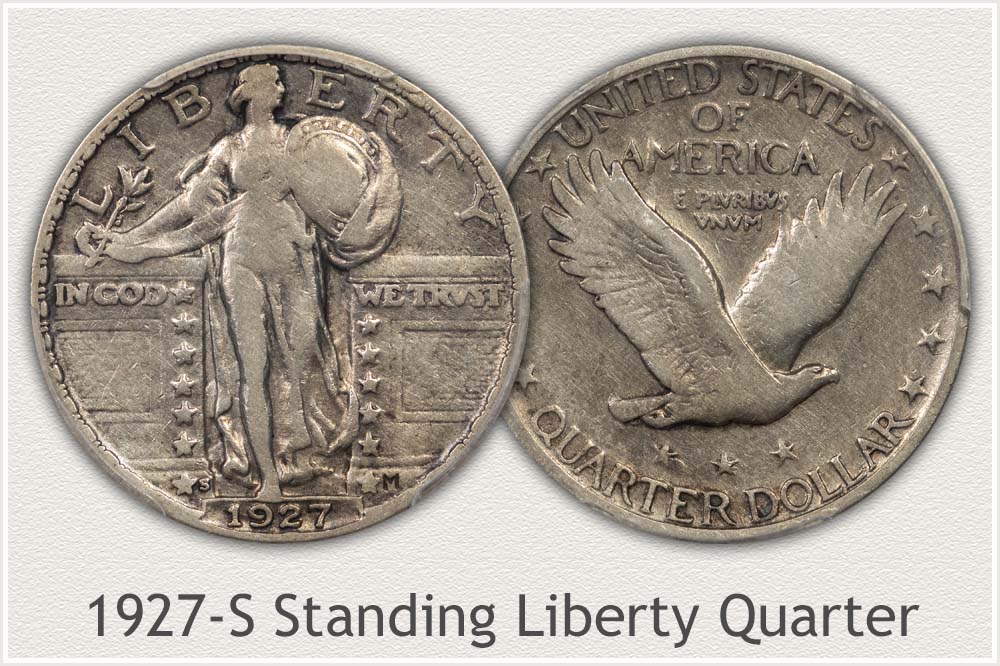 1927 San Francisco quarters are the lowest mintage of the entire series. Just 396,000 struck in 1927 an immediate scarce variety. Collectors typically collect the series including an example of each date and mintmark issued. With few "S" mint 1927's produced they are premium coins in any grade. Low mintage, plus most show wear from circulation, these are a scarce to rare coin depending on condition. 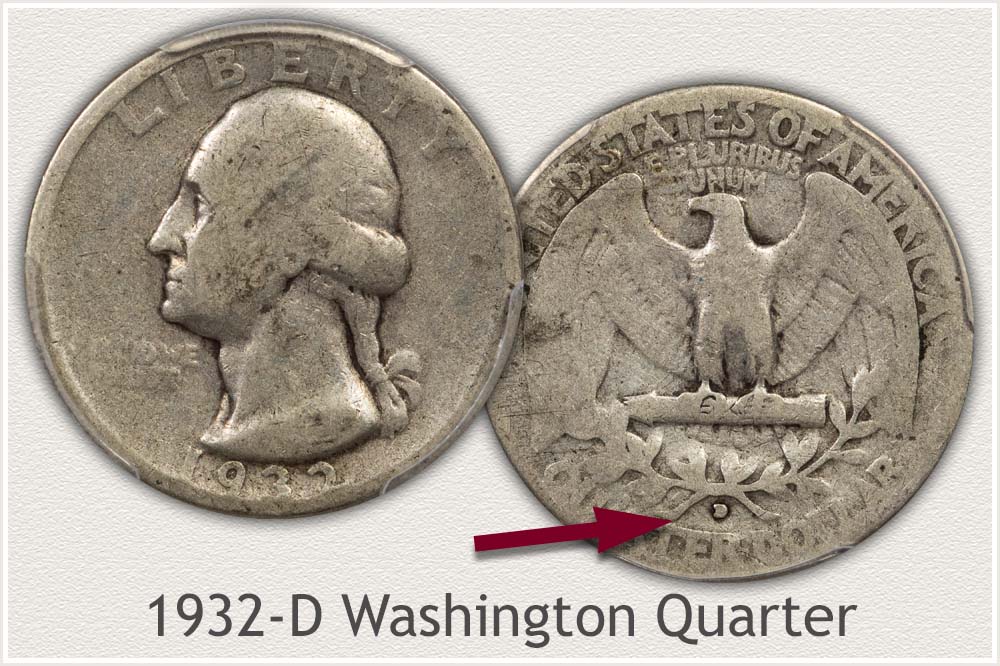 1932 marked the 200th anniversary of George Washington's birth. Celebrated by creating the Washington quarter series. Three mints struck these new coins in 1932, the majority at Philadelphia. Many of the Philadelphia issue were saved and are plentiful today. The key difference is low production numbers struck at the two branch mints; Denver and San Francisco. Denver coined 436.800 and most were used in circulation. 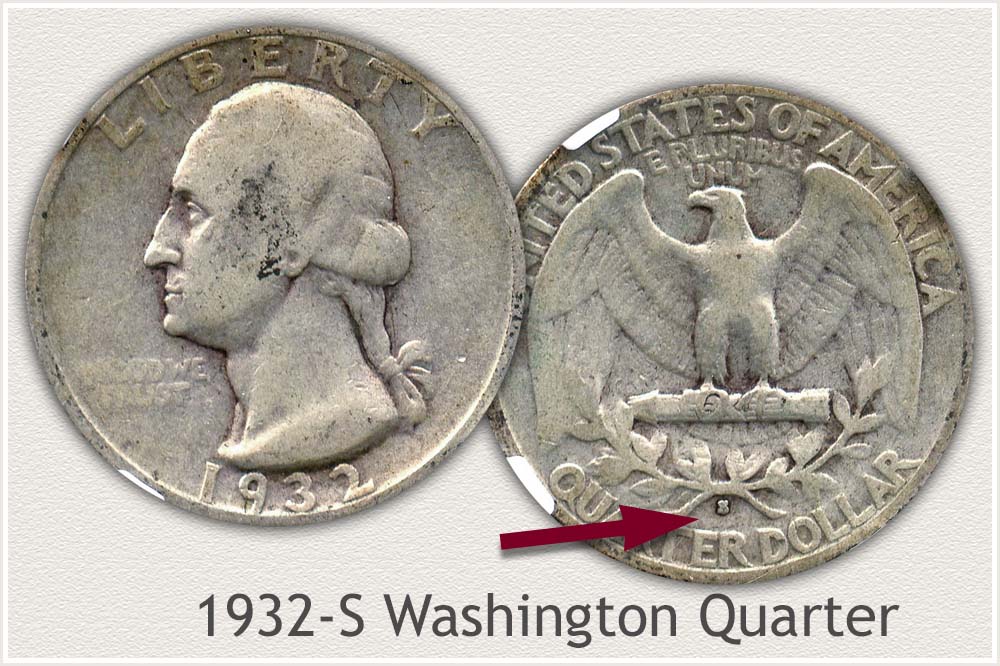 The key date 1932-S Washington quarter is the result of both low mintage numbers and lack of saving examples at the time. The vast majority released into circulation stayed and became heavily worn. These worn coins were retrieved in later years when their scarcity and value was realized. Demand from collectors today support strong value for all condition 1932-S quarters. High state of preservation coins with no wear and few marks to the surface are considered very rare.

Two series of quarters are full of dates and mintmark issues that are premium in value but not necessarily rare. Standing Liberty quarters and Washington quarters are both series with many coins of collectible status and valuable. 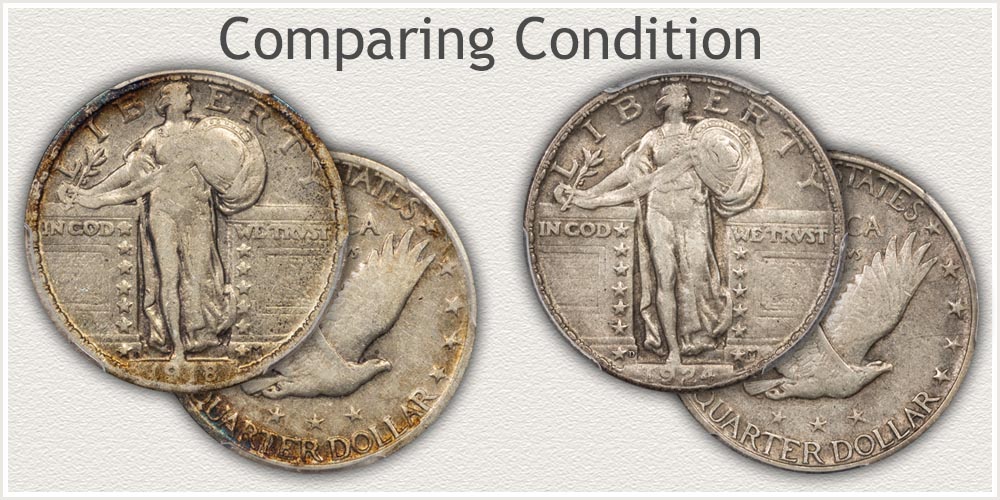 Viewing the images shows one quarter is noticeability nicer in preservation. The higher condition coin displays minor details within Liberty's gown and feather details covering the eagle. Any Standing Liberty in this condition or better is eagerly sought by collectors.

Washington quarters began as a 90% silver alloy metal composition. From 1932 through 1964 all quarters are silver. Beginning with the 1965's a "clad" composition of nickel and copper is the alloy of quarters, no silver. 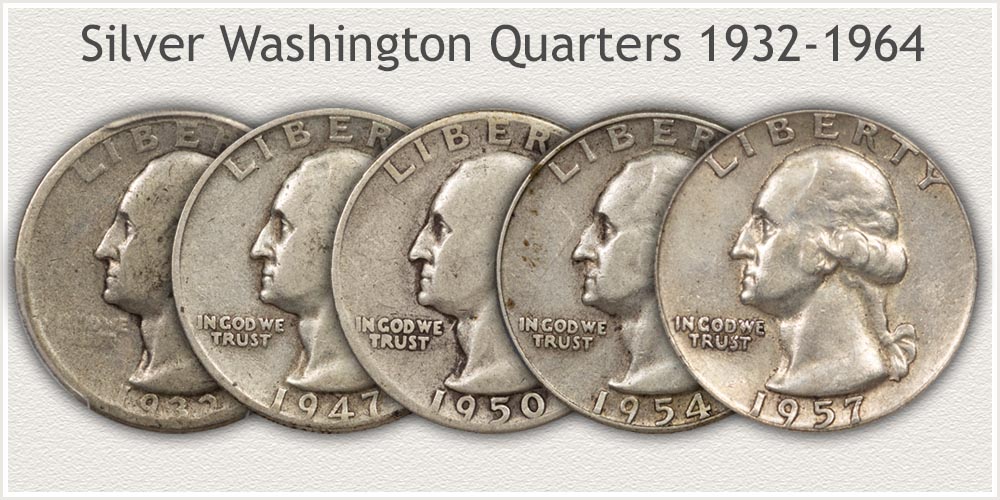 Today's quarters are similar in appearance in color but are not of a precious metal. Inspect closely dates of old Washington quarters. As of 1/30/2023 any pre 1965 quarter is worth $3.97 as a minimum value. A scarce silver quarter with respectable value. Collections of circulated quarters are an excellent and popular entry to coin collecting.

Using a step by step method, find how much your old quarters are worth. From Bust Quarters to Seated Liberty, Barber, Standing Liberty and Washington quarters. All series include Grading Images to judge the condition of your coins and coin value charts.