Grading Barber Half Dollars | How to Video

Coin collecting today has a large and active number of collectors seeking Barber half dollars in all ranges of preservation and condition. Values importantly vary from $13.39 as of 1/30/2023 and can reach into the thousands of dollars depending on grade. Grading Barber half dollars accurately narrows what to expect the potential worth of your coin. Begin with the grading video and continue by comparing your coins with the images.

Overall appearance of a coin is a great indication of its condition and grade. Heavily worn Barber halves project a hazy tired look. Moderate wear and the coin begins to stand out as nice. Light wear and sharp details remaining and the first impression is crisp and appealing. An uncirculated example displaying luster has a "wow" and "valuable" appearance. A comparison of the following images visually demonstrates these levels of grade.

Premium grade of a Barber half dollar is the Mint State - Uncirculated condition. These coins are avidly sought by collectors. Essential to this grade is the absence of wear to the surface. Close inspection to the highest parts of the design is needed to confirm the coin never circulated through commerce.

Use a single light source, tilt and rotate the coin to view the fine details of the surface. Toning may be present however the fine texture of the original luster is necessary to remain. 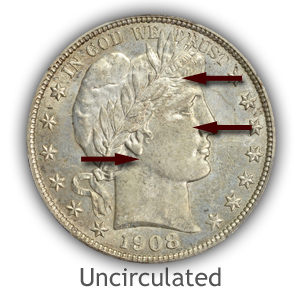 Small amounts of wear is visible on an Extremely Fine grade Barber half dollar. These coins however retain a sharp appearance. Adding to their appeal, original mint luster is often found in the protected areas around the obverse stars and lettering and many parts of the reverse. Attractive and remaining well detailed these coins are popular with collectors often building collections exclusively in this grade.

A few strict guidelines are followed when judging and confirming the extremely fine grade. Importantly, wear must be light with certain key elements of the design remaining. 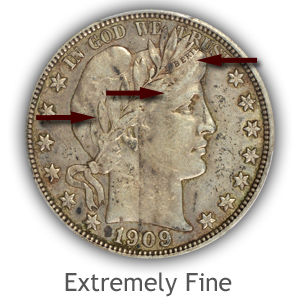 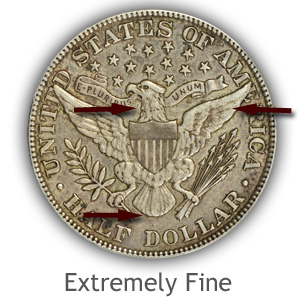 Presented is a Barber half dollar in the Fine grade. There remains enough design detail and appeal to place most Barber halves in this condition solidly in the collector category. Moderate, even wear is displayed and without any distracting marks the design is still well displayed. The major requirement to the Fine grade is inspecting the headband searching for the letters of Liberty. Judge also the design elements on the rest of the coin to confirm only moderate wear is present and the Fine grade is accurate. 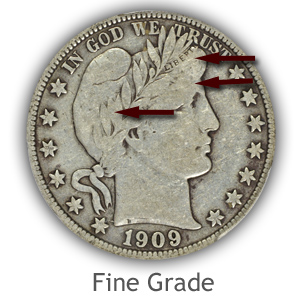 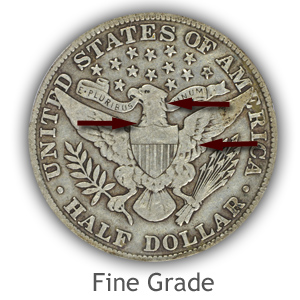 Heavy wear characterizes the Good grade of a Barber half dollar. Visually bold are the portrait, lettering and date. The majority of both the fine and major details have worn to a smooth, flat outline. Visual appeal in this grade has a big impact on value. As a coin wears to the extent of losing most detail it runs the risk of projecting a hazy washed out appearance. Solid for the grade examples need to retain a certain degree of boldness. 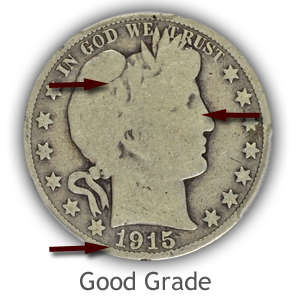 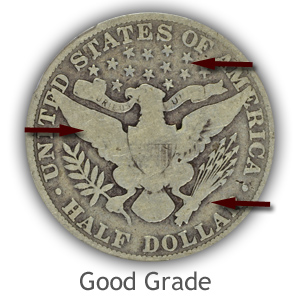 Reaching an accurate grade is a combination close inspection of the surface. Recognizing and judging the presences of key markers that determine the separate grades. All viewed in a conservative way.

A possibility faced when grading a coin is the distinct difference in preservation and look of the obverse compared with the reverse. One grades higher than the other. A Barber half dollar can display these characteristics; the reverse rim for example, is fading into the lettering when the obverse rim is still bold and separated. 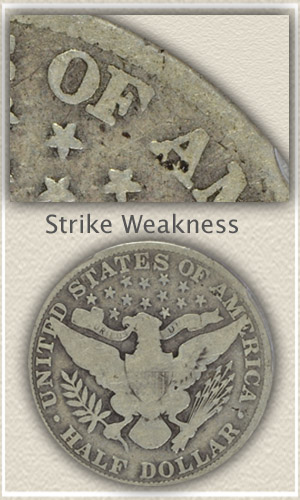 Grade differences; obverse to reverse, defaults to the lower condition side to determine the overall grade of the coin.

Barber half dollars often display striking differences in boldness from obverse to reverse. The headband on the obverse is a high profile area and is subject to an incomplete strike. As a softly struck obverse coin wears, the lettering of Liberty fades sooner than a bolder struck coin. A softly struck reverse on the Barber half shows itself early as the coin wears in the right upper part of the horizontal lines of the shield. Often these lines fade quickly.

As a Barber half wears to the point of the Good grade the rim begins to show its original striking weakness. A coin on one side can have a full bold rim fully separated from any design elements and the reverse rim is all but gone showing areas of merging with the design.

A conservative grade takes into consideration both sides of the coin and finds an equal medium. Accurate grading results in accurate market value; a value both buyer and seller can agree.

The image identifies the weakness of the rim on the reverse of this Good grade Barber half dollar. Judged as minor, the rim is faded but does not merge with the lettering. It demonstrates the coin was soft in strike in the area. The good news, there is no real impact on condition and value.

Visit the in-depth half dollar grading videos. Detailed descriptions of the grading elements involved, combined with images highlighted with specific areas of the coin. Half dollars are valued according to series, date and mintmark with the additional importance of grade.

Video index of how to grade coins. Series of different denominations are judged with grading descriptions and images. Accurately determining the grade leads to accurate value.

Barber Half Dollar Values | Discover Their Worth

After the grading process assigns a grade, a value is determined. Barber half dollar value chart lists all dates and mints.

★Coin Values Discovery pulls together... Grading Barber Half Dollars and...

All US coin values. Compare you coin to the image links leading to value charts. Important point to consider Date | Mintmark | Condition are described and imaged for each series. Surprising value is found in the smallest detail.