Grading Walking Liberty Half Dollars
How to Video

You can accurately judge condition yourself by following the How to Video - Grading Walking Liberty Half Dollars. Grading is a necessary step in discovering the true value of your old half dollars.

Even today silver value currently $23.65 per ounce is the underlining driver to how much many of these old half dollars are worth. As of 1/30/2023 each Walking half is a minimum of $8.54 a nice start.

Along with the date and mint of your coin - grading the condition has the potential to identify a higher collector quality and value. Take your time; there are a few subtle points that take some comparison to recognize. Soon you become comfortable in how to grade old coins yourself.

Grading Walking Liberty half dollars is a process of comparison, judging the condition of your half dollar and assigning a "grade." Assessing the amount of wear - if any - to the surface of the coin determines each grading category. 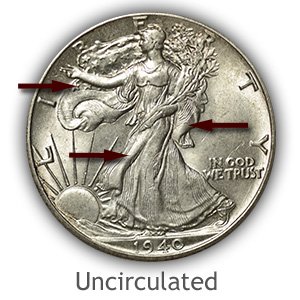 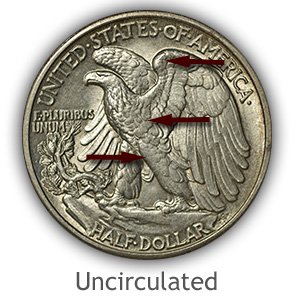 An "uncirculated" Walking Liberty half is still covered with its original and delicate mint luster. It is the new coin shine. Confirm your coin is this top collector condition by slowly rotating it under a single light source. Bands of luster would remain complete extending from rim to rim. No breaks accrue in the luster in the areas of Liberty's arms and no removal of luster down the center of Liberty. 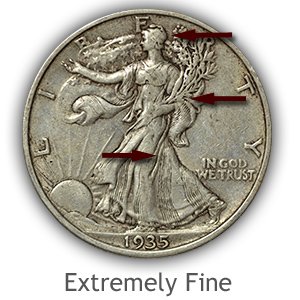 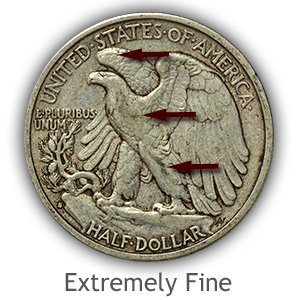 In "extremely fine" grade many Walking Liberty half dollars are considered collectible quality, especially the earlier dates. One of the first areas to check to consider your coin is a candidate for this grade is a noticeable separation of Liberty's hair from her forehead. True the highest areas of her head show a minor flattening but the loss of detail is minimal. Look for the details of the design listed below to remain. 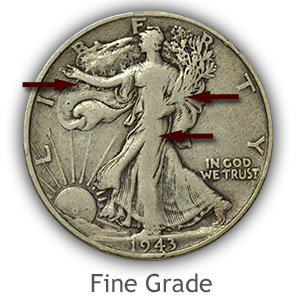 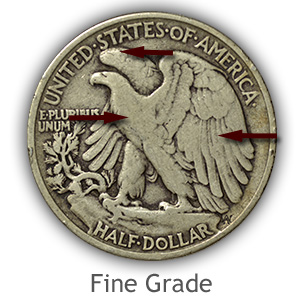 Next to judge is a moderately worn example. Despite noticeable wear the "fine" grade remains popular with today's collectors. Many old Walking Liberty dates and mints in this condition are awarded a premium value. A quick check is to confirm the stars above her arm remain, some flattening is acceptable but if the stars are visible your coin is a candidate for the fine grade. 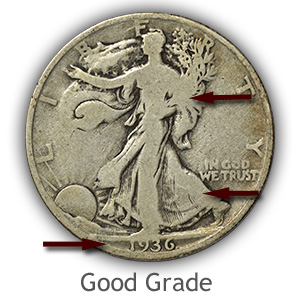 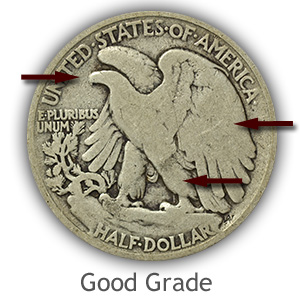 Years of service has removed a large amount of metal on this coin. It is now judged and graded as "Good" condition. The date, although visible is merging with the design both above and below. The branches have flattened with Liberty's arm and she is now mostly an outline. Hold your coin at a steep angle and extensive flat areas are noticeable.

Consider grading Walking Liberty half dollars carefully. Even despite heavy wear the Walking Liberty design holds up well and is still pleasing. Many early dates in the "good" grade are attractive to collectors and eagerly sought. Judge conservatively and you get closer to an accurate value.

Visit the in-depth half dollar grading videos, combined with enlarged images and detailed descriptions. Dates and mintmarks on the coins are only part of half dollar value. Follow the steps to grading condition and it leads to how much your coins are worth, accurately.

It's true most of the circulated Walking Liberty half dollar value is directly tied to silver. However, there is a small but growing number of rare dates and mints in certain grades worth a rising premium. All the dates of issue are listed in the value charts in the different grades. Discover how much your silver halves are worth.

It is an excellent index with images and text links to all coin series, from Cents to Gold. Value charts, grading images and descriptions uncovers the common to rare coin values found in your box of old coins.