Many of your old US silver coin values are tied closely to the price of silver. Calculate their current worth.

The calculator gives the value of the silver contained in the coins. It shows all silver; dimes, quarters, half dollars and silver dollars are worth many times their face value today. These "bullion quality" coins are heavy with 90% silver and valued accordingly.

Noted on the calculator are two surprising coins; silver nickels and the 40% silver half dollars. These are also sought and traded in the market based on the price of silver, however less well known.

Each denomination and series have its unique group of coins to recognize as containing silver. Important to identify are dates and condition that routinely trade at the minimum silver value. Collector dates and quality are further identified and separated because of higher potential.

The dime denomination was silver through 1964. The majority of coins trading today based on silver value are found in the Mercury and Roosevelt series. 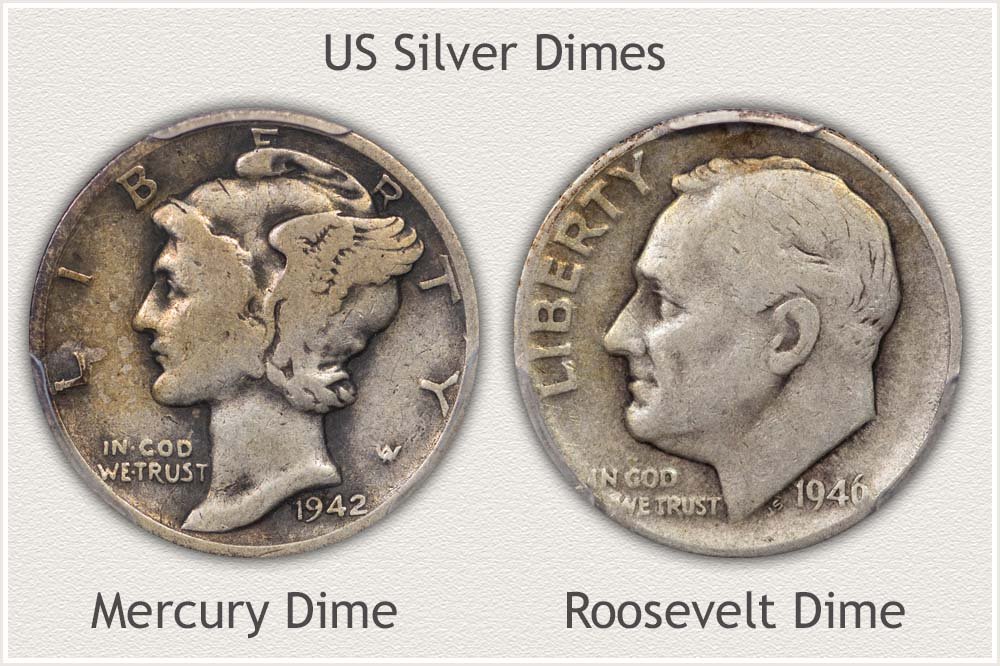 The dime denomination was silver through 1964. The majority of coins trading today based on silver value are found in the Mercury and Roosevelt series.

The older Mercury dimes are all quickly becoming collectible coins with values in excess of metal content. First minted in 1916 and continuing until 1945 with the majority prior to 1940 worth judging individually for higher values.

Dimes dated 1940 to 1945 in circulated, worn condition, are the coins routinely traded and priced based on silver value.

Mercury Dime Values lists dates and mintmarks for each with a section on judging condition, so you can separate collectible quality from the minimum silver coin values.

Roosevelt dimes contained silver through the year 1964. Silver years are 1946 to 1964. Vast quantities were minted. Most silver Roosevelt dimes in worn condition trade based on silver. You can safely price most worn examples by their silver coin values.

Roosevelt Dime Values highlight a few collectible dates, and some, because of condition are worth a premium.

Washington quarters, the current series, was first minted as a 90% silver piece. Years 1932 through 1964 are the silver coins. 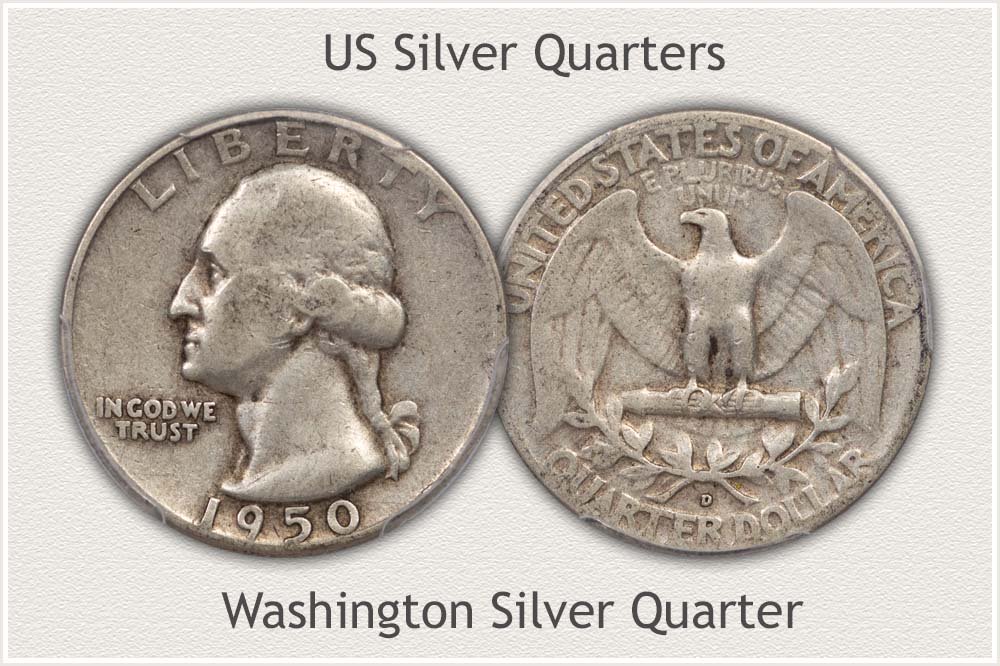 During the years of the silver variety quantities were minted and most circulated becoming worn. Those that trade at bullion level prices are these worn examples. Few are collected in less than Mint State condition.

Years 1932 to the early 1940's are showing premiums in high grade worn examples. Any Washington quarter from the early silver years is beginning to gain collector potential. 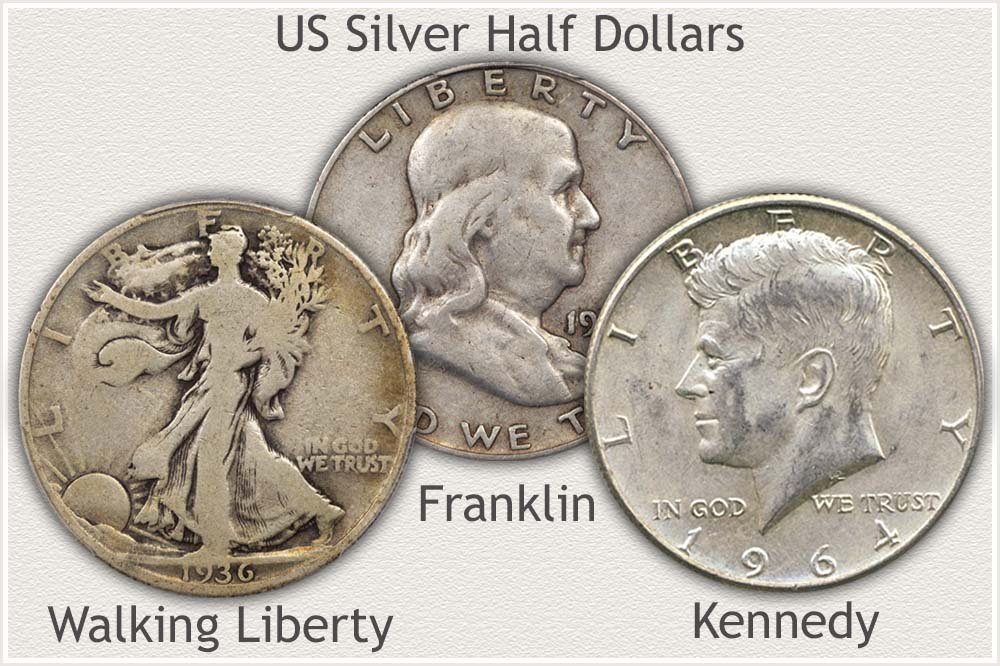 The older Walking Liberty design contains a only a small select group still priced at minimum bullion silver lever. First minted in 1916 the series continued through 1947. The majority of the early years are well above minimum silver value. Later years, the 1930's onward, condition plays a role in separating bullion quality. Heavily worn Walking Liberty haves dated 1930 to 1947 is the group considered bullion.

Walking Liberty Half Dollar Value lists each date and how to determine condition. Because of potential value, examine each half dollar individually to assure a correct value range.

Franklin half dollars are all 90% silver. Minted 1948 to 1963 the majority of circulated -worn examples are valued as bullion pieces. There is however a following of collectors assembling sets in circulated condition, an affordable set of silver coins. A few dates are attracting a premium. Most coins valued above silver are in Mint State grades.

Franklin Half Dollar Value is a complete listing of dates, mints, and images to help judge condition.

1964 is the 90% silver Kennedy half dollar released into circulation. Large quantities were produced and the majority trade at bullion value. All circulated - worn examples are bullion quality. 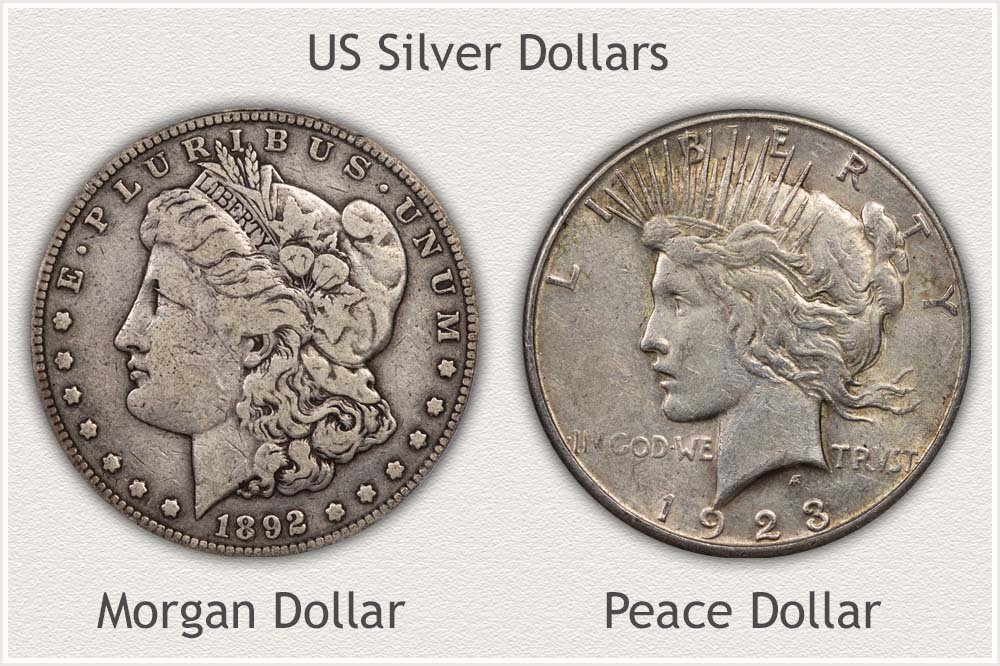 Use the base silver value as only a starting point in valuation. Each of these old dollars require an individual examination and judgement by date, mintmark, and importantly condition. Both series has its share of coins considered bullion quality but many from each series is well into collector value range.

Morgan Silver Dollar Values guides you through all the different years and mints having an impact on price. The condition of your coins is covered in detail with images to judge where on the value chart to accurately find value.

Peace Dollar Values is specific to this series of US coins. Most circulated common date Peace dollars are valued tied to silver content. Within the series however are certain dates and primarily condition that easily leads to finding a coin worth far above metal value.

Silver was used as part of the alloy in nickels during the years 1942 through 1945. 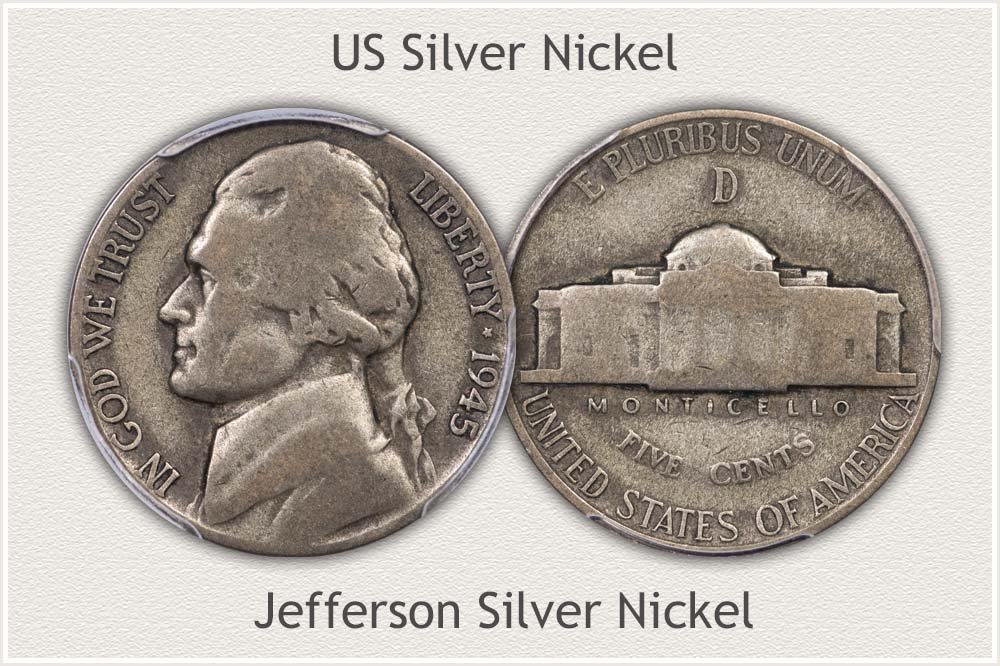 Nickel was needed for the efforts of WWII and silver was substituted in the production of nickel coinage. 35% by weight is pure silver in these coins. With such a high amount of precious metal, all have become valuable.

A silver nickel is easily identified by the large "P" "D" or "S" mintmark found on the reverse above the dome of Monticello. Note: 1942 saw both regular and silver alloy coins minted. The silver variety is confirmed by the large mintmarks; "P" or "S" above Monticello on the reverse. Imaged is the quality trading at silver value.

Jefferson Nickel Values covers the values of the higher condition silver nickels and how to judge the condition of your coins. 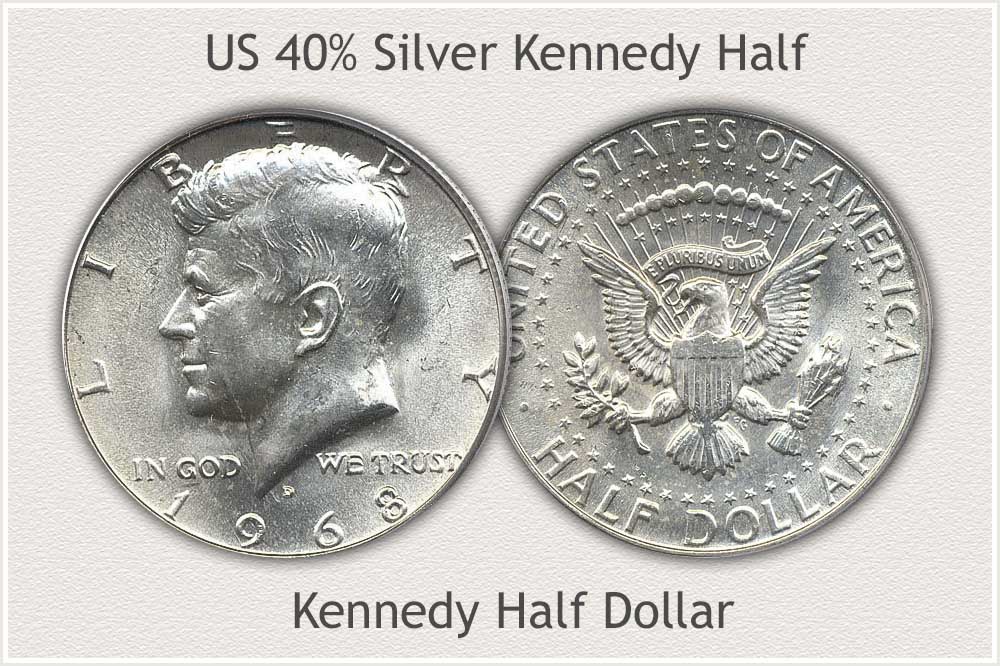 Because of the precious metal in these half dollars, all are worth well above face value. Minted in ample quantities, those in circulated - worn condition are traded at the bullion silver value.

The Forgotten Silver Kennedy Half Dollars is an in-depth look at these seldom remembered and valuable silver coins.

The silver coin market is dynamic and changes depending on silver moving either up or down and pace of movement.

Keeping this in mind, using the base silver value of a coin is a solid start to valuation.

Older silver coins are valued well above silver value. The following images help identify your coins and are links to the series. Value charts and grading sections narrow how much the coins are worth.

Silver coin values apply to many series of US coins. In certain series; Washington quarters, Roosevelt dimes, silver price is used to value many of the coins. With other series; Mercury dimes, Walking Liberty halves, careful study of each coin is necessary to avoid undervaluing.

As a rule, any US silver coin minted prior to 1940 should be judged individually. And coins earlier than 1916 are becoming highly collectible, the majority are priced above silver coin values.