Released into circulation in the mid 1960's; silver Kennedy half dollars represent the end of an era in circulating silver U.S. coins. 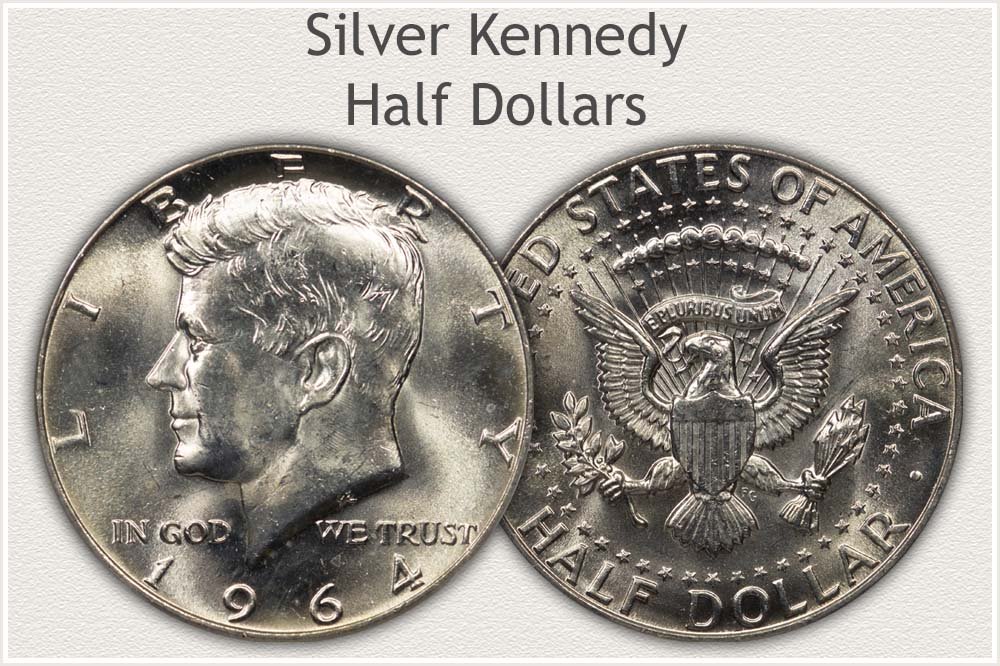 At the beginning of the Kennedy half dollar series, silver was part of the alloy in the coins. This little fact about the series is somewhat forgotten. Early years of Kennedy half dollars released into circulation were silver. These silver half dollars circulated along-side later non-silver clad coinage and how to identify the difference represents a significant difference in current value.

1964 the Special Silver Kennedy Half Dollar

In 1964 the new silver Kennedy half dollar was introduced and contained a hefty 90% silver content. Minted as a memorial of the passing of President Kennedy. First coins struck, February 11, 1964 and public distribution began March 24, 1964.

Over 430 million 1964 Kennedy halves were produced, a huge number at the time. Vast quantities were saved. Partly as remembrance of President Kennedy and partly as storing silver.

1964 is the only year of 90% silver Kennedy halves, something special worth looking for in a group of old coins. 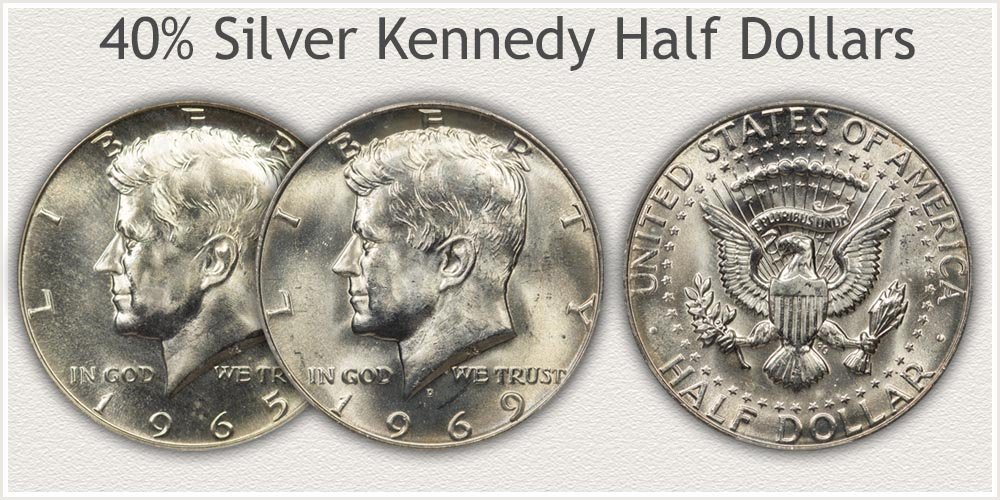 Following the first year saw a change in metal composition. In the years 1965 through 1970 a 40% silver Kennedy half dollar was minted for circulation.

Over the years over 841 million 40% silver half dollars were struck. A very large quantity produced and sent into commerce.

Huge amounts of these 40% halves remain today. Many are mixed with the non-silver clad coins of later years. Anyone not realizing the value of the silver halves is an occasion for the coin to slip back into circulation by spending or exchanging them for cash at the bank.

A close inspection of older halves is needed to find the premium value silver issues.

The Silver Plus Opportunity 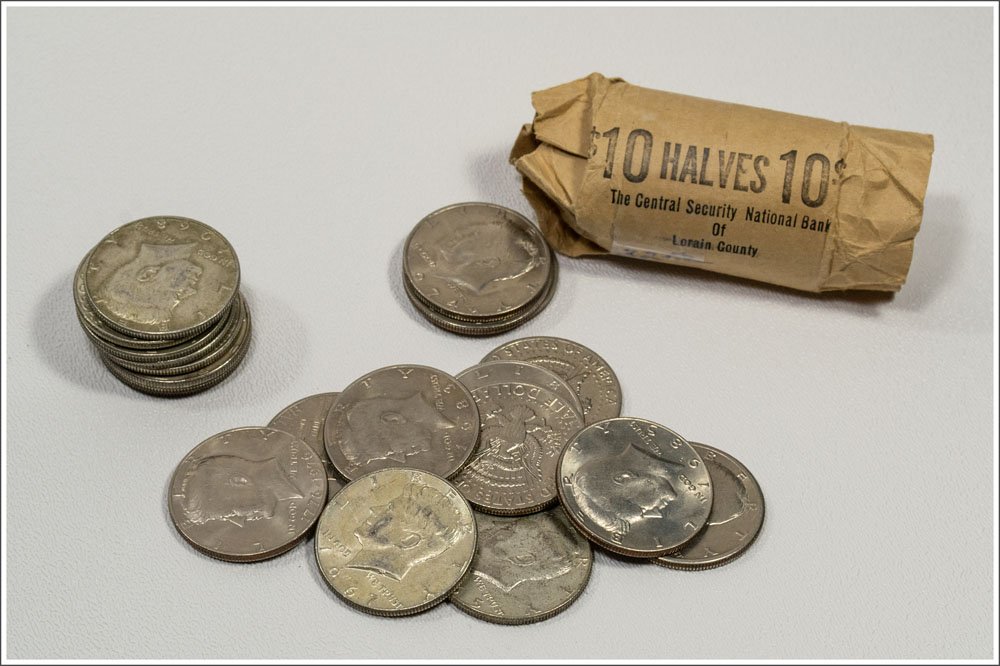 With premium values already in place there remains an additional opportunity. Collector quality half dollars are in demand. High condition is the separation between silver value and added collector appeal and value.

The values quoted above is the value of silver in the coin. Dealers and collectors refer to this as the bullion value. Silver Kennedy half dollars are worth more than bullion value to collectors if, and this is the important part... the coin is "Mint State". A coin best described as one in brand new condition, with no signs of wear.

Most silver halves you find, unfortunately, will have slight wear, evident on the high points of the design. However, I am sure many were saved each year as they were minted, so there is always a chance of finding a coin in Mint State condition. And if the coin is outstanding in appearance, there is the possibility of higher value. 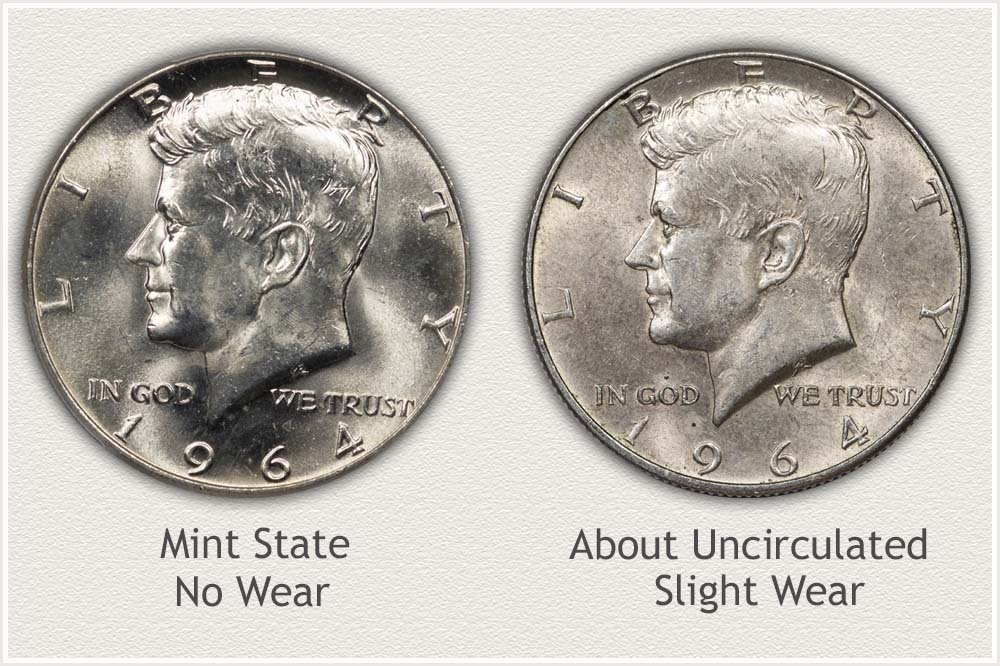 Examine your coins and compare them to the image. Look for evidence of wear on the high points of the design, most notable on the cheek of Kennedy and the shield on the reverse.

Mint State: Notable of the condition is no-wear is evident to the surface of the coin. Holding by the edges, tilt to a light source, notice if the shine of luster is complete across the entire surface. Luster is delicate and if missing indicates the coin circulated and became slightly worn.

Slight Wear: Removing a silver Kennedy half from collectible status is wear to the surface. Many were minted, large quantities were saved, however, only coins without wear are considered collectible. All others are valued based on silver content.

Inspect Kennedy's cheek. Any wear results in removal of the fine luster giving the coin its shine. If a dull color is present it is an indication of wear. Often the fields of the coin are dull also, lacking the shimmer of undisturbed luster. Compare the two coins of the image and then your coin to find a match.

These silver Kennedy half dollars are not forgotten by collectors and are premium because of silver.

Many of your old US silver coin values are tied closely to the price of silver. Pre 1965 silver dimes, quarters, half dollars and silver dollars are all heavy with 90% silver and worth many times their face value. With today's high value of silver; $23.65 per ounce as of 1/30/2023 your old half dollars are becoming surprisingly valuable.

Follow the steps to sell silver coins. Determine value first; then how to find a dealer. Images and descriptions help recognize the dates and series of U.S. coins minted in silver.

Searching for rare half dollars starts with the year 1965. Any half dollar minted before 1965 is silver and premium value. Twentieth century series have a large number of scarce dates and a few very rare issues. Halves minted in the early years are all scarce.

Do you have other coin denominations?

All old U.S. coin values. It is an excellent index with images and text links to all coin series, from Cents to Gold. Value charts, grading images and descriptions uncover how much your box of old coins is worth.