Higher 1867 Indian head penny value is found in better preserved examples. The condition of your coin is key to value. 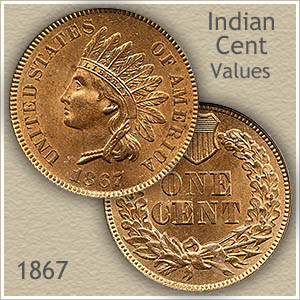 Today's demand from collectors and dealers exceeds the small supply of better quality, well preserved 1867 pennies. Vast numbers of these coins have been lost to time and heavy use. As listed on the chart its high minimum value indicates all are scarce.

The rarest of pennies and seldom encountered are coins that never entered circulation. As a result these like new pieces are avidly collected and at the highest end of 1867 Indian head penny value. Pictured is one of the few in this elite condition and worth well over $210 to a serious collector assembling a top quality collection.

As part of the popular Indian Head penny series your coin, in any condition, is sought by many collectors and dealers.

Large variations in value are found in small amounts of wear. Close examination of your 1867 penny may find a $50 difference in value.

Pictured are close up views of two coins, the one on the top was pulled from circulation at an earlier stage and received less wear than the bottom penny. Now putting yourself in the position of a collector, perusing and obtaining the nicer coin would naturally enhance your entire set of Indian pennies. It is this added demand for higher quality that is easily followed by higher prices.

Surviving numbers of heavily worn pennies is far greater than those with the majority of the finer details remaining. With the supply of nice coins rather small in a popular series such as these Indian pennies, care taken in judging condition can lead to your 1867 Indian head penny value increasing by $50 or more.

Your Penny Value is Conditional

Judging the condition of your 1867 penny leads to its accurate value, perhaps higher value. The various stages of wear to a coin are defined by a "grade" represented with the following images and descriptions. 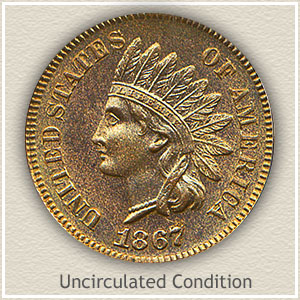 Uncirculated: Rare is an 1867 penny in "uncirculated" condition. It is a coin that has never circulated and there is no wear to its surfaces. To confirm your coin is in this condition examine the very ends of the feathers, if wear is present it smoothes the normal "grain" and flow lines of the metal. Her cheek and extending to include the chin is another area prone to early wear. Again a worn surface shows smoothing to the metal, a distinctly different look compared to the surrounding area. 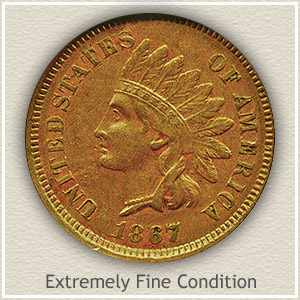 Extremely Fine: Sharply defined details, including the minor elements, defines an Indian penny in "extremely fine" condition. Looking closely at the head band the letters in Liberty are fully separated from the defining lines of the band. Wear is present, however all parts are bold. Your coin should stand out as very pleasing to the eye and highly detailed. 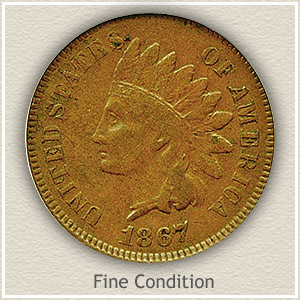 Fine: As a coin begins to show moderate wear its grade is termed "fine." Feathers once finely detailed are now smooth at the ends and worn in the centers. Hair curls are no longer rounded in appearance with parts blending into the headband. Below the ear and behind her neck the headdress ribbon and hair is lacking detail and separation.

Good: 1867 pennies in "good" condition are collectible and worth a nice premium. Although worn to almost an outline, her portrait still shows slight detail. The lettering and date along the rim is clearly visible but in shallow profile. If your coin has avoided any serious dents and nicks and is not any worse than just described, it is considered solid for the grade.

$1 to 2 dollars for common dates. With many advanced collectors pursuing Indian pennies the rare dates along with your 1867 Indian head penny value are moving higher. As always better condition coins are especially sought. Today your box of old coins has never been more valuable

Penny values are determined by using the grading images to judge condition then checking the date and values on the charts covering each series of US pennies. Discover all the rare varieties, dates and mintmarks.

Follow the steps above and increase your ability to realize higher value if selling and finding coin buyers.