1877 Indian head penny value is the highest of all Indian pennies. Considered the key to the series, value and demand is greater for an 1877 than any other Indian penny. 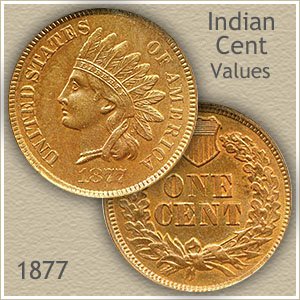 Worth $360 and up even when heavily worn, it is a popular date with collectors. Many are assembling sets of Indian pennies and finding a nice 1877 with the least amount of wear is a challenge. Should your coin display some of the finer details in and around the headband it is avidly sought by collectors.

Amazingly, a few rare 1877 Indian pennies are still in the same condition today as when first minted. Referred to as "uncirculated" these coins with mint luster remaining, and undisturbed surfaces are the top prize of any collection. To the right is a rare gem uncirculated 1877 Indian head penny, value is $3,000 to $3,200.

Auction results are strong when a rare 1877 Indian penny is offered. Prices paid for these rare coins are regularly determined by multiple bidders. Pictured are two examples of 1877 pennies selling at auction highlighting today's demand. The left image is a moderately worn coin, with a pleasing light brown coloring. The right coin is a stunning gem condition example.

Both of these coins drew collector attention and received many bids. The eye catching bright gem quality coin reached $8912 in value. The lightly worn 1877, similar in appearance to most others in a box of old coins was bid to $1696. Auction settings bring great coins together with serious collectors, creating true market values.

It's not an unrealistic expectation with accurate grading applied to your 1877 penny, it realizing a higher value. Consider having a professional grading service evaluate any rare date penny.

Large swings in 1877 Indian head penny value often hinge on small subtle details of the coin's surface. In the collecting market, grading a coin is understandably subjective with many personal views. Often an independent third party is called upon to render its opinion. As an important resource to the hobby, dealers and collectors routinely send high value coins to either PCGS or NGC for authentication and grading. 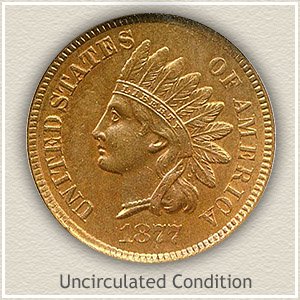 Uncirculated: Total absence of wear is required to reach the lofty "uncirculated' grade. Original mint luster is still visible over the entire coin. By tilting an uncirculated penny side to side, unbroken luster rotates across the surface. Also, inspect the high points of the design for evidence of wear. A dulling and smoothness of the surface on her eyebrow, cheek and the ends of the feathers is an indication of slight wear. Heavier wear is noticeable by flattening of normally curved contours. 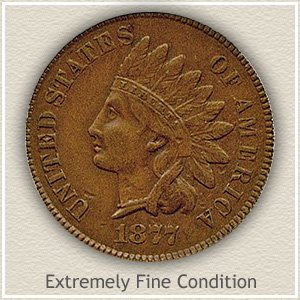 Extremely Fine: An 1877 Indian penny in "extremely fine" condition displays all major and minor design details. Your coin's overall appearance is distinct and sharp. Light wear has begun to remove the roundness of the hair curls behind her neck. In the center of the ribbon over these curls portions of the diamonds are fading. Hair above her eye and along the lower headband is showing light but distinct wear. Overall a visually pleasing coin, with no distracting faults. 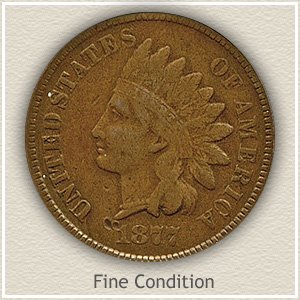 Fine: Highest parts of the design, cheek, neckline and headband are visibly worn, and somewhat flat. However, all major details remain clear, indicating an Indian penny in "fine" condition. Roundness of her cheek and chin has worn away. Along the back of her neck most fine details separating the hair curls are blended into one. Giving your coin definition the central area of the headdress is well defined with the headband and feathers separated. Overall a bold, moderately worn image remains. 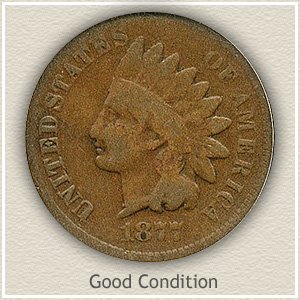 Good: Heavy wear has reduced the portrait to almost a flat silhouette. The headband and hair above the eye are no longer separated, hair curls along her neck and ribbon are merged. Despite its worn appearance, 1877 Indian head penny value remains above $500. Still a very popular and sought after coin.

A very popular coin, everyone understands and has heard of the value of an Indian Head penny. Common dates are now worth more than one dollar each. Many collectors are building collections and putting a heavy demand on not only your 1877 penny but also all dates and avidly seeking better condition coins. Compare your coins to the values chart.

Easily sort and value your coins. An important step in preparing for selling and finding coin buyers.