1924 quarter value is found by recognizing the mint variety of the year. Three mints struck Standing Liberty quarters in 1923. Scarcity and demand are reflected in a wide range of values.

A step-by-step process is used to identify the important elements to how much these old quarters are worth.

Reviewing the chart above, it is noted special attention is given to the mint variety and also just as important, condition of the coin. Using the same method as collectors, inspect and judge your coin.

Varieties of 1924 Quarters to Recognize

Small mintmarks used by the branch mints identify each. Confirming both the date and mint variety finds its place on the chart. 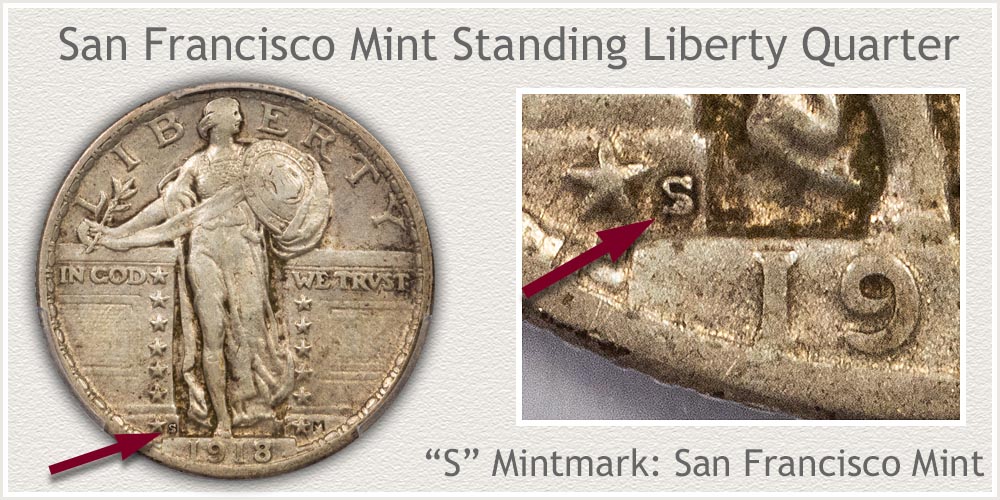 Quarters were actively used in commerce in the 1920's. San Francisco's production of just under 3 million pieces supplied the west coast and most remained in circulation becoming very worn and withdrawn from use.

All branch mints use a mintmark to identify production. San Francisco's "S" mark is found to the left of the date. On the wall, a small "S" letter indicates San Francisco struck the coin. 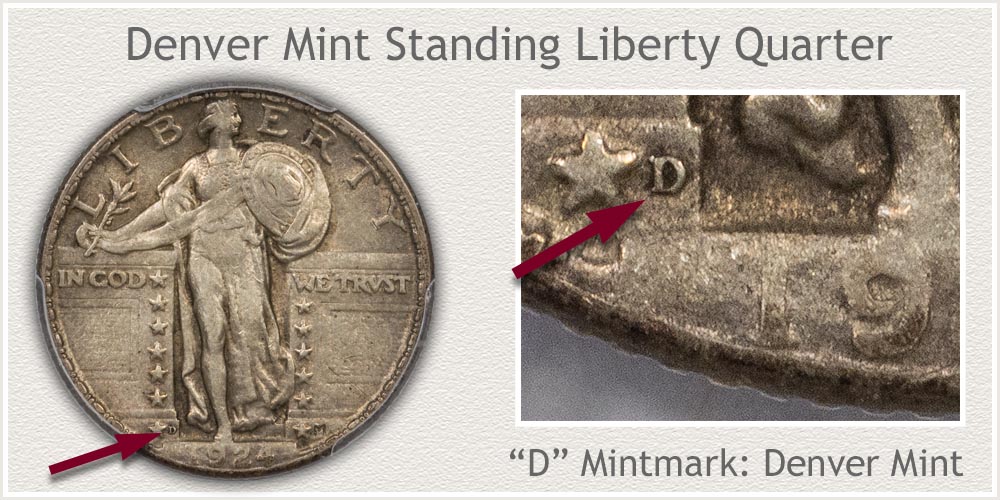 The Denver mint supplied 3,112,000 Standing Liberty quarters to the central U.S. in 1924. As noted by the premiums on the value chart, few were saved at the time. Most were worn to the point of an unrecognizable date. With a readable date these are a quarter worth well above silver content.

Denver placed a "D" mintmark on all of its production. Looking to the left of the date, on the wall a "D" identifies the coin as the Denver variety.

No Mintmark on Obverse: Philadelphia Mint Struck the Coin 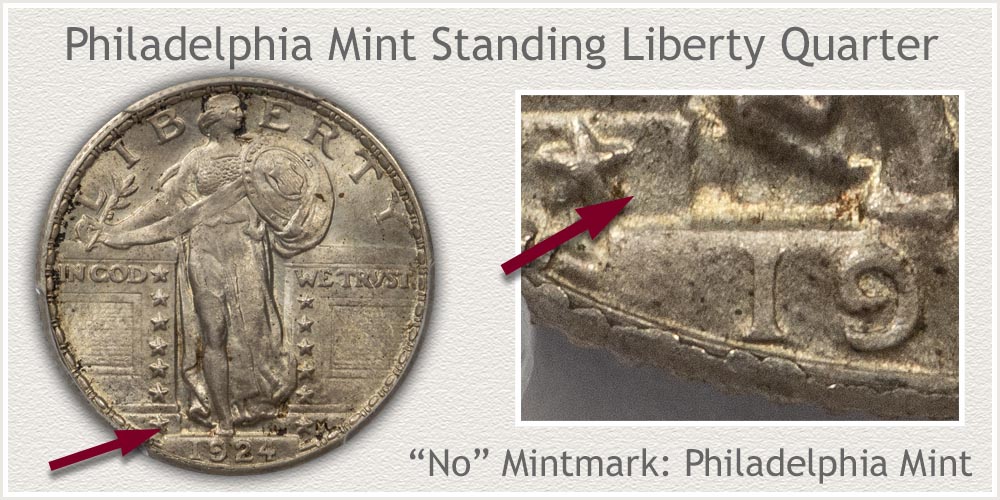 Philadelphia 1924 quarters are the available variety when comparted to the branch mint issues of the year. The challenge to collectors is finding pleasing, lightly worn or better examples. Confirm date and mint variety then inspect closely for the nicer condition examples.

No mintmark was used by the Philadelphia mint. To the left of the date, the space between the lowest star and date is empty on Philadelphia quarters.

As a coin circulates different parts of the design begin to wear. Patterns of flat spots and areas of wear are used to gage loss of metal and features to the coin. Specific points are inspected and compared to standard for the grades.

Examine the image of a mint state coin, one with compete design and luster as minted to help recognize loss of details when a coin becomes worn. 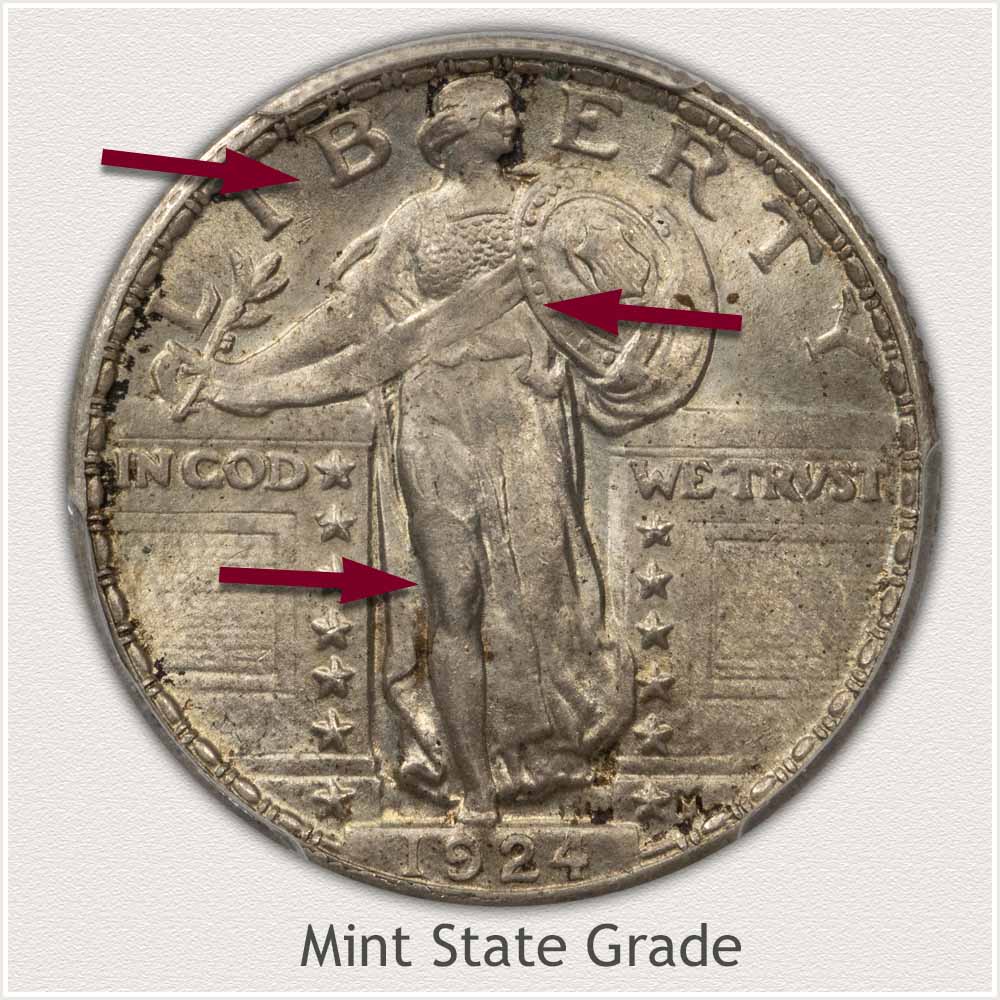 Mint State: A coin when first minted exhibits luster, the effect of a fine texture to the metal. Luster is delicate and used as a first indicator to wear on a coin. The absence of wear defines the Mint State grade.

The entire surface of the coin is inspected for the presence of luster. High relief contours remain similar in texture to low protected areas on quarters without wear.

Starting at Liberty's right knee confirm luster and shine are without dulling and smoothness, continuing over the length of her leg.

Another high area prone to first wear is the scarf extending from the shield across Liberty. Upper and lower edges of the scarf are without any smooth areas and the metal is similar along its length. 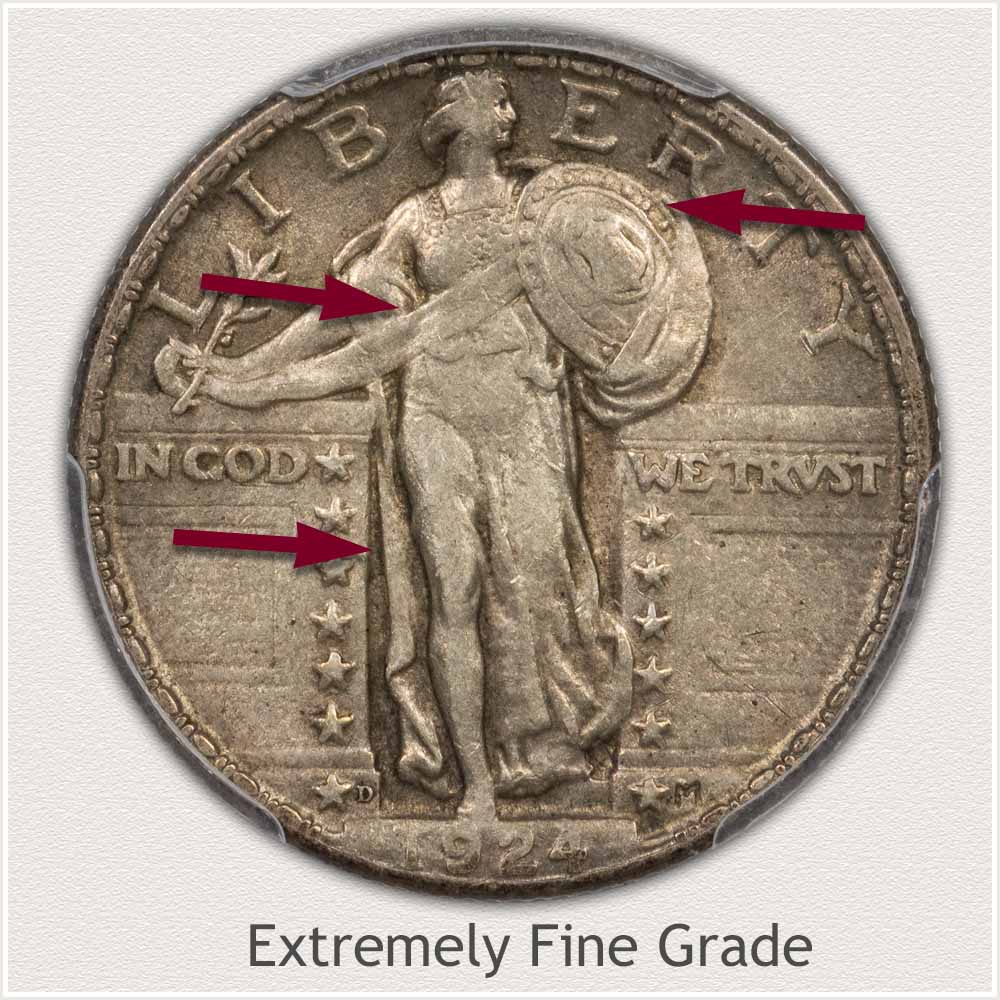 Extremely Fine: Light wear seen as small flat areas on tops of contours is placing the example in Extremely Fine grade. Fine details remain and only minor flatness is seen. Luster is missing from the majority of the surface.

Liberty's right leg shows the greatest amount of wear. Her knee is worn smooth and is connecting with the thigh. Wear is limited to just the tops of the contour over the shin to the foot.

A smoothing to the scarf and losing its luster is evident. Both top and bottom edges to the scarf are complete across Liberty's mid-section on a coin in Extremely Fine grade. 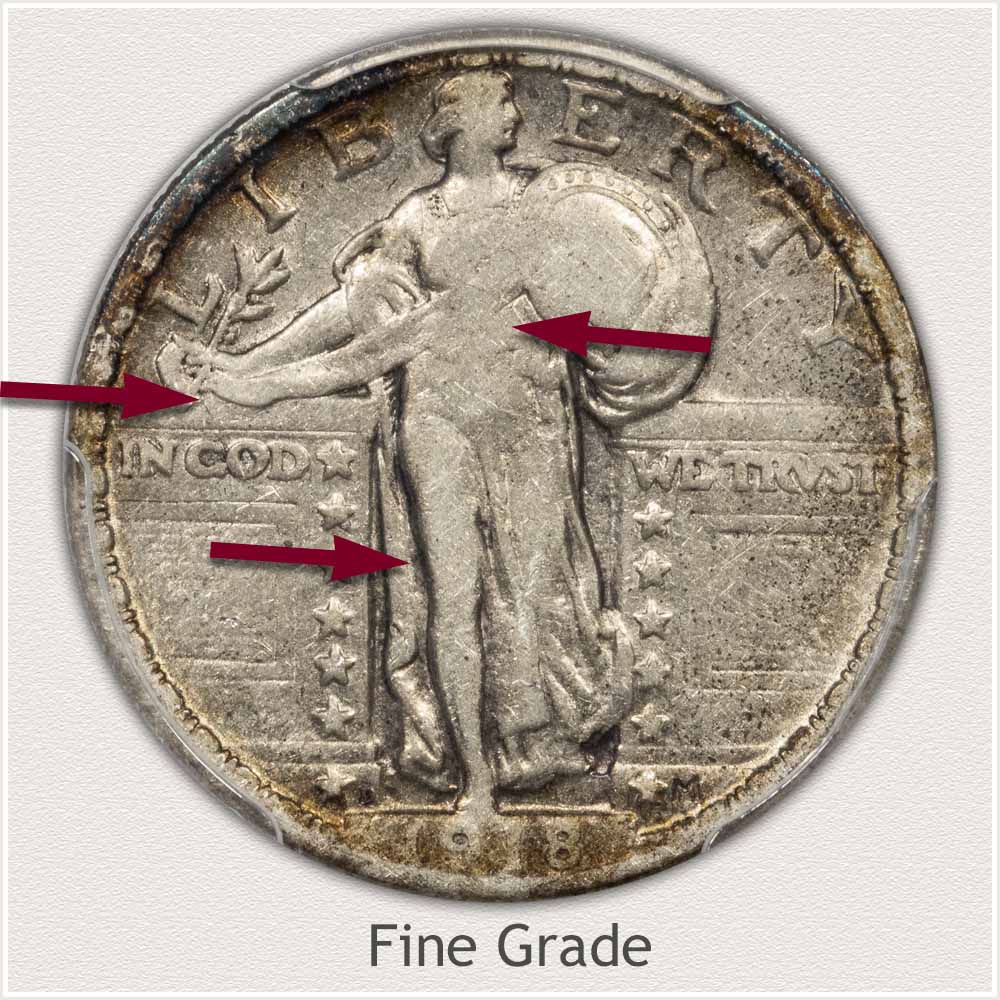 Fine Grade: Wear is clearly causing wide flat areas over the figure of Liberty on the example in Fine grade. Loss of fine details and blending of major elements of the design defines the grade.

The flat area over Liberty's knee is nearly the width of the leg. No contours remain defining the knee form hip or shin.

A scarf is visible at Liberty's hand, however, fades and becomes very faint crossing her mid-section. 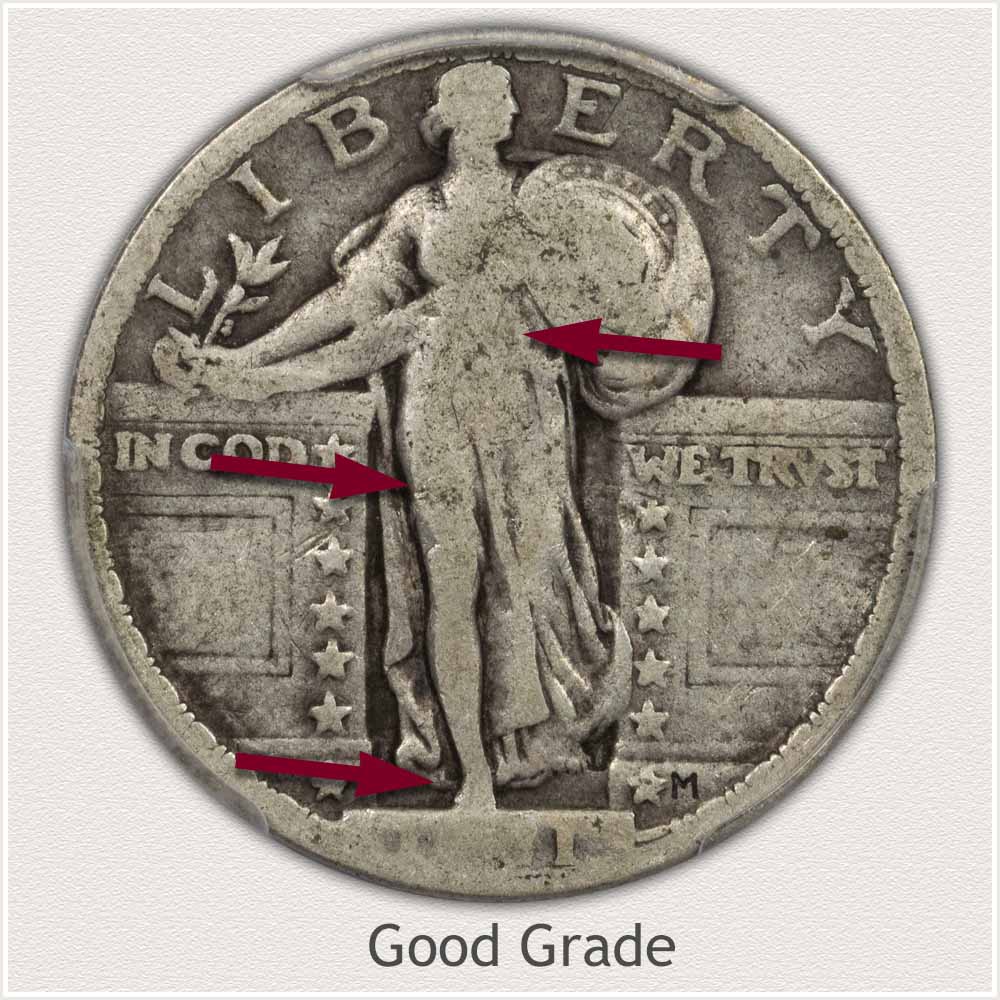 Liberty in outline form is a heavily worn coin. Her right leg is now a smooth outline with no evidence of contours. A continuous flat area extends from head to foot.

Lines of the scarf are missing as it crosses Liberty. Noted also is the edge of the shield has worn to the level of Liberty and merged.

Fine grade and above 1924 quarters are collectible quality and highly valued by collectors. Explore subtle points to grading these coins.

1924 marks a distinct break in the Standing Liberty quarters series. A subtle but important change in the design of the date was made in 1925 the following year. During the first years of the series 1916 to 1924 the date was placed high in relief above the surrounding area. Not protected, dates faded quickly and became hard to read. 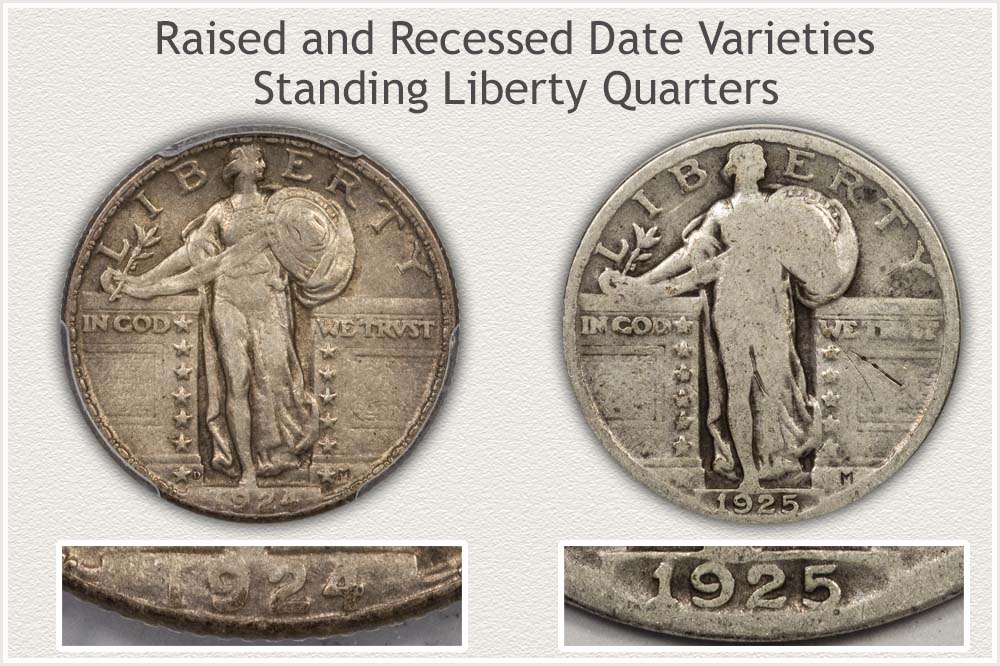 Illustrated is a 1924 quarter of the "raised date" variety, note the date is visible and complete. This coin grades Extremely Fine, slight wear overall. When inspected closely the date is worn to the condition of just beginning to merge with the step along the tops of the digits. On the rest of the coin light wear leaves fine detail intact. Any additional wear to the coin and the date begins to fade, often losing central digits entirely.

The second coin is a heavily worn 1925 quarter, grading Good condition. The date is easily recognizable and bold despite heavy wear overall to the coin. The recessed nature of the design protects the numerals. From 1925 to the end of the series in 1930, the "recessed date" variety shows clear dates despite wear.

Collectors strive for a presentable display of coins. A set of Standing Liberty quarters with faded dates needing explanation to recognize is less than ideal. Eye appeal of the first era coinage requires high grade examples. Any early era quarter of the series with a clear date is always in-demand and a scare coin with solid value.

Everyone agrees it is a beautiful coin. Easily one of the most popular coins with collectors. Discover the value that strong demand has placed on all dates and mint combinations of Standing Liberty quarters. Grading images to evaluate their condition and price chart listing all dates, mints and varieties.

From Bust quarters to Seated Liberty, Barber, Standing Liberty to Washington quarters. For the right coin, values are very high. Discover the rare coin in your box.

List your Standing Liberty quarters and record their values. Should you decide to sell... use the worksheet as an invoice and packing slip when sending coins through the mail to dealers.

An insight into what is collected today, what is popular, and numbers of collectors involved helps show Standing Liberty quarters are a series in demand. Compare to coin series spanning all denominations.

All U.S. coin values. Recognize the rest of your old coins using the image links leading to value charts. Standing Liberty quarters are one of many series of coins. Date | Mintmark | Condition is considered; all described and imaged within each series. Surprising value is often found in the smallest of detail.