The 1916 half dollar value represent a strong collector premium. All are scarce in any condition. 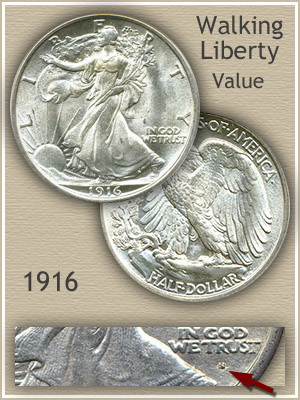 Silver half dollars of this era are scarce and your 1916 Walking Liberty half is the first year of mintage of what has become a very popular coin with collectors today.

Two things to judge and examine as you determine value.

First, the mint that struck your coin. Three mints coined halves that year, Philadelphia and Denver, both worth about the same. Halves from San Francisco, the third mint, however are rather elusive and valued higher.

Next, and very important is the condition of you coin, collectors pay close attention to wear, contact marks and more. With 1916 half dollar value climbing rapidly when found in nicer the condition, judge your old silver half dollars carefully.

Below are sections covering both mintmarks and their locations, also details involved in judging condition.

All 1916 half dollars are further separated in value depending on mintmarks, identified by an initial indicating the mint that produced the coin.

Highest in value is the San Francisco piece noted by an "S" the Denver mint used a "D" and the Philadelphia did not use a mintmark. The "S" or "D" is found on the obverse under "In God We Trust."

Since the day of minting this rare 1916 Walking Liberty half dollars has received excellent care. No doubt quickly separated from other coins soon after minting it is free of distraction bumps and bruises. Additionally it still radiates full silver-white luster over the entire coin, proof of special handling.

Many collectors appreciated the high quality and rarity and competed to a high bid of $1840 to add this superb 1916 half to their collection. As a collectible this coin combines, eye-appeal, no wear to its surfaces, full luster, and first year of issue status of the Walking Liberty half dollar series.

Carefully preserved by discerning collectors overtime the new owner of today possesses a rare gem of a half dollar. Every old half dollar minted before the 1920's is potentially a rare silver coin and is sought as a collectible, all must be judged individually to accurately discover their value.

Once you determine date and mintmark, the condition of your old silver half dollar drives the price. Collectors and dealers pay high premiums for coins in better than average condition. Judging the state of preservation allows you to find an accurate value of your 1916 half dollar from the chart above. 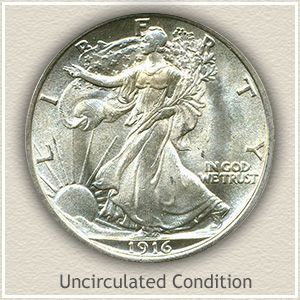 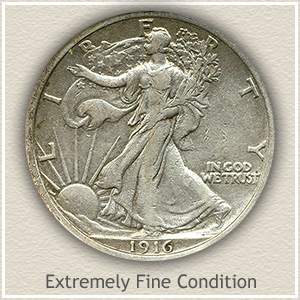 Extremely Fine: Eye appeal is nice for a coin in "extremely fine" condition. Details in Liberty's gown are still present, many of the small lines are prominent. Wear is obvious but not extensive, check Liberty's forward extending arm and on the back of her leg next to "In God We Trust." Your coin is a collectible grade with a premium 1916 half dollar value. 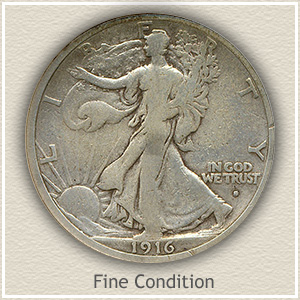 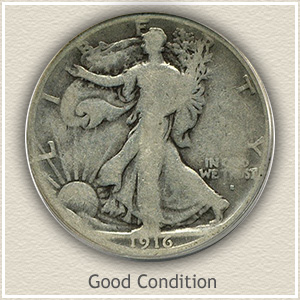 Good: Heavy wear covers the entire surface of your coin in "good" condition. Liberty's left arm has merged with the branches and her waist, the hand no longer visible. Rays extending from the sun have faded, the center ones missing half their length. Turning your attention to the rim it is often just touching the letters. Still desirable to collectors, 1916 half dollar value remains high.

★Return to Coin Values Discovery... find 1916 half dollar value and...

It is an excellent index with images and text links to all coin series, from Cents to Gold. Value charts, grading images and descriptions uncovers the common to rare coin values found in your box of old coins.