The price of silver helps raise 1920 half dollar value, currently all old 1920 silver half dollars are worth a minimum of $10.57 each. 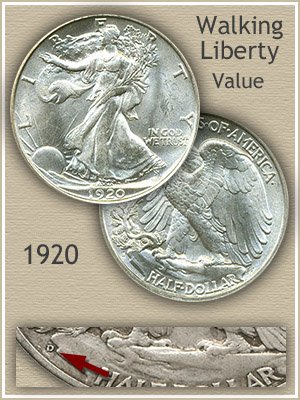 Your 1920 half is scarce, minted in the early years of the Walking Liberty half dollar series and not encountered as often as later years.

Values really begin to rise with the mint marked coins. Those minted in San Francisco and especially the Denver mint coins are highly prized by collectors. Half dollars are collected by date and by the mints that struck them, these two are elusive and eagerly sought.

Having a large and undeniable impact on the value of a 1920 half dollar is the condition of your coin. Above average coins are infrequently found and higher prices are paid. Accurately determining the "grade" of your coins condition often leads to an increase in value. Below are images of different degrees of wear, compare your coin, next check the values chart and discover how much your 1920 half dollar is worth.

All 1920 half dollars are further separated in value depending on mintmarks, a small initial indicating the mint that produced the coin.

Highest in value is the Denver piece noted by a "D" the San Francisco mint used an "S" and the Philadelphia mint did not use a mintmark. The "S" or "D" is found on the obverse under "In God We Trust."

Impressive and boldly struck the 1920 Walking Liberty half dollar pictured sold for an equally impressive bid of $4945 at a David Lawrence Rare Coin auction. Values placed upon these early halves that reach into the thousands of dollars indicates their rarity and demand by collectors.

In such a remarkable state of preservation, combined with the infrequency of availability to collectors, defines how much this rare half dollar is worth. The rare coins in elite collections of Walking Liberty halves are noted for the following qualities:

When offered, coins possessing the above qualities often sell at premiums above published price lists. Collectors and dealers bidding for this coin were concerned primarily with obtaining a prized 1920 half dollar.

Accurately value your 1920 half dollar by comparing to the grading images and finding the closest match. Values depend on determining your coin's condition, collectors judge old silver half dollars carefully before deciding how much they are worth. 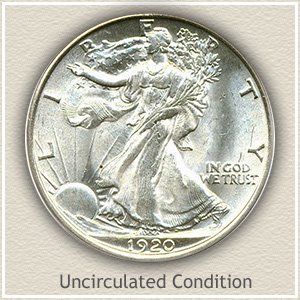 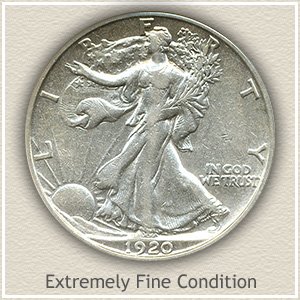 Extremely Fine: Light even wear limited to just the high points of the design is typical of a Walking Liberty half dollar in "extremely fine" condition. Folds and lines in Liberty's gown are clearly visible with slight loss of detail down the center. The sun and its rays still retain the roundness to their design, although wear is noticeable. Your coin is bold, very pleasing, well detailed and at the high end of 1920 half dollar value. 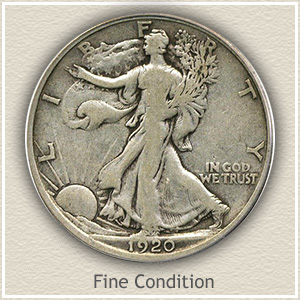 Good: Once a highly detailed Liberty with a flowing gown is now just a distinctly flat outline. It is no longer clear Liberty is holding many branches. Her head, torso and leg are all one smooth and flat area. Most collectors replace coins in this condition with finer examples, leaving these at the low end of 1920 half dollar value.

★Return to Coin Values Discovery... find 1920 half dollar value and... a complete index of image and text links to all US Coin series, from Cents to Gold. Old coins retain a strong collector following. Walking Liberty halves are an example highlighing the value of silver in old coins. Additiionally, within each series are rare date and mintmark combinations with even greater demand. Revisit your box of old coins, today's value charts show a steady increase.