At $8.54 each your 1944 half dollar value is the minimum a coin showing wear from circulation is worth. It is tied to today's silver coin value. 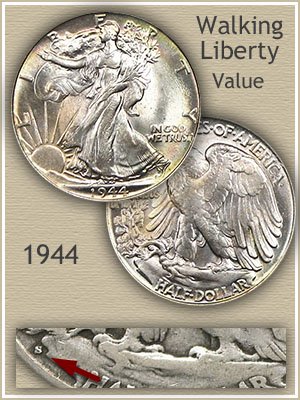 Small amounts of wear determine if your coin is worth more as a collectible or is valued only by the silver it contains.

Collectors and dealers place separate values on coins based on date, the mint that produced the coin and with 1944 half dollars - condition has the greatest impact on price.

Your coin is part of the popular Walking Liberty half dollar series and avidly collected. Popularity is a real plus, however many of these old silver half dollars are available in worn condition creating a large supply.

A real separation in values occurs if you coin is in "uncirculated" condition. A coin with no wear and still in the same condition as when leaving the mint is highly valued. Additionally if your old half dollar has exceptional eye appeal its value is even higher.

Pictured is a very nice uncirculated 1944 half dollar worth $50 to $60. Struck at the San Francisco mint and very pleasing in condition its value has risen above most uncirculated examples.

Below are sections covering both mintmarks and their locations, also details involved in judging the all important condition of your coin.

All 1944 half dollars are further separated in value depending on mintmarks, a small initial indicating the mint that produced the coin.

Highest in value is the San Francisco piece noted by an "S" the Denver mint used a "D" and the Philadelphia mint did not use a mintmark. The "S" or "D" is found on the reverse.

The Details of 1944 Half Dollar Value

As part of a coin collection, most 1944 half dollars included are ones in uncirculated condition. Values within this condition have a wide range. The quality of a coin's luster is noticed first and judged. How bold and detailed is the design? In the Walking Liberty series a bold strike is not the norm, for a well detailed coin values are higher. Blemishes to the surfaces are also part of value, their location and severity play a key role.

Pictured is a rare 1944 half dollar displaying the best of qualities, stunning luster, bold strike and few blemishes. Offered at a David Lawrence rare coin auction it realized $488 the result of multiple bids. Large quantities of circulated 1944 halves are available today, additionally, many uncirculated examples exist. The rarest and highest valued are the few gem quality silver halves surviving.

Examine your coin with a critical eye, does it have any nagging problem, large bumps, bruises or rim nicks? Small details of wear change the value of these old half dollars.

Once you determine date and mintmark, the condition of your old silver half dollar drives the price. Collectors and dealers pay high premiums for coins in better than average condition. Judging the state of preservation - known as "grading" - allows you to find an accurate value of your 1944 half dollar from the chart above. 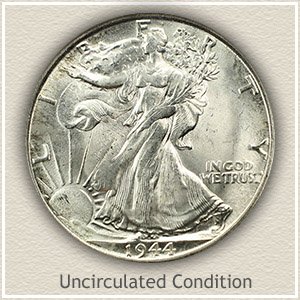 Uncirculated: If your coin was put away long ago before any wear from circulation took place it is in "uncirculated" condition and at the top of 1944 half dollar value. Typically toning has begun to cover parts of the coin, but the original luster is unbroken by wear. Examine Liberty's outstretched arm and rear leg, if the luster is missing because of wear, indicating the coin is circulated, these areas appear dull.

Extremely Fine: Evidence of some wear to the surfaces but remaining bold is a coin in "extremely fine" condition. Showing slight amount of design loss is the area through the center of Liberty, from her head to foot.

Fine: Loss of gown and hand detail down the center of Liberty is a half dollar in "fine" condition. From Liberty's head to her foot is now smooth and distinctly flat in appearance. The ends of the branches, Liberty's hand and waist have all merged into one. The disk of the sun is flat, the rays visible but fading quickly towards the points.

Good: Once a highly detailed Liberty with a flowing gown is now just a distinctly flat outline. It is no longer clear Liberty is holding many branches. Her head, torso and leg are all one smooth and flat area. Most collectors replace coins in this condition with finer examples, leaving these at the low end of 1944 half dollar value.

Many rare and valuable coins are found throughout the entire history of silver half dollars. Spanning 1794 through the 1960's discover not only your 1944 half dollar value but how much the rest of these rare silver coins are worth. Value charts list all by date and mintmark. The Franklin series of half dollars, Barber halves, Seated Liberty and the rare early Bust half dollars.

★Return to Coin Values Discovery... find 1944 half dollar value and... a complete index of image and text links to all US Coin series, from Cents to Gold. Old coins retain a strong collector following. Walking Liberty halves are an example highlighing the value of silver in old coins. Additiionally, within each series are rare date and mintmark combinations with even greater demand. Revisit your box of old coins, today's value charts show a steady increase.