Your 1947 half dollar value rises quickly above the $8.54 silver value if you determine it is in better than average condition. 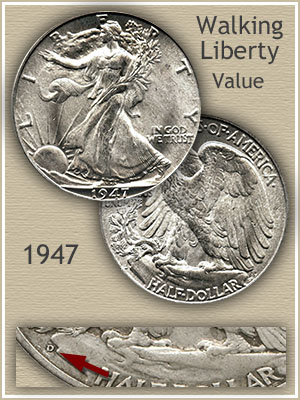 Your coin is significant as the last year of the Walking Liberty half dollars. Millions were minted and many remain today. Of those that have been saved the majority are in circulated, worn condition. These worn examples are considered as the coins in average condition and priced in relation to their silver value.

Examine closely all of these old silver half dollars as to wear. Coins put aside and collected before circulating through commerce are scarce. As you determine if your coin is worn and by how much, collectors refer to this judging as "grading." Images of half dollars in different stages of wear are further down the page. The descriptions and comparing your coins to these images gives you an idea of condition. Next checking the value chart shows how much a 1947 half dollar is worth.

The value of a 1947 half dollar in above average uncirculated condition often reaches $45 and higher. Pictured is a coin with exceptional luster and detail and importantly, no wear. Avidly sought by collectors in this high quality and scarce, a few outstanding examples are worth into the hundreds of dollars. Condition more than anything else plays a role in value.

All 1947 half dollars are further separated in value depending on mintmarks, a small initial indicating the mint that produced the coin.

Two mints produced halves in 1947, Denver which used a "D" mintmark and the Philadelphia mint. Halves struck in Philadelphia do not have a mintmark. The small "D" is located on the reverse. Look close to the rim on the right side under the branch.

Toning and 1947 Half Dollar Value

Attractive natural toning enhances and adds value to the 1947 half dollar pictured. All of the other main factors in price are found on this coin illustrated by the bold strike, absence of distracting marks and abrasions. Including bright luster illuminating from under a pale orange yellow toning.

Attracting the attention from multiple bidders, value of this 1947 half dollar reached $316. Collectors as they assemble sets of Walking Liberty half dollars strive to match the luster and color of each. Natural toning of silver progresses through many colors, light tan, yellow, orange, purples and blues. Variation of colors and combinations found on coins is considered as sets are completed.

Your coins are part of the very popular Walking Liberty series and sought by collectors and dealers. Judge your coins carefully, from the uncirculated condition to some of the lightly circulated coins are easily worth far above their silver value.

Condition often separates the common from rare silver coins, it is not always a rare date or mintmark. Collectors and dealers are striving to find the best for their collections or inventories. Each old coin is examined and a "grade" of its condition is determined. Grade your Walking Liberty half dollar against the images finding the closet grade match, giving you an accurate 1947 half dollar value. 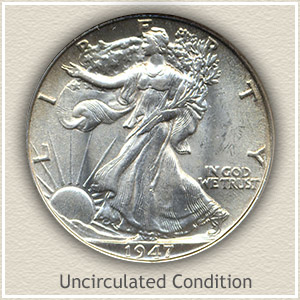 Uncirculated: A coin without wear is considered as "uncirculated" condition. Viewing you coin under a light, slowly rotate it, the shine and luster is continuous from edge to edge. Circulation renders the tops of the designs dull by removing the delicate luster. Look for this running down the center of Liberty. If you can confirm your 1947 half dollar is uncirculated it is at the high end of value.

Extremely Fine: Eye appeal is nice for a coin in "extremely fine" condition. Details in Liberty's gown are still present, many of the small lines are prominent. Wear is obvious but not extensive, check Liberty's forward extending arm and on the back of her leg next to "In God We Trust." In the years to come halve in extremely fine condition have the possibility of gaining premium values.

Good: Heavy wear and overall flatness to the coin define the "good" condition. Rims have begun to connect to the tops of the lettering and starting to obscure the date. Areas of "In God We Trust" are becoming faint. The center of Liberty is flat with no details. In this condition the typical 1947 half dollar value is based on silver content.

★Return to Coin Values Discovery... find 1947 half dollar value and... a complete index of image and text links to all US Coin series, from Cents to Gold. Old coins retain a strong collector following. Walking Liberty halves are an example highlighing the value of silver in old coins. Additiionally, within each series are rare date and mintmark combinations with even greater demand. Revisit your box of old coins, today's value charts show a steady increase.