The price of silver determines 1943 half dollar value, currently all old silver Walking Liberty half dollars are worth a minimum of $8.54 each. 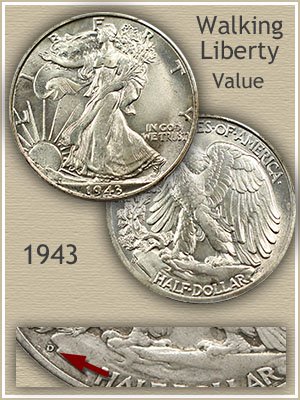 Two things are of importance to collectors of these Walking Liberty halves and they determine the value of your 1943 half dollar. Tops on the list is condition. Many halves of the 1940's are available to choose from when a collector is looking for a particular coin. Finding one in choice mint condition from the many is the challenge as most are heavily worn.

Your old silver half dollar if in the condition pictured to the right is of special interest to collectors and dealers. In "brand new" condition, a coin with no wear to its surfaces is scarce and worth a premium.

Second and worth noting, is the Denver mint 1943 half, in "extremely fine" condition it is beginning to show collector interest. It is now often valued slightly ahead of the Philadelphia and San Francisco minted halves. Information about mint marks and their location is found under the value chart.

1943 half dollars were produced in Philadelphia, Denver and San Francisco.

The different mints are identified by mint marks, "D" for the Denver mint and "S" used by the San Francisco mint. Denver mint coins have proven the elusive ones to find, and a nice treasure if yours is the "D" mintmark. Those without a mintmark where struck at Philadelphia. Examine the reverse along the rim in front of the eagle, if the mark is present it's small and occupying the space just under the branch.

Opinion and 1943 Half Dollar Value

Walking Liberty half dollars were minted in the millions of pieces in 1943. With a large number available the market for the coin is strong for both its silver value and its possible higher collector value. The separation of the two is the condition of the coin.

View your coin with a critical eye, does it have any nagging problem, large bumps, bruises or rim nicks. Is it solid for the grade, one without these drawbacks? If so it has the potential as a collectible. As an example of value potential, occasionally a truly remarkable coin is offered at auction.

One of the finest know, best preserved 1943 halves was bid to $793 at a David Lawrence rare coin auction. In the same condition as the day minted, and well cared for since, a truly rare half dollar in such condition. All of your old coins when judged for their condition can be separated common to rare.

Collectors strive to add nicer condition halves to their collection and generally fewer of these old silver half dollars survive in better condition. To accurately place a value, each are judged and a "grade" is resolved. Dealers and collectors both use the terms found below. Compare your coin to the images and descriptions, finding the grade and 1943 half dollar value. 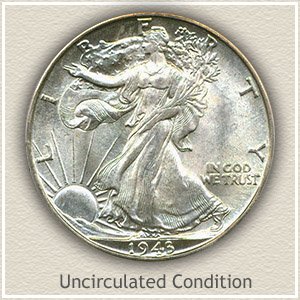 Extremely Fine: Eye appeal is nice for a coin in "extremely fine" condition. Details in Liberty's gown are still present, many of the small lines are prominent. Wear is obvious but not extensive, check Liberty's forward extending arm and on the back of her leg next to "In God We Trust." If struck at the Denver mint your coin is a collectible in this grade with a slight premium to its 1943 half dollar value.

Good: Heavy wear and overall flatness to the coin define the "good" condition. Rims have begun to connect to the tops of the lettering and starting to obscure the date. Areas of "In God We Trust" are becoming faint. The center of Liberty is flat with no details. In this condition the typical 1943 half dollar value is based on silver content.

Many rare and valuable coins are found throughout the entire history of silver half dollars. Spanning 1794 through the 1960's discover not only your 1943 half dollar value but how much the rest of these rare silver coins are worth. Value charts list all by date and mintmark. The Franklin series of half dollars, Barber halves, Seated Liberty and the rare early Bust half dollars.

★Return to Coin Values Discovery... find 1943 half dollar value and... It is an excellent index with images and text links to all coin series, from Cents to Gold. Value charts, grading images and descriptions uncovers the common to rare coin values found in your box of old coins.