Starting 1936 half dollar value is $8.54 each, all are valuable because of silver. 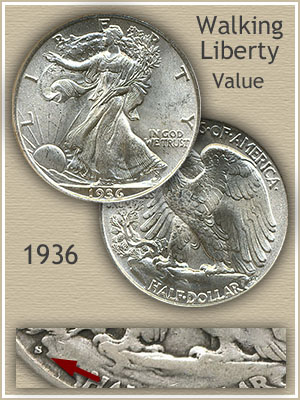 However your coin is part of the 1930's era Walking Liberty half dollar series and is scarce compared to coins minted in the 1940's.

Values really begin to rise with the mint marked coins. Those minted in Denver and especially the San Francisco mint coins are highly prized by collectors. Half dollars are collected by date and by the mints that struck them and these two are elusive and eagerly sought.

Having a large and undeniable impact on the value of a 1936 half dollar is the condition of your coin. Above average coins are infrequently found and higher prices are paid. Accurately determining the "grade" of your coins condition often leads to an increase in value. Below are images of different degrees of wear, compare your coin, next check the values chart and discover how much your 1936 half dollar is worth.

1936 half dollars were produced in Philadelphia, Denver and San Francisco.

The different mints are identified by mintmarks, "D" for the Denver mint and "S" used by the San Francisco mint. Denver mint coins have proven the elusive ones to find and a nice treasure if yours is the "D" mintmark. Those without a mintmark where struck at Philadelphia. Examine the reverse along the rim at the eight o'clock position, if the mark is present it's small and occupying the space just under the branch.

Interest in collecting the Walking Liberty half dollar series has been high since the design was introduced. And collecting top quality examples is always the goal. The gem 1936 half pictured meets the expectations of most discerning collectors.

In the market place this coin was auctioned by David Lawrence Rare Coin Auctions. When finished, it took a final bid of $877 to purchase the coin.

In particular this coin has several qualities setting it apart. Bright, lustrous eye appeal, mark free surfaces, and a well defined strike bringing out all design details. In the collecting world it is know as a condition rarity.

Many 1936 halves survive today, however few in this gem quality. Date, mintmark, and importantly the condition, each found with this coin is a rare combination. All of these old silver half dollars have potential.

Accurately value your 1936 half dollar by comparing to the grading images and finding the closest match. Values depend on determining your coin's condition, collectors judge old silver half dollars carefully before deciding how much they are worth. 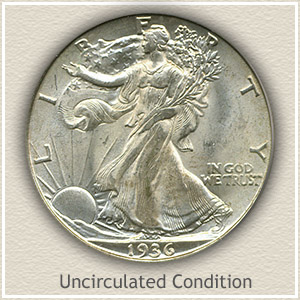 Uncirculated: If your coin was put away long ago before any wear from circulation took place it is in "uncirculated" condition and at the top of 1936 half dollar value. Typically toning has begun to cover parts of the coin, but the original luster is unbroken by wear. Examine Liberty's outstretched arm and rear leg, if the luster is missing because of wear, indicating the coin is circulated, these areas appear dull.

Extremely Fine: Eye appeal is nice for a coin in "extremely fine" condition. Details in Liberty's gown are still present, many of the small lines are prominent. Wear is obvious but not extensive, check Liberty's forward extending arm and on the back of her leg next to "In God We Trust." Your coin is a collectible grade with a premium 1936 half dollar value.

Fine: Loss of gown and hand detail down the center of Liberty is a half dollar in "fine" condition. From Liberty's head to her foot is now smooth and distinctly flat in appearance. Her arm and hand has merged with the branch and her waist. The disk of the sun is flat, the rays visible but fading quickly towards the points.

Good: Heavy wear covers the entire surface of your coin in "good" condition. Liberty's left arm has merged with the branches and her waist, the hand no longer visible. Rays extending from the sun have faded, the center ones missing half their length. Turning your attention to the rim it is often just touching the letters.

★Return to Coin Values Discovery... find 1936 half dollar value and... It is an excellent reference list with images and text links to all US coin series, from Cents to Gold. Value charts are combined with grading images and descriptions to uncover the wide range of common to rare coin values found in your box of old coins.