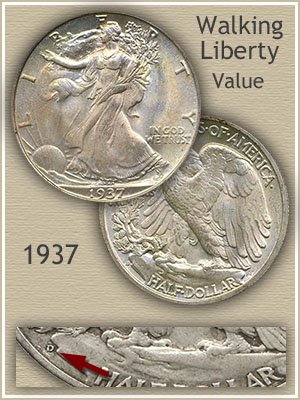 The price of your old Walking Liberty half dollar can easily go higher. The first item to check is the presence of a mintmark. significantly fewer halves were minted at the Denver and San Francisco mints in 1937 and have proven elusive. See further down the page a close-up image to help locate these small mintmarks.

Raising the value of your 1937 half dollar often results from its condition. A stunning example pictured to the right is very desirable to collectors and dealers. Both are willing to pay upwards of $75 to add it to their holdings. A coin surviving from so long ago in a condition as if it just left the mint is a rarity.

These older 1930's silver half dollars in the Walking Liberty series are avidly sought by collectors willing to pay high prices for the right coin. Date, mintmark as well as condition drive your 1937 half dollar value.

Mintmarks - used to identify the mint striking the coin, also determine how much your 1937 half dollar is worth.

A year known for its low production of branch mint half dollars. Closely examine the reverse along the rim for the scarce and valuable mintmarks. One of three mints struck your coin, either Philadelphia, no mintmark - San Francisco "S" mark - or Denver, "D" mark.

Special eye appeal sets the 1937 half dollar pictured apart from most high grade halves. Liberty's frost white portrait is set atop mirrored fields. A scarcity known as "proof like" because of the sharp contrast of the mirror to frosty surfaces.

A special "proof like" look combined with a bold strike and bright luster attracted bids at a David Lawrence rare coin auction all the way to $839. Old silver half dollars in top condition are appreciated and highly valued.

Many older coins survive today is heavily worn condition, fewer in lightly worn shape. The odds are against remaining in freshly minted condition. Dealers are in constant need of these gem halves to satisfy collector's demands.

1937 Half Dollar Value is Conditional

Once you determine date and mintmark, the condition of your old silver half dollar moves the price. Collectors and dealers pay high premiums for coins in better than average condition. Judging the state of preservation allows you to find an accurate value of your 1937 half dollar from the chart above.

Uncirculated: A coin without wear is considered as "uncirculated" condition. Viewing you coin under a light, slowly rotate it, the shine and luster is continuous from edge to edge. Circulation renders the tops of the designs dull by removing the delicate luster. Look for this running down the center of Liberty. If you can confirm your 1937 half dollar is uncirculated it is at the high end of value.

Extremely Fine: Evidence of some wear but remaining bold is a coin in "extremely fine" condition. Showing the greatest amount of design loss is the area through the center of Liberty. Folds in her gown have worn smooth over the area of her leg. Once rounded features, the branches, sun rays and Liberty's face now are flattened slightly from circulation.

Good: Heavy wear covers the entire surface of your coin in "good" condition. Liberty's left arm has merged with the branches and her waist, the hand no longer visible. Rays extending from the sun have faded, the center ones missing half their length. Turning your attention to the rim it is often just touching the letters. It is possible in the future mint marked halves will trade at a premium, however currently 1937 half dollar value in "good" condition is tied to silver.

★Return to Coin Values Discovery... find 1937 half dollar value and... a complete index of image and text links to all US Coin series, from Cents to Gold. Old coins retain a strong collector following. Walking Liberty halves are an example highlighing the value of silver in old coins. Additiionally, within each series are rare date and mintmark combinations with even greater demand. Revisit your box of old coins, today's value charts show a steady increase.