The price of silver determines the minimum 1935 half dollar value, currently all old silver half dollars are worth $8.54 each. 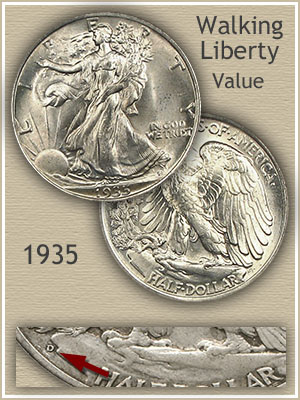 Also there are two very important points to consider and confirm:

1) The mint that struck your coin has an impact on value. Branch mint coins are encountered less often and are worth more.

2) How well has your coin survived and in what condition? This alone has the greatest effect on the value of a 1935 half dollar.

Collectors and dealers place separate values on coins based on date, the mint that produced the coin and condition. Realize your coin is part of the popular Walking Liberty half dollar series and avidly collected. Often there is a remarkably wide range in value for seemingly small differences. For example a small mintmark on the reverse and your coin is now worth double minimum silver value.

Highly sought are nice condition coins. The stunning half pictured is a coin worth well over $100, see the Gem quality coin featured below. With 1935 half dollar value approaching a hundred dollars when found in these rare states of preservation, judge your old silver half dollars with a critical eye.

Below are sections covering both mintmarks and their locations, also details involved in judging condition.

Mintmarks indicating the mint that struck your coin also determine how much your 1935 half dollar is worth.

The mints at the time were either Philadelphia, San Francisco identified by an "S" mark and Denver identified by a "D" mintmark. No mark was used by the Philadelphia mint. These mintmarks are on the reverse, along the left side close to the rim.

Pictured is a coin that has survived until today in virtually the condition it left the mint. The bright silver luster has remained undiminished. The surfaces have not received any bumps or nicks. And few 1935 halves from the Denver mint are available this nice.

Collectors took notice of the seldom offered opportunity to add a gem condition 1935 Walking Liberty half to their collection. Multiple competing bids drove the price to $2300 at a David Lawrence rare coin auction. High surviving quality combined with a scarce date and mintmark defined the value of this coin.

Your coins if approaching this quality need careful examination. The price for a typical quality uncirculated 1935 half is far below some of the prices paid for the high gem quality examples.

1935 Half Dollar Value is Conditional

Collectors assembling a set of Walking Liberty halves strive to add high quality examples to their collection. Generally fewer of these old silver half dollars survive in better condition, as a result these nicer coins are worth more. To accurately place a value on yours, each is judged and a "grade" is resolved. Dealers and collectors both use the terms found below. Compare your coin to the images and descriptions, finding the grade and 1935 half dollar value. 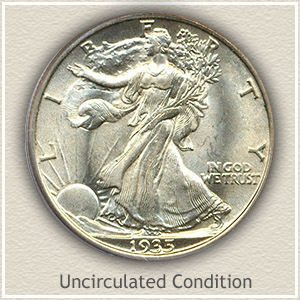 Uncirculated: A coin without wear is considered as "uncirculated" condition. Viewing you coin under a light, slowly rotate it, the shine and luster is continuous from edge to edge. Circulation renders the tops of the designs dull by removing the delicate luster. Look for this running down the center of Liberty. If you can confirm your 1935 half dollar is uncirculated it is at the high end of value.

Good: In the heavily worn "good" condition this old silver half dollar depicts Liberty as an outline. From her outreaching arm to her foot all details are now worn smooth, only major folds in the gown are evident. The once protective rim is now touching the tops of some letters and fading into the date. In this condition most 1935 half dollar value is its silver value.

Many rare and valuable coins are found throughout the entire history of silver half dollars. Spanning 1794 through the 1960's discover not only your 1935 half dollar value but how much the rest of these rare silver coins are worth. Value charts list all by date and mintmark. The Franklin series of half dollars, Barber halves, Seated Liberty and the rare early Bust half dollars.

★Return to Coin Values Discovery... find 1935 half dollar value and... It is an excellent reference list with images and text links to all US coin series, from Cents to Gold. Value charts are combined with grading images and descriptions to uncover the wide range of common to rare coin values found in your box of old coins.