The price of silver helps raise 1929 half dollar value, currently your old silver half dollar is worth a minimum of $9.34 each. 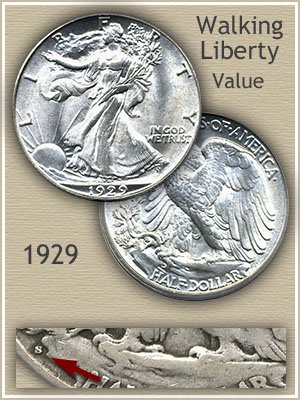 Silver half dollars of this period are scarce and your 1929 Walking Liberty half is the last of the 1920's era of what has become a very popular series with coin collectors today.

There are two important details to examine and judge as you determine value.

First, the mint that struck your coin. Two mints produced halves that year, Denver and San Francisco, both are worth about the same in heavily worn condition. However halves minted in San Francisco are rather elusive in above average condition and valued higher.

Below are sections covering both mintmarks and their locations, also details involved in judging condition. Take your time, examine these points to accurately discover how much your coins are worth.

Further distinction is made of its condition. 1929-D is a coin minted in Denver, "S" indicates yours was minted at the San Francisco mint. Mintmarks placed on the coins were used to identify each mint and are either a small "D" or "S." Find the mark by studying the reverse in the space close to the rim before "Half Dollar."

The stunning appearance of a 1929 half dollar produced a stunning price at a David Lawrence Rare Coin Auction. The bidding finally stopped at $3622. Seldom is offered a coin with the "look" of the one pictured. Adding to the quality and value…

1) A bold strike - a series known for a having a weak strike this is a rare exception.

2) Clear surfaces - a pleasing lack of abrasions and contact marks.

The eye appeal results in a rare half dollar, easily becoming the finest example in any Walking Liberty half dollar collection.

With coins approaching perfection, no set value is possible. The demand and ultimate value is left to serious collectors and rare coin auctions.

Accurately value your 1929 half dollar by comparing it to the images of halves in different stages of wear and finding the closest match. A practice know as "grading." Values depend on determining your coin's condition, collectors judge old silver half dollars carefully before deciding how much they are worth. Also look at your coin with a critical eye, does it have any nagging problem, large bumps, bruises or rim nicks. A coin solid for the grade, is an honestly worn coin, one without these drawbacks. 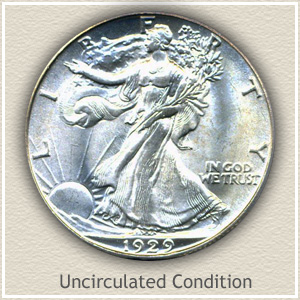 Uncirculated: A coin without wear is considered as "uncirculated" condition. Viewing you coin under a light, slowly rotate it, the shine and luster is continuous from edge to edge. Circulation renders the tops of the designs dull by removing the delicate luster. Look for this running down the center of Liberty. If you can confirm your 1929 half dollar is uncirculated it is at the high end of value. 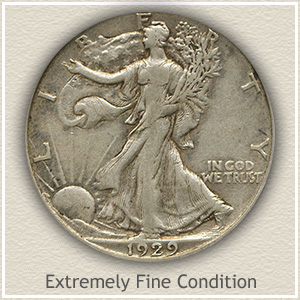 Extremely Fine: Eye appeal is nice for a coin in "extremely fine" condition. Details in Liberty's gown are still present, many of the small lines are prominent. Wear is obvious but not extensive, check Liberty's forward extending arm and on the back of her leg next to "In God We Trust." Your coin in this condition is a collectible grade with a premium 1929 half dollar value. 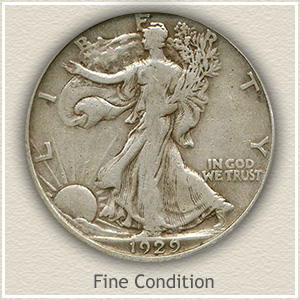 Fine: As the Walking Liberty half circulates a thin unbroken line with complete loss of detail develops extending from Liberty's head to her foot above the date. At the point where Liberty's hand, the ends of the branches and waist meet all have merged into one. Such a coin is in "fine" condition. There is still a depth and roundness to Liberty's figure.

Good: In the heavily worn "good" condition this old silver half dollar depicts Liberty as an outline. From her outreaching arm to her foot all details are now worn smooth, only major folds in the gown are evident. The once protective rim is now touching the tops of some letters and fading into the date. In this condition most of your 1929 half dollar value is its silver value.

Many rare and valuable coins are found throughout the entire history of silver half dollars. Spanning 1794 through the 1960's discover not only your 1929 half dollar value but how much the rest of these rare silver coins are worth. Value charts list all by date and mintmark. The Franklin series of half dollars, Barber halves, Seated Liberty and the rare early Bust half dollars.

★Return to Coin Values Discovery... find 1929 half dollar value and... It is an excellent reference list with images and text links to all US coin series, from Cents to Gold. Value charts are combined with grading images and descriptions to uncover the wide range of common to rare coin values found in your box of old coins.