The price of silver determines 1941 half dollar value, currently all old silver half dollars are worth a minimum of $8.54 each. 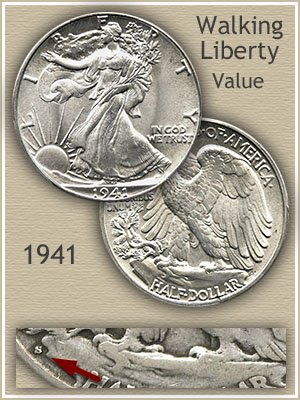 Your coin is part of the Walking liberty half dollar series. In the 1940's the US began to produce large numbers of these coins and many survive today. It is however a very popular coin series and in demand by collectors. What raises the value on any of these old half dollars is its condition.

Value of a 1941 half dollar in "brand new" condition, what dealers and collectors refer to as "uncirculated" can easily reach $30 and higher. The image is an exceptionally nice coin in gem uncirculated condition, very rare, and worth over $100.

Also potentially raising the value of your old half dollar is the mint that struck the coin. San Francisco halves minted in 1941 are found less often and do have a small price premium. Here condition is important as some with just slight wear are worth more than minimum silver value. The two other mints Philadelphia and Denver are comparable in value.

Both mintmarks and evaluating you coin's condition are covered in detail below, allowing you to separate the common from rare silver coins.

For example 1941-D is a coin minted in Denver, "S" indicates one minted at the San Francisco mint. Mintmarks placed on the coins were used to identify each mint and are either a small "D" or "S." The Philadelphia mint did not use a mintmark on Walking Liberty half dollars. Examine the reverse along the rim just under the eagle.

Above Average 1941 Half Dollar Value

Pictured is an example of a coin because of exceptional condition its value is far above most 1941 half dollars. There are available to collectors many "uncirculated" halves from this era, but those in ultra nice condition are rare and highly sought.

When presented at a David Lawrence rare coin auction this outstanding coin was desired by many. The resulting final bid $241 shows the strength of the Walking Liberty series. The high value of this coin also indicates how few of the uncirculated halves are in gem condition. Auction results of ever higher value have been recorded.

Your old silver half dollars are all worth a great deal because of the underlining silver value. The ones in better condition that have nice eye appeal and abundant detail need close examination. The potential as a collectible and higher value is worth a second look at your old coins.

1941 Half Dollar Value is Conditional

Condition has a large impact on silver coin values, it is not always the date or mintmark that is rare. Collectors and dealers are striving to find the best for their collections or inventories. Each old coin is examined and a "grade" of its condition is determined. Grade your Walking Liberty half dollar against the images finding the closet grade match, giving you an accurate 1941 half dollar value. 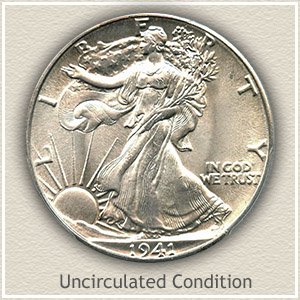 Uncirculated: A coin without wear is considered as "uncirculated" condition. Viewing you coin under a light, slowly rotate it, the shine and luster is continuous from edge to edge. Circulation renders the tops of the designs dull by removing the delicate luster. Look for this running down the center of Liberty. If you can confirm your 1941 half dollar is uncirculated it is at the high end of value. 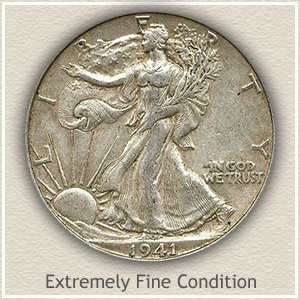 Fine: Wear has taken its toll and merged parts of the smaller design elements of a coin in "fine" condition. In the center where Liberty's left arm is holding the branches, the majority of the separation has disappeared, leaving an indistinct flattened area.

Good: Heavy wear and overall flatness to the coin define the "good" condition. Rims have begun to connect to the tops of the lettering and starting to obscure the date. Liberty is just an outline. In this condition the typical 1941 half dollar value is based on silver content.

★Return to Coin Values Discovery... find 1941 half dollar value and... a complete index of image and text links to all US Coin series, from Cents to Gold. Old coins retain a strong collector following. Walking Liberty halves are an example highlighing the value of silver in old coins. Additiionally, within each series are rare date and mintmark combinations with even greater demand. Revisit your box of old coins, today's value charts show a steady increase.