Your 1964 quarter value starts a $3.97 each. This minimum price is because of the large silver content in old quarters. 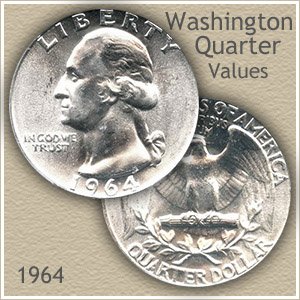 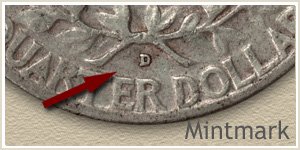 Other factors do contribute to raising the value of your old coin, particularly the condition and determining which mint produced the quarter.

Beginning with the mintmark. Two mints struck Washington quarters in 1964, Philadelphia and Denver. Those minted in Philadelphia are worth a small premium today. You can tell them apart by the small "D" placed on the reverse by the Denver Mint.

The next challenge is determining the condition of your old quarter. Commonly found worn, see if your coin is in a higher more collectible "Uncirculated" condition, and compare it to the "Grading" images below.

A popular series with collectors and elusive in the higher grades, your 1964 quarter is worth a close examination.

The coin value chart breaks the prices down by date, mintmark and state of preservation.

The "1964-D" is a quarter minted by the Denver mint in 1964 and values are given in four different "Grades." How to grade your coins is covered below.

The most valuable Washington quarters are always the "Uncirculated" examples, the first image. The lowest value quarters are in "Good" condition. Most collectors eventually replace these "Good" coins with a finer example. 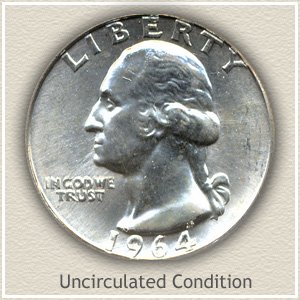 Uncirculated: The top grade in both quality and value, requires close examination to confirm. Inspect the highest points of design and the fine details for evidence of wear. It is most noticeable as a dulling of the surface and breaks in the mint luster. 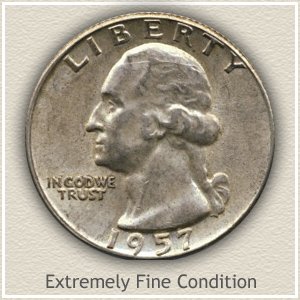 Extremely Fine: The lightest of wear and abrasion begins to show in the hair and curls over Washington's ear. Minute details have disappeared and mint luster is absent from the neck and cheek. This quarter is worn, but very lightly. 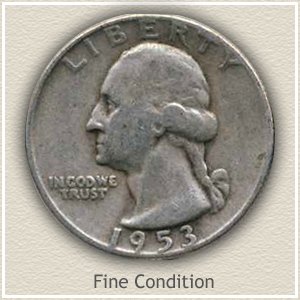 Fine: Still a respectable coin despite moderate wear. The hair and curls now show only major details. The neck and chin are worn to the point of merging. However the rim and date are clearly separated. 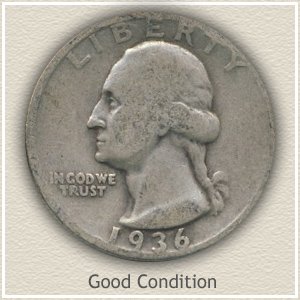 Good: All the major details show but very flattened by wear. The tops of the letters have begun to merge into the rim. In this grade, 1964 quarter value is their silver content.

Date by Date
In Depth Washington Quarter Value
1932 to1948

True, the 1964 quarter value is tied closely to the price of silver. However, in the Washington quarters series a few rare dates and mint marks stand out, if found in high condition. Compare your coins to the grading images and separate then by condition. Check for rare dates on the value chart.

Including more relating to your 1964 quarter value. Easily find how much your old coins are worth.

From Bust Quarters to Seated Liberty, Barber, Standing Liberty and Washington quarters. All series include Grading Images to judge the condition of your coins and coin value charts. 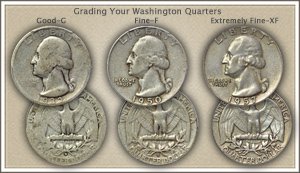 Follow the steps to sell silver coins. Determine value first; then how to find a dealer. Images and descriptions help recognize the dates and series US coins contained silver.

Do you have other coin denominations?

A stunning example, gem quality 1964-D quarter was auctioned by DLRC Auctions $47.15. Certainly not an extremely high price, but an indication of how few from so many minted have remain in nice condition.

This quarter has all the traits of gem quality, lustrous blue-silver color and mark free surfaces.

Your 1964 quarter is worth a close inspection. Many where put away straight from the bank, saving them from circulation and wear. There are gems out there waiting for discovery.