At $7.97 each your 1954 Franklin half dollar value is directly tied to its silver worth. Heavy with silver this is its minimum bullion value. Collectible status is identified through a step-by-step process.

Collector value enters the picture in the "mint state" grade. It is these quality coins that are in demand by collectors. Higher grade examples are recognized by comparing to images.

Use the wholesale value chart above as a guide to narrow a range to how much these old half dollars are worth.

Three steps are outlined below leading an accurate judgment of your coin.

Important Variety of 1954 Half Dollar to Recognize

Three mints combined to produce over 43 million 1954 half dollars. Philadelphia, the main mint, Denver, and the San Francisco mint worked hard to supply half dollars. Numbers struck by the different mints varied considerably with San Francisco the least in coinage.

To identify their coins the branch mints Denver and San Francisco used mintmarks placed on the reverse. These issues along with Philadelphia are represented on the value chart.

Each mint variety of 1954 is collected as part of complete set of Franklin Half dollars. Refer to the images to locate each mintmark. 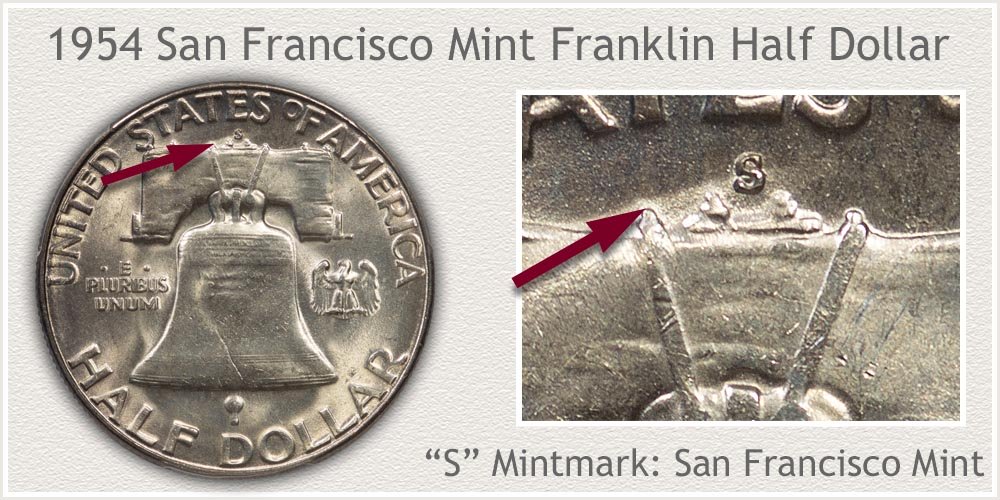 1954 became the last year the San Francisco mint produced Franklin half dollars. Finishing its minting of the series with 4.9 million pieces struck, these are a historical "last of" issue.

San Francisco minted coins are noted by an "S" mintmark on the reverse. A small "S" mark above the beam and between the straps was placed on all Franklins halves struck by the San Francisco mint. An accurate description of a coin includes both date and mint of issue. 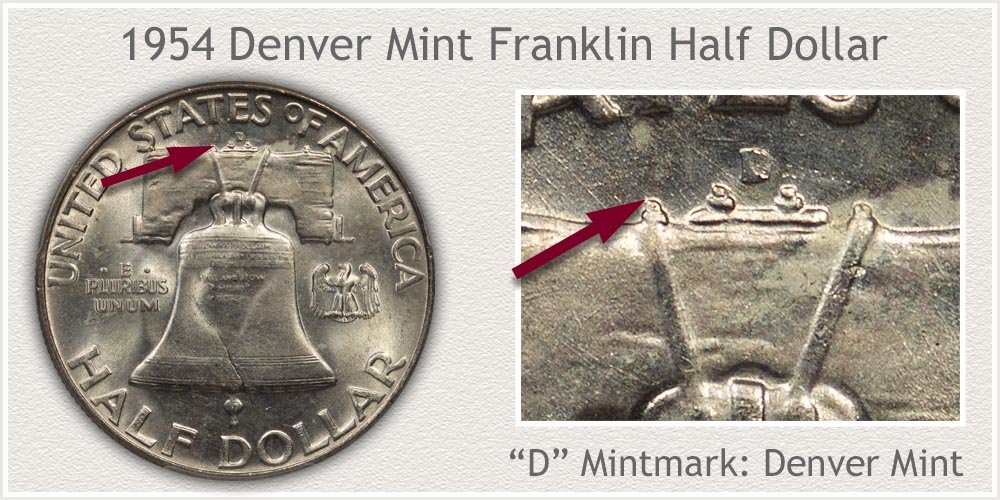 Denver, the branch mint supplying the central U.S. contributed a large portion of the total Franklin halves produced in 1954. Striking and placing into circulation over 25.4 million half dollars

An abundant variety today, most in circulated, worn condition move up and down in value following the price of silver. Finding a nice 1954 Denver half, those with little to no wear on the surface is the challenge collectors pursue. 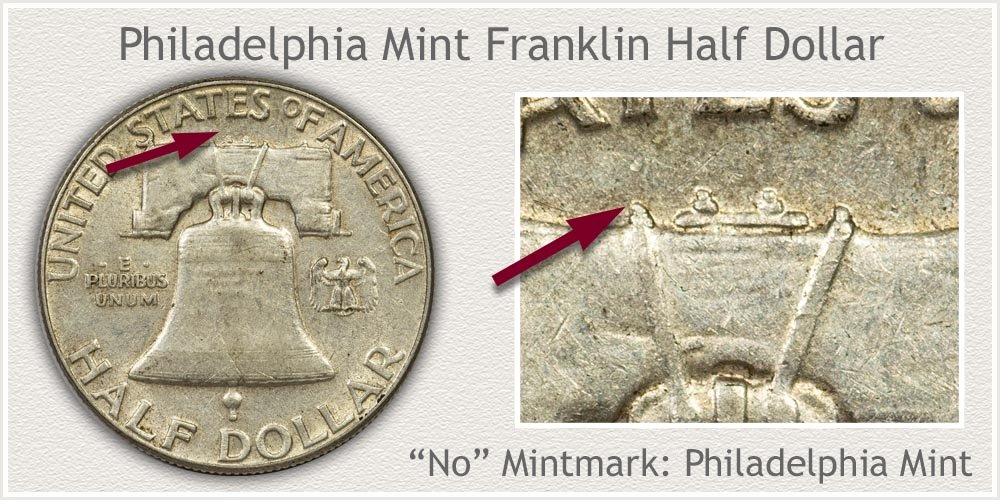 Adding to a large production year for Franklin halves, the Philadelphia mint struck just over 13 million half dollars in 1954.

The price of silver forms a strong intrinsic value to these 90% silver coins. Coins with visible wear to the surface trade on the silver content value. Collectors seeking the high-end condition pieces place premiums on eye appealing examples.

Identify Philadelphia coinage by the absence of a mintmark. Philadelphia did not place mintmarks on its production in the 1950's. The area reserved for mintmarks above the beam is empty, confirming the Philadelphia mint struck the coin.

Grading is judging the surface of the coin, its preservation, and evidence of wear. Use the images below to compare your coin against examples of the different grades finding a match.

Take your time, it is rather easy to judge a distinctly worn coin, however the difference is subtle to reach the mint state grade. 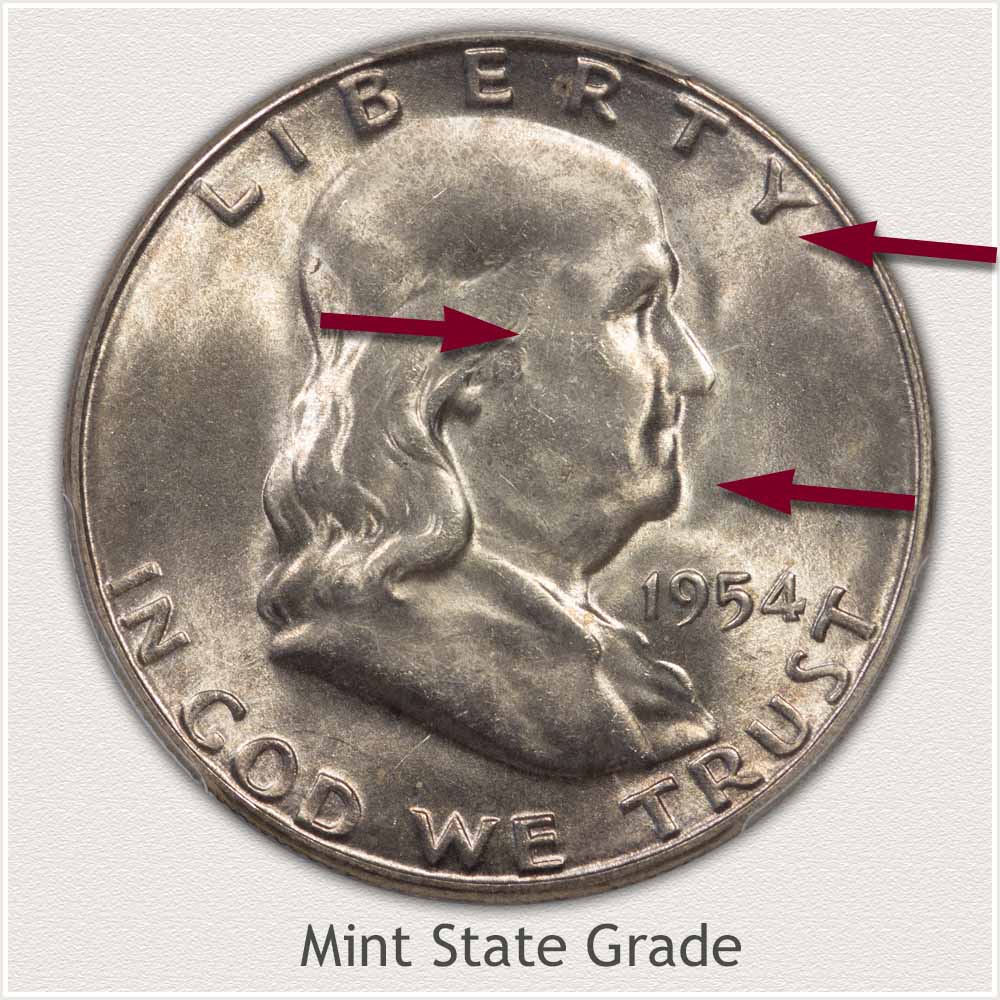 Mint State: A half dollar without any wear to the surface is defined as "mint state."

An excellent indicator of this top grade is the presence or absence of mint luster. Imparted during the minting process its shine and texture quickly wears, becomes smooth and dull showing the effects of wear. Slowly rotate your coin under a light, notice the band of brightness traveling across the surface. This must be complete to qualify as mint state.

Franklin's chin, cheek, and just above the brow are the highest points of the design and first to wear. A dulling of the metal, and when viewed with magnification as smoothness to the metal indicates wear. Take your time to judge if you believe your coin is a candidate for the mint state grade. Additionally, compare the coin with the "About Uncirculated" grade to spot subtle differences. It is a possible candidate for premium 1954 Franklin half dollar value. 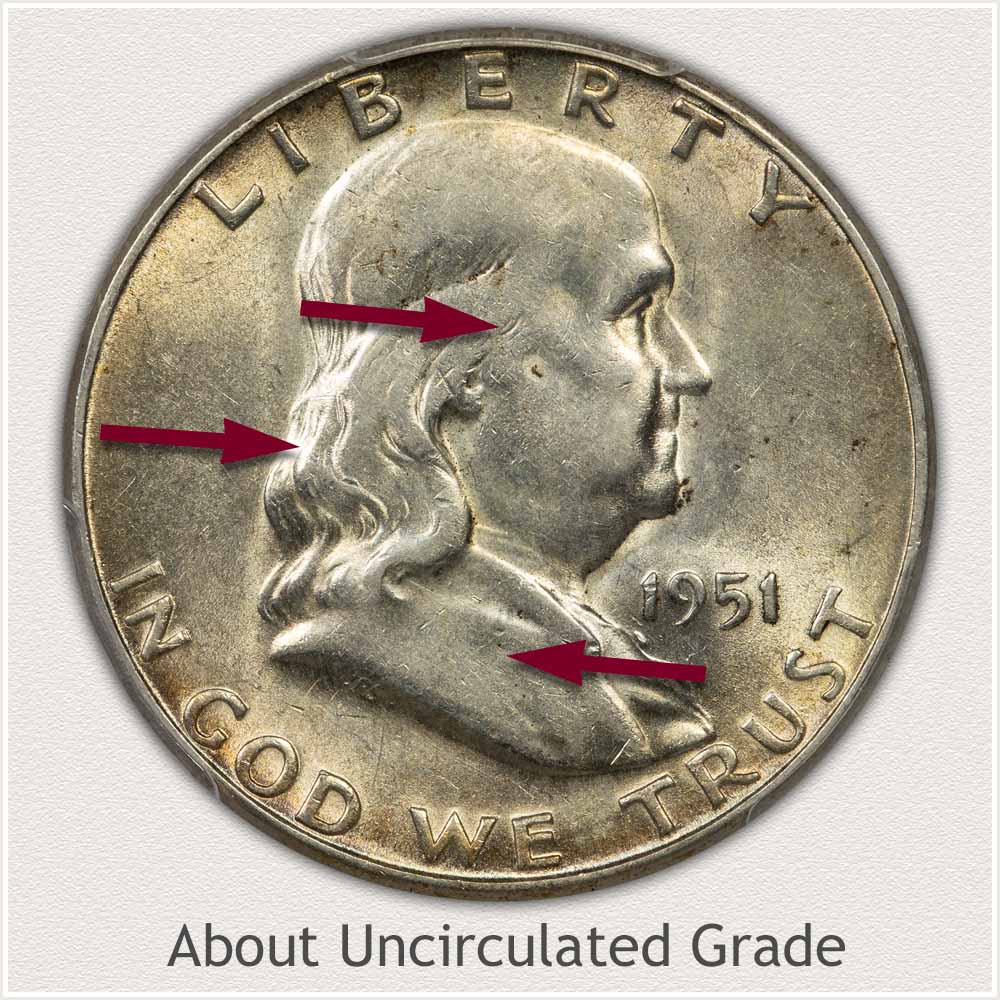 About Uncirculated: Trace amounts of wear indicate the "about uncirculated" grade. Very slight wear is the important definition. The majority of luster is present.

Examine the high relief areas of the coin. Trace amounts of luster is removed. A slight color change to a darker shade of silver on the high points of Franklin's cheek, and hair behind the ear are indicating wear.

Note the "shine" of the coin remains, however, when tilted under a light is missing on open areas of Franklin's cheek. 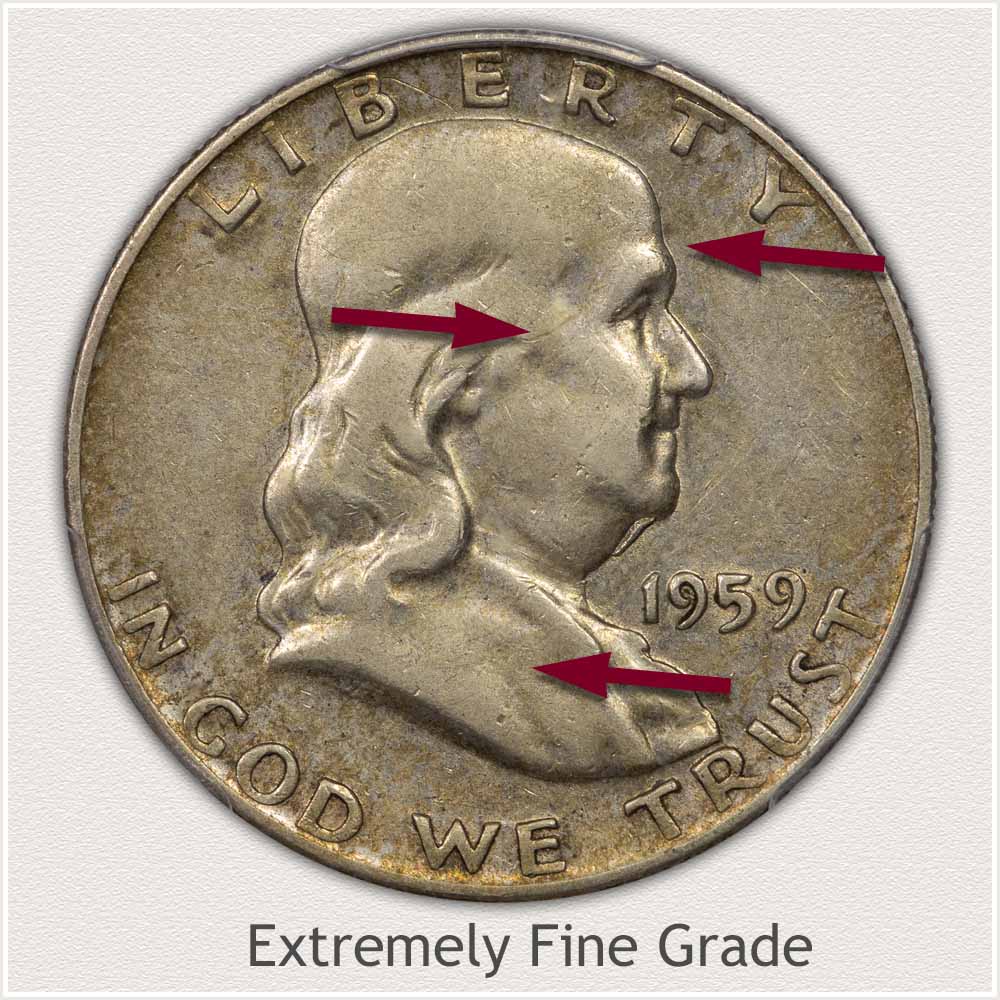 Extremely Fine Grade: Wear has removed the majority of mint luster and created small flattened areas on high relief areas of the design. Light wear is the important factor to the extremely fine grade.

Franklin halves with a light grey toning overall and crisp remaining detail are eye pleasing. Wear is even on the coin, Franklin's eyebrow is bold and rounded, his cheek and jaw are just slightly flattened. Tilt the coin back and forth and note the contour of the cheek and jaw remains, the metal is just smooth and reflective. 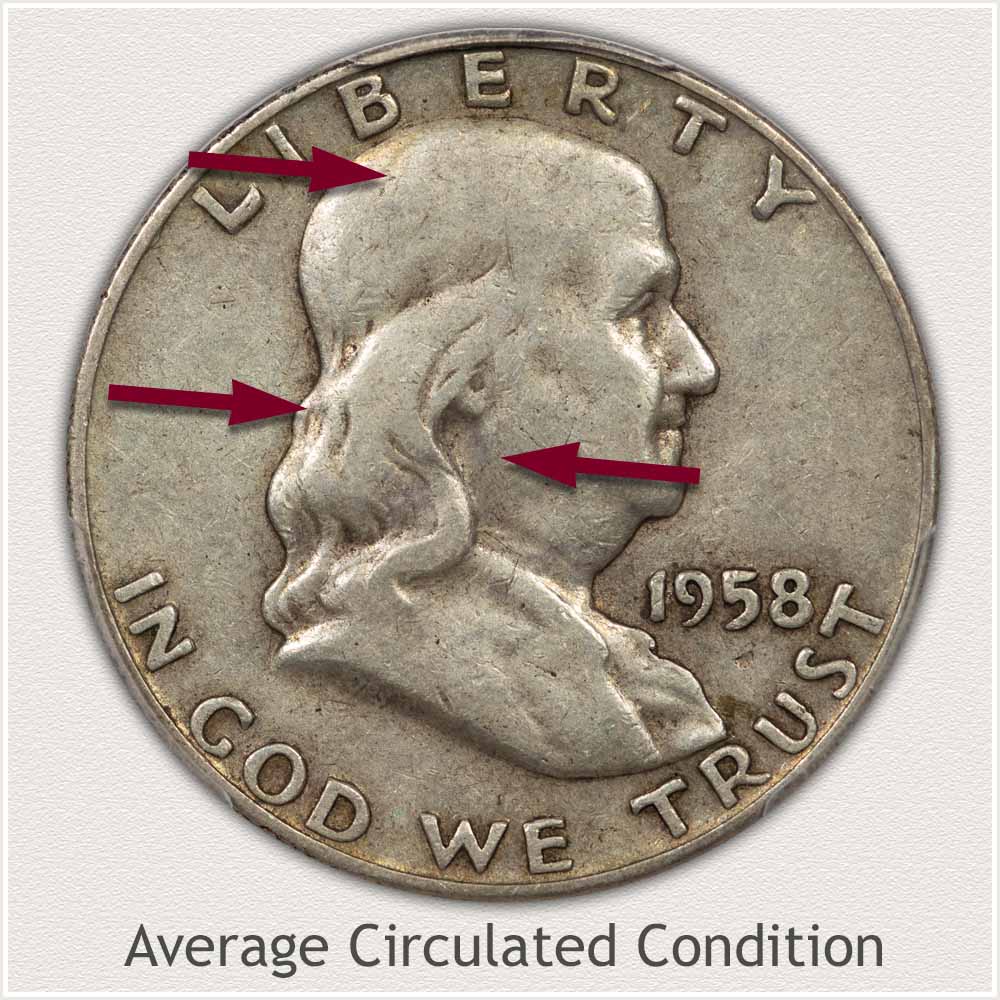 Average Circulated Condition: Once a 1954 Franklin half shows prominent wear it is termed "average circulated" condition. Wear has noticeably leveled high areas and many elements of the design are merging.

The top of Franklin's head is without any hair detail becoming an open smooth area. Large waves of hair behind Franklin's ear are smooth and flat. Originally separate waves of hair flowing behind the ear, now have become merged. Notice the continuous flat plane in the wave of hair extending from above the ear and connecting to the shoulder.

Once the crisp and sharp details have worn, a coin falls below the extremely fine grade and 1954 half dollars are grouped and termed as average circulated condition.

Mint state grade is the bold dividing line in 1954 Franklin half dollar value. Video and detailed descriptions are helpful in deciding the grade. Subtle details are needed to recognize and separate the slightly worn from mint state examples.

There are a few historical facts about the 1954 San Francisco issue Franklin half setting it apart from the series. During its on and off production and in the early years of the series only, the San Francisco mint produced halves as needed to satisfy commerce. Of note to collectors; 1954 became the "Last San Francisco Year" within the span of the design. By 1955 all coinage operations at San Francisco ceased turning its attention to assaying metals. Remaining years of the Franklin series - 1955 to 1963 was supplied by the Philadelphia and Denver mints. 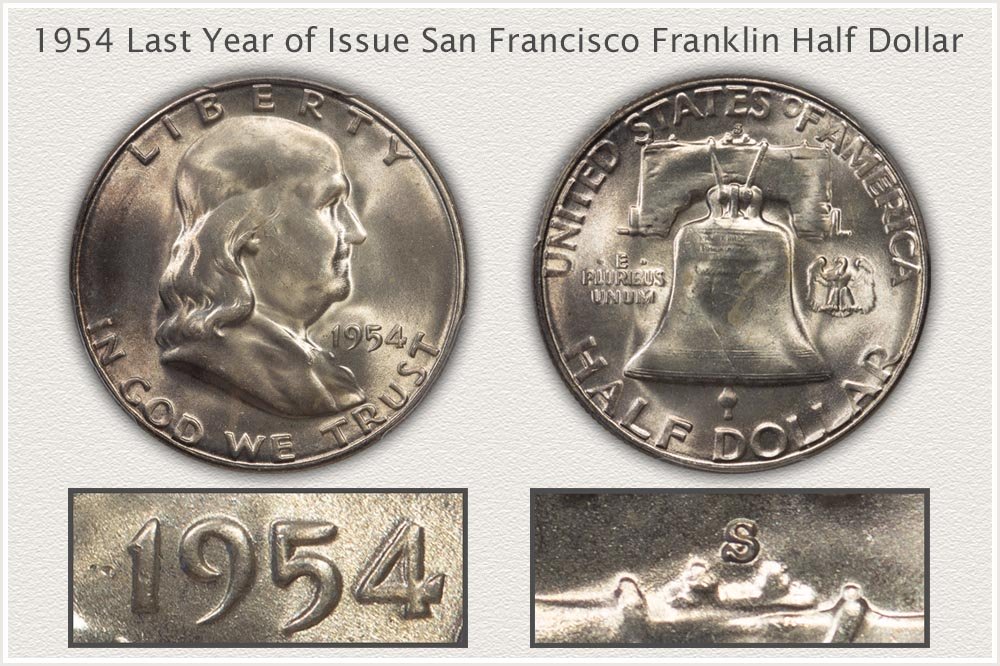 With the special qualities of "Last Year" and historicistically low mintage numbers within the Franklin series, San Francisco 1954 half dollars are a special issue.

Two large markets exist for these coins. Firstly; silver value is a strong base; each is heavy with silver - 90% by weight. All are worth well over their initial fifty cent face value. Additionally, this silver premium has moved higher over the decades since completion of the series.

Second is the collectible market. With the status of low mintages and ending of production; San Francisco mint issues are of interest to collectors insuring demand. High condition pieces are attracting nice premiums adding to a strong base silver value.

A special year, a last of mint issue, and low mintages are combining to create special qualities unique to 1954 San Francisco Franklin half dollars.

All are Silver and All Franklin Half Dollar Value is Rising

Silver value is dynamic, rising and falling over time. Franklin half dollars trend with this change. However, there are exceptions, notably certain dates, mintmarks and coins in collectible condition whose value is well above base silver.

Half Dollar Value Spanning All Series

First minted in 1794; half dollars are an important and valuable part of today's coin collecting hobby. Value charts cover series starting with the first Bust and Seated halves, followed with the scarce Barber and popular Walking and Franklin half dollars.

U.S. dimes, quarters, and half dollars minted before 1965 are all 90% silver. These are actively traded well above face value. Calculate current worth and using the resource list find potential buyers.

Begin here to identify your coin values. Images if each U.S. coin series are linked to value charts and grading images. These combined with mintmark details cover the important items needed to find an accurate value of your box of old coins.