1955 Franklin half dollar value is $7.97 for a coin with moderate to heavy wear. Silver content - 90% silver alloy - is supporting this strong base.

True potential of your coin's worth is found by judging its condition accurately. Coin collectors spend a great deal of time judging condition; it is directly tied to value.

An important issue for the Franklin series, each is inspected closely using a step-by-step method.

Wholesale values are listed in the chart above. Use as a range when applying an assessment of what your coins are worth. Grading has the greatest impact on a coin's demand and premium.

Continue to the steps below and confirm date and condition.

Confirm 1955 Half Dollar to Recognize Value

1955 is a year only one mint, Philadelphia struck half dollars. This fact alone gives your coin a certain appeal as a collectible.

With one listing on the value chart for 1955, it is important to confirm the exact date of the Franklin half. 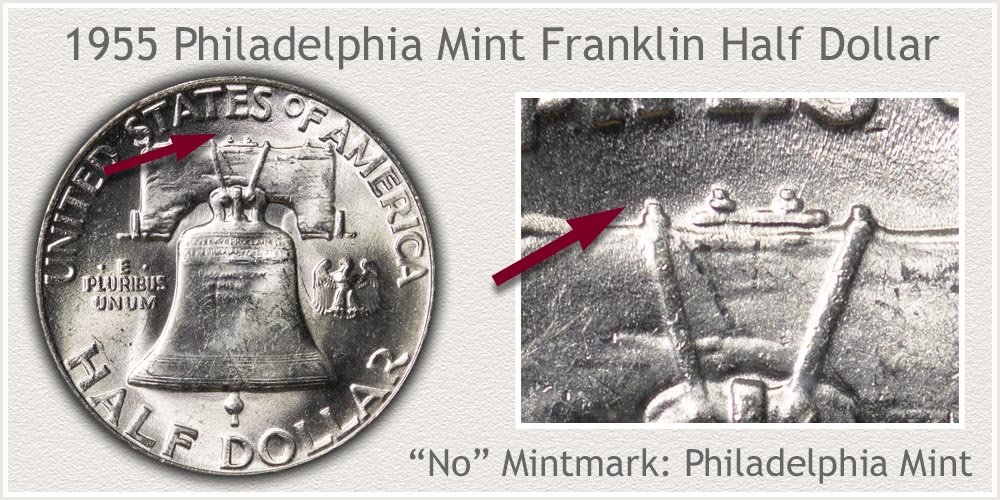 An important date in the Franklin half series, 1955 is the lowest mintage year. Just under 2.5 million of the coins were minted at the Philadelphia mint. The other two mints; Denver and San Francisco did not produce half dollars in the year.

Heavily worn examples regularly trade based on silver value. Today's collectors however place premiums on better condition examples. The "lowest mintage year" allure guarantees a demand for the date. Collectors have only this one low mintage coin to represent as their 1955 half dollar.

Two items to confirm. First - the date, 1955 is very similar at first glance to the 1953 date. Secondly, always look to the reverse for absence of a mintmark. Philadelphia, the only mint striking these coins did not use mintmarks at the time.

Inspect the reverse, just under E in STATES, if the area is empty, it confirms Philadelphia struck the coin. Completing an accurate identity of the 1955 half dollar.

Step 2: | Judge Condition to Identify Grade and Premium Half Dollar

1955 Franklin Half Dollar Value is Conditional

1955 halves are studied closely by collectors. The effort is made to determine if the coin is valued higher than its underlining bullion price. Subtle details are judged to determine a grade. Grading condition is done by comparing to examples of coins representing the different grades. A close match is found by examining surface qualities and noting the condition of the metal.

Slightly worn pieces, if enough detail remains, become desirable to collectors and worth a small premium. 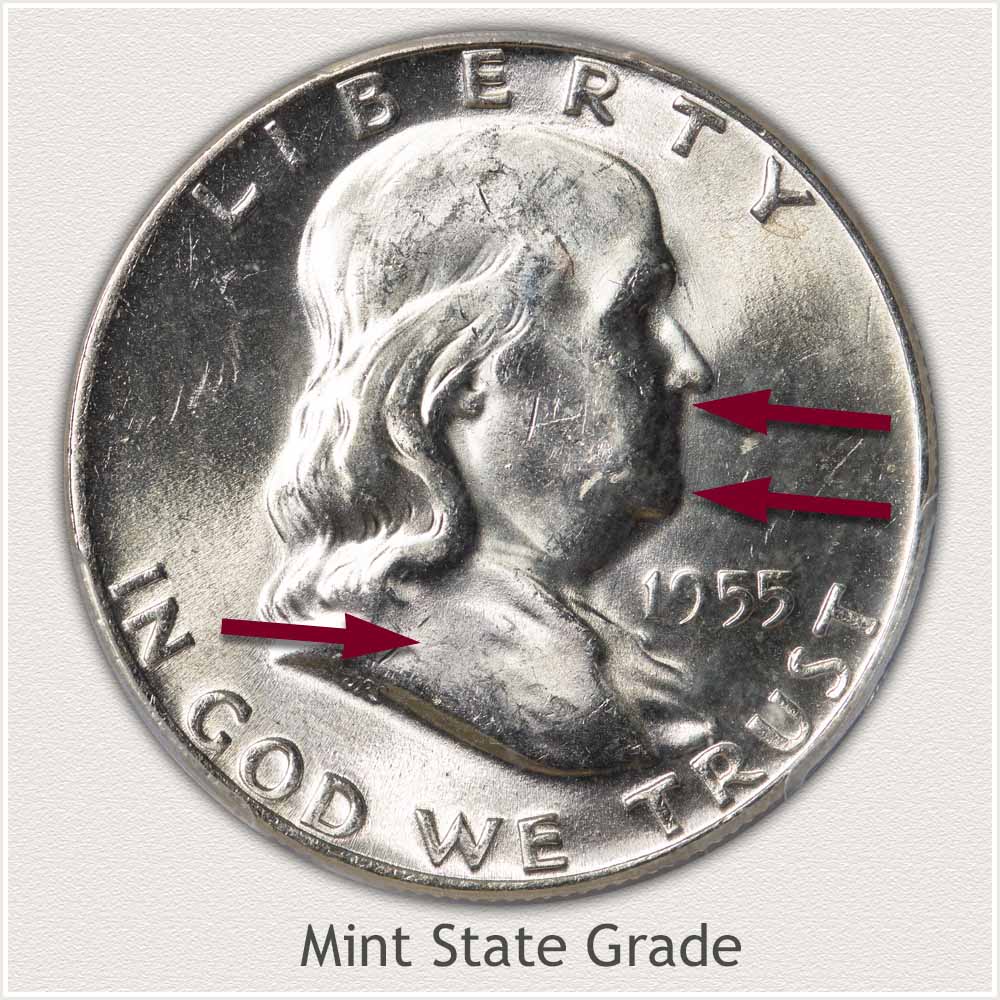 Mint State: Representing the highest 1955 Franklin half dollar value, "mint state" condition describes a coin with no wear to the surface.

Mint State is one of the hardest of all grades to detect since only the slightest traces of wear exclude a coin. If you have a magnifying glass handy inspect Franklin's cheek and chin. What needs to remain is the texture of luster (shine) on the high points. Cheek and chin, matches the shine and texture of surrounding lower relief areas on mint state coins. Wear renders these high points smooth and with a slight color difference. 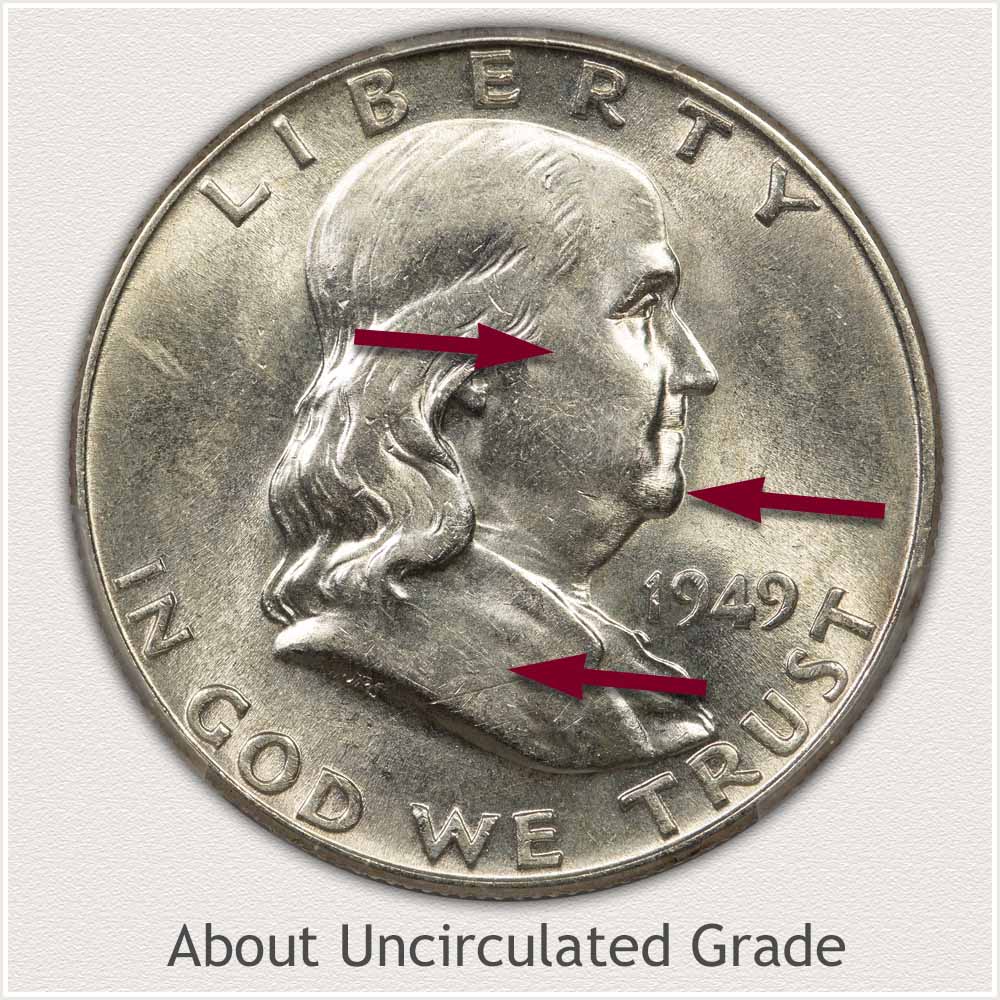 About Uncirculated: When a slight amount of wear is present on the surface, a coin is graded "about uncirculated." To qualify for this grade your coin must exhibit the majority of mint luster as a starting point. This luster is the original surface of the coin when first minted, and is the first to wear as the coin is used and handled.

With luster largely intact, only trace amounts of wear confined to the very tops of the high parts of the design are acceptable.

An excellent area to judge for signs of wear is the cheek and chin of Franklin. Tilt your coin under a light, if wear is present a slight dulling of the shine is found on small areas of the high points to Franklin's cheek and chin. 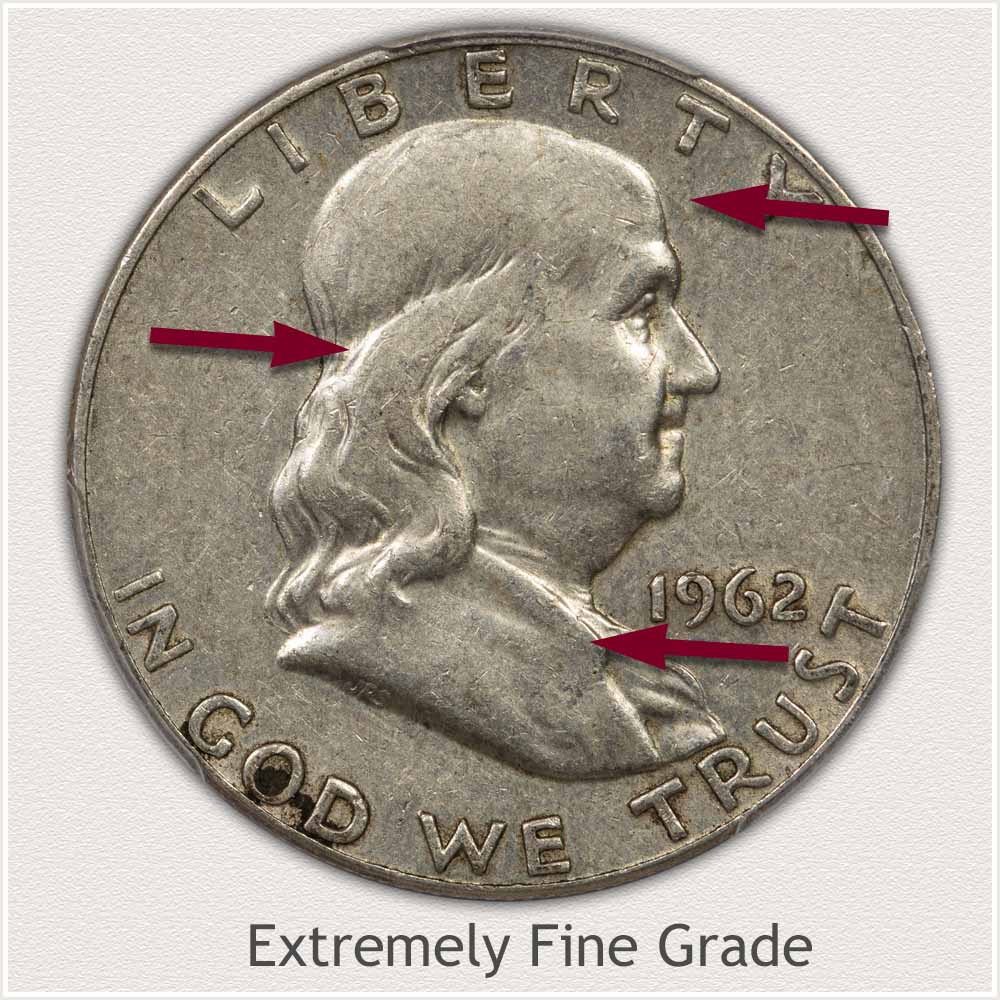 Extremely Fine Grade: In the "extremely fine" grade wear has removed all mint luster, your coin is a nice light silver grey. The important aspect of this grade; wear is obvious; however. the fine details are still present.

Focus your attention on the large wave of hair behind Franklin's ear. The texture of the metal is smooth and an area of flatness is seen. Helping place the coin in the Extremely Fine grade is the inner strands of hair to the wave are well worn, but remain just visible. Overall, a nice, sharply detailed coin. 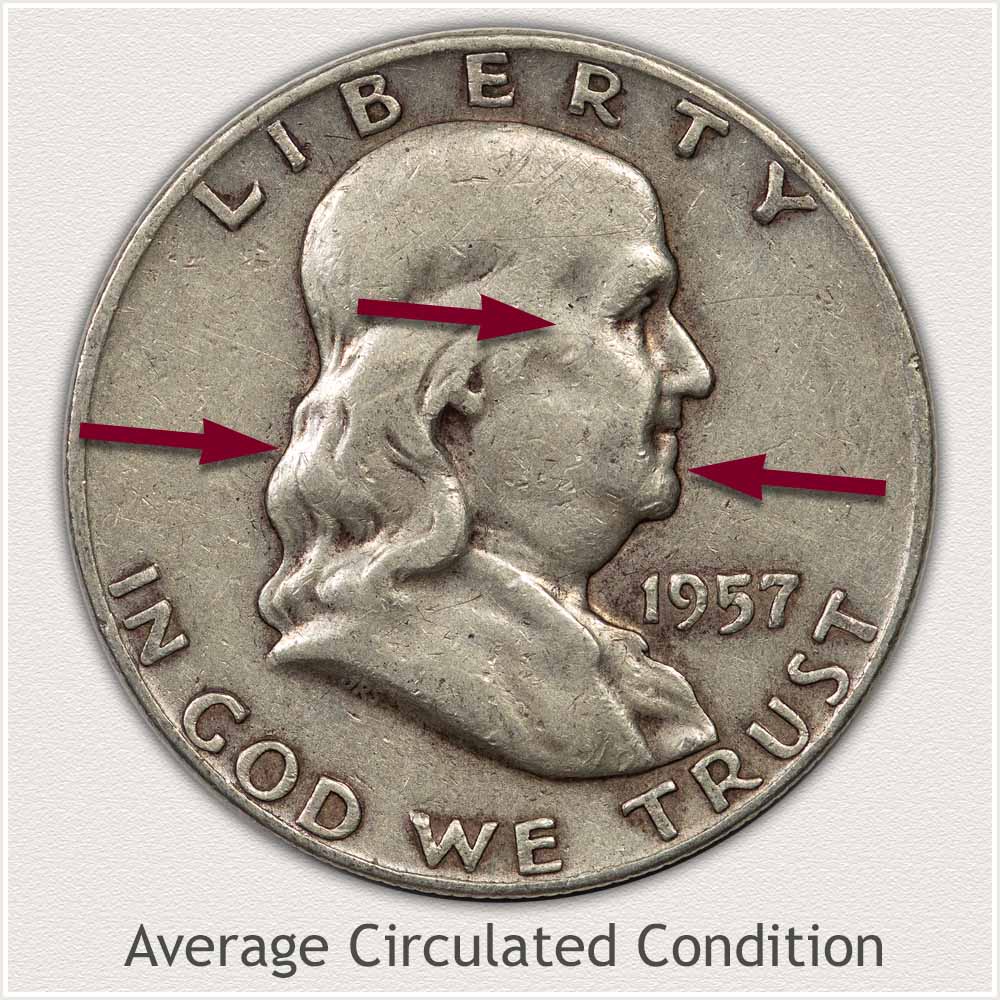 Average Circulated Condition: Once wear has removed the fine details of the design, condition falls below Extremely Fine grade. These moderate to heavily worn half dollars are termed as "average circulated" condition.

When compared to higher grade pieces, average circulated coins are visibility worn and lack sharp details. Franklin's cheek and chin are noticeably worn with flat areas on once rounded contours.

Additionally, the amount of wear on the large wave of hair behind the ear is causing a very large flat area, lacking fine inner details. Blending of hair details near the shoulder is confirming the average circulated condition.

Grading the condition of subtle points and using video and close-up images adds to "seeing" a narrow range of condition and values.

1955 Franklin half dollars have a strong historical element to its special quality, lowest mintage variety of the entire series. With just 2.4 million struck, it is well below the next higher mintage of the 1948 Philadelphia issue at 3 million coined.

A strong second quality is 1955 halves were minted at the Philadelphia mint only. To represent the 1955 date of the series only one variety is available.

Viewing the value chart with a focus on the mint state grade, values indicate many of the 1955 mintage was saved at the time before entering circulation. These coins today are not overly expensive. Advanced collections of Franklin halves obtain high quality pieces without a high cost.

The value chart is also indicating few were saved once entering circulation. Premiums in the lightly circulated grades point to the majority of 1955 halves entering circulation, stayed and became moderately to heavily worn. Here is where the true scarcity of "lowest mintage" begins to show on value charts. Demand for nice, eye pleasing 1955 half dollars just below the premium mint state grade is strong compared to supply. 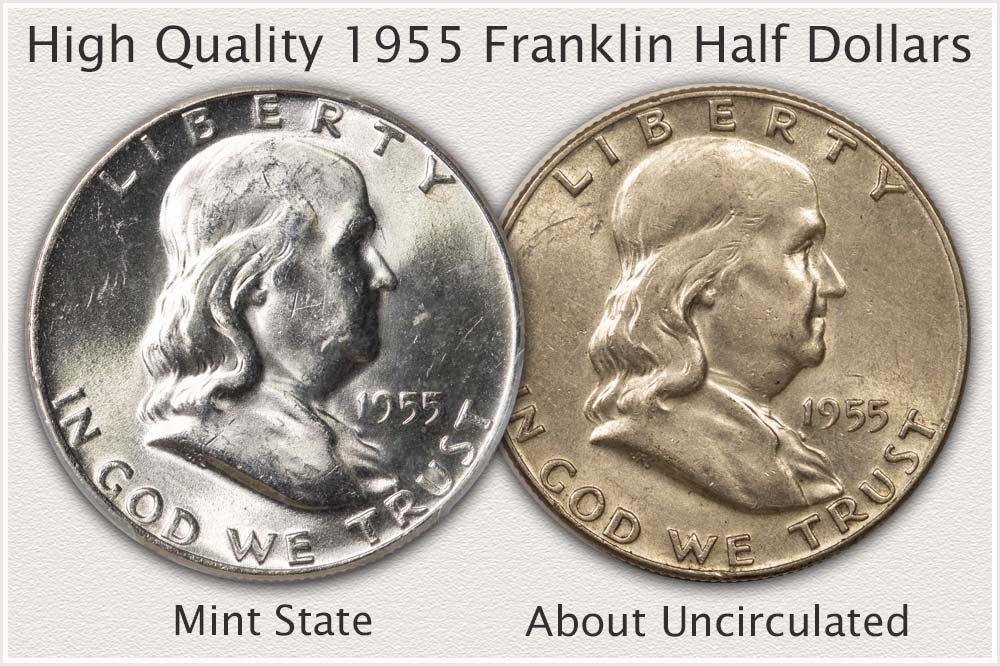 All 1955 halves are special; they are the "lowest mintage of series." Additionally, they have become a challenge to find in pleasing collector grades. All have a strong base in silver value, each is a 90% silver alloy. Examine these special coins closely.

Full listing of all dates and mints of Franklin half dollars. Your 1955 half dollar is one of just a few worth above silver bullion value.

Half Dollar Value Charts of All Series

All old U.S. coin values. Follow image and text links to identify all series of coins from cents to gold. Determine date and mintmark and importantly use grading images to judge condition. Value charts discover how much your box of old coins are worth.