In today's market 1961 Franklin half dollar value is tied closely to its silver price, currently they are worth $7.97 each for worn bullion quality examples. As a collectible, a premium has developed for those in better than average condition.

Finding the higher value half dollar requires identifying those in "mint state" condition. A step-by-step method judges condition comparing to images. Grading in Step 2 below quickly separates the bullion quality from collector quality.

Wholesale values are listed in the above chart. Use as a guide helping determine your selling range to a dealer.

Steps are outlined to identify, define; both date and mint combination and also judge condition. Compare your coin to the images as you move through the process.

Two Mint Issues of 1961 Half Dollar to Identify

Two mints produced 1961 Franklin half dollars, Philadelphia and the Denver mint. Collectors in their quest for a complete set of the Franklin series include both mints.

Branch mints, in this case Denver, placed a small mintmark on the reverse and is used to identify its coinage. All dealers and collectors evaluate each date and mint combination separately when placing a value on these old half dollars.

When studied closely each mint has its own subtle qualities. Large quantities of 1961 halves were produced, over 28 million. Amount these coins, qualities of strike and surface appearance varies adding to an assessment. An accurate evaluation and listing on the chart starts with the exact date and mint striking the coin. 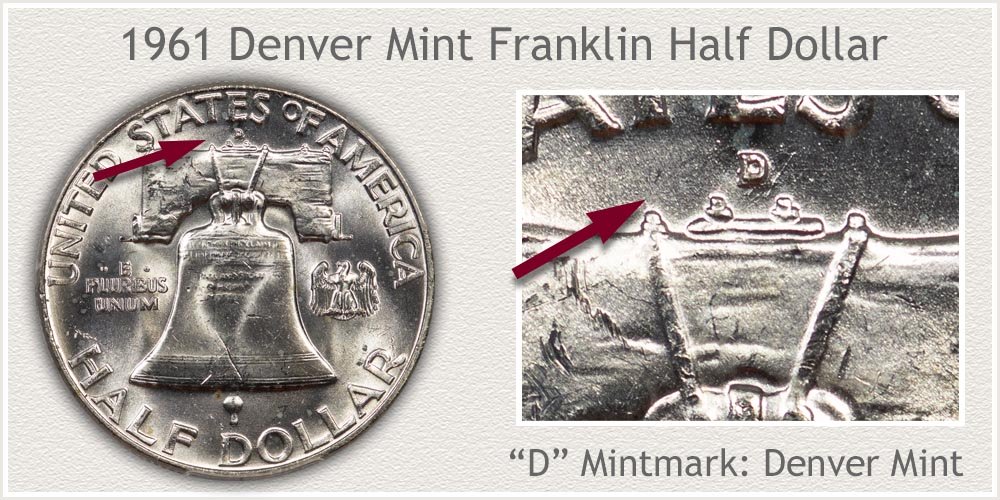 Denver variety Franklin halves of 1961 are an abundant half dollar today. A substantial 20.2 million were produced and many were saved in all conditions. Those that circulated and became worn are traded based on the value of their silver content.

Franklin halves are all a 90% silver coin and worth well above face value of 50 cents. In collector quality (those without wear to the surface) ample supplies are available. Collectors seek the high condition coins and the market enjoys a premium above silver worth.

Collected by date and mint combination, identify the Denver variety by the "D" mintmark found on the reverse. Just above the Liberty Bell, if a "D" is visible the Denver mint produced the coin. 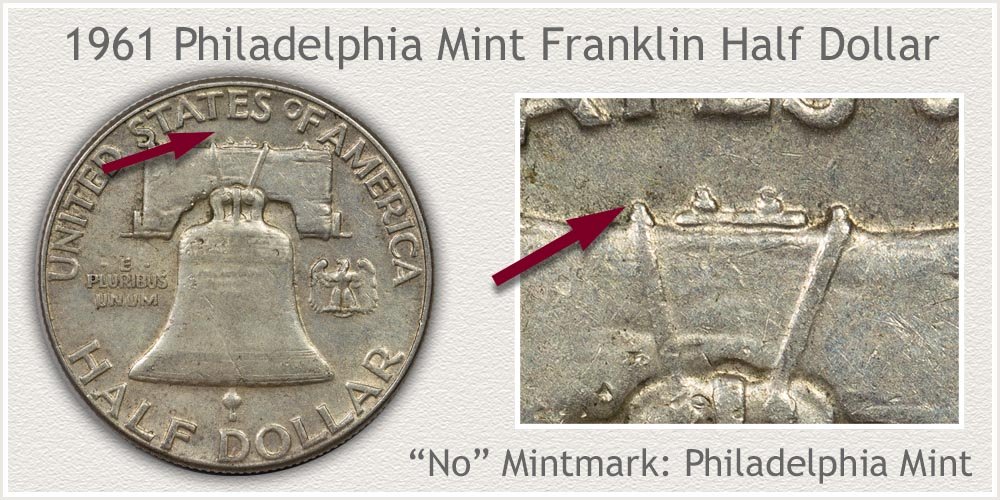 The Philadelphia mint is notable as the only mint striking Franklin half dollars every year of the series. A complete "date run" is possible of the Philadelphia variety and is a popular collecting theme.

Philadelphia issues are affordable to all collectors, the original mintage of 8.2 million provides ample quantities available today. Condition of the coin is the deciding factor to values above base silver value. Grading the surfaces and recognizing high condition examples is covered in Step 2 below.

Franklin half dollars produced at the Philadelphia mint are identified by the absence of a mintmark. During the series, Philadelphia did not place mintmarks on its production. On the reverse, look above the Liberty Bell just under "E" in STATES. No mintmark in the area confirms the Philadelphia variety.

Step 2: | Judge Condition by Comparing to Images of Grades

All Franklin half dollars are 90% silver by content. Heavy with silver gives these coins a strong base to value. Grading their condition looks for the well-preserved pieces sought by collectors with an added premium.

Grading is a process of inspecting the surface of the coin, first looking for signs of wear and the extent of wear. Detecting a coin without any wear meets a requirement to higher quality and collectible status.

Images are used to compare surface condition of your coin to examples of the different grades. 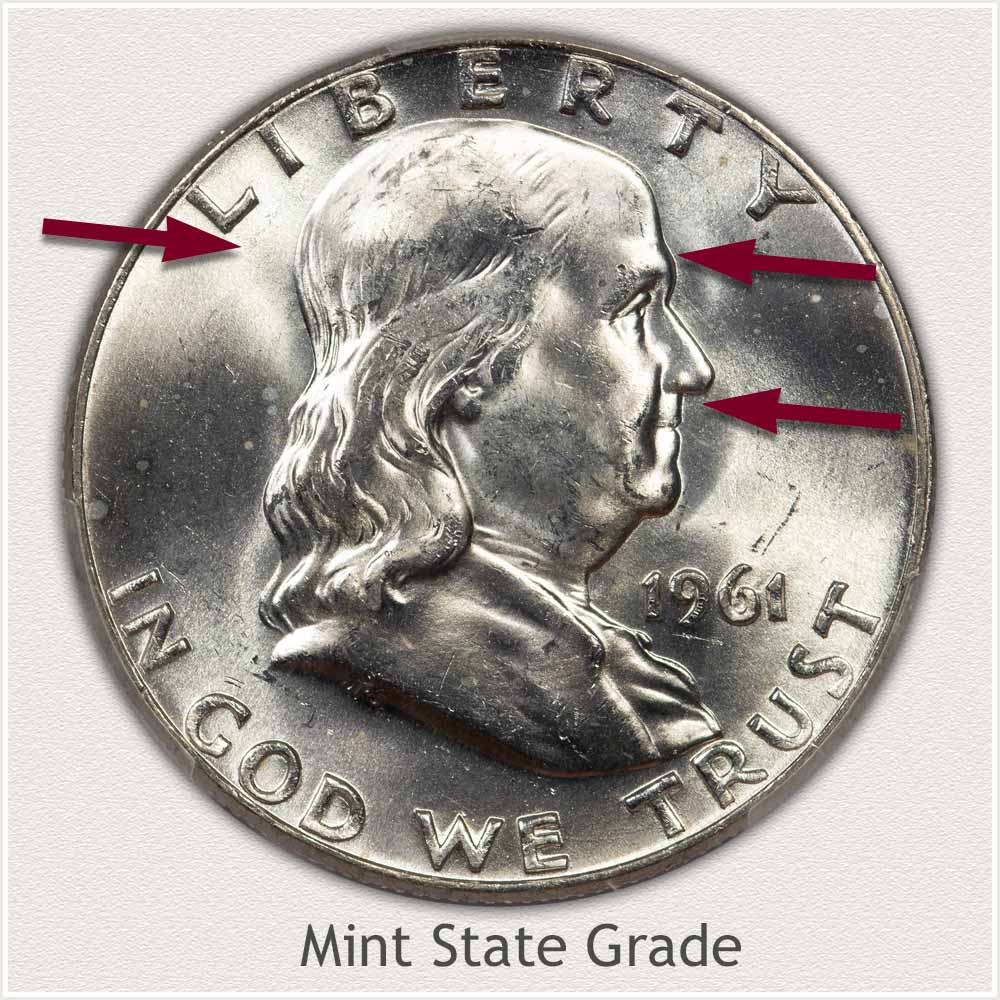 Key to the grade is inspecting the mint luster looking for any breaks, these indicate the half dollar saw use and developed wear to the surface. This mint luster is the fine texture imparted to a coin at the time if striking. Fine grains of metal radiate out from the center giving the coin its distinctive "new" look. If any wear is present, luster becomes a dull silver grey.

First to show the effects of wear are the high points, notably Franklin's cheek and eyebrow. Tilt the coin under a light, inspect both the low areas of contours with high areas. If both high and low points are similar in texture and shine the surface is complete luster and no wear. 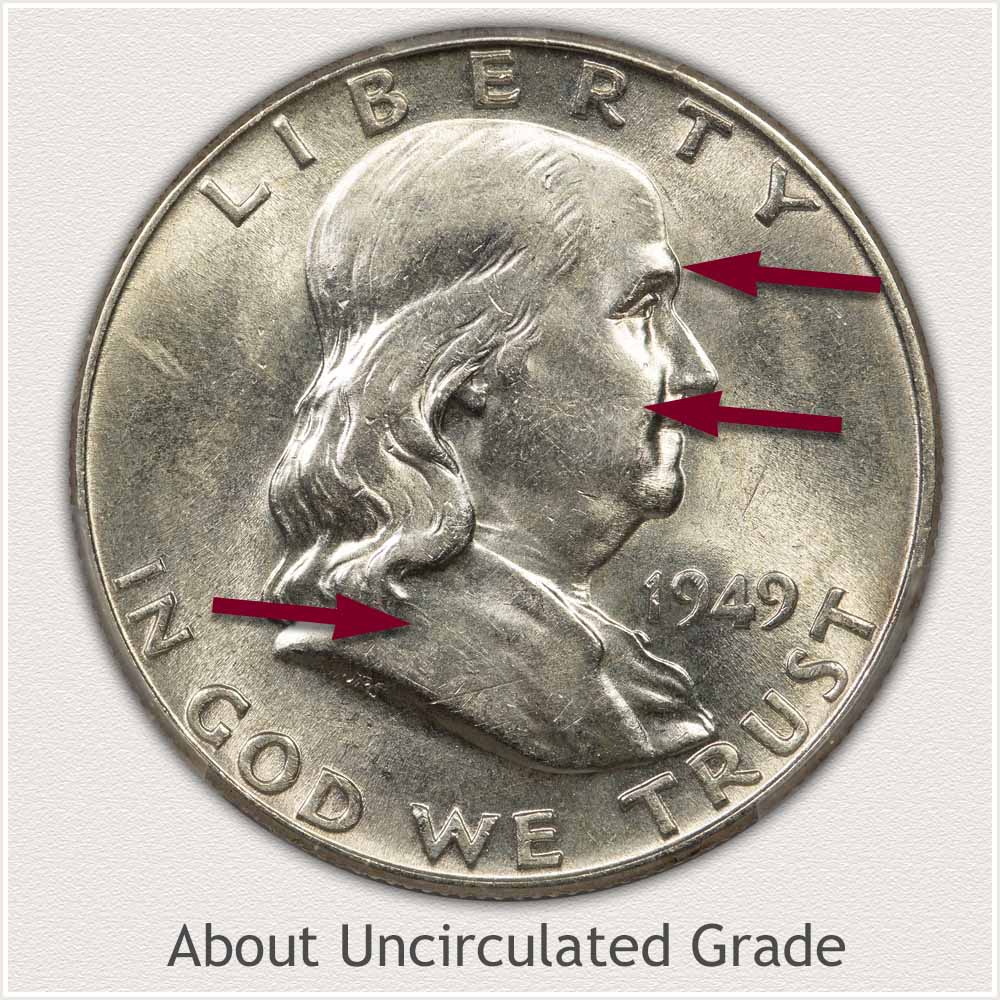 About Uncirculated: Compare the image of this "about uncirculated" condition half dollar closely with its uncirculated counterpart above. Bullion value and higher collector value separates the two. A big difference in 1961 Franklin half dollar value hangs on the judgment call.

Many coins at first glance have the appearance of mint state. However, even a slight amount of wear disqualifies a coin from the sought-after quality grade. Tilt your coin to the side so the light hits it an angle.

Focus in on Franklin's cheek; allowing the light to play off the surface, an "about uncirculated" coin shows a dullness to the surface on the high ridges and just a touch of smoothing of the metal. Additionally, inspect his eyebrow to confirm only a small amount of wear is confined to the highest point. 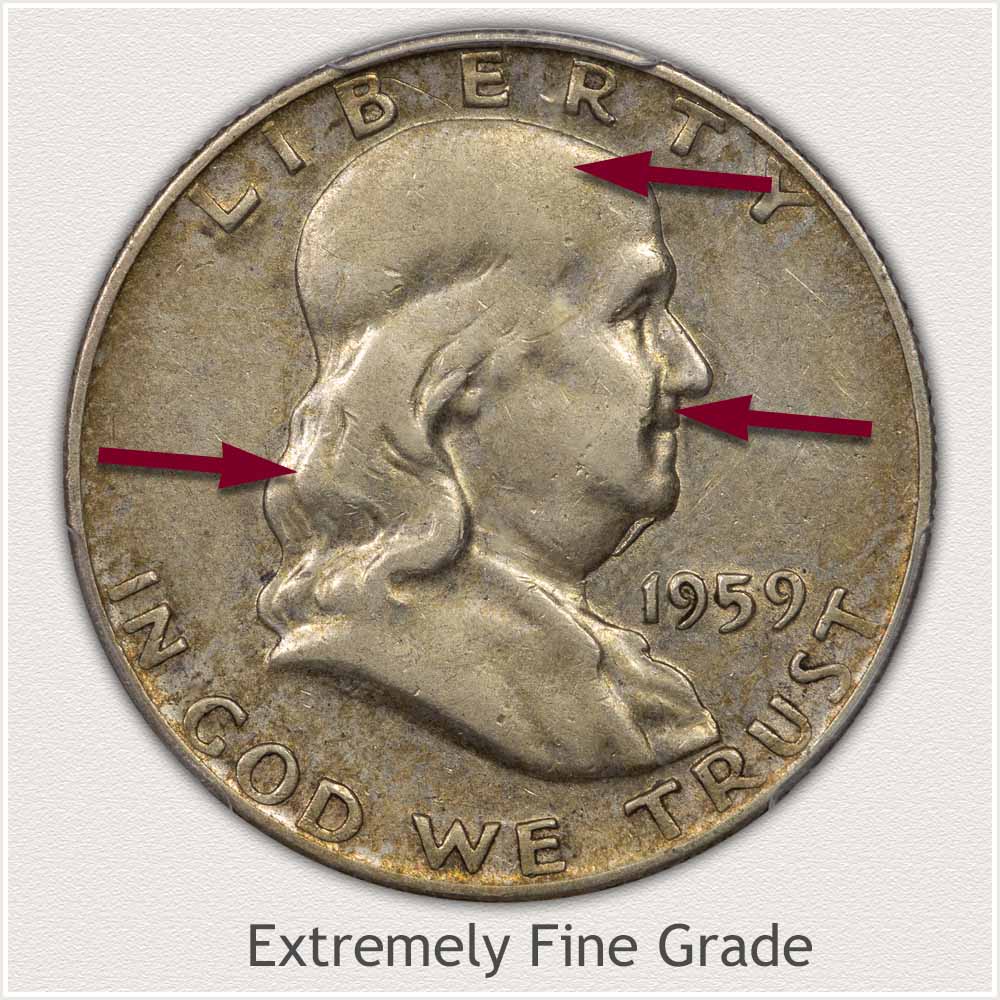 Extremely Fine Grade: As a coin wears all the mint luster is first removed replaced by a silver-grey tone to the metal. If luster is missing and wear is only on the highest points, the coin is considered in the extremely fine grade.

In lightly circulated, extremely fine grade, the waves of hair behind the ear are just beginning to show a small flattening. Notice the waves remain separate with inner strands showing helping qualify the grade. 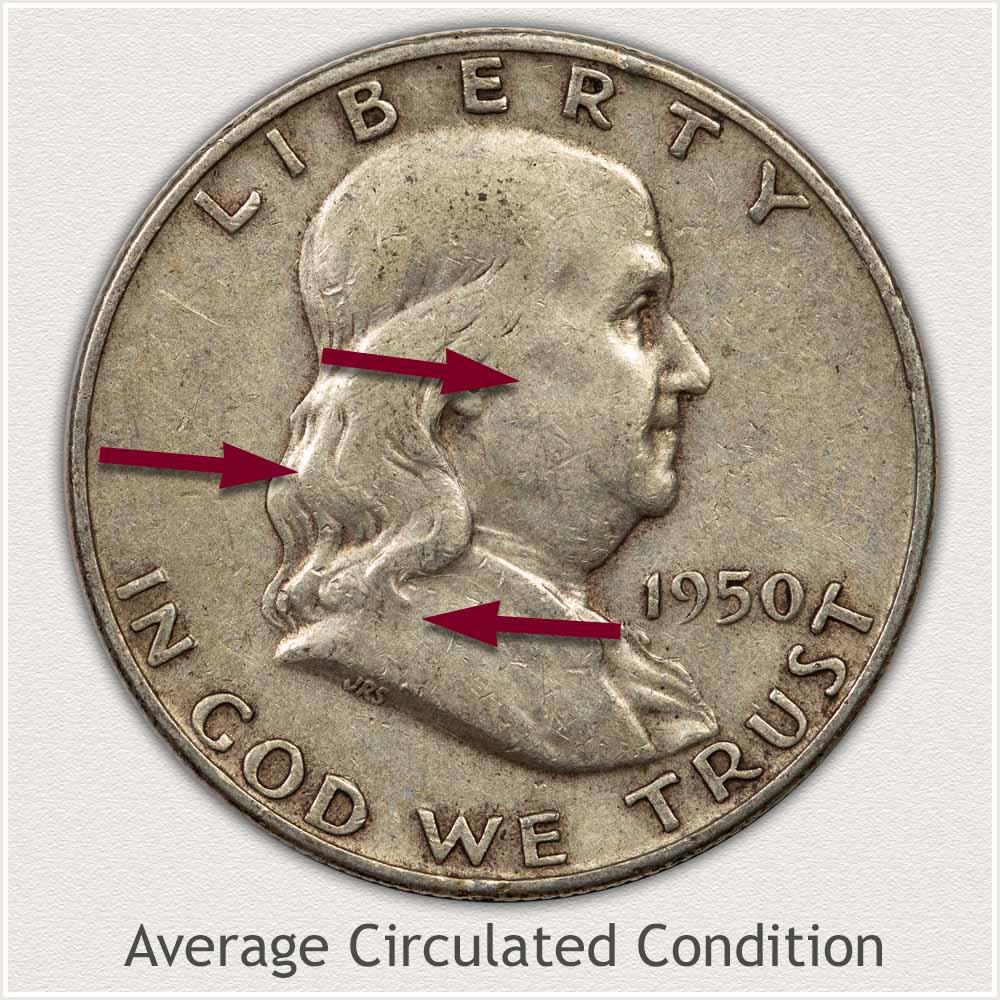 Average Circulated Condition: Franklin halves falling below the Extremely Fine grade are in a category of "average circulated" in terms of placing a value on the coin.

Exhibiting moderate to heavy wear is noted by the large flattened areas covering Franklin's cheek. His jaw line is smooth connecting to the cheek near the mouth. Waves of hair behind the ear are visibly flattened. Lower ends of the hair are blending with the shoulder with no separation detail.

Smoothing of the metal is found over the entire surface of an average circulated condition Franklin half dollar.

In order to safely place a value on your coin it is necessary to judge the subtle difference in condition of preservation. Additional images and video are used specifically of Franklin half dollars.

Recognizing potential to a premium quality and value Franklin half dollar is initially made by the coin's first impression. Additionally, these coins have small subtle details of both the design and surface preservation.

An eye pleasing coin has a tendency to stand out from a distance capturing a full view and upon close examination continues to possess pleasing features. 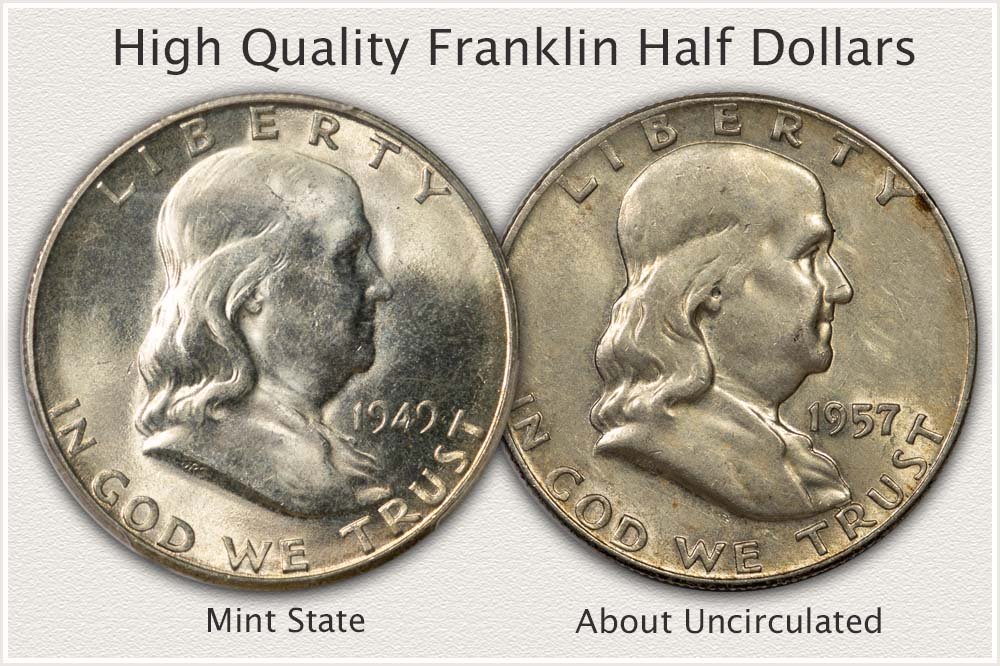 These Franklin halves are both examples of coins with nice looks. The key is remaining luster giving a "freshness" to their appearance. On the left is a fully mint state coin with no wear to the surface displaying complete bright luster. With just the touch of wear, the coin on the right still displays ample luster and character. Premium quality is the impression of both. 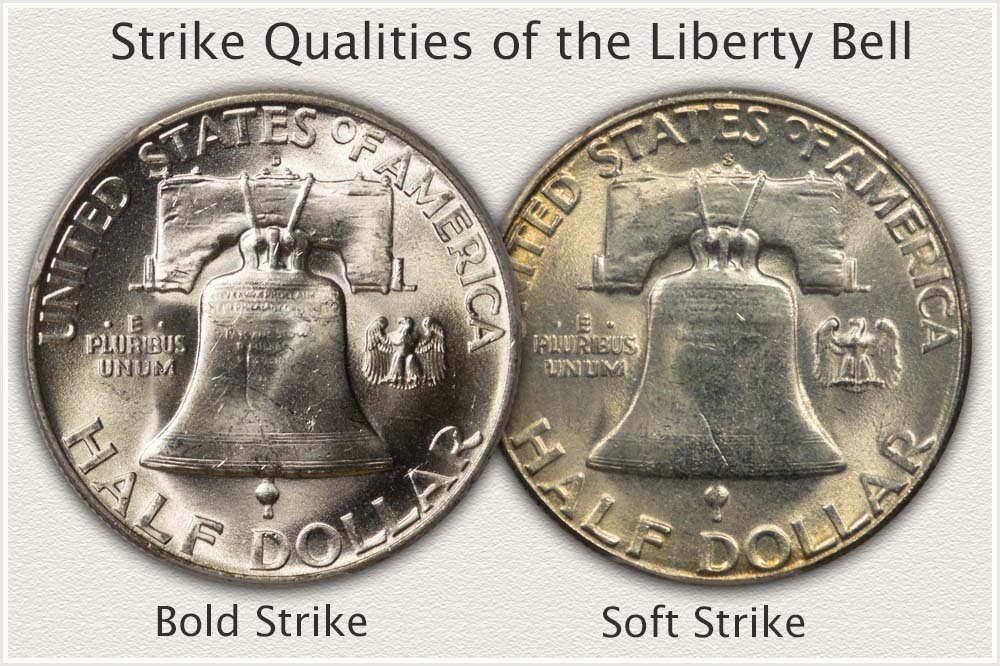 When a closer look is taken of the two examples a distinct difference is quickly seen. Fine details and lettering of the Liberty Bell are boldly raised on the half dollar on the left. Notice the lack of these letters and details on the right hand coin. Both coins are without wear, missing elements of the design were not worn away. A difference in the original striking and imparting of the design is the cause. Fine design elements is preferred and of higher quality. 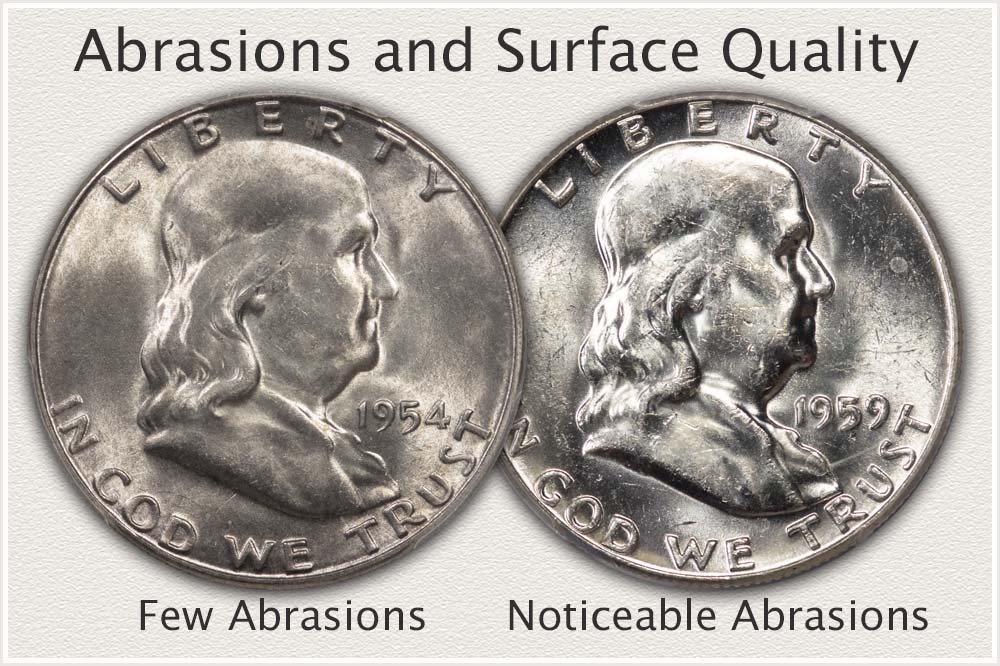 Abrasions to the surface is a factor separating above average quality. Marks happen often to the higher parts of the design and towards the center of the open areas (fields) of the coin. A nice portrait of Franklin is nicely preserved on the eye pleasing example. Looking at the example on the right notice the marks and dings found on areas from the top of Franklin's head to chin. These marks are small but distracting, lowering qualities.

From a distance to close-up, finding a pleasing coin with pleasing surfaces from both views helps confirm a special quality coin.

One last thought, San Francisco coins - the "S" mint mark variety are noted as the low mintage issues of the three mints producing these half dollars. All were made in the beginning of the series. Any San Francisco Franklin half with the above traits - Pleasing Luster | Fine Detail Visible | Mark Free Surfaces is a premium quality and value coin.

Silver value is a dynamic market, moving up or down over time. Franklin half dollar value trends with this change. However, there are exceptions that rise above base silver price, notably certain dates, mintmarks and ones in collectible condition.

Half Dollar Value | Discover all the Rare Dates

Silver U.S. half dollars were first minted in 1794 and continued to 1964. Your 1961 Franklin half is part of this long history. All series of half dollars are imaged to help identify your coins, with links to specific value charts.

U.S. dimes, quarters, and half dollars minted before 1965 are all 90% silver. These are actively traded well above face value. Calculate current worth and using the resource list find potential buyers.

There is value potential with any old U.S. coin. If it seems a little daunting, begin at the home page to first identify your coin. Images on the home page - are linked to the U.S. coin series and value charts. All coins are valued individually; important details such as Mintmarks and Grading Condition are covered in depth. All combined discovers the accurate value in your box of old coins.