1943 nickel value comes with a built-in premium; all contain silver as part of the coin. Silver price has risen greatly since 1943 ensuring these coins are all worth many time their five-cent denomination.

Collector demand for examples in nice circulated and better condition is providing a strong base above silver price. Identify the collector quality, high value coins following a step by step method.

Value of these silver nickels is further based on collector interest. New and beginning collectors find the circulated pieces affordable and base collections on nice examples. Mint state silver nickels are a challenge to advanced collectors.

Determine how your nickel is rated using the steps to date and mintmark combination and condition of the coins. The Denver mint 1943 nickel is a low production year for the mint, a coin worth recognizing.

A popular way to collect is obtaining each mintmark variety of ever date in a coin series. 1943 nickels were struck at three mints, Philadelphia, Denver, and San Francisco. All are close in value; however, the Denver issue is elusive because of low mintage numbers.

All 1943 nickels are the silver alloy variety and each is a premium coin because of today's silver price.

Added value is identifying the mint that struck the coin and continuing to the grading section to judge condition. 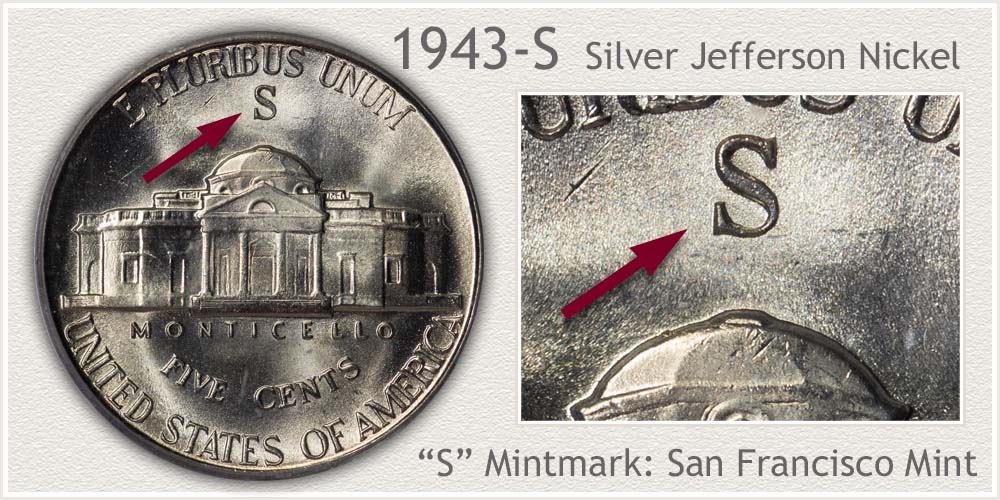 San Francisco mint typically struck fewer coins compared to other mints. However, in 1943 it stuck 104,060,000 silver nickels, a huge amount. 104 million nickels in one year is the largest amount the mint struck during the vintage years of the series.

1943 "S" mintmark nickels are abundant in numbers and premium in value, a nice find. During the "silver" years San Francisco placed a large "S" mintmark above the dome of Monticello. This identifies the mint and confirms a silver nickel. 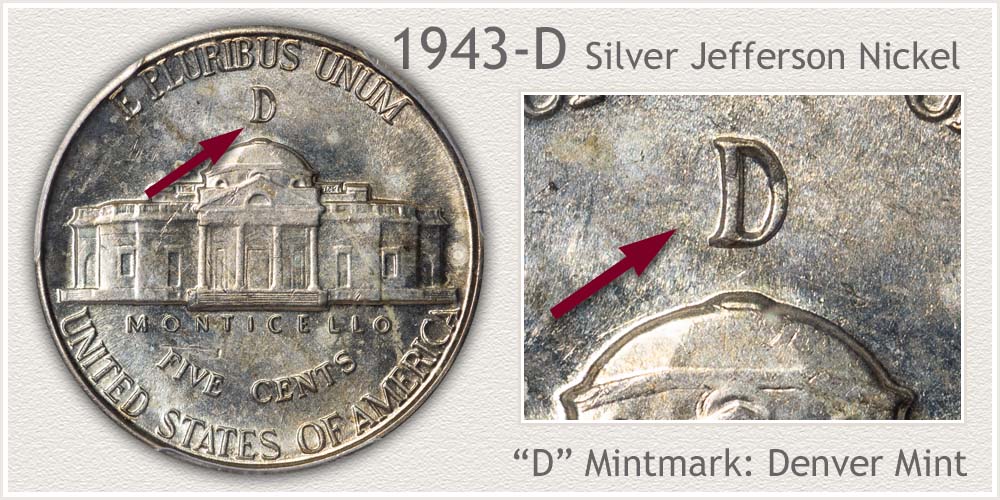 1943 silver nickels from Denver are an elusive issue. With only 15,294,000 produced it is the fewest minted variety of the silver nickel era. Circulated examples with noticeable wear trade based on silver content. Lightly worn or better pieces are the difficult coins to locate with added value. These are a nice collector find in upper condition.

The silver issues all feature large mintmarks above the dome of Monticello. A large "D" on the reverse is the Denver mint coin. A coin when found, worth taking extra care when judging condition. 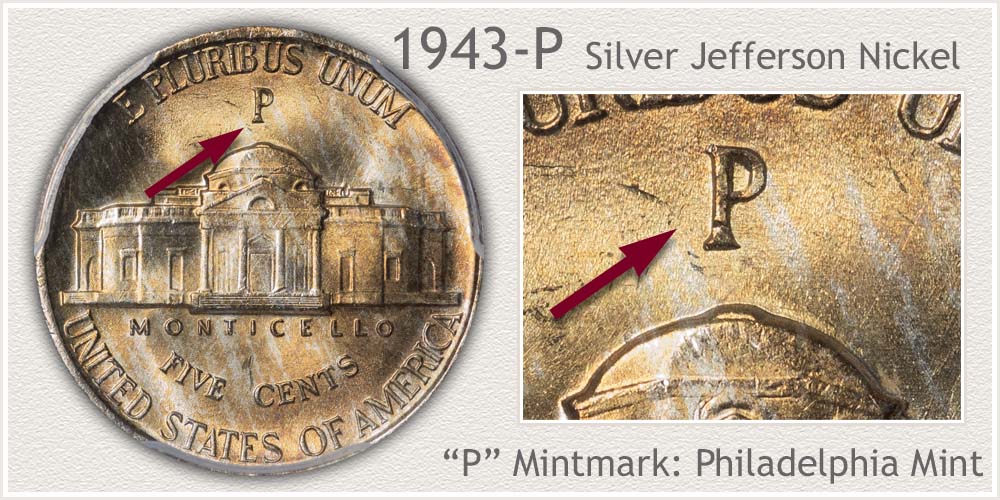 Philadelphia mint contributed over 271 million silver nickels in 1943, far and away the single largest variety of the silver series. Combined with total mintages of the two branch mints, the yearly total places 1943 as the highest silver era year and fifth highest of the vintage Jefferson nickel series. A Philadelphia 1943 nickel is abundant and the likely silver nickel found.

With the need to identify the silver issue nickels, all mints placed a large mintmark above the dome of Monticello. On the reverse of the coin, Philadelphia used a "P" mintmark to indicated its production.

1943 was an abundant year in nickel production. The objective is determining the collectible quality examples with premium value.

Grading is a judgment of the surface qualities of a coin. First is recognizing any wear and then judging the amount of wear. Key areas on the design indicates the different stages of wear and are used to identify a grade.

Use a single light source when viewing, helpful in finding subtle details. Begin by examining the Mint State image of a Jefferson nickel, showing all the original details. 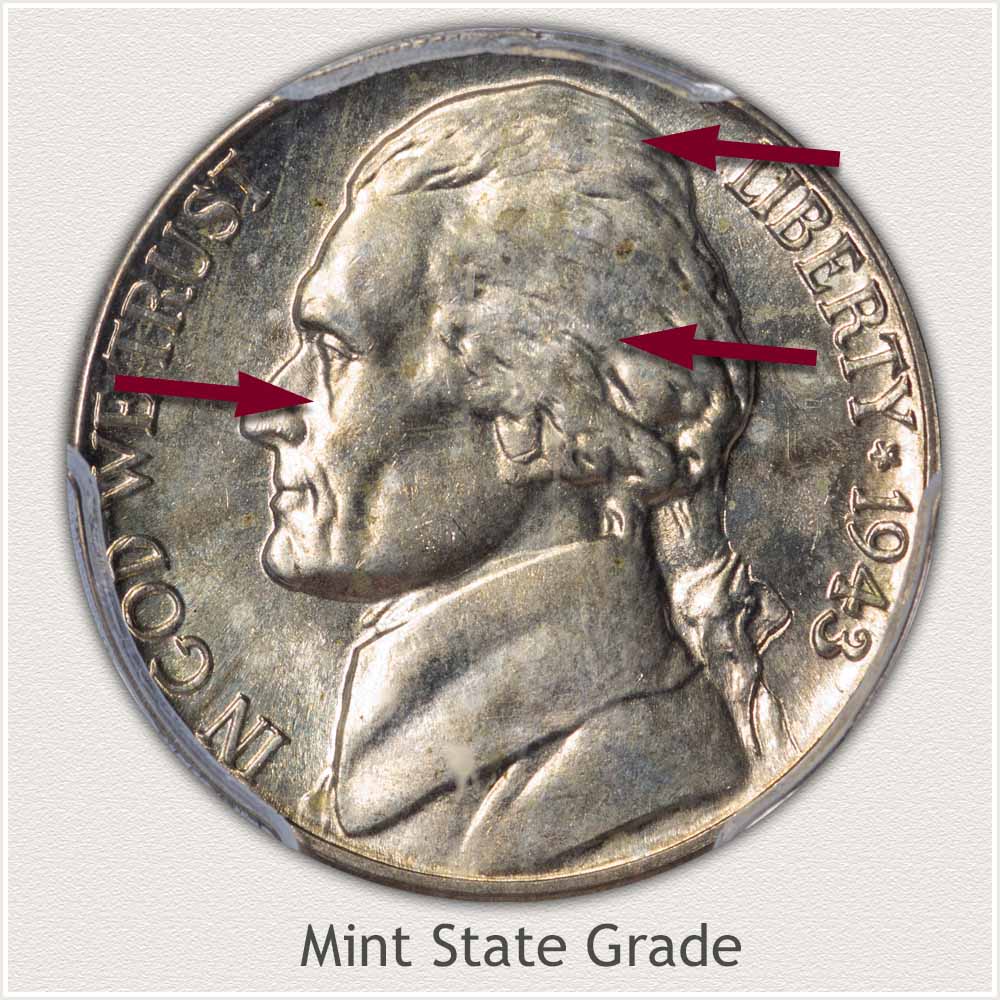 Mint State Grade: All details are present on a Mint State coin. No wear has taken place and the highest points of the design are visible.

Mint luster, the result of the minting process covers the surface of both the tops of contours and the lower field areas. This shine is small texture lines reflecting light.

Inspecting the hair just above and behind Jefferson's ear finds the surface lustrous. Original minting texture along with its shine is intact. Wear has the appearance of smoothness and dullness to the metal. Expand you view to the hair at the top of his head and cheek areas, to confirm no wear and smoothing to the surface. 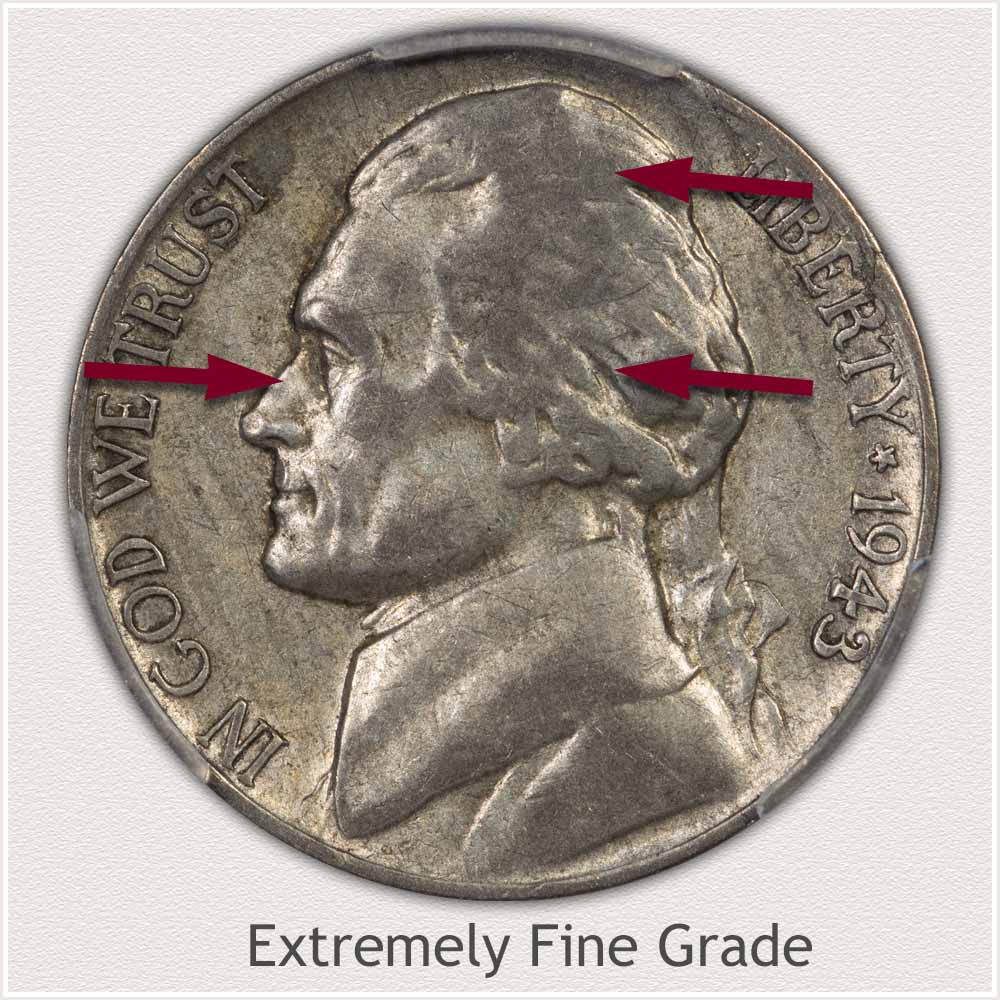 Extremely Fine Grade: Mint luster is lacking on the example nickel. The delicate nature of luster is first to show the presence of wear. Keeping this coin in the Extremely Fine grade is the very light amount of wear limited to just the highest points.

An area high in relief is the hair just above and behind Jefferson's ear. Notice first, the smooth texture and a small flatness to the metal. The hair behind the ear is a raised and contoured design and now showing evidence of smoothing. All wear over the entire design is very light.

From an overview, the extremely fine grade is a coin remaining crisp in detail. 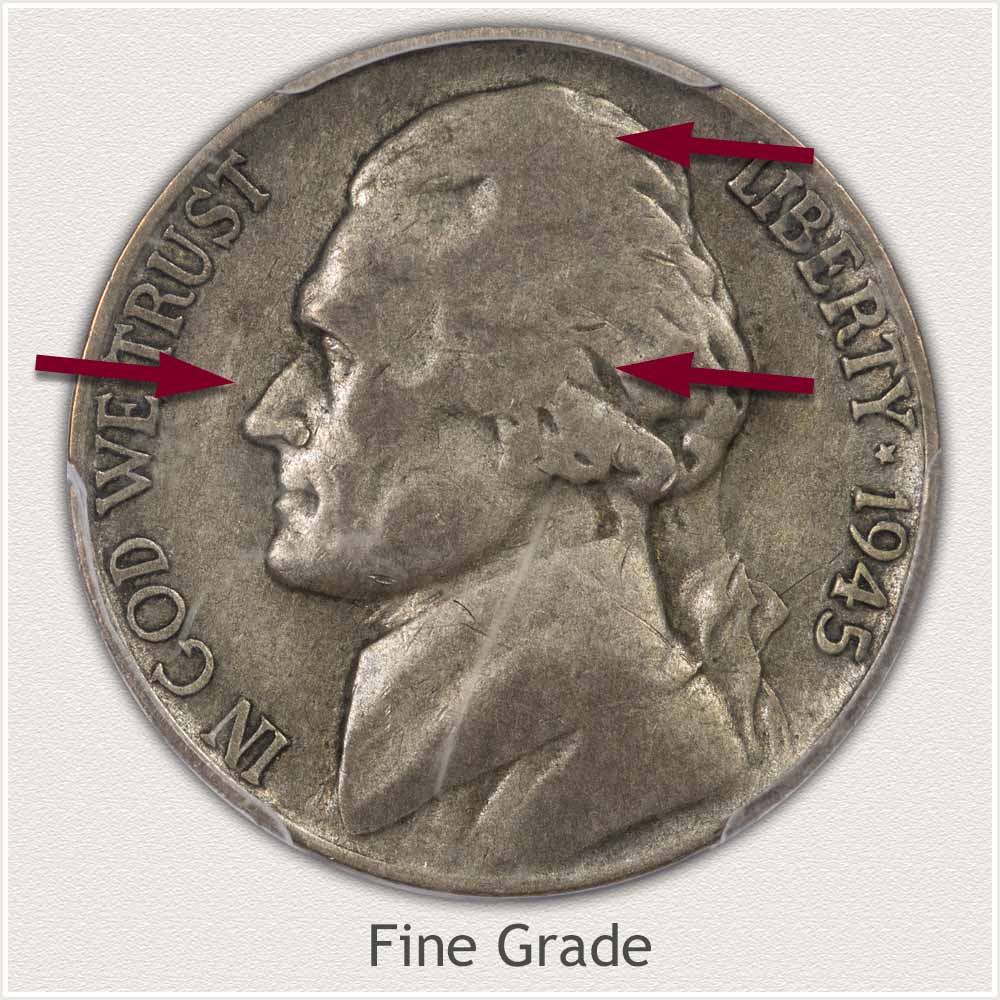 Fine Grade: Moderate flattening of the high areas defines the Fine grade. The condition of the coin is visibly worn and flat areas are noticeable. One distinction is the flat areas are disconnected.

Hair above Jefferson's ear is now a flat spot and the flatness extends to the curl of hair behind the ear. Lacking are small strands of hair detail.

Remaining contours of Jefferson's face give a boldness to the coin. Fine grade nickels are "worn" but not "smooth" in appearance. 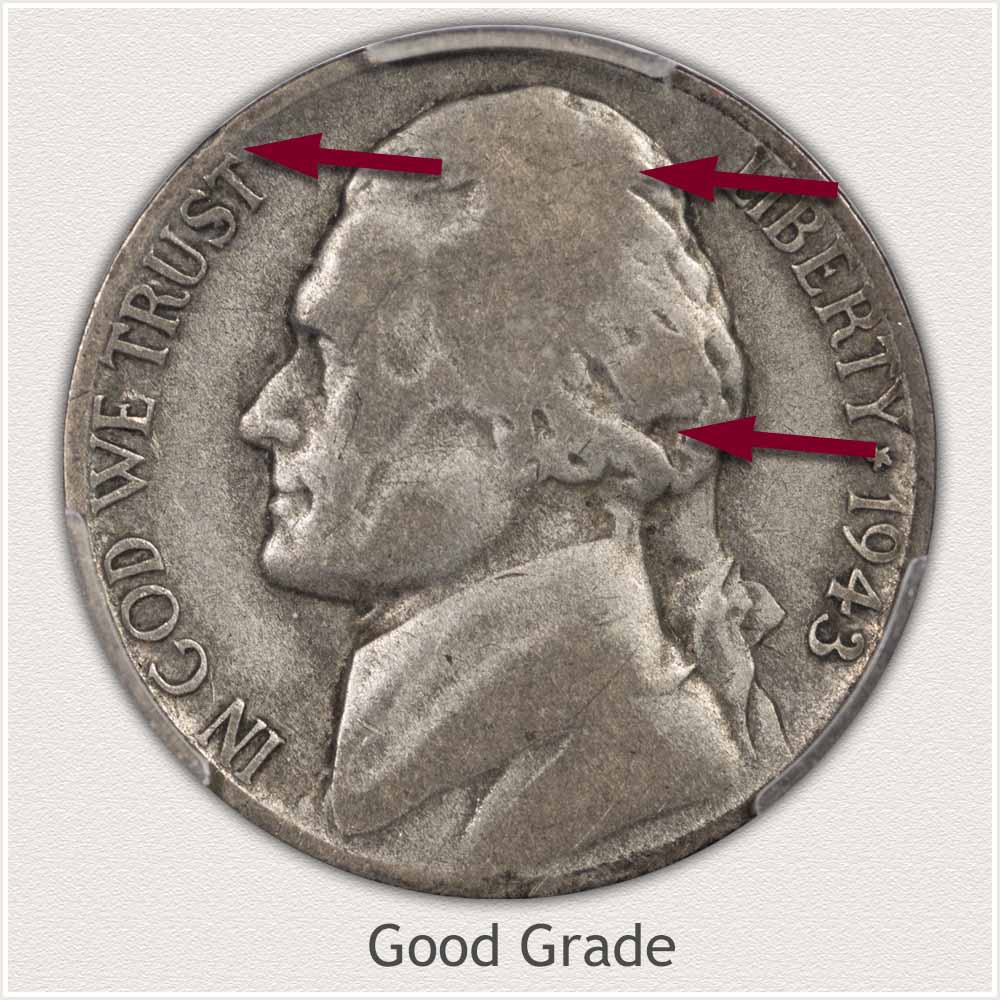 Good Grade: Heavy wear has lowered all high points to the design. Removed are the finer as well as a few major details. Condition is described as, extensive wear lacking detail.

Jefferson's hair is now a continuous flat area from the top of his head to under the ear. The once raise contours of the hair above the ear is missing. The major curl behind the ear is now in outline only. Flatness throughout the entire portrait is connecting in many areas.

Lettering along the rim is readable and just beginning to connect to the rim. A bold date remains. Heavy wear, but a bold outline Jefferson, defines the condition and grade.

Rarely does the U.S. mint in Philadelphia make a mistake when preparing dies for striking coins. Each working die's surface is expertly transferred from a master die. On rare occasions slight imperfections are transferred to these working dies. 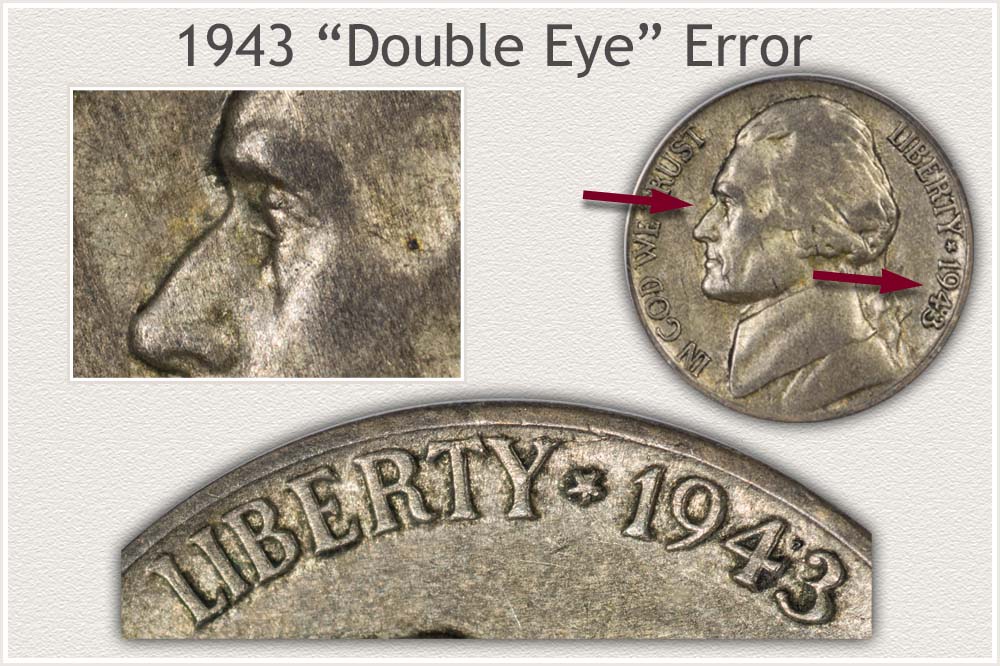 Viewing the close-up image of Jefferson's face and in particular his eye, notice the faint impression of a second eye in front. This second eye was mistakenly impressed into the die as it was made. During the die making process more than one impression is required to transfer the complete design from the master to working dies and if misaligned the design is off-set and "doubled". Rarely is an error of this sort missed in a final inspection.

Today many examples are known in circulated condition indicating the error went unnoticed over the years when first released. A 1943 Philadelphia Double Eye error nickel is now a popular collectible of the series. Depending on condition premiums are strong.

The Double Eye nickel is an easily visible and attributable error coin adding to its appeal and status within the early Jefferson nickel series. Many collectors routinely add the variety as part of a complete date and mint set of vintage nickels.

As you inspect 1943 nickels for this doubling error, use a single light source to create strong contrasts on the surface. Good lighting and magnification are helpful in identifying these popular and collectible nickels.

Early era dates standout with premiums, silver issues have enjoyed premiums over the years. Value chart lists all vintage nickel values. Follow the step by step method and determine how much all your old nickels are worth.

Have a look through your old nickels. Shield and Liberty "V" nickels are gaining in status with higher values. Even Buffalo nickels without dates are worth 10 cents each, amazing. Compare your coins to the "Grading" images to judge their condition then check their value on the coin value charts.

A quick reference to U.S. Coin Values. Images to identify each coin series and minimum values are listed for each type. Using the step by step method to how much coins are worth. Bookmark the Mobile Guide to your phone.