A major point to recognize is condition of your coin. Grade determines 1964 nickel value. Collectible coins are those found in excellent condition with all details remaining.

Follow the steps to identify date and mint combination and then the state of preservation of your coin. A few subtle points when recognized help determine how much these vintage Jefferson nickels are worth.

Collections of vintage Jefferson nickels are formed by date plus mint variety. With 1964 nickels both varieties are similar in value, however both are needed to complete a collection. One major factor to discovering a premium nickel is the condition of the coin. Huge numbers were minted, from these it is the top condition examples today's collectors pursue.

A few steps are needed to correctly identify your 1964 variety and possible collectability.

Varieties of 1964 Jefferson Nickel to Recognize

Two mints produced a huge 2.8 Billion nickels dated 1964. In order to reach this number, production of nickels dated 1964 continued into the following year. The U.S. was experiencing a coin shortage at the time; increased numbers of minor coinage were needed.

With the exceptional number of original mintages, the two mint varieties (Philadelphia and Denver) 1964 nickels are very abundant today. Both varieties are collected separately and important to correctly identify. 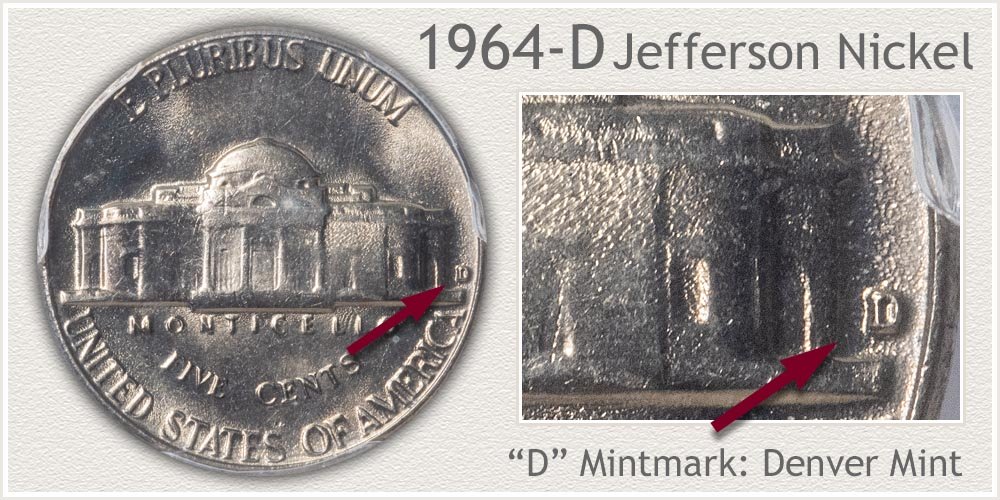 Denver was the leading manufacturing mint of 1964 nickels. 1.8 Billion were released into circulation, a record number. With so many available, the condition of your coin is the deciding factor to value.

Identify Denver nickels by the "D" mintmark on the reverse. To the right of Monticello, a small "D" mark is the Denver mint variety. 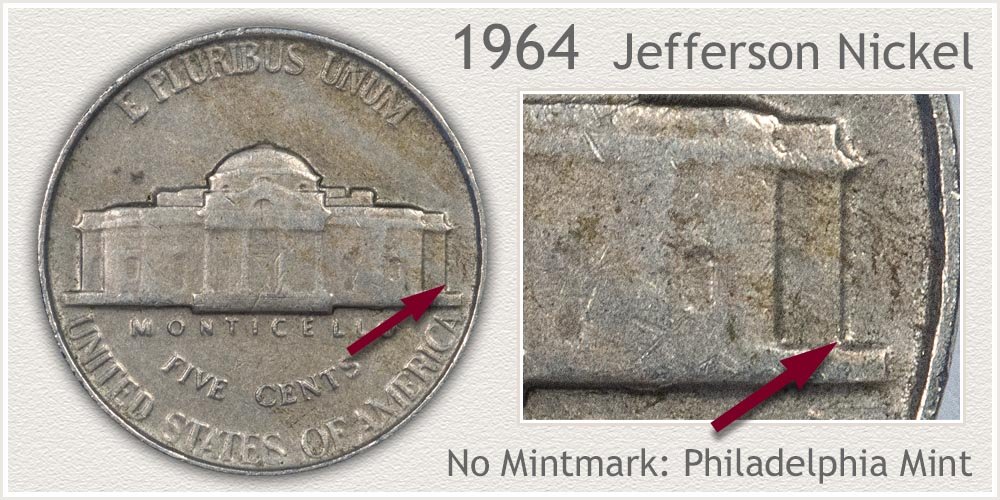 Also releasing into circulation over 1 Billion 1964 nickels, Philadelphia set a record for its production. These coins are considered common for the vintage era Jefferson series. A collector has many to choose from when deciding on a 1964 nickel to add to a set. Condition and aesthetic appeal are the primary considerations. Top grade examples are the coins worth a premium over face value.

Philadelphia did not place mintmarks on coins in 1964. The space between the rim and right side of Monticello is empty on Philadelphia mint variety nickels of 1964.

Grading judges surface quality of coins. Major and minor differences in the amount of wear are identified and compared to images representing grades. Inspecting key points of the design determines the remaining quality of the surface and is used to gage progression of wear. 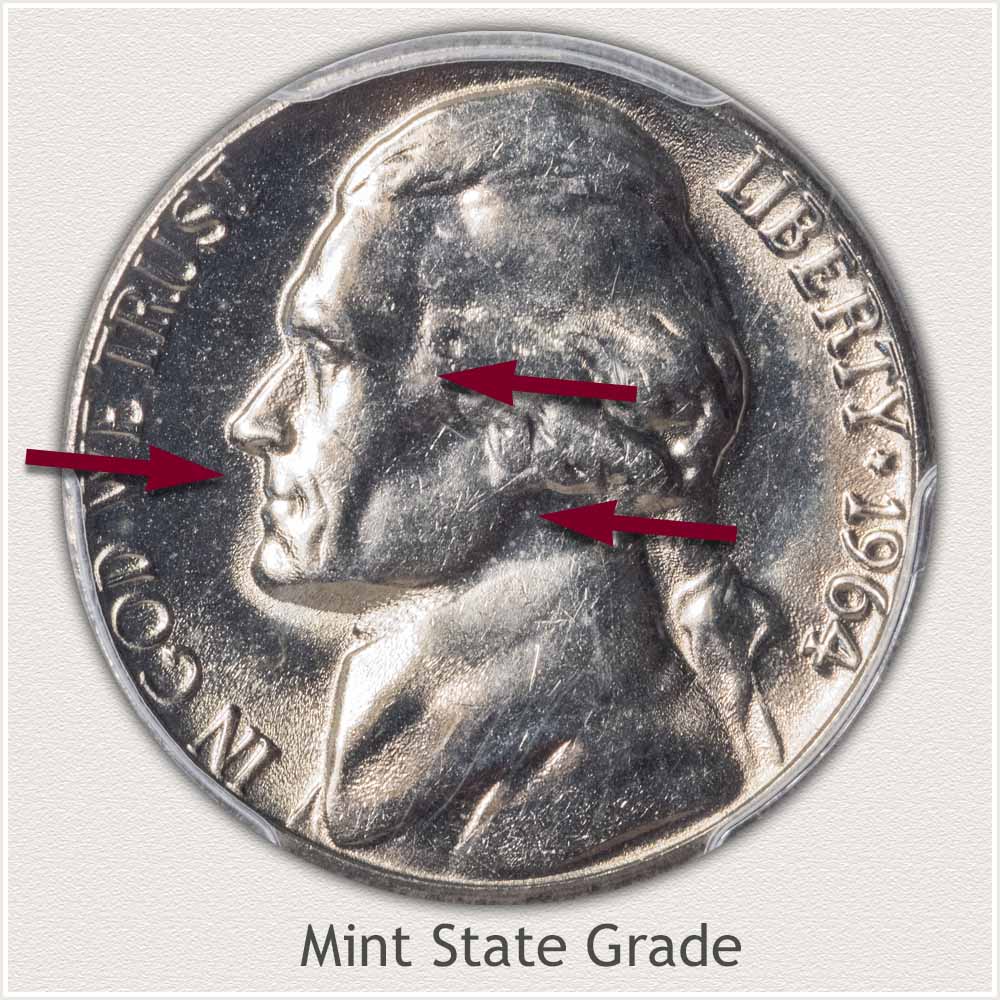 Mint State: No wear to the surface is the definition of a nickel in Mint State grade. The coin is in the condition as minted, with all original detail visible, and importantly the texture of luster covers the surface.

Using the presence of luster as an indication of preservation, look closely at the surface of the metal of Jefferson's face. High and low relief areas defining the cheek and his mouth are all consistent; texture, shine, and color tone of the metal matches. An absence of wear and smoothing of the metal is confirming the mint state grade. Texture of luster is quickly removed when a coin is used and a smooth surface of wear is dull in color tone.

Jefferson's hair and the large area of collar and shoulder are all reflecting a similar shine as his face. Luster is complete on coins without wear. 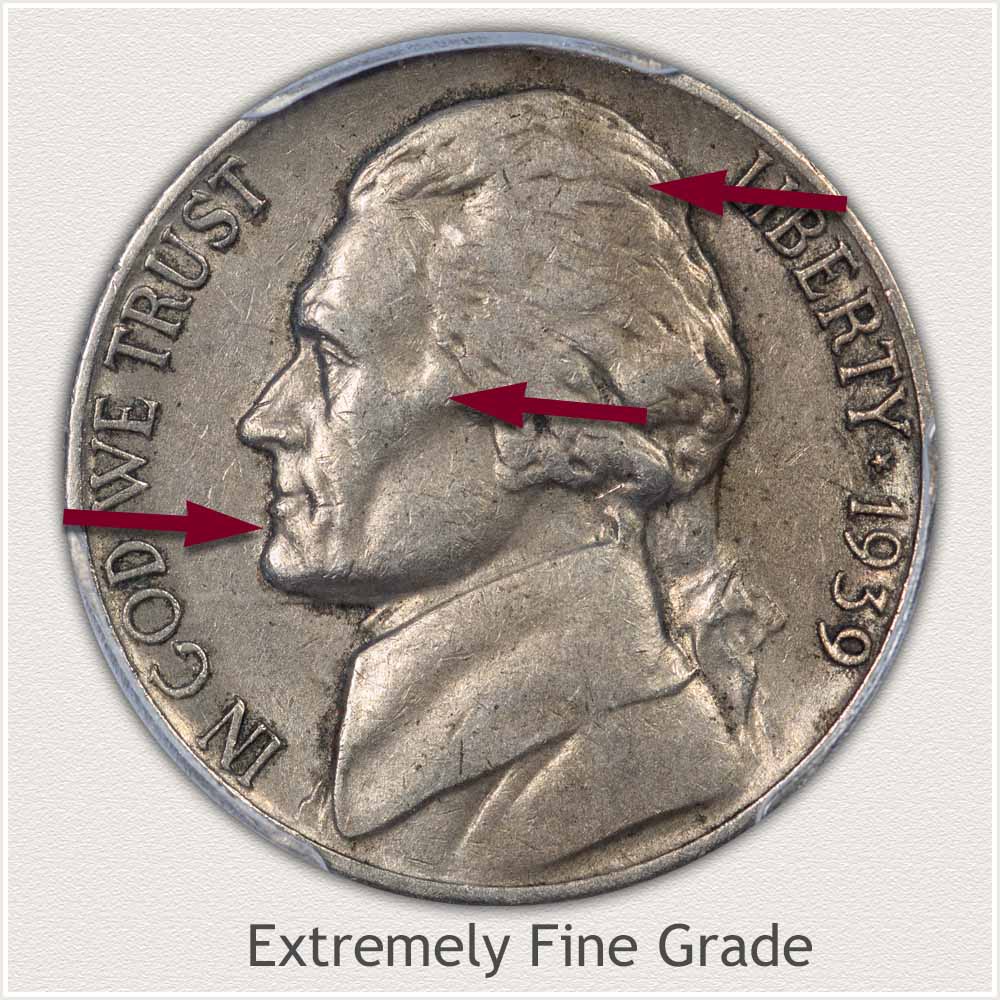 Extremely Fine: Trace amounts of wear lightly scattered on high areas describes a nickel in Extremely Fine grade. Most luster is now removed and a slight amount of color change and dullness is seen on high points.

Jefferson's cheek below the eye is now worn a smooth texture. A flat area has developed and removed the rounded contour of the cheek. In the areas of his mouth and chin the raised areas are beginning to flatten and show smoothness.

Overall, the crisp details of hair strands are slightly visible helping confirm the Extremely Fine grade. Minor wear has reduced the contours of the collar with a separation just visible to the shoulder and coat. 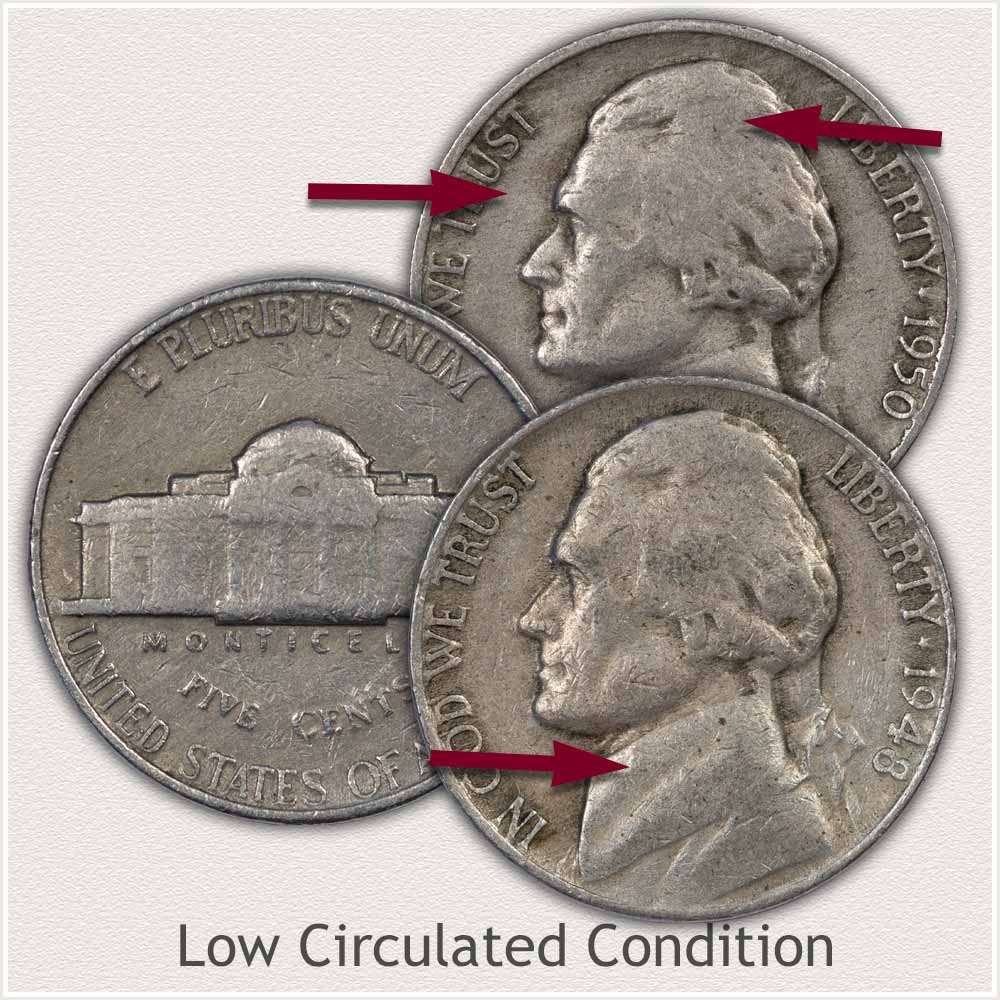 Low Grade Condition: Visually, a moderate to heavily worn nickel is smooth across most of the design. Lacking fine detail identifies the coin as below the Extremely Fine grade.

Large areas of flatness are seen on facial features. A once high-profile cheek is reduced and connected to the eyebrow and jaw in one flat area. Jefferson's hair is smooth with no fine strands of hair visible.

The tall collar is visibly worn flat in areas and the line separating the shoulder is missing across the center area. The reverse displays heavy wear with Monticello faint across the front; small details of the windows are very faint. Overall, the pleasing eye appeal of a well detailed coin is missing on low grade Jefferson nickels.

Collectors find the vintage Jefferson nickels an interesting series to collect. A study of the nickel coinage of the time discovers many themes suitable to building a worthy collection. 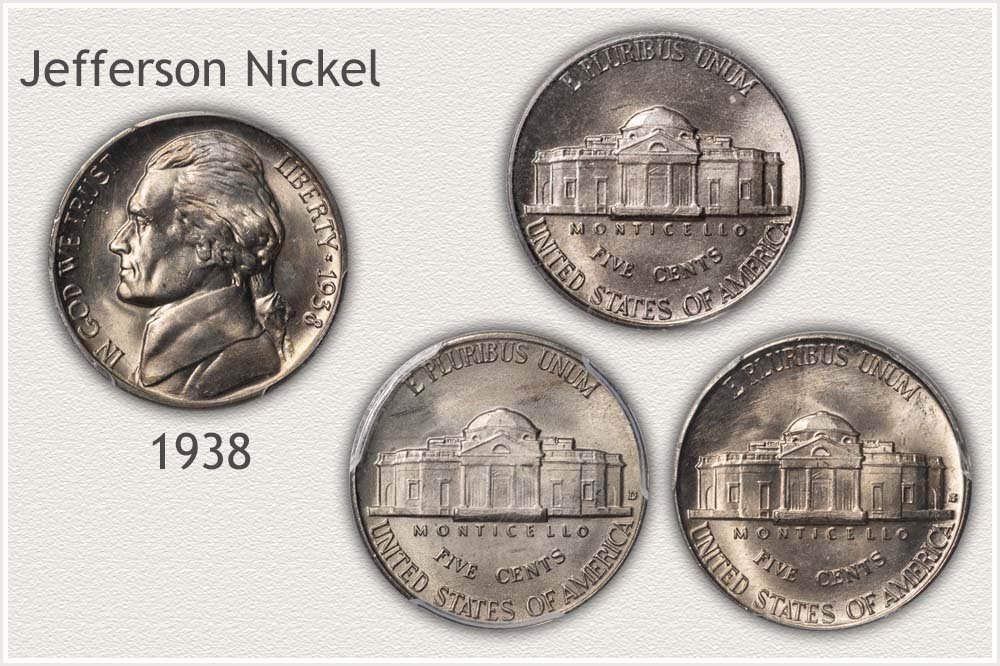 First is the vintage era of the series 1938 to 1964; a theme within the continuing Jefferson design. Staying exclusively with the vintage time frame, a complete date and mint set is a popular pursuit of many collectors. The challenge of all examples in mint state grade is rewarded with a set of 71 nickels displaying these coins with their complete as minted condition.

A very special theme within the era are the silver issues of the years 1942 through 1945. A unique coin of the entire U.S. coinage was created with the addition of silver to the metal composition of Jefferson nickels. A set of "silver nickels" is a historic and valuable collection on its own.

A type collection of the U.S. nickels is a popular way to collect. An example of each design of nickels is formed into a set representing nickel coinage from its beginnings to current. One each of the Shield, Liberty, Buffalo, and Jefferson series is collected. Using "first year of issue" pieces, a 1938 Jefferson is chosen to display the design. Beginning years of design coinage are in steady demand.

Interestingly, Philadelphia is the only mint striking, in the same year, both a Copper Nickel and Silver variety.

Some collectors specialize in just one mint, in the Jefferson series, the San Francisco mint is popular. A specialty set of San Francisco Jefferson nickels includes a "first year of issue" the 1938; a low mintage variety. Also, five of the top ten lowest mintage nickels of the series were struck at San Francisco. Silver issues of 1942 to 1945 include San Francisco coins, adding a special appeal to the collection.

Popularity of collecting Jefferson has a strong base of historical value. Many variations in themes and how to collect the series are available to all collectors. Affordability to new and young, and challenges to advanced collectors are found within the vintage era Jefferson nickel.

Including more relating to your 1964 nickel value. These early date Jefferson nickels are becoming valuable. Easily find how much your old coins are worth.

Value charts, along-side grading images and using a step-by-step process; identify the potential of your coin.

Rare nickels, for example, ones with double mint marks, occasionally "hide" in your box of old coins. Interestingly, some are still found in circulation today. The reason is most require a magnifying glass to discover. In this case the smallest of details makes for a valuable coin.

List your Jefferson nickels and record their values. Should you decide to sell... use the worksheet as an invoice and packing slip when sending coins through the mail to dealers. It indicates you have done your coin values homework.

Coin values are influenced by popularity. Large numbers of collectors create demand showing in premiums in value. Collecting interests vary and are ranked on charts by denomination and series.

Recommendations on basic supplies that greatly improve coin storage. Providing for safe handling, preserving of value, and organizing your box of old coins.

A quick reference to U.S. Coin Values. Coins are identified by images and listed by type. Charts list common date values. See the sections on mintmarks and varieties. Steps include grading to narrow how much each coin is worth. Bookmark page to phone - Mobile Guide.