A few steps are taken to identify and determine 1961 nickel value. Meeting the expectations of collectors is the requirement to value in any coin. Jefferson nickels of the vintage era are collected by date and mint with an eye towards the condition of the coin.

Step 2 below; "grading condition" helps to identifying the quality nickel from the many in average condition. Look for crisp sharp details still visible to find the collectible example of an old vintage nickel.

1961 nickels were minted in quantities large enough, today they are considered abundant and easily obtainable. It is the condition of the coin that determines premium values. Vintage nickels are collected including all mint varieties of the year. Two mint issues were produced and are identified for 1961. 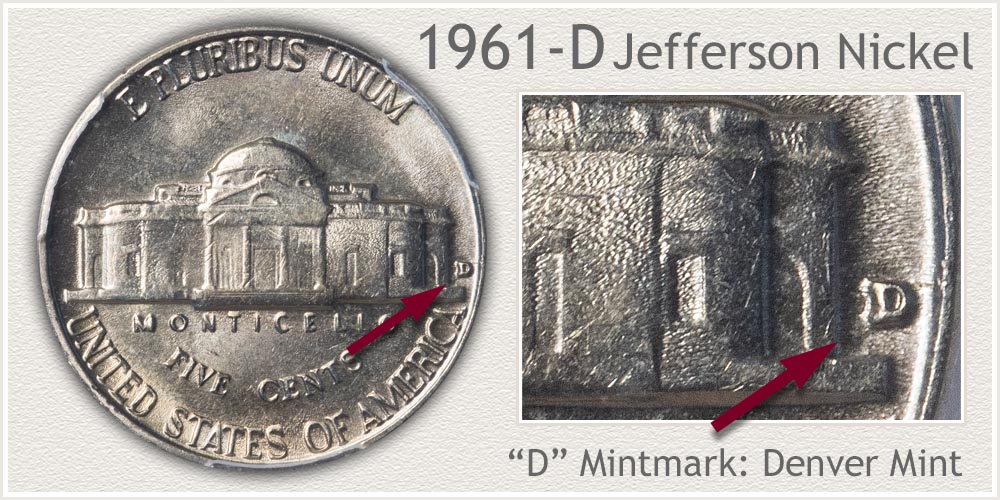 Ever increasing numbers of nickel were struck in the 1960's. In 1961 Denver nickel production increased again to a new high of over 229 million pieces. These are considered abundant today. The Denver mint variety is the likely find of the two varieties of the year. Premium value is found in the Mint State condition examples. Worn and circulated pieces are the typical condition with little premium.

Denver mint issues are recognized by the "D" mintmark on the reverse. Next to Monticello and near the rim a small "D" mark indicates Denver struck the coin. 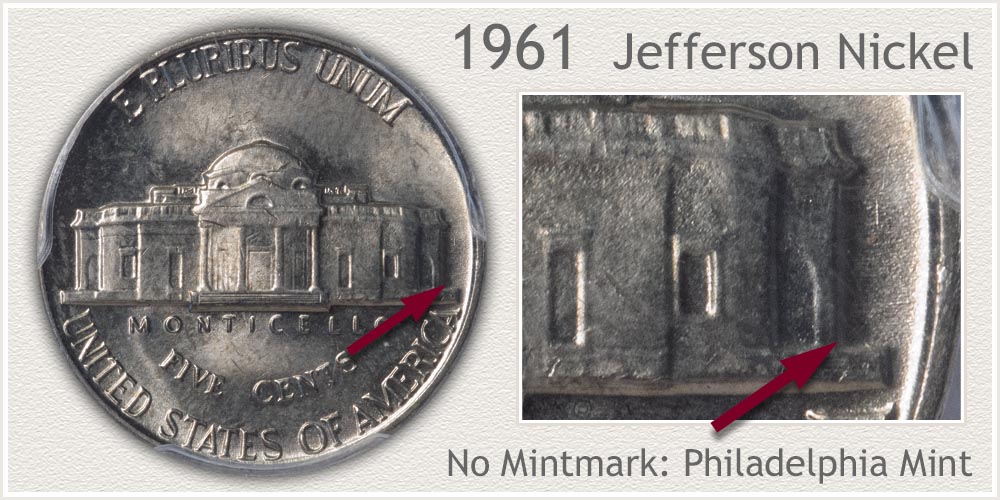 1960's era nickels were produced in large quantities. Philadelphia nickels, the other mint variety of 1961 recorded over 73 million released into circulation. Ample numbers produced results in many available today. Collectors are selective in choosing an example to add to a collection and prefer high grade coins. 1961 is known as an affordable year of the series.

The mint striking the coin is important to identify and locate values on charts. Philadelphia did not use a mintmark on 1961 nickels. If no mark is found on the reverse next to Monticello, Philadelphia struck the coin.

One of the objectives of collectors is finding a pleasing example to represent a date and mint within the Jefferson nickel series. Coins are rated by their condition and a grade is assigned to note the state of preservation. Example images of the different grades are compared to a coin helping recognize and confirm its condition. 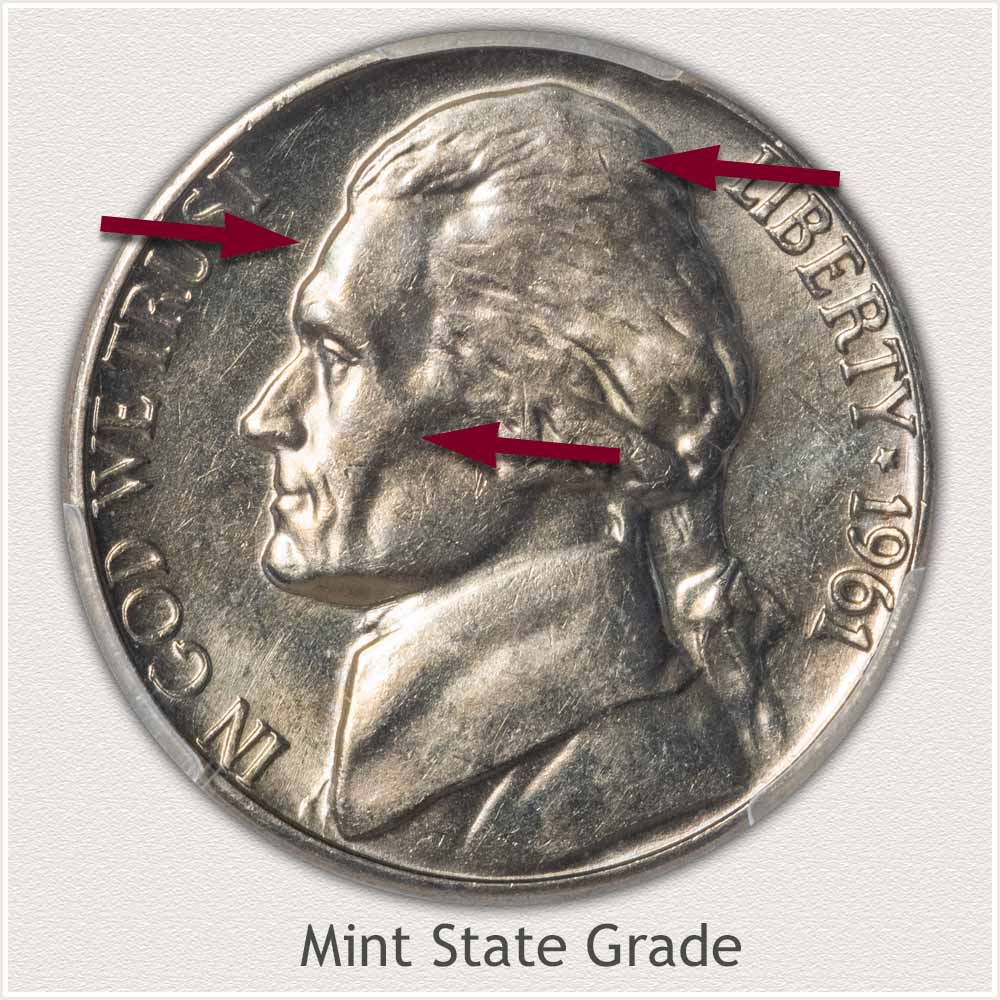 Mint State: The highest grade represents a coin without any wear to the surface. The example 1961 nickel displays an appealing satin luster covering the entire coin. Along the high points, luster remains with no breaks in color, texture, or shine.

Comparing Jefferson's forehead with his facial features finds a similar look without any dulling or change in color tone. Any disturbance of luster caused by wear dulls the surface and begins to smooth the metal. Inspect the cheek and jaw, two additional high-profile areas. Presences of luster confirms a mint state coin.

Looking at the difference between a noticeably worn coin and a mint state coin helps identify the subtle shimmer luster effect when the coin is tilted under a light. 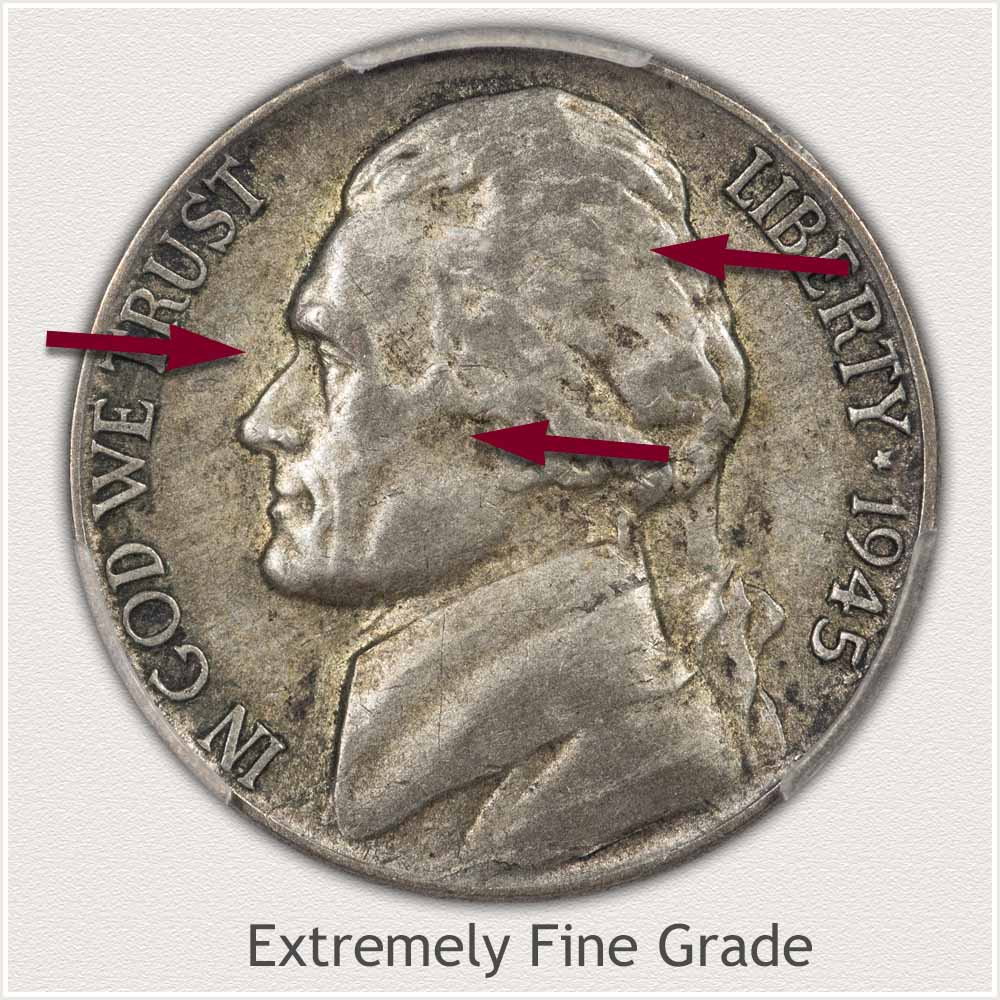 Keeping a coin in the Extremely Fine grade is the flattened areas are not connecting. Separations remain within the waves of hair. Secondly, eyebrow, cheek, and jaw are separated by lower contour areas.

Light circulation wear confined to high areas and bold facial features is the look of an extremely fine grade nickel. 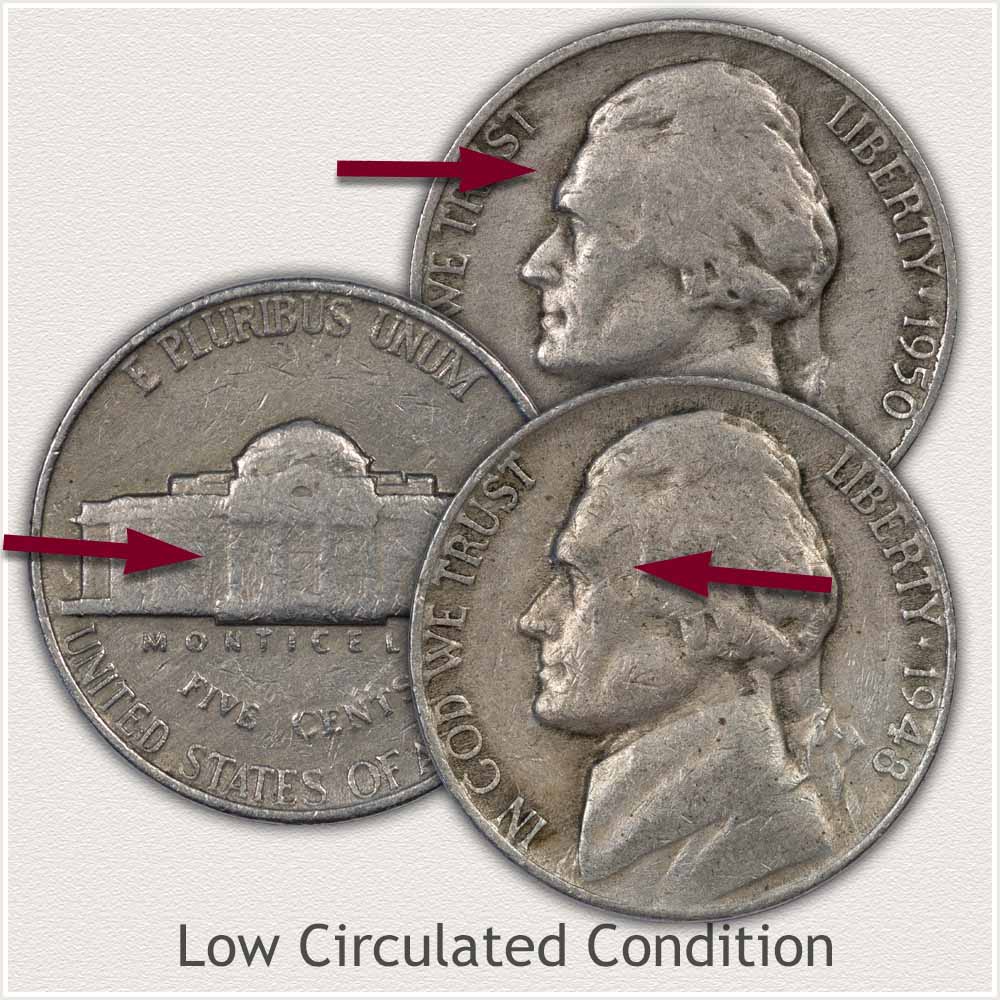 Low Grade Condition: A moderate to heavy amount of wear on the example nickels lowers condition below the Extremely Fine grade. Low condition nickels are noticeable as "smooth" in appearance.

Jefferson's forehead is beginning to blend with his hair, only a slight defining line remains. His facial features are now flattened to the point of merging. A continuous flat spot connects the eyebrow with the cheek below and continues to the jaw. Most of the fine details of the hair is now smooth, noticeable in the central area.

Moderate to heavy wear removing the fine details and flattening major details is a low-grade coin.

The example coins represent a trait found in the Jefferson nickels series, especially the late vintage years of the 1960's. Nickel is a difficult metal to strike into coinage as seen by different qualities of strike on the coins. Nickel's hardness is ideal because of the longevity holding up in circulation. However, this toughness also contributes to many problems in producing a fully struck, detailed coin. 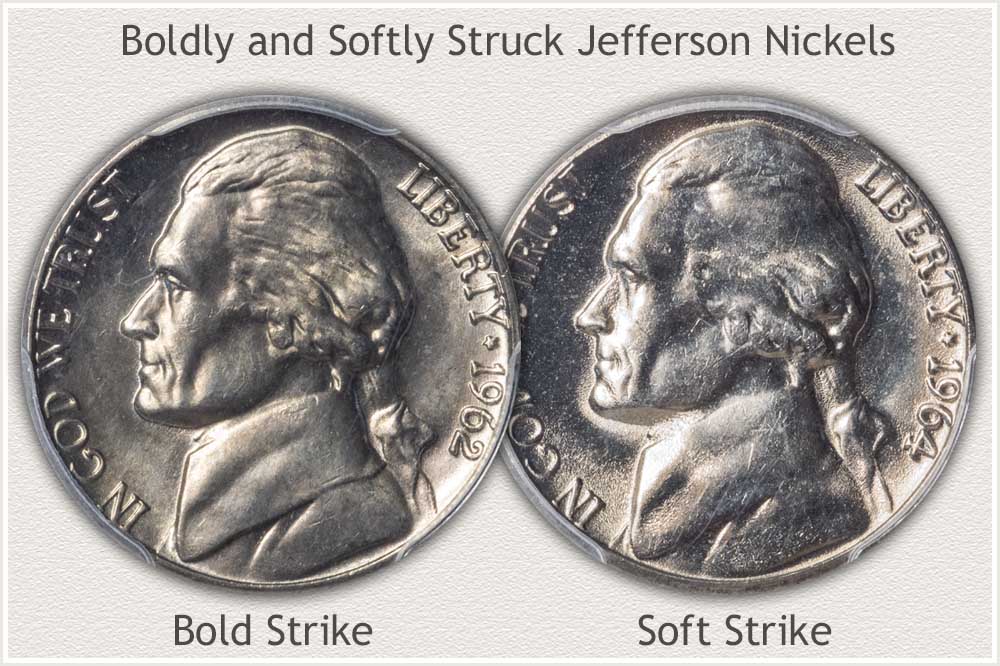 View closely the bold strike 1962 nickel. Jefferson cheek is rounded, his jaw, another high contour area is fully formed with no flat spots near the collar. The tall collar is complete with a rounded detail at the neck line and a full separation at the shoulder and coat. Hair detail is covering the central area with fine strands fully visible.

Next, a close inspection of the 1964 nickel quickly spots lacking detail as compared to the 1962. First to notice is the lack of fine hair strands throughout. A large smooth area represents the top of Jefferson's head and just below is also lacking any fine hair detail. His jaw is noticeably flat across to top of the contour. Adding to the lack of detail is the missing crisp collar lines at the neck and shoulder.

Both coins are mint state grade with no wear to the surface. Lack of strong details and fully raised contours within the design is giving the 1964 nickel an "faded" look. Eye appeal of the 1962 is enhanced by its bold details and strong striking of the finer details.

Set aside the "crisp" vintage nickels, these are the eye appealing quality sought by collectors.

Jefferson nickels are typically collected in high grade. Value chart starting in 1938 show the collector grades and values. Identify the nickels in demand by collectors using a step-by-step method. Images and descriptions are used to grade condition.

Coin values are influenced by a series popularity. Large numbers of collectors create demand showing in premiums paid for coins. Collecting interests are ranked on charts by denomination and series. Jefferson nickels are a popular series for both advanced and new collectors.

Placing a value on a coin collection is done by following a step-by-step method. Each series is identified with images, important dates are highlighted. Grading condition, one of the important steps is accomplished with images of grades to compare your coins. An organization of your coins is part of the process.

All old U.S. coin values. Compare your old coins to an image index to identify all U.S. coin series, from Cents to Gold. Value charts, grading images and a step-by-step procedure uncovers how much your box of old coins is worth.