Low production numbers combined with availability is a noted trait forming a base to 1950 nickel value. Important to identify is the mint variety collectors seek.

A dedicated group of collectors are assembling sets of Jefferson nickels. These collections of vintage nickels include examples of all mint varieties for each date. 1950 is not a typical year in numbers struck. Combine, recognizing variety and condition to find how much your coin is worth. Proceed through the following steps.

Your 1950 nickel is an elusive find. It is a favorite year with collectors and an exciting addition to their collections. With a built in alure because of the date, the next and important step is recognizing the quality of your coin.

Values rise on a scale along with the state of preservation. Subtle points are judged and grade is determined in Step 2. Compare your coin to the grading images to narrow its range on the value chart.

1950 is one of the very interesting dates in the entire Jefferson nickel series. It has intrigued collectors for decades. Soon after release of the 1950's nickels it was realized by collectors as a low production year for coinage. San Francisco did not strike any nickels alerting collectors to watch numbers struck from Philadelphia and Denver. As it turned out both mints struck below average numbers for the year.

Correctly identify your 1950 nickel variety. Both are needed complete a set of vintage nickels. 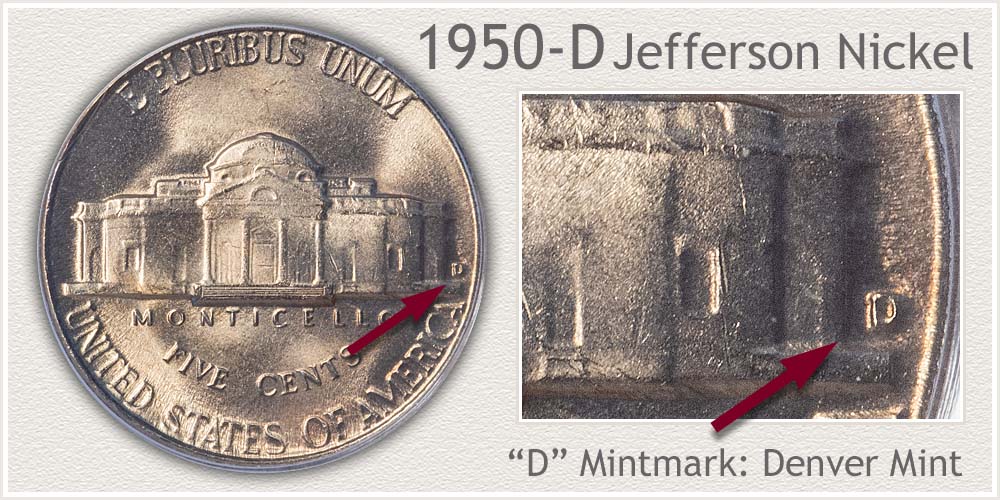 A 1950 Denver nickel has the distinction of the lowest mintage of the entire Jefferson nickel series. 2,630,030 nickels release to circulation is a very low number of coins and collectors highly prize the variety. These are also one of the few dates and mints of the series with a premium value in circulated condition.

Denver placed a "D" mintmark on coinage to identify the mint. The small letter is on the reverse to the right of Monticello next to the rim. An important variety to identify. 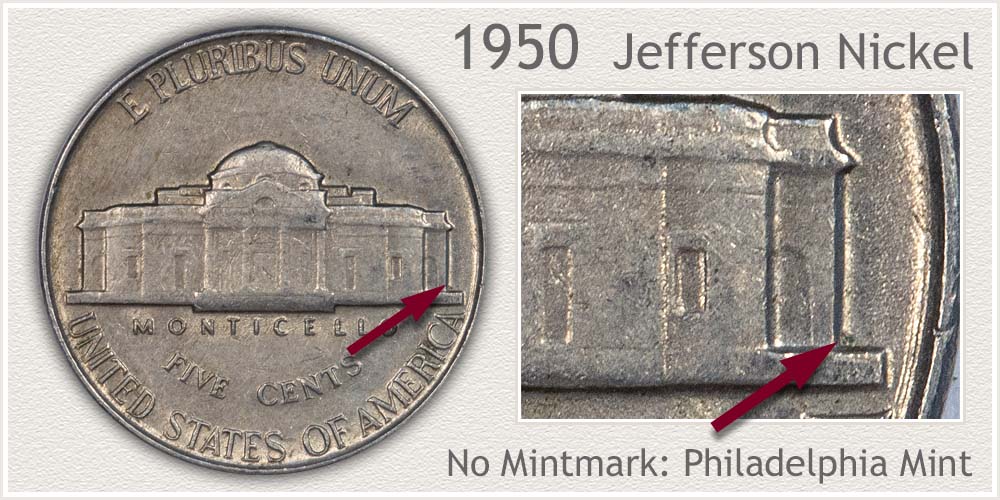 Philadelphia, the main mint normally struck tens to hundreds of millions of nickels per year. 1950 is an exception with numbers minted just over 9.8 million, turning out as the eight lowest of the Jefferson nickel series. Low numbers of coins struck is an indication to collectors of a potential scarce variety. Today, premiums have developed for examples in lightly circulated condition.

In the 1950's Philadelphia did not use a mintmark to identify it coinage. Look on the reverse of the coin. The absence of a mark in the area to the right of Monticello confirms the Philadelphia mint variety.

1950 Jefferson Nickel Value is at a Premium

1950 nickels are a premium value coin in grades from Mint State through the lower circulated grade of Good. Grading qualifies the amount of wear when compared to standards. The different grades are listed on value charts to narrow how much the coin is worth.

Inspecting the surface and judging the condition is best started with a Mint State coin displaying all details. Knowing the full design helps spot missing elements caused by wear. Use a single light source and a magnifying glass to bring out subtle details. 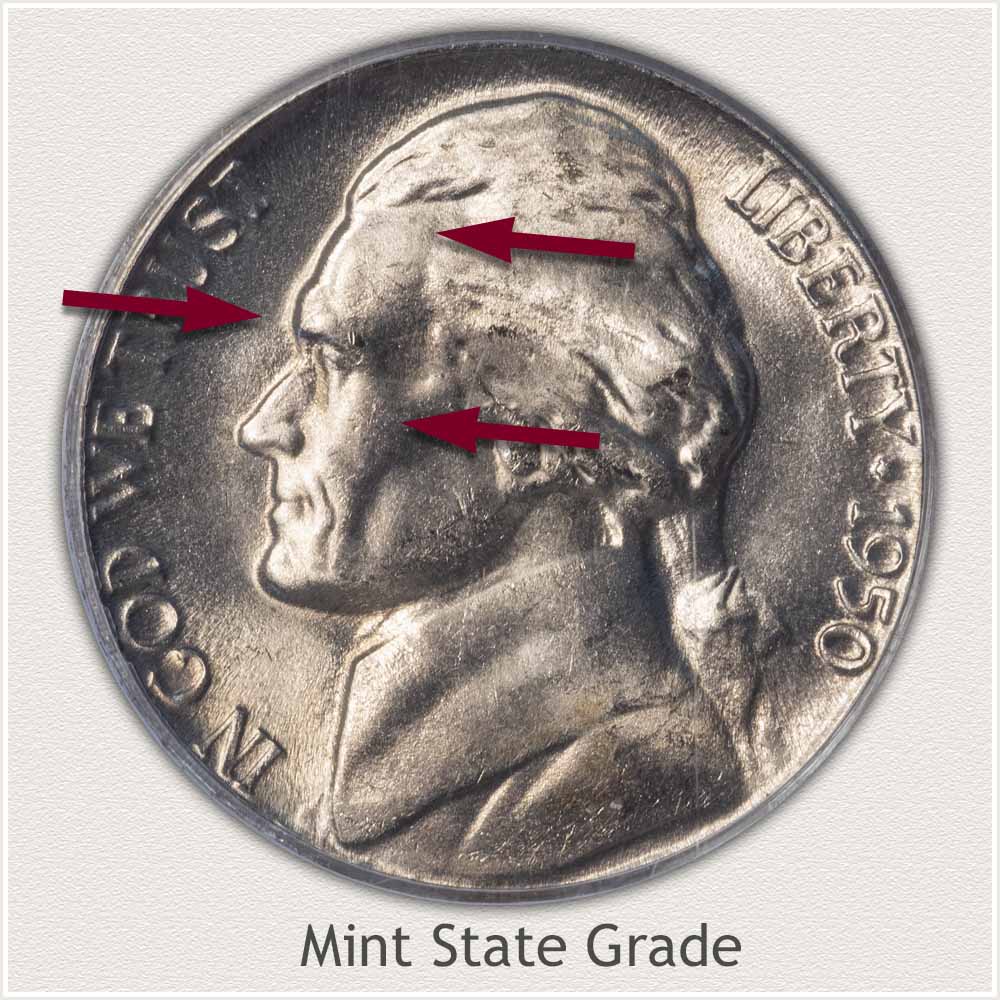 Mint State: A close focus is made of the entire surface of the coin to detect any signs of wear. No wear to the coin defines a Mint State grade Jefferson nickel.

Because of the depth and contours of the design, many areas on Jefferson's portrait are prone to first signs of wear. Looking at his eyebrow, there are often nicks and small marks seen, however the texture and shine matches the metal further up on the forehead. No smoothing of the metal is also indicating a mint state coin.

Cheek below the eye remains without any dulling from wear and the ridge connecting cheek to hair is fully covered with the texture of luster. 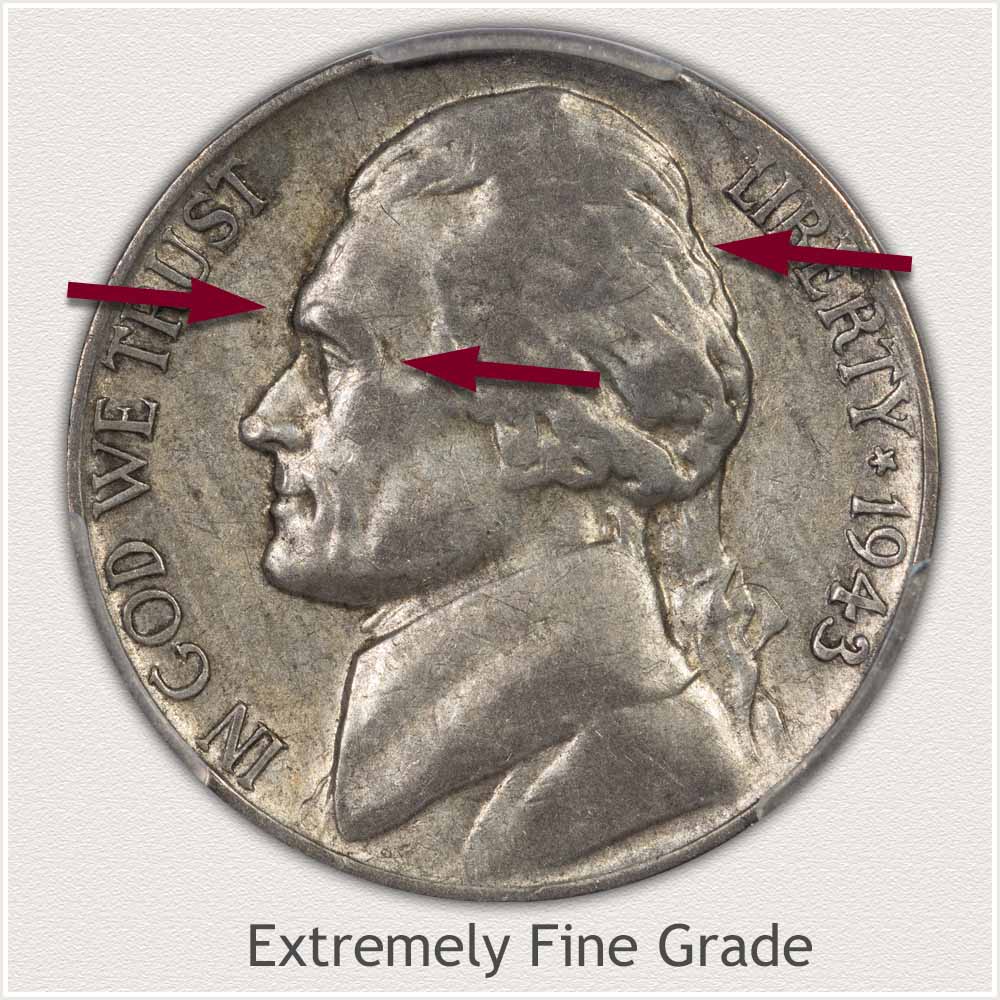 Extremely Fine: Once a light amount of wear has removed the tops of the highest points of design the Extremely Fine grade is assigned. Most luster is gone from the surface and color changes are noted from high areas slightly different from deeper recesses.

Smoothness is evident on Jefferson's eyebrow. The once rounded contour has a slight flatness and wear is seen as connecting the cheek below the eye. Only minor amount of metal is lost and flat areas must remain disconnected.

Deep contours remain throughout the face and hair, giving the coin a high relief appearance. Crisp details within the lower protected areas add to the eye appeal. 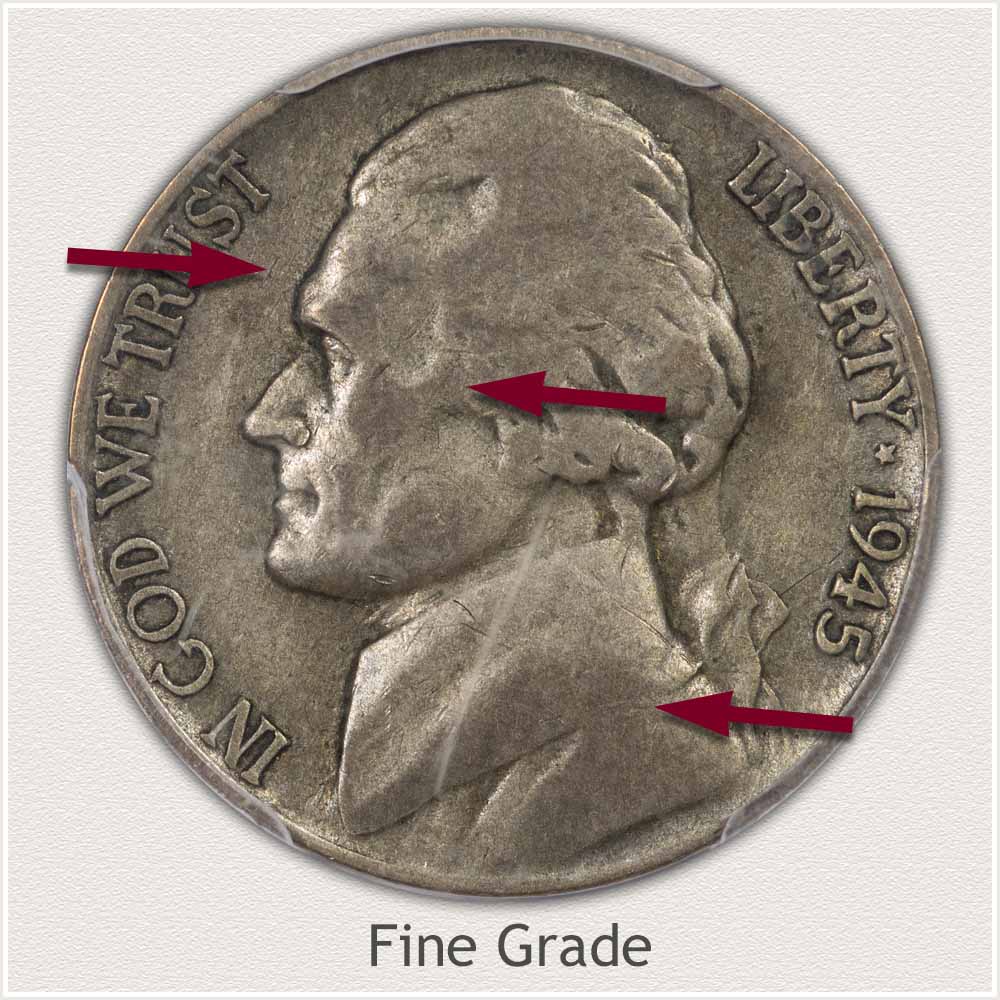 Fine Grade: Moderate wear causing lack of detail within the hair is a Jefferson nickel in Fine grade. Wear is noticeable over the entire surface from the top of Jefferson's head to the lower coat and collar.

Little to no contour separates his eyebrow for the forehead. Once raised in profile, the cheek below the eye is now flat and connected with both the hair and eyebrow above. Keeping the example coin in the Fine grade is the disconnect of flat areas of the jaw and cheek.

Jefferson's coat is beginning to merge with the collar line. Overall, most major design is well raised above the field of the coin. 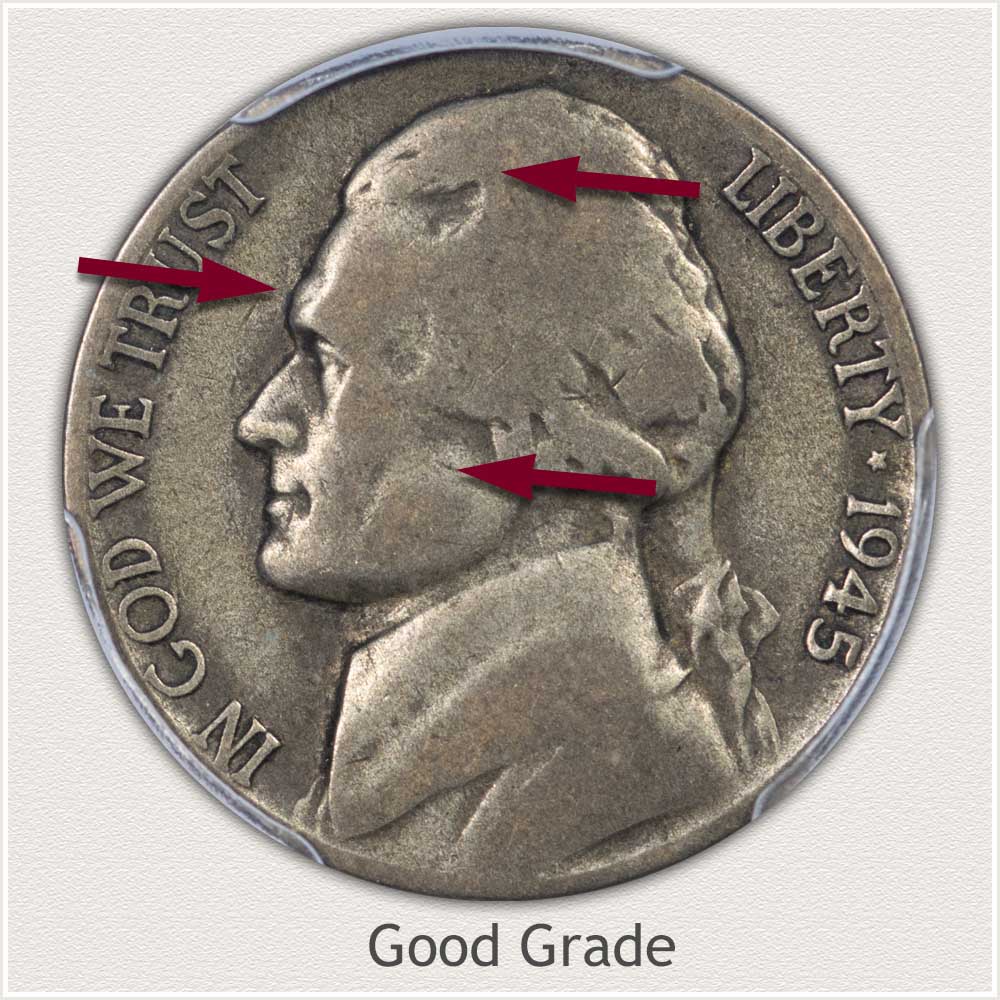 First to notice is the lack of definition of an eyebrow. A smooth, flat area is Jefferson's forehead and hair at the top of his head. The eyebrow is fully connected with the cheek below the eye and also merging with the jaw. Contours of Jefferson's face are flattened and merging with the hair line.

Smoothing has removed most of the line defining the coat from the collar. Many major details are now worn flat and blended together. A clear date remains with lettering just beginning to touch the rim. Lack of large marks is a plus to the example coin.

Grading the subtle points to Jefferson nickels is covered in greater detail on both the obverse and reverse of the coin.

Making numismatic news has had a lasting effect on values of 1950 nickels. The year saw a large decline in production of nickels. Other denominations, cents, dimes, quarters, and halves maintained their average levels of mintages. With nickels having a large drop in production numbers; headlines in the numismatic journals alerted collectors. 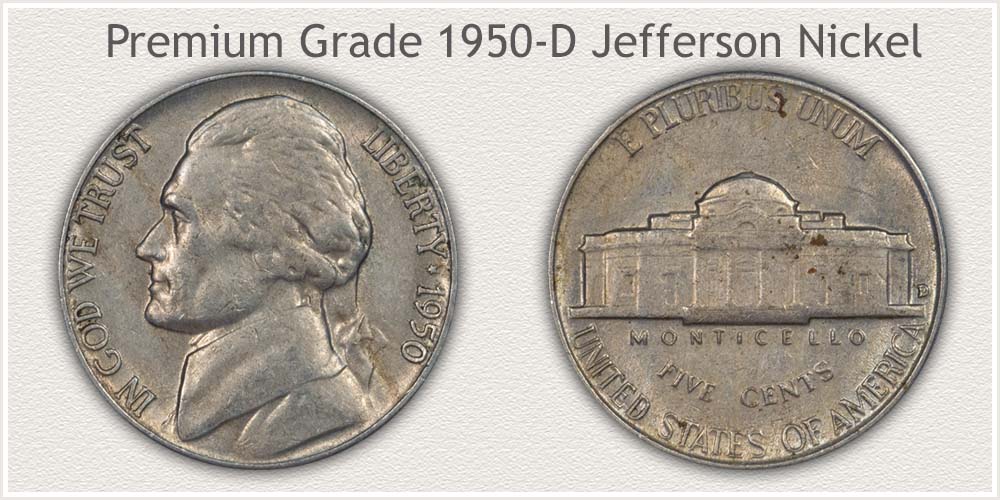 The Denver mint issue of 1950 amounted to just 2,630, 030 pieces and became, overtime the lowest mintage variety of the entire Jefferson series.

Secondly, the Philadelphia mint struck an unusually low 9.8 million nickels for the year. Combining the totals of Denver with Philadelphia places 1950 as the lowest mintage year of the Jefferson series. An uncommon occurrence and reported quickly to the coin collecting hobby.

Soon after minting and the news of sharp declines in coinage, the search for a "scarce" nickel began. As a result of intense saving, a vast amount of the original mintage was accumulated early after release.

Jefferson nickels are typically collected in high grade. Value chart starting in 1938 shows the collector grades and values. Identify the nickels in demand by collectors using a step-by-step method. Images and descriptions are used to grade condition.

Jefferson nickels and your 1950 nickel value are part of the long running five cent denomination. Find value charts and step by step methods to determine how much the older series of Shield, Liberty, and Buffalo nickels are worth.

Among 20th century US coins, collecting Jefferson nickels is popular along-side Buffalo nickels as a favorite with collectors. A study of Registry Set totals identifies popularity of each series by numbers of collectors involved in actively assembling collections. An insight into the coin hobby and the many US coins by denomination and series.

A quick reference to U.S. Coin Values. Images to identify each coin series and minimum values are listed for each type. Using the step-by-step method to how much coins are worth. Bookmark the Mobile Guide to your phone.

All old U.S. coin values. The home page is an excellent index with images, helping to identify your coins, including text links to all coin series, from Cents to Gold. Value charts, grading images and descriptions uncover how much your box of old coins is worth. Begin the step-by-step process to value any coin series.