Collectors are noting two facts; affordable 1947 nickel value and advanced age of the coin. Collections typically include all varieties of nickels minted each year. Mints and condition are identified as part of the value process.

Using a step-by-step process recognize where on the value chart your coin is listed. Also, a key point of interest to collectors is condition of these old nickels. Judge your coin compared to images of the different grades.

Begin the value process by determining the collectability of the date and mint variety. Value charts list dates and each mint separately.

Handle the coin by the edges, these vintage nickels are appreciated by collectors with the least number of marks and scuffs to the surface.

Total numbers of nickels minted in 1947 declined, however, not to the extent of creating scarce varieties. Philadelphia, the main mint, Denver in Colorado, plus the San Francisco mint in California, combined to strike 157.5 million nickels dated 1947.

With collectors assembling sets including examples of the different mints for each year it is necessary to identify mintmarks. 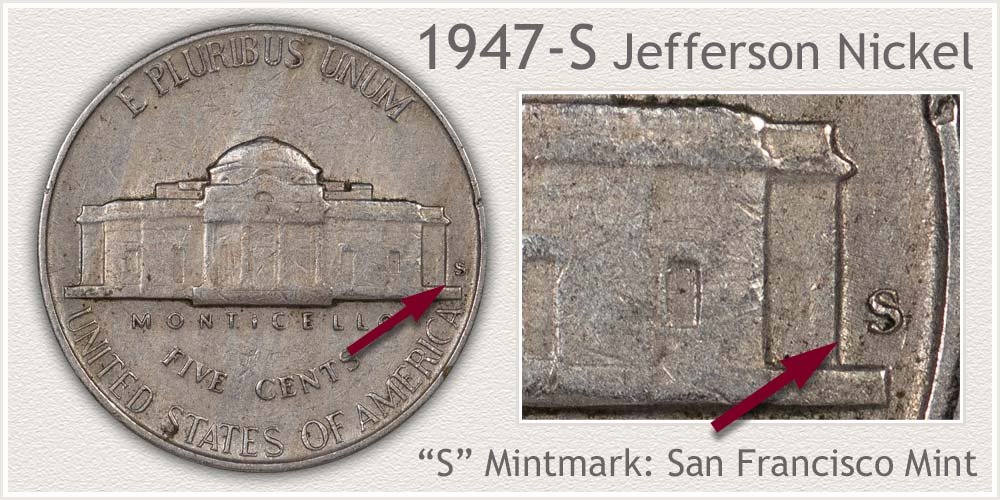 The economy on the west coast was growing and the San Francisco mint struck over 24 million nickels in 1947 to meet demand. Because of the large numbers of coins for the year the variety is available today. A nice crisp, detailed coin is favored by collectors.

San Francisco placed a "S" mintmark to the right of Monticello to identify its production. Look closely between the rim and Monticello for the mintmark. 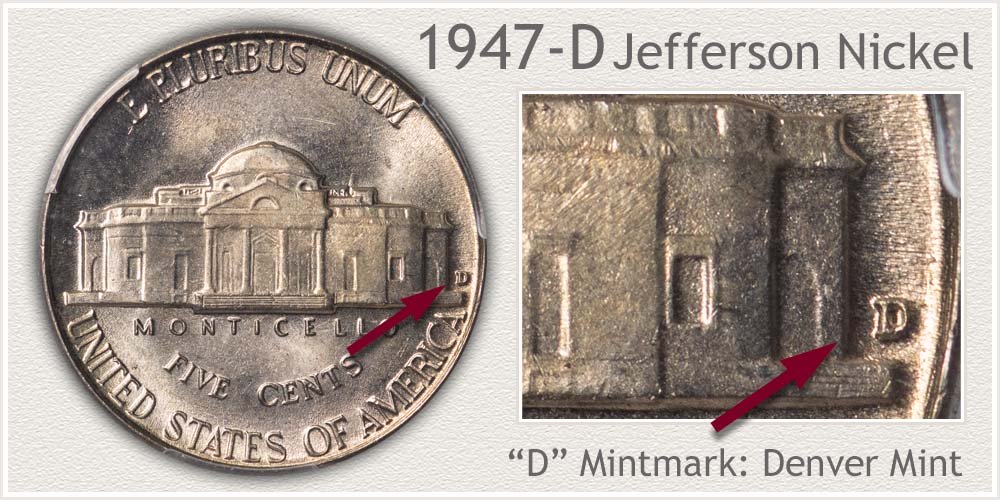 Denver, always a steady producer of coinage, struck over 37 million nickels with a "D" mintmark in 1947. Ample supplies of the coins remain today, standout examples exhibit slight to no wear to the surface. A lightly worn coin is above average in condition.

To confirm the Denver variety, look on the reverse on the right of Monticello. A small "D" mintmark is located between the edge of the building and the rim.

Large numbers of nickels were required on the east coast in 1947. Philadelphia struck over double the amount as the branch mints. These 95 million nickels dated 1947 circulated for decades. Many became very worn, others damaged, and the majority were retired from circulation. Collectors note the Philadelphia variety is abundant.

No mintmark was used by the Philadelphia mint in 1947. On the reverse, at the right side of Monticello, if the area has no mintmark, it was struck at Philadelphia.

Determining your coin is of collectible quality adds to its value. Quality is the surface condition of a coin and judging its condition is known as grading. When first minted coins are in Mint State grade. After time in circulation wear begins to diminish the surface and different amounts of wear are recognized and defined by different grades.

Grading Jefferson nickels is done comparing to the following images. Start with a Mint State example to see a coin in its original condition. 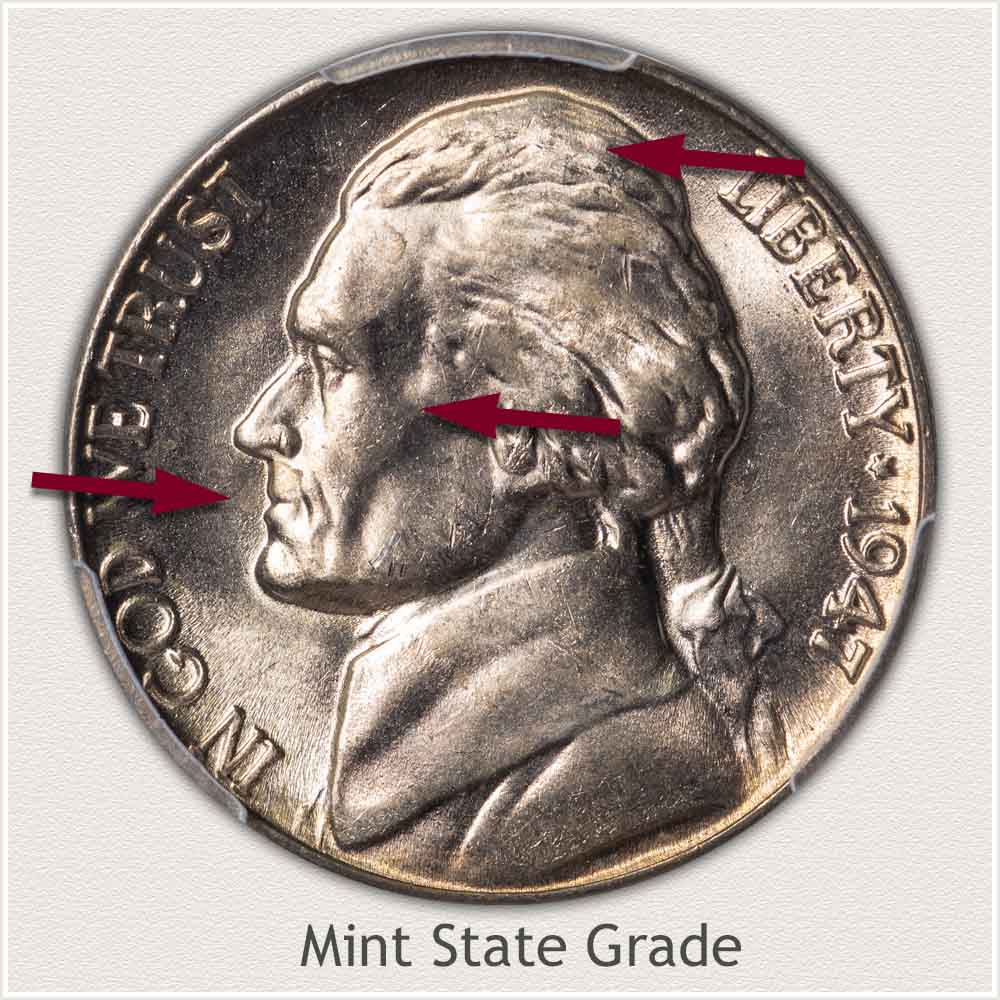 Mint State: Highest in preservation and value, Mint State Jefferson nickels are favored by collectors. These high-grade coins still exhibit the original mint luster produced during the striking process. No wear to the surface or missing luster defines the Mint State grade.

Focus on the high curved lines behind Jefferson's mouth. No smoothing of the metal is noted with texture and color remaining the same as further back on his cheek. This area is a point of first wear and it must remain without any dulling of the metal. Looking further, the cheek above the mouth is nicely contoured, no flattening and Jefferson hair shows full coverage of luster. 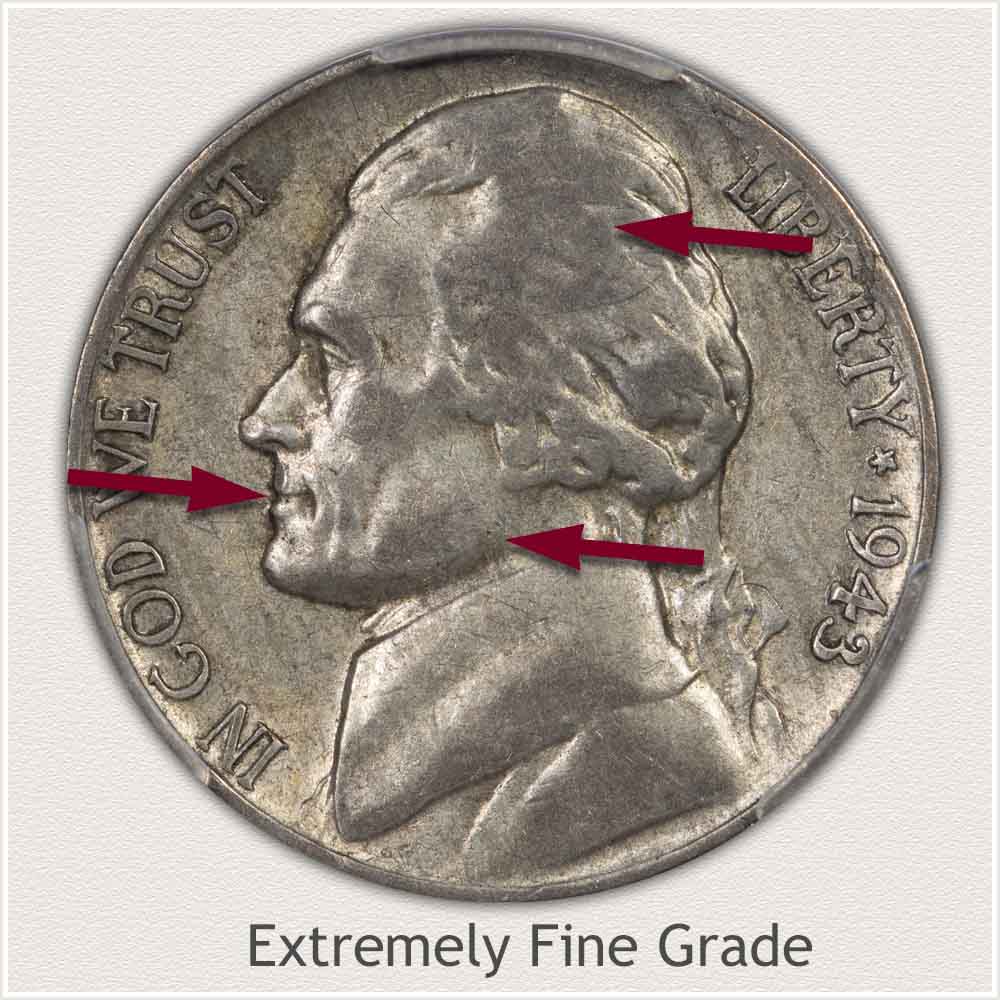 Extremely Fine: Once a coins begins to wear the amount is important because of the detail removed. Defining the Extremely Fine grade is light wear with all major detail intact and finer details just lightly smoothed.

Jefferson's portrait is deeply contoured; many areas are very high in relief. Notice the separate contours just behind the mouth. Just light wear is visible on the high areas causing a small flatness and color change. His jaw line now shows a flat area as well as the cheek above. Only minor amounts of metal are worn and these areas do not connect.

Overall, the crisp details of the hair and lettering are bold and the coin exhibits a pleasing appearance. 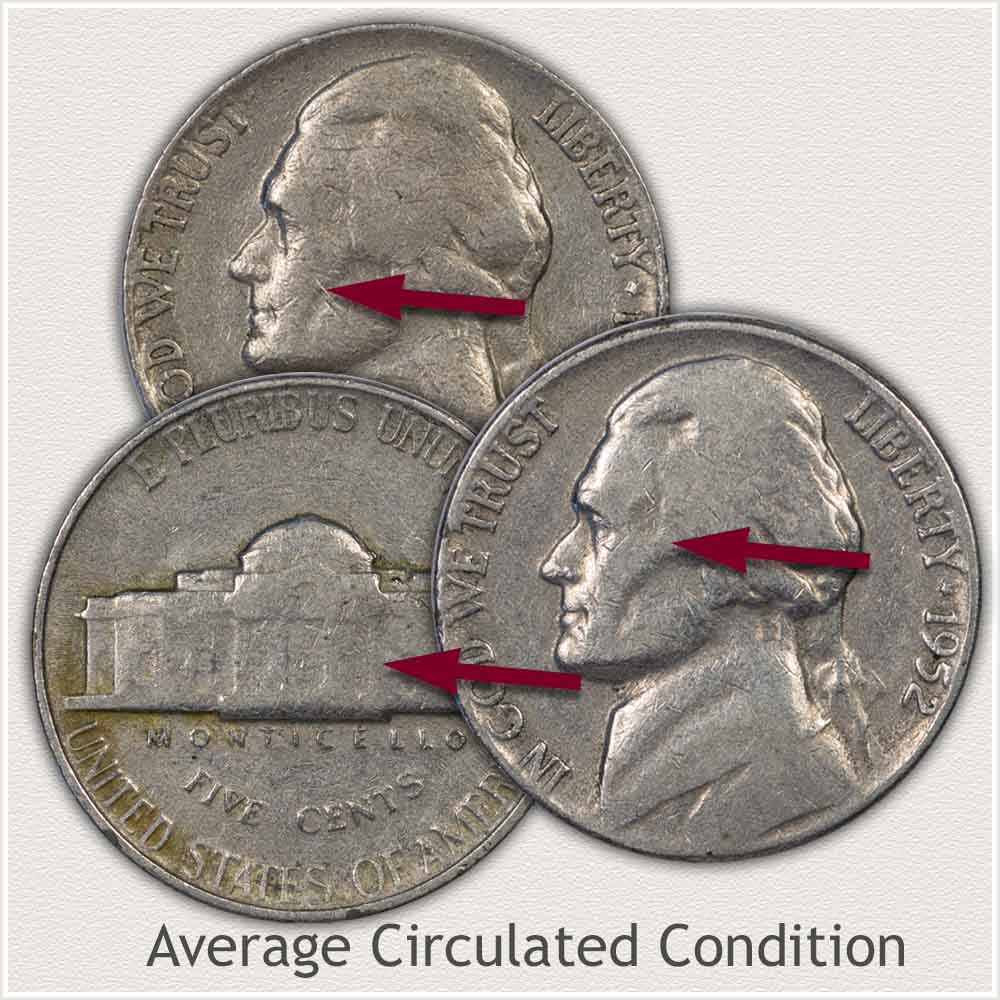 Average Circulated Condition: As these vintage Jefferson nickels wear to the point of merging major details they fall below the Extremely Fine grade. The majority of nickels from the 1940's are in this moderate to heavy wear condition.

A standout feature is the cheek just behind the mouth is missing the small contours. Jefferson's cheek near the mouth is connected with both the jaw below and profile of the cheek above. Notice the continuous flat area connecting all.

Monticello on the reverse is very faded. Columns are faint, and edges of the building are merging with the roof lines.

Grading old Jefferson nickels is explored in greater detail with video and images.

A Small Lack of Symmetry Error

Notice the small area missing from the outer edge of the examples. This error occurred as part of the minting process, when strips of metal are first punched into blank disks. During this stamping the strip of metal failed to advance properly causing the misalignment to punch a small portion of an existing blank.

In the specialized field of error collecting these coins with the missing curves along the rim are known as a clipped planchet error. Planchet, is the mint terminology for the blank disk that is later struck into a coin. The missing or "clipped" area can vary in size and in most cases is curved. In some instances, the clipped portion is straight or jagged, depending on its placement along the original metal strip.

Clipped planchets are an insight to the minting process and the technical perfection needed to produce millions of identical coins. Collectors value the coins by the size of the clipped area, its location, and condition of the coin. A large clip through a coin leaving the date and an aesthetically pleasing portrait is popular with collectors. Clipped areas removing the date or parts of Jefferson's face are less favored.

Spot a clipped planchet Jefferson nickel, set it aside as a possible premium nickel.

A key to Jefferson nickels and values is condition of the coin. Special attention is given to grading using images to compare and identify condition. Value charts now highlight the dates and mintmarks with premium listings.

Jefferson nickels and your 1947 nickel value are part of the long running five cent denomination. Find value charts and step by step methods to determine how much the older series of Shield, Liberty, and Buffalo nickels are worth.

Value charts, along-side grading images and using a step-by-step process; identify the potential of your coin.

Placing a value on a coin collection is done by following a step-by-step method. Each series is identified with images, important dates are highlighted. Grading condition, one of the important steps is accomplished with images of grades to compare. An organization of your coins is part of the process.

All old U.S. coin values. Index listing with images of the different coin series. Match your coins and follow the link to in-depth values. Charts, grading images and a step-by-step procedure uncovers how much your box of old coins is worth.