The Denver mint variety is the leader in 1939 nickel value. Mintmarks identify the different mints and Denver issues are scarce today. Using the first step in a step by step process identify all varieties.

Narrowing the range of how much these coins are worth is an understanding of condition. Finding your high premium, better condition examples, as you compare to grading images and descriptions.

Three main varieties of nickels were struck at the different mints in 1939, all important to recognize. With condition also an important factor, proceed through the steps below to narrow the range of your coin on the value chart.

All U.S. coinage is dated according to the year struck. Additionally, mintmarks are used to identify the branch mint striking the coin. Each issue is valued separately because of different numbers produced by the mints and availability today. Confirm the exact date and mintmark to determine an accurate value. 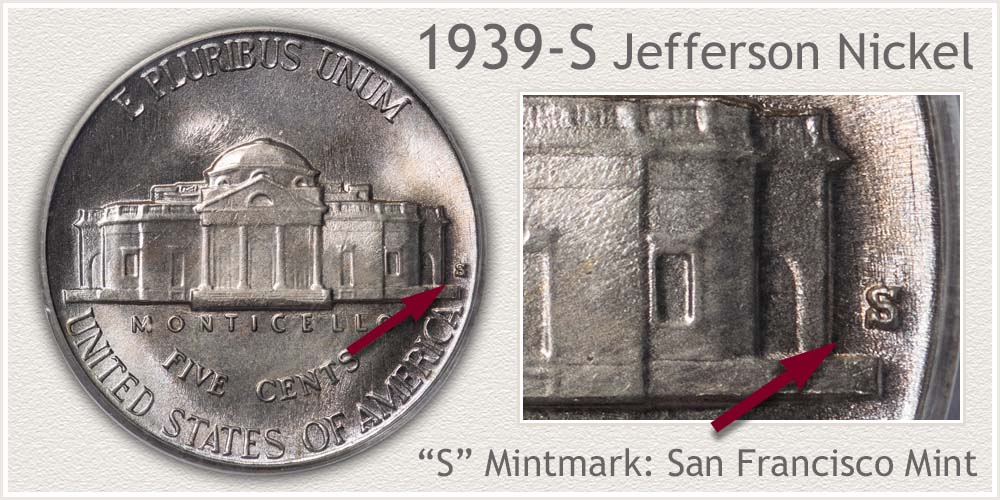 San Francisco mint Jefferson nickels of 1939 are noted as the fourth lowest mintage of the entire Jefferson series. This alone guarantees interest of collectors. With a small 3.5 million minted, availability is limited and the date and mint variety is worth a premium in all grades.

San Francisco mint used a small "S" mintmark to identify their coinage in 1939. Look on the reverse at the left side of Monticello, an "S" between the building and the rim is a San Francisco nickel.

Mintmarks combined with condition is the process to identify how much these Jefferson nickels are worth. 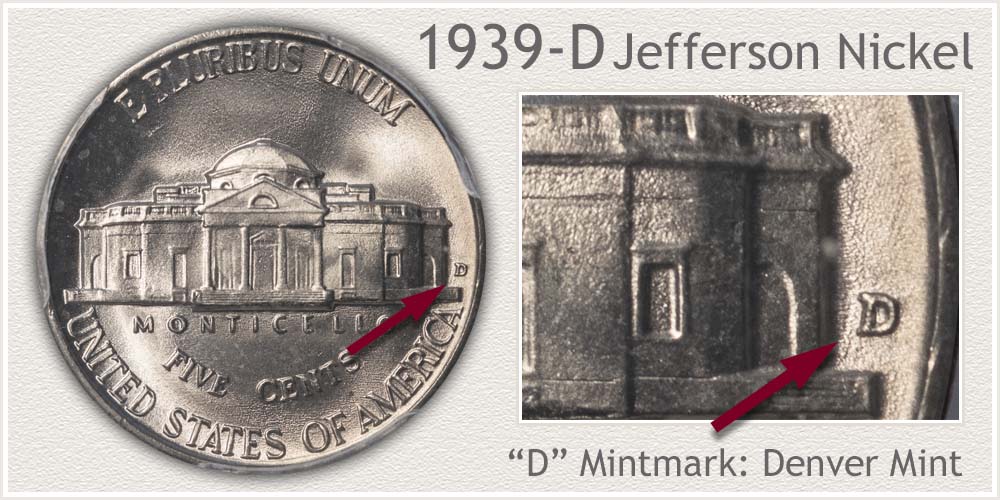 Finding the "D" mintmark holds the key to premium value 1939 nickels. The Denver mint is a branch mint tasked to supplement production of coinage as needed throughout the central U.S.

1939 production of nickels from Denver amounted to just 3,514,000 pieces. This a very low amount, now stands as the second lowest of any variety of the entire series. Today 1939 nickel value is also leading the series. Collectors place a premium on all conditions of the coin.

Mintmarks on Jefferson nickels are found on the reverse, left of Monticello, near the rim. Denver mint is indicated by the "D" mintmark. 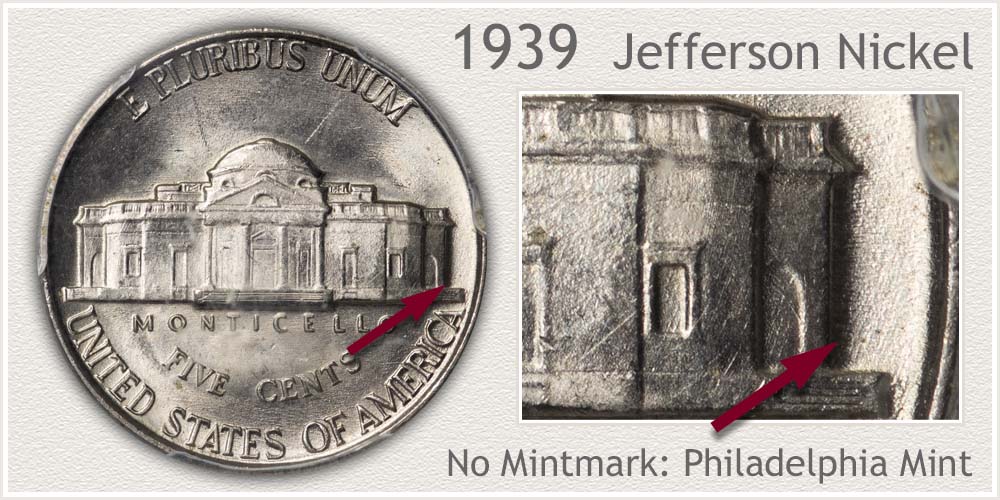 Second year into the Jefferson series saw the Philadelphia mint strike 120 million nickels. This large quantity helped establish the Jefferson design alongside the Buffalo nickel. 1939 Philadelphia nickels are Abundant on a rarity scale, many are available.

Eye appealing coins in lightly circulated or better condition are pieces favored by collectors. A nicely detailed Monticello on the reverse is a collectible coin.

Philadelphia mint variety nickel does not have a mintmark to indicate the mint. On the reverse, at the left side of Monticello, the area shows no mintmark, confirming Philadelphia struck the coin.

Stages of wear to a coin's surface are defined by grades. Ranging from Mint State to Good grade, a heavily worn example. Identifying a grade narrows the value of 1939 nickels. Details of the design is used in grading as well as presence of luster to help spot the differences in condition. 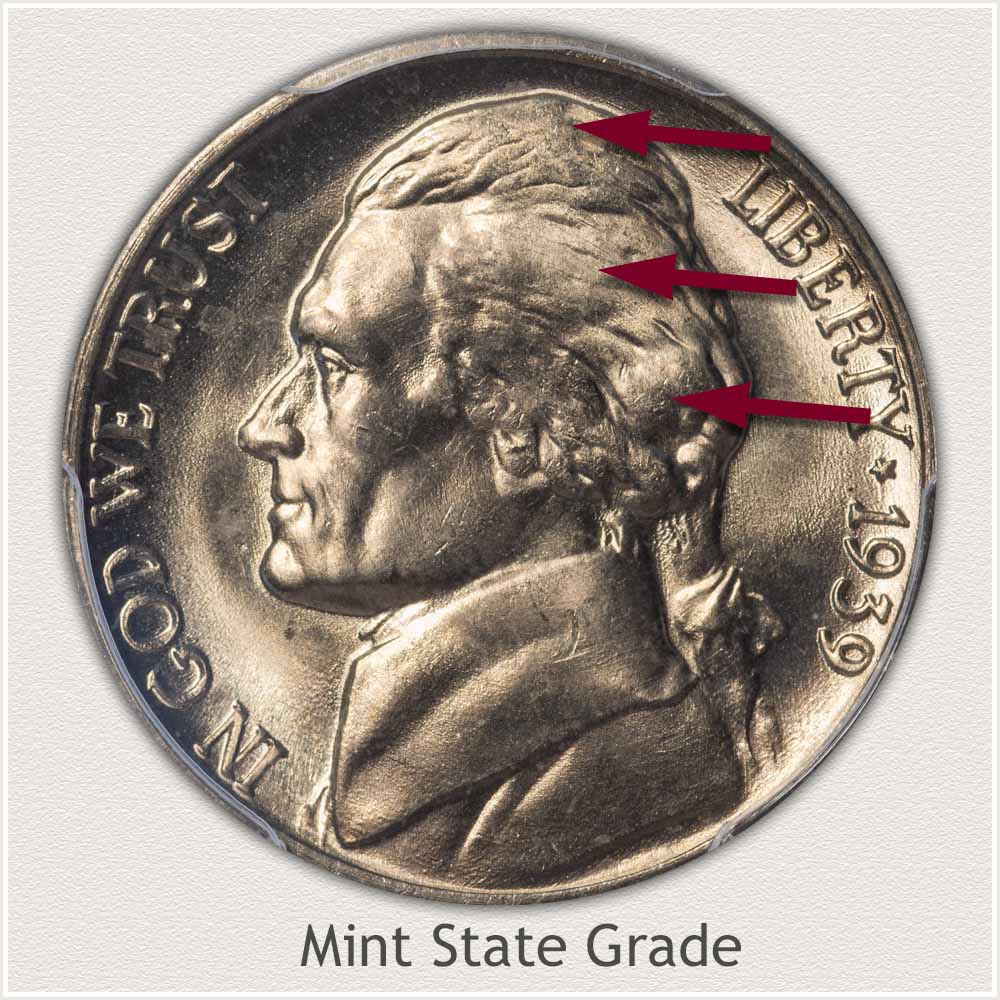 Mint State Grade: A mint state nickel is notable for the complete coverage of luster. As minted, a coin without wear shines because of the fine texture of luster giving to a coin. Disrupt luster with wear and dull areas are the result.

Jefferson's portrait is distinctive by the very high profiles and deep recesses of his face and hair. If a coin has circulated and is worn the highest points are smooth and dull in appearance.

In the hair of Jefferson, through the center is inspected for any smoothing of the metal and loss of luster. This high area remains with a slight texture on a mint state coin confirming the grade. Tile the coin under a light to see the luster and original surface as minted. 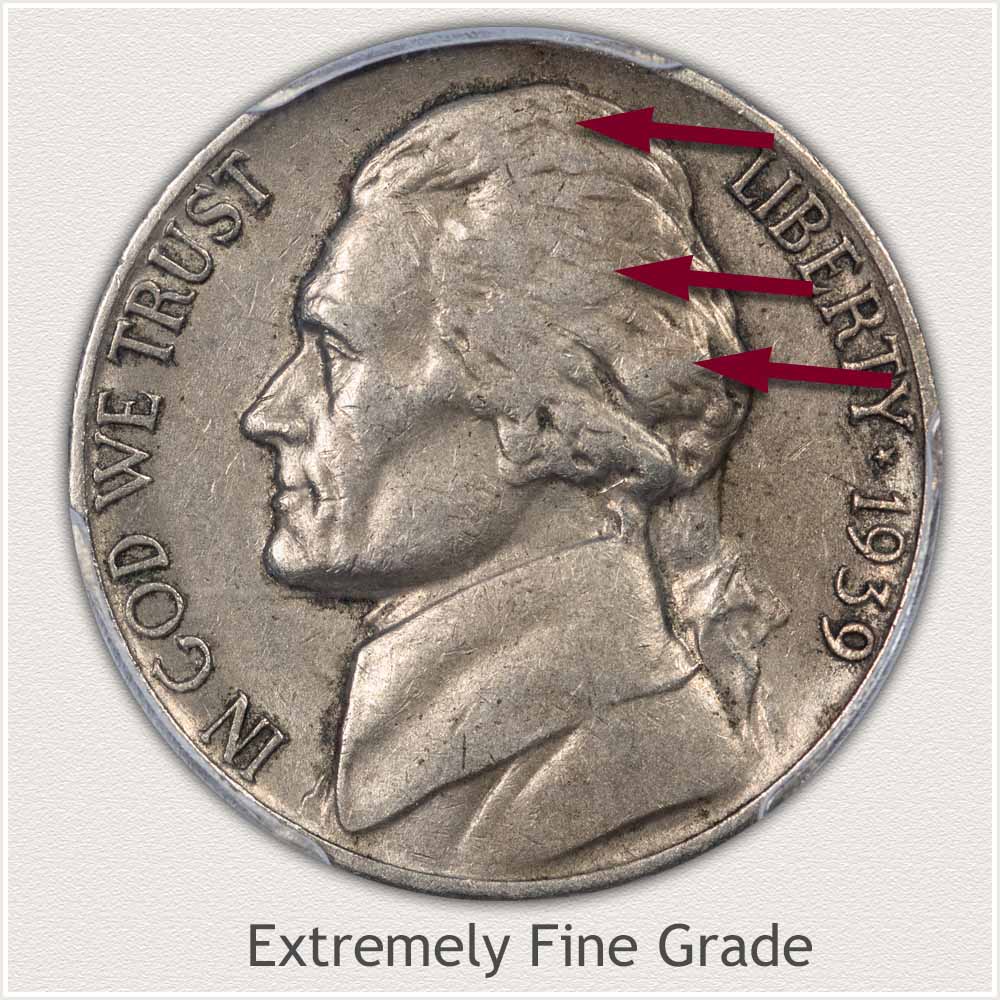 Extremely Fine Grade: With a small amount of wear, most luster is gone and visible smooth areas are on high points. Light wear is the defining metric to the Extremely Fine grade.

Inspecting Jefferson's hair, most areas remain with the small deeper lines to the hair showing. In the center of the hair a small smooth area has formed and is flattened in appearance. Often the flat area of hair is slightly different in color, the result of a smoother surface.

Overall a sharp and crisp nickel is presented. 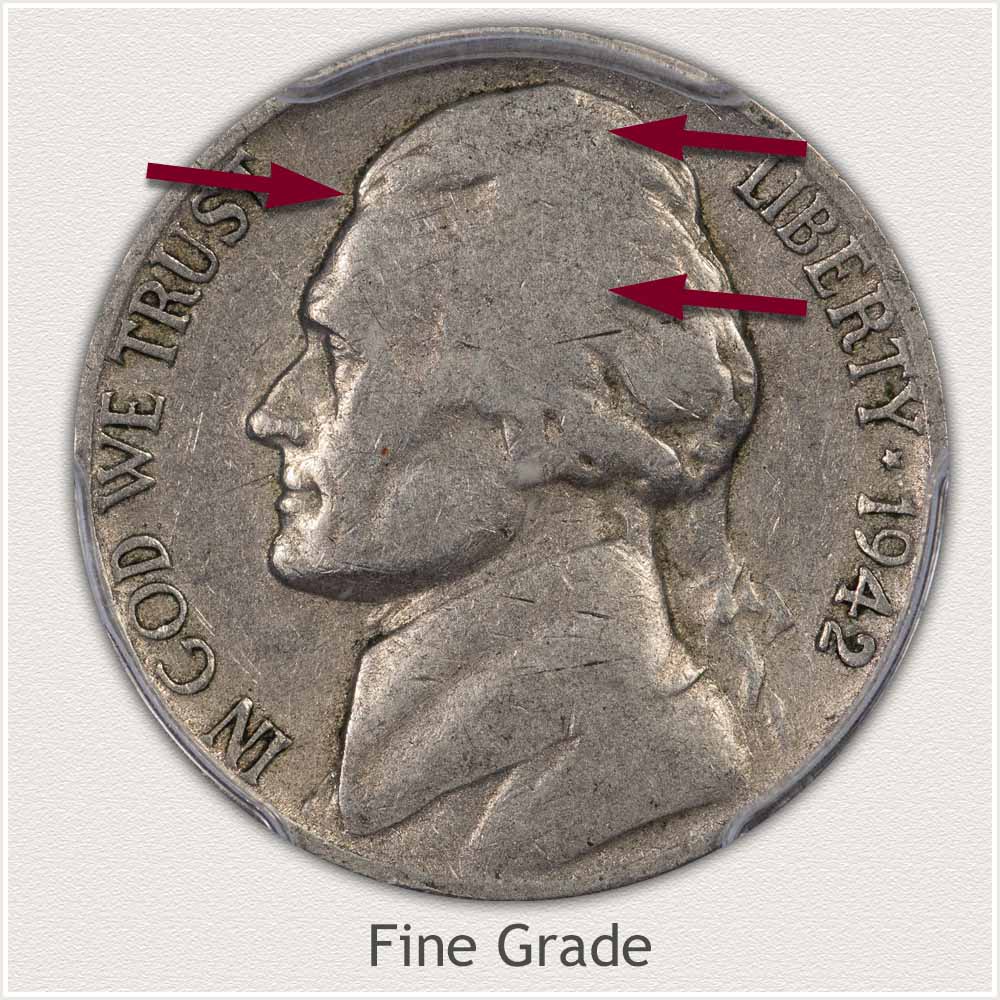 Fine Grade: Wear is clearly visible on a Fine grade nickel, however, limited to only the high areas. Major contours remain within Jefferson's face and back of head.

The central part of the hair is now a completely smooth area. Defining the condition is flatness is continuous from his ear to the top of head. The line separating the hair from forehead is faded and missing in places. 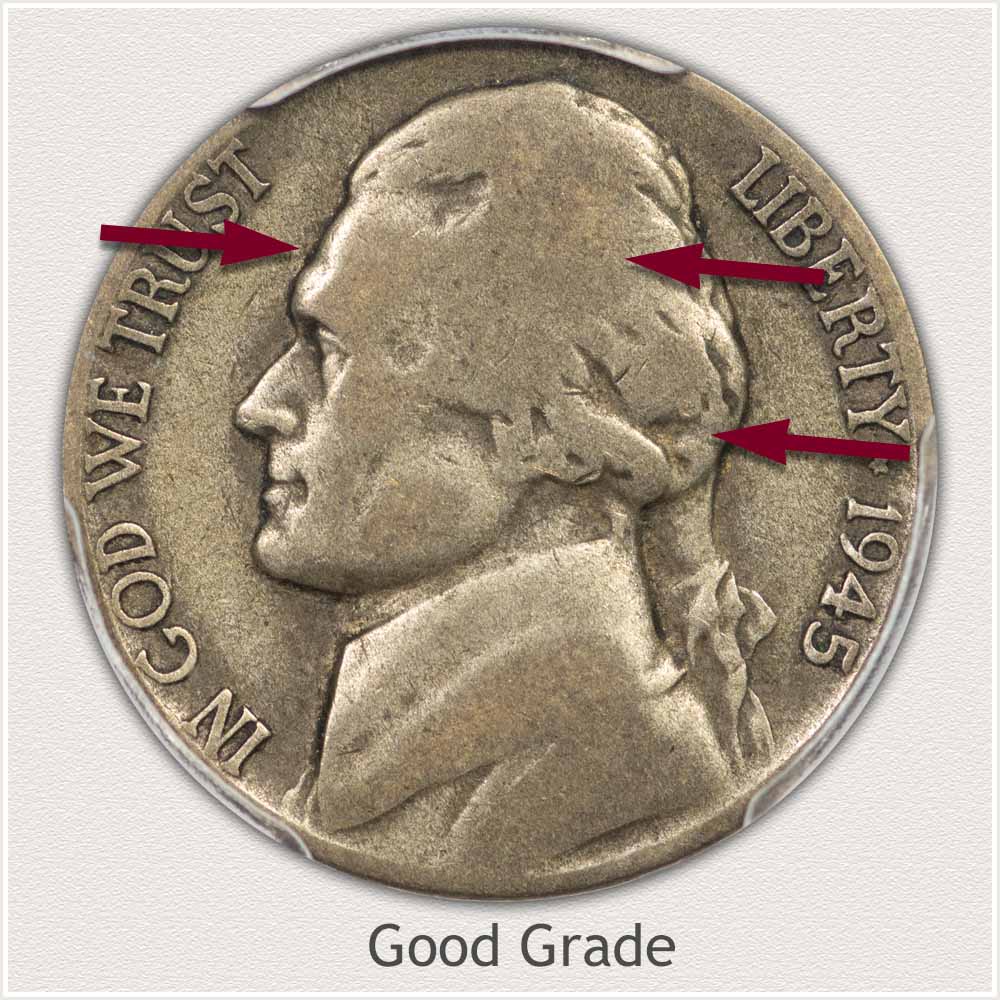 Jefferson's hair is now one smooth, flat surface. Only the deepest details towards the back of his head remain within the hair. His cheek is fully connected with the hair with no evidence of separation. All areas above the eye are now flattened by wear.

Lettering and date are readable. A small connection of the tops of letters and the rim is possible in places. Despite the amount wear, a clear and somewhat bold portrait of Jefferson remains.

The above images are often all that is necessary to recognize the condition of an old nickel and determine a narrow value range. A further discussion of grading is found on the following page. 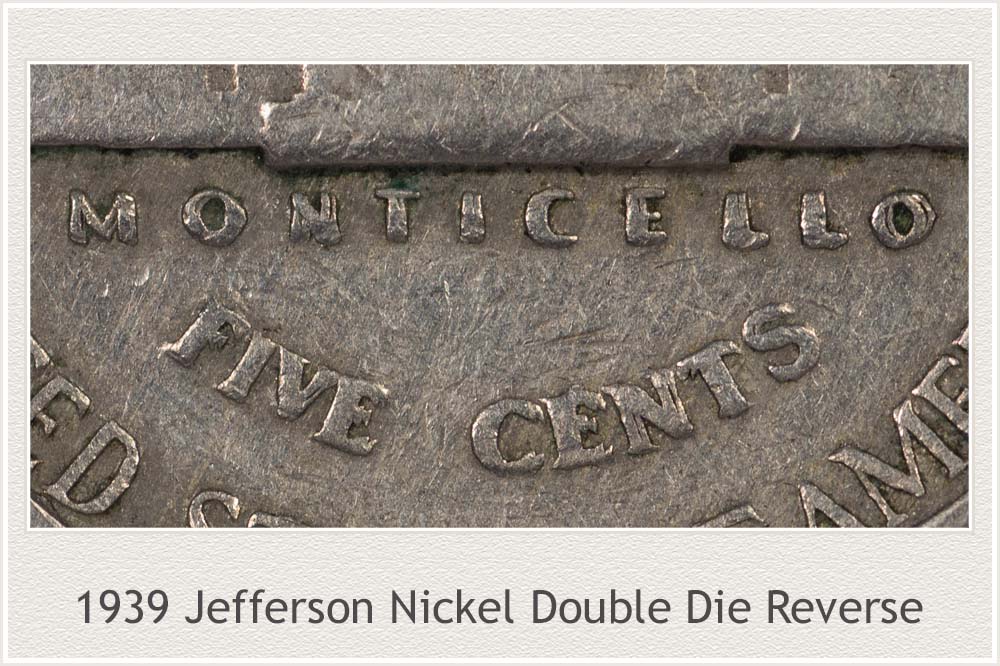 Die doubling is a high-level error variety. It is a visual error where design elements are repeated next to each other creating a doubling effect. In the case of the 1939 nickel, letters on the reverse are slightly offset with the doubling look.

What makes this an important, high-level error is the doubling of the letters is on, and part of, the die. These working dies, used to strike coins, are expertly prepared. Although many working dies are required to strike the millions of nickels per year it is rare for any differences from one die to the next to occur.

Found on the 1939 Philadelphia minted nickel the distinct doubling of the letters of Monticello and Five Cents is easily seen and very dramatic, lending to the appeal of the error coin. Notice the pronounced doubling of the "O" of Monticello, the "VE" of FIVE and "CEN" of CENTS. Each have strong separations. Using magnification, many letters exhibit doubling although less pronounced.

Interest by collectors has remained steady and continues, they have named the error "Double Monticello". A popular error variety, easily seen, and is possible to find among circulated examples. Many are known in worn condition attesting to time in circulation without notice.

Jefferson nickels and your 1939 nickel value are part of the long running five cent denomination. Find value charts and step by step methods to determine how much the older series of Shield, Liberty, and Buffalo nickels are worth.

Rare nickels, for example, ones with a slight doubling of letters, occasionally "hide" in your box of old coins. Scarce dates and mintmarks are listed with how to identify. High quality nickels are also in favor with today's collectors. Many nickels have become rare because of age and lack of availability.

A quick reference to U.S. Coin Values. Images to identify each coin series and minimum values are listed for each type. Links lead step by step methods and how much these old coins are worth. Bookmark the Mobile Guide to your phone.

All old U.S. coin values. Compare your old coins to an image index to identify all U.S. coin series, from Cents to Gold. Value charts, grading images and a step by step procedure uncovers how much your box of old coins is worth.