Quality of surface and strength of design determines 1958 nickel value. Approaching the end of the 1950's numbers of nickels struck by the mints began to vary considerably. Date and mint combination represent an opportunity.

Collectors use a few steps to judge the value of coins. One of the steps is noticing the difficulty of finding quality examples. Vintage Jefferson nickels are beginning to show the lower mintage varieties as less available and have future potential to premium value.

Proceed through the steps to how much these vintage Jefferson nickels are worth.

A full value review of a coin must include an accurate identity of date and mint variety. All coins are listed on the chart by first date and then mint that struck the coin. These represent two distinctly different coins, each with unique value factors. 1958 Jefferson nickels minted at the different mints were produced in vastly different numbers.

To complete the assessment of value the state of preservation of the coin is closely inspected. In Step 2 below, comparing your coin to images begins to show the level of preservation and highlight the condition awarded premium value.

Two mints produced 1958 nickels, both with different mintage numbers. Today these two varieties are similar in premiums, ample supplies remain. Condition of the coin is the current factor to value. Over time the small original mintage struck by Philadelphia is possible to have an impact on value.

An accurate identity of the mint issue 1958 nickel is necessary. 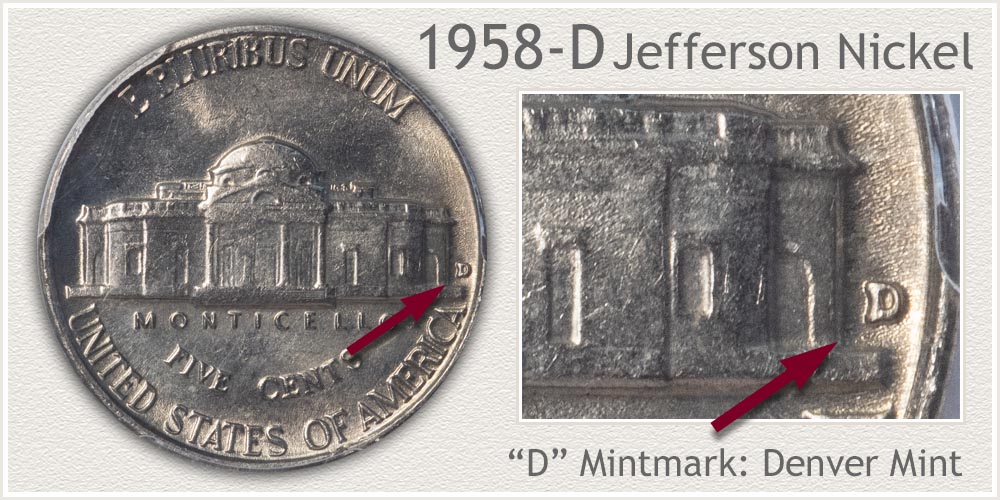 Demand for the 5-cent denomination in commerce was met by the Denver mint striking over 168 million nickels in 1958. These are the likely mint variety found of the 1958 date. Ample supplies remain. Premiums are affordable in Mint State grades and collectors focus their attention on high grade coins.

Denver placed a "D" mintmark on the reverse. Next to the rim, on the right of Monticello a small "D" is a coin minted at Denver.

The Philadelphia mint produced a moderate number of nickels in 1958. Just over 17 million; becoming the fourth lowest Philadelphia mint variety of the entire series. Collectors notice these low mintage years with an eye towards scarcity. Today, premiums are in the developing stage; ample supplies remain holding values steady.

Philadelphia did not use a mintmark to identify production. The area reserved for branch mintmarks is empty on Philadelphia nickels of the 1950's. Looking on the reverse, at the right of Monticello, no mintmark confirms the Philadelphia issue.

Levels of preservation are judged in the grading process. Newly minted nickels display luster covering the surface and worn coins display various amounts of wear. The amount of remaining original design and metal is determined by comparing to images typical of standards for the grades.

Inspect the condition of your coin alongside the example images finding a close match. The subtle points to each grade are highlighted. 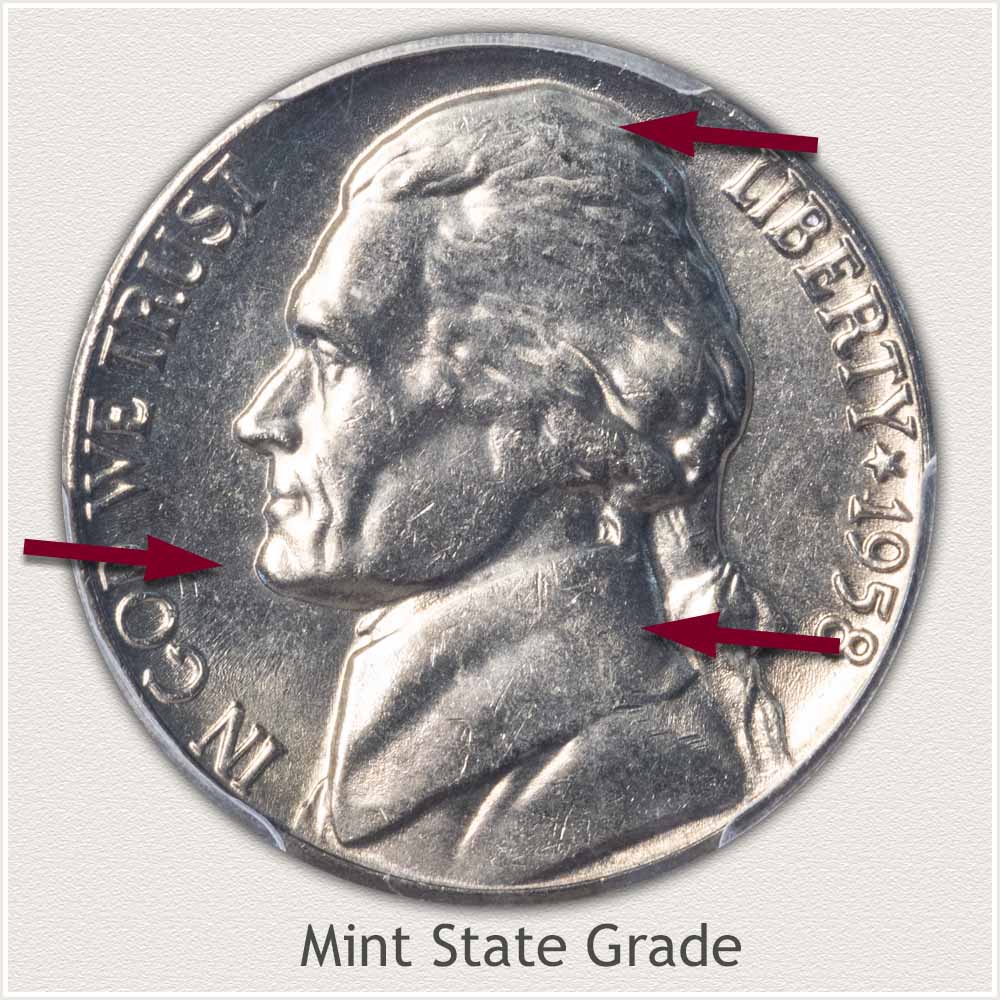 Mint State: A newly minted coin shines with luster and displays a fine texture imparted as the result of the intense striking pressure during the coining process. Luster remains with a coin as long as it is not handled and used in commerce. No wear to the surface is the definition of a Mint State coin.

A nice feature of the example 1959 nickel imaged is the strong strike bringing out the small lines in the hair and bold contours of the face. All surfaces remain with the original fine grain texture of luster.

At the top of Jefferson's head, no signs of smoothing of the metal and removing of luster is seen. His hair overall is consistent with the shine and radiance of luster with no dulling. A second feature is the chin below the mouth, a high area of the coin and first to lose Mint State luster. Jefferson's chin is nicely contoured, no flattening from wear and remains lustrous. 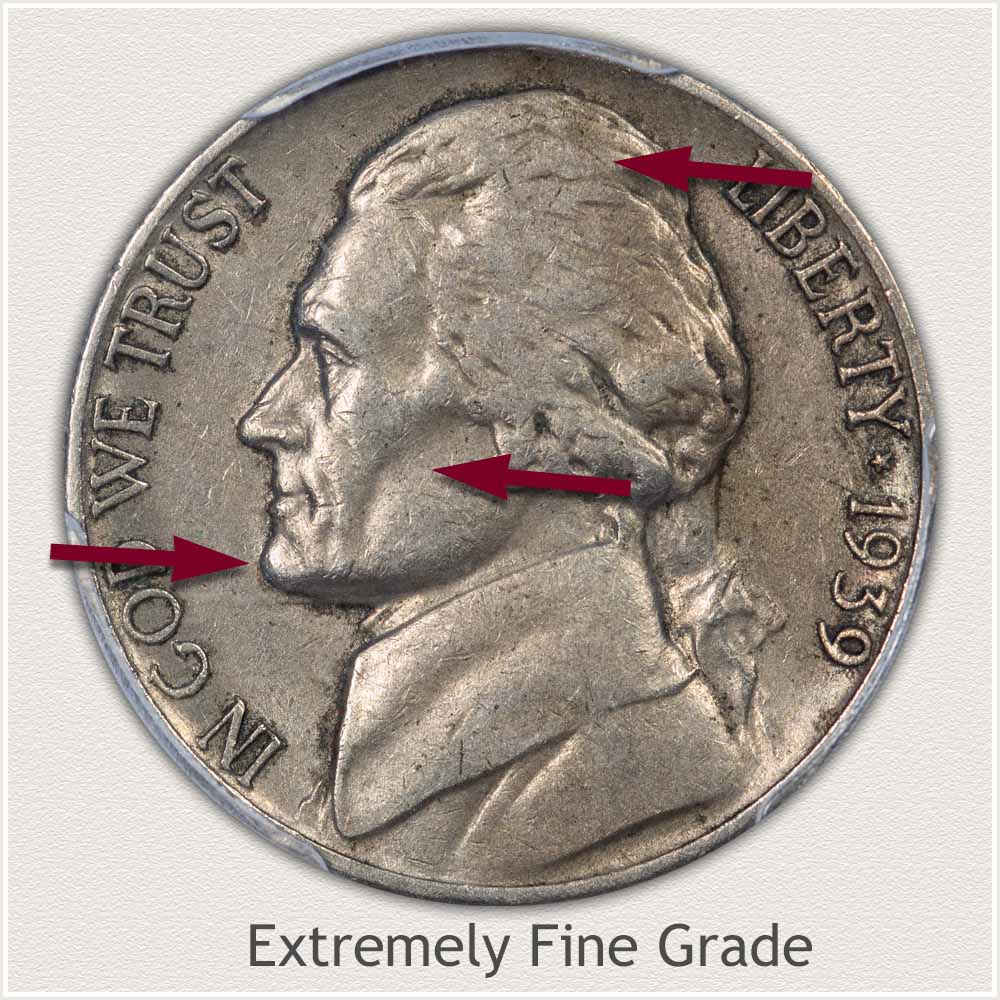 Extremely Fine: A coin in use quickly dulls and the shine of a newly minted piece is lost. Light wear, scattered across the high points identifies an Extremely Fine grade condition.

Towards the top of Jefferson's head; the hair is just beginning to show early stages of wear reducing the height of the design. Smoothing has dulled the metal, shine is gone, and small flat areas are visible. Important is the separation of flattening into disconnected points.

The chin below the mouth is lightly worn, a dullness has replaced the shine of a new coin. Traces of flatness are found at the very front edge of the chin and continues along the jaw line to ear. Boldness of the facial features remain; separation of the cheek and jaw is very distinct. 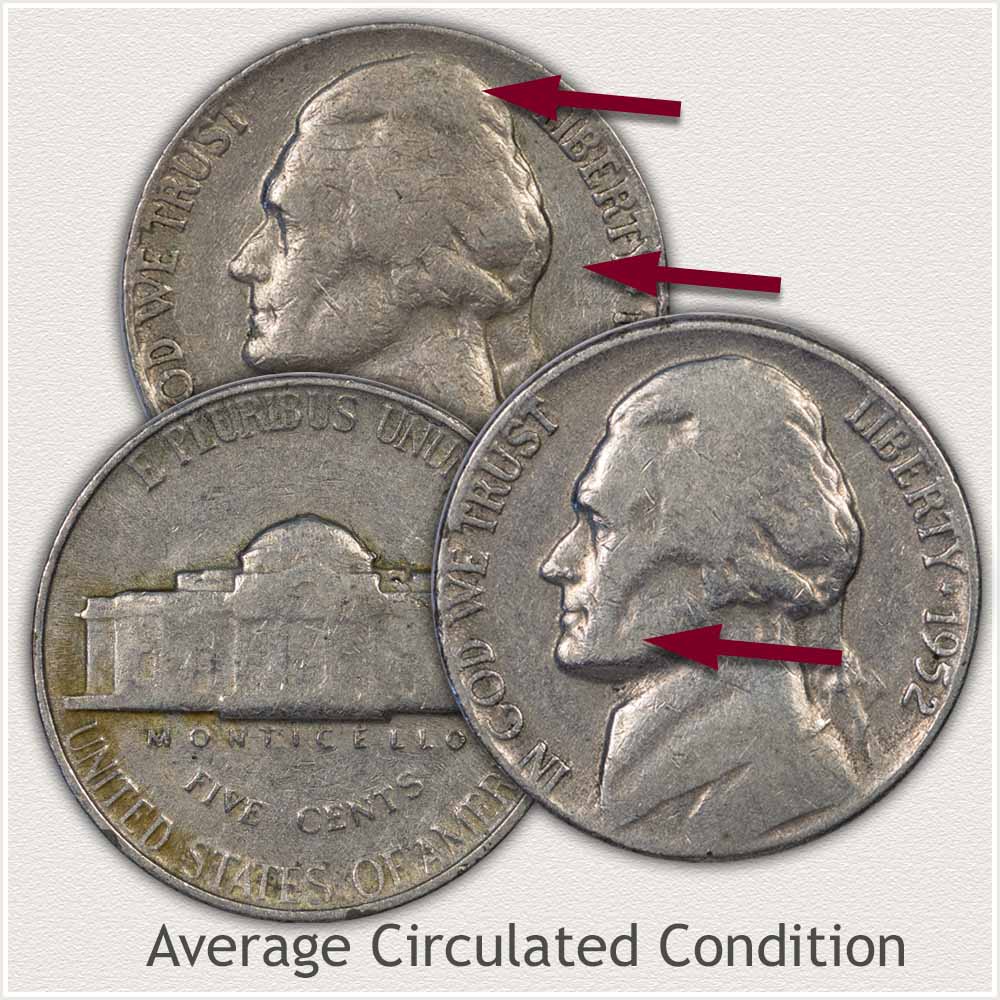 Average Circulated Condition: Eye appeal is the important feature a collector considers when choosing a nickel to add to a collection. Quality coins are the few above average examples from the many moderately to heavily worn coins typically found.

The majority of nickels remained in circulation and lost most the fine details due to wear. Removal of metal is evident on the examples displayed as wide smoothness throughout Jefferson's hair. Most fine lines are missing and very little detail shows towards the back of his head.

Jefferson's chin below the mouth is visibly flattened and connected to the jaw and cheek above. The once boldly raise features of his face are reduced and merged into flat areas. Eye appeal is reduced and low condition coins trade at low premiums.

Grading is continued with video and images of both obverse and reverse designs. Highlights of the subtle points to condition are examined.

Recognizing a Lamination Error and its Value

It is not often a coin with "problems" emerges from the U.S. mints. Minting coins is a complex process, beginning with raw metals to design perfection to exact striking. An occasional flaw in one of these many operations is transferred to the coin and is recognizable.

Creating the metal alloy is the beginning of the coinage process. Nickels are a mixture of 75% copper combined with 25% nickel. During the melting, casting into ingots, and rolling into stock for coinage, on occasion an incomplete mixing of the alloys occurs.

Looking at the example nickels, cracks and peeling of small portions of the metal is seen. The working of the metal during the rolling and striking of a coin has exposed flaws and resulted in a "lamination" error. Metal has split apart and can show as cracks into the coin's surface as well as thin areas rising away from the surface.

These "lamination" defects are considered by some collectors as lowering appeal. Other collectors seek lamination errors as part of a collection of error coins.

When scanning your nickels and a defect of peeling or cracked metal is found, note the overall appeal. They represent an interesting insight into the minting process and the challenges of producing millions of top quality, precisely identical coins.

Early era Jefferson dates standout with premiums, silver issues have enjoyed premiums over the years. Value chart lists all vintage nickel values. Follow the step-by-step method and determine how much all your old nickels are worth.

Jefferson nickels and your 1958 nickel value are part of the long running five cent denomination. Find value charts and step by step methods to determine how much the older series of Shield, Liberty, and Buffalo nickels are worth.

List your Jefferson nickels and record their values. Create an inventory of your coins. Use the step-by-step method to place a value on all coins.

Coin values are influenced by popularity. Large numbers of collectors create demand showing in premiums in value. Collecting interests vary and are ranked on charts by denomination and series.

A coin collection is valued using a step-by-step method. Key factors are identified and the coin value guide leads to charts of how much your collection is worth.

All old U.S. coin values. Image and descriptive index leading to value charts. Step by step method to date and variety identification. And grading condition by comparing to images, video and descriptions. Special qualities are also judged. Discover marketability and how much your box of old coins is worth.