Circulated examples of the year are abundant; however, the quality of the coin is the key to 1954 nickel value. Nickels minted in the mid 1950's have distinct traits either raising or lowering the visual appeal of the coins.

As part of the step-by-step process judging your coin, images in the grading section help identify the standout quality with possible added premium.

1954 is an available year with ample quantities struck. Finding an example from the year is not difficult. The scarce nickels, carrying a premium value, are those remaining in nice condition, featuring crisp and bold design details.

A few steps are needed to identify date and mint variety and the collectible state of preservation of these vintage Jefferson nickels.

Three mints continued to strike nickels in 1954. Philadelphia, Denver, and San Francisco produced 5-cent coinage this year, each in different quantities. Original numbers struck, indicating availability, and quality of the coin, are the key factors to value.

Recognizing the mint variety is part of narrowing the range on the value chart. Identify mintmarks to confirm mint striking the coin. 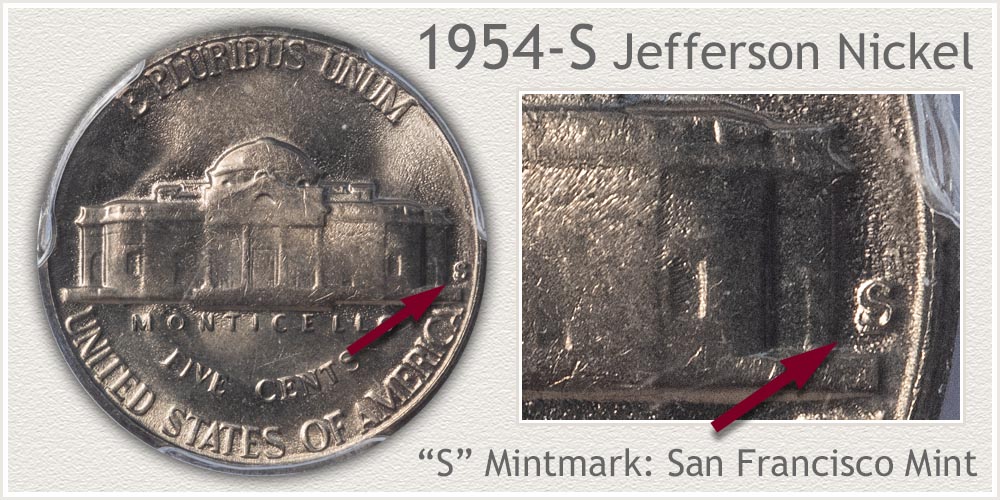 San Francisco mint struck its last vintage Jefferson nickel in 1954. During the 29-year time period 1938 to 1964; San Francisco struck nickels in 17 of the years. In its final year striking 29.3 million pieces. An important "Last of" issue to collectors.

An "S" mint mark on the reverse is the mark used by San Francisco to identify the mint. Looking on the reverse, to the right of Monticello an "S" is placed near the rim. 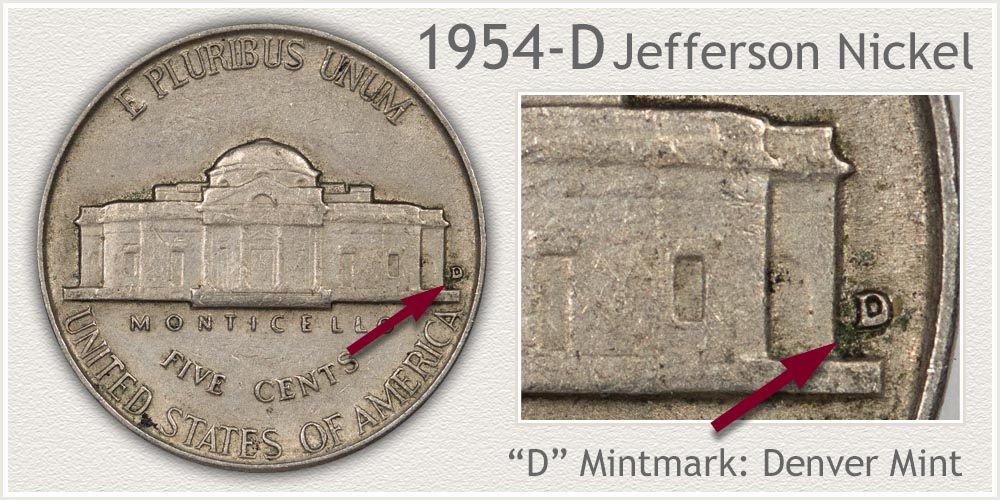 1954 is the first year Denver struck over 100 million nickels, striking 117,136,560 in total. Ample quantities remain today, however, most are in moderate to heavy wear condition. These coins were not removed from circulation in large quantities early, the majority circulated for many years. Lightly worn to better is the preferred condition by collectors.

Denver used a "D" mintmark to identify production. On the reverse of the coin, along the rim, to the right of Monticello a small "D" indicates the Denver mint variety. 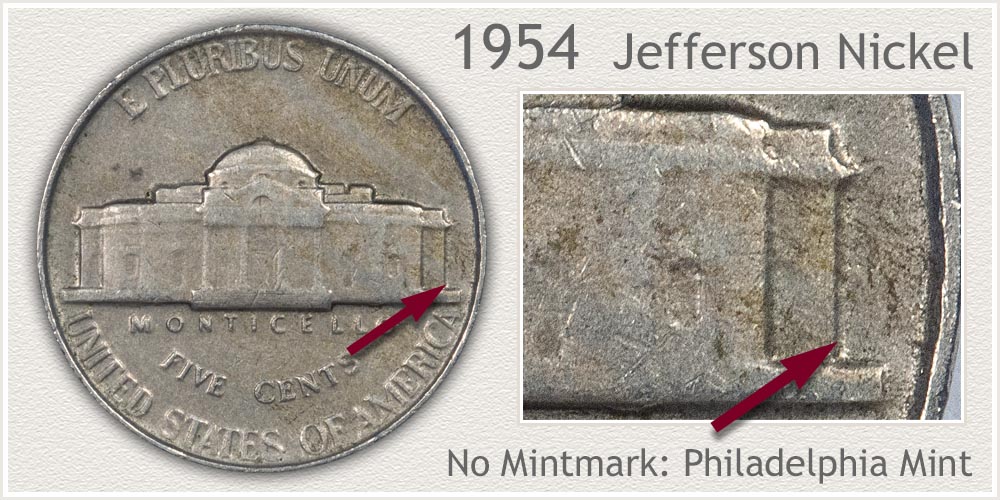 Philadelphia struck just under 48 million nickels dated 1954. This amount results in ample quantities available and low premiums for circulated condition pieces. The attraction of the coin is affordability to new and beginning collectors. Crisp, well detailed coins are sought by these new hobbyists.

Identify the Philadelphia issue by the lack of a mintmark. On the reverse, to the right of Monticello, if the space between the rim and the building is empty, Philadelphia struck the coin.

Grading separates and categorizes coins by the amount of wear to the surface. A Mint State coin with no wear is the top grade and each descending grade represents increasing amounts of wear.

Images of standard grades are used to compare and help narrow the range of conditions. Heavily worn Jefferson nickels below the Extremely Fine grade are typically traded and marketed as a group. 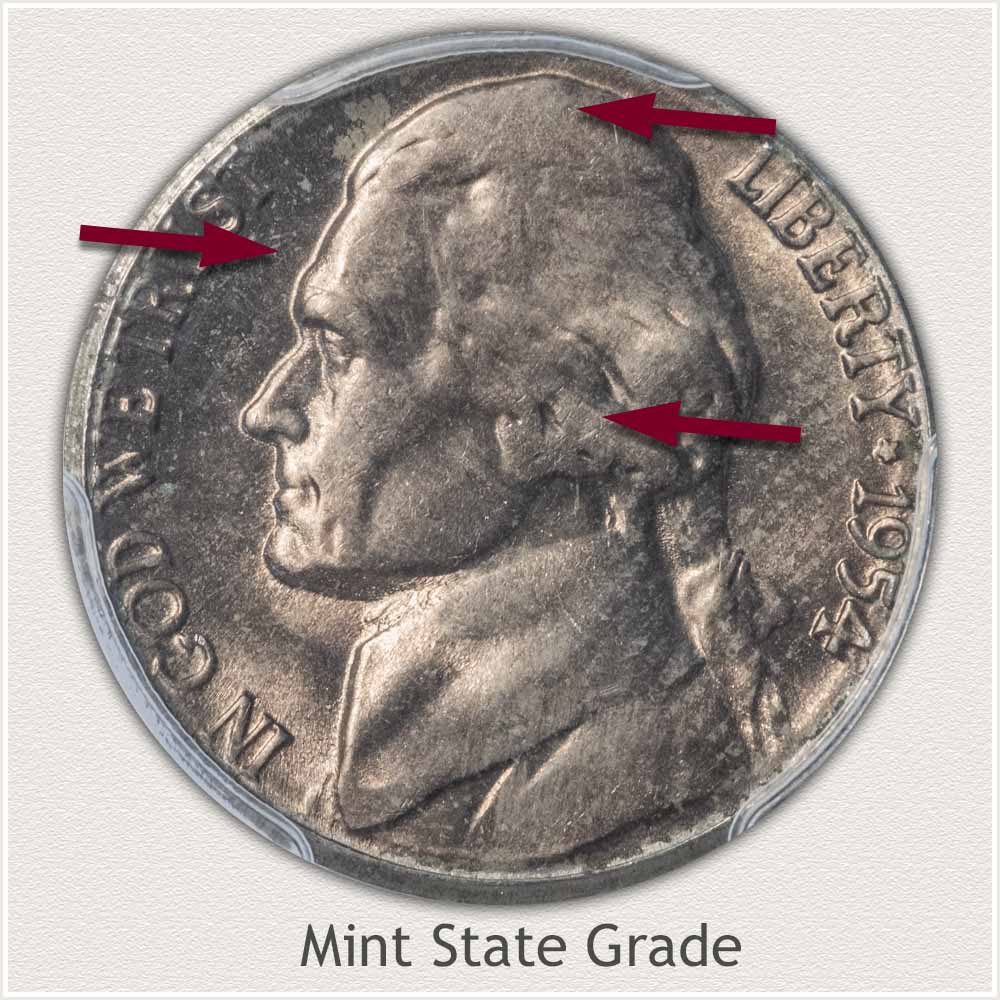 Mint State: Displaying no wear to the surface a nickel becomes a candidate for the Mint State grade. A few points help determine the grade and are inspected to confirm the absence of wear; high areas and changes in luster.

Centrally located and high in profile is Jefferson's eyebrow and forehead. These two points are raised well above the field and covered in luster on mint state coins. If wear is present the first sign is removal of the fine texture. A smooth surface over the eyebrow and change in color of the metal from surrounding areas indicates a slight amount of wear.

Inspect the forehead to confirm similar texture and color as the eyebrow with no dulling of the surfaces. 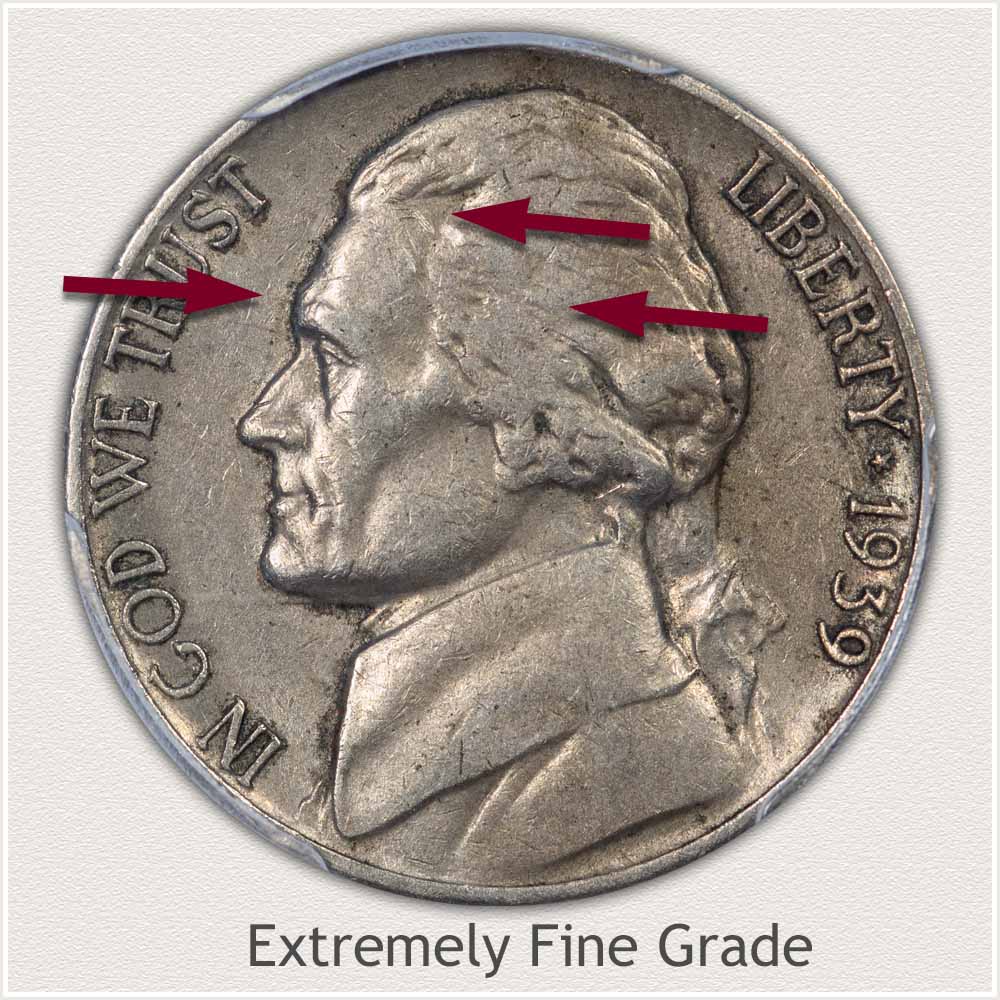 Extremely Fine: Notice on the example coin in Extremely Fine grade the small smooth areas within the hair, face, and coat of Jefferson. Light even wear defines the grade.

Jefferson's eyebrow remains with a slight contour. A smoothness, the result of minor wear has removed the luster and somewhat dulled the surface. His forehead is also showing the smoothness of wear, however very light.

Of importance to the Extremely Fine grade is major design elements in high profile are separated by contours. Wear is slight and no merging of high areas is seen. Detail remains within the hair, cheek and jaw line are separate, and the collar and coat lines are visible. A well detailed design remains. 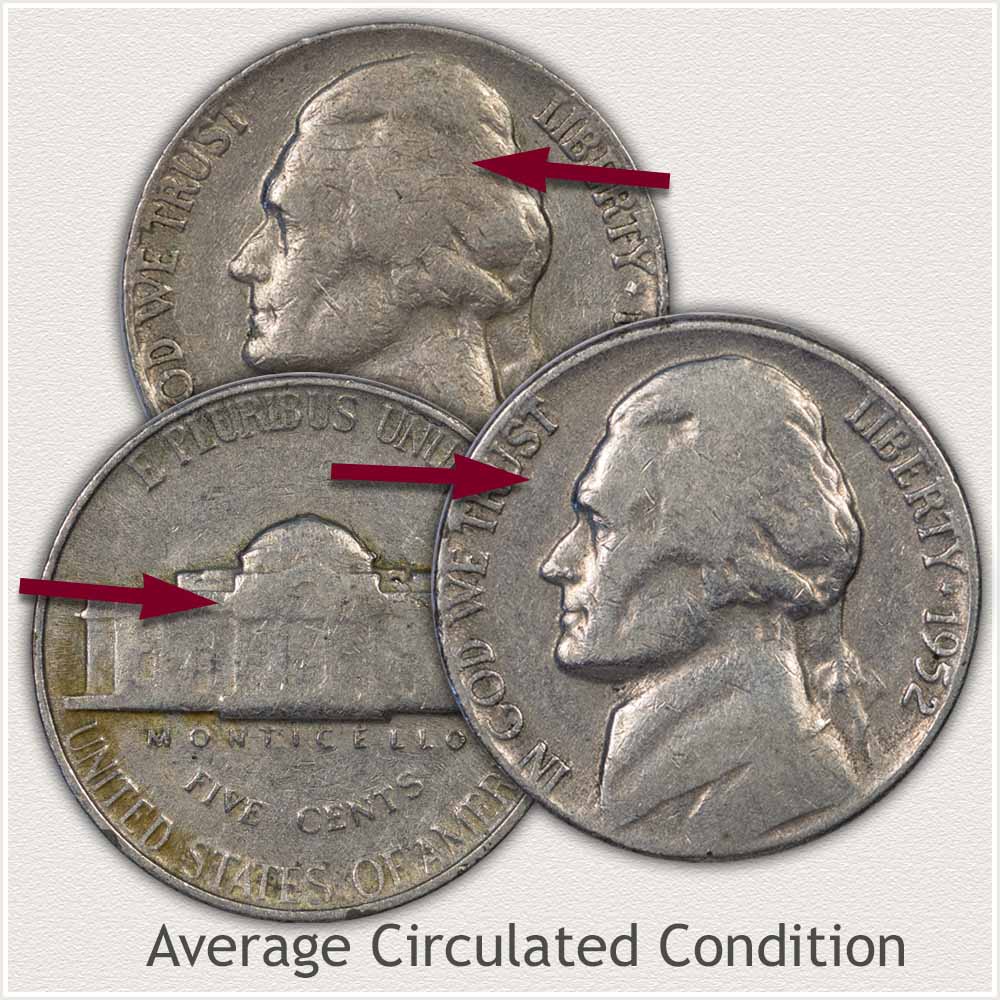 Average Circulated Condition: Moderate wear removing enough metal to cause major design elements to merge together is the typical condition of many vintage nickels.

Displayed by the examples are large smooth areas within Jefferson's hair and across his coat and collar. The eyebrow is now flattened and fully connected with the forehead with no raised contour. Additionally, helping to recognize the condition, is flatness connecting the cheek and jawline with the forehead above. Once rounded and raised areas are now flat and merged on the side of the face.

The reverse shows Monticello with faded indications of columns. Smoothness is the overall appearance of the roof and front of Monticello.

Judging condition of Jefferson is nickels covered in greater detail. Images of the obverse and reverse of nickels in a range of grades are examined in detail.

Within the coin collecting world significant changes to a series of coins has the effect of creating additional demand. Jefferson nickels from the beginning of the series enjoyed three varieties minted each year. Collecting a date and mint set included a Philadelphia, Denver, and San Francisco example of each year.

A major change occurred in 1954 with the San Francisco mint striking the last Jefferson nickel by March of the year. 1954 "S" mint nickels are the end of an era and an important variety to the series.

The San Francisco mint coined cents and dimes in 1955 before suspending all coinage operations. Not closing completely, it continued as a refinery of metals and serving as an assay office.

1954 San Francisco nickels became a historical "last of" issue and in are in continual demand by collectors. Inspect your nickel, alert to the premium status given to high grade and quality pieces. Most vintage nickels are well worn, missing fine details and lack eye appeal. Finer condition nickels are excellent additions to sets assembled by new and beginner collectors, an affordable and important coin.

Early era dates standout with premiums, silver issues have enjoyed premiums over the years. Value chart lists all vintage nickel values. Follow the step-by-step method and determine how much all your old nickels are worth.

Found in the Jefferson series are a few scarce nickels. Earlier nickels, Shield, Liberty, and Buffalo series have a share of valuable examples also. Collectible nickels are sometimes a high condition nickel among a group of coins.

Recommendations on basic supplies that greatly improve coin storage. Providing for safe handling, preserving of value and organizing your box of old coins. Safe storage of nickel coins is as important as copper and silver alloy coins to maintain their preservation into the future.

A quick reference to U.S. Coin Values. Identify your coin by comparing to images along with listings by type. Charts give common date values. See the sections on mintmarks and varieties. Steps also include grading to narrow how much each coin is worth. Bookmark this page to your phone as: Coins Values | Mobile Guide.