Compare to the images of mint marks and images detailing the different grades. A full picture of how to value your coin begins with these steps.

As a popular series, attention to accurate date and mint marks is needed. Values of 1920 wheat pennies have a large range on the chart. Proceed first by confirming date. Dates are collected and valued separately.

Proceed to the section on Condition: How well a coin is preserved is closely inspected and graded. Comparing your coin to the grading images finds a close match.

Three Varieties of 1920 Cents to Identify

Early wheat cents (1909 to 1933) are a popular sub-set to the series. Each variety is inspected closely and valued separately. Identify your Date | Mintmark combination.

With a rarity scale of 1: Abundant; many of these old wheat pennies are around today. Most circulated until very worn. A challenge to collectors is finding nice condition coins. Popularity of these early dates does support a value higher than later year cents even if your coin is in worn condition.

With so many to choose from a superior coin displays uniform coloration no matter the grade. Dark areas and streaks of discoloration often spoil the eye appeal. Your first impression determines the overall look of the coin. 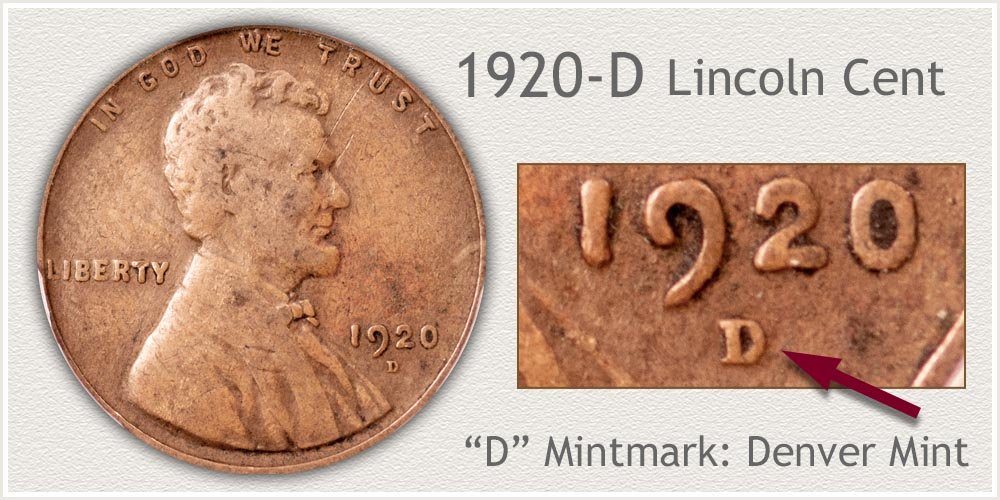 A steady increase in need for minor coinage in 1920 resulted in the mints operating on 24- and 16-hour schedules. This reported by the mints gives insight onto most Denver cents circulated and worn heavily. Note a large increase of value in the Extremely Fine grade.

A quality 1920-D penny is lightly worn or better and bold in detail. Inspect the reverse, crisp lettering along the rim and ONE CENT in the center defines a premium coin. 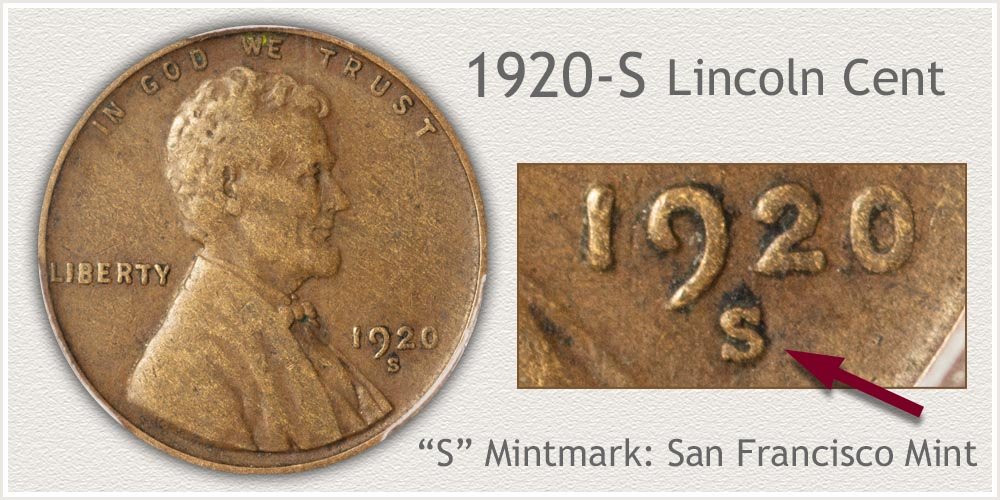 Throughout the history of wheat cents, branch mints are known for striking far fewer coins than the main mint in Philadelphia. San Francisco in 1920 produced less than 1 seventh (46,220,000) the number of pennies than Philadelphia. Usage of the coins was heavy and ones in nice condition are valued at a premium.

Value differences listed on the chart reflect the condition - grade of your 1920 penny. Inspect the amount of wear to the surface and compare to the images and descriptions. A grade is assigned describing condition.

A magnifying glass is helpful to bring small details closer. 5x power is commonly used by collectors when examining coins. 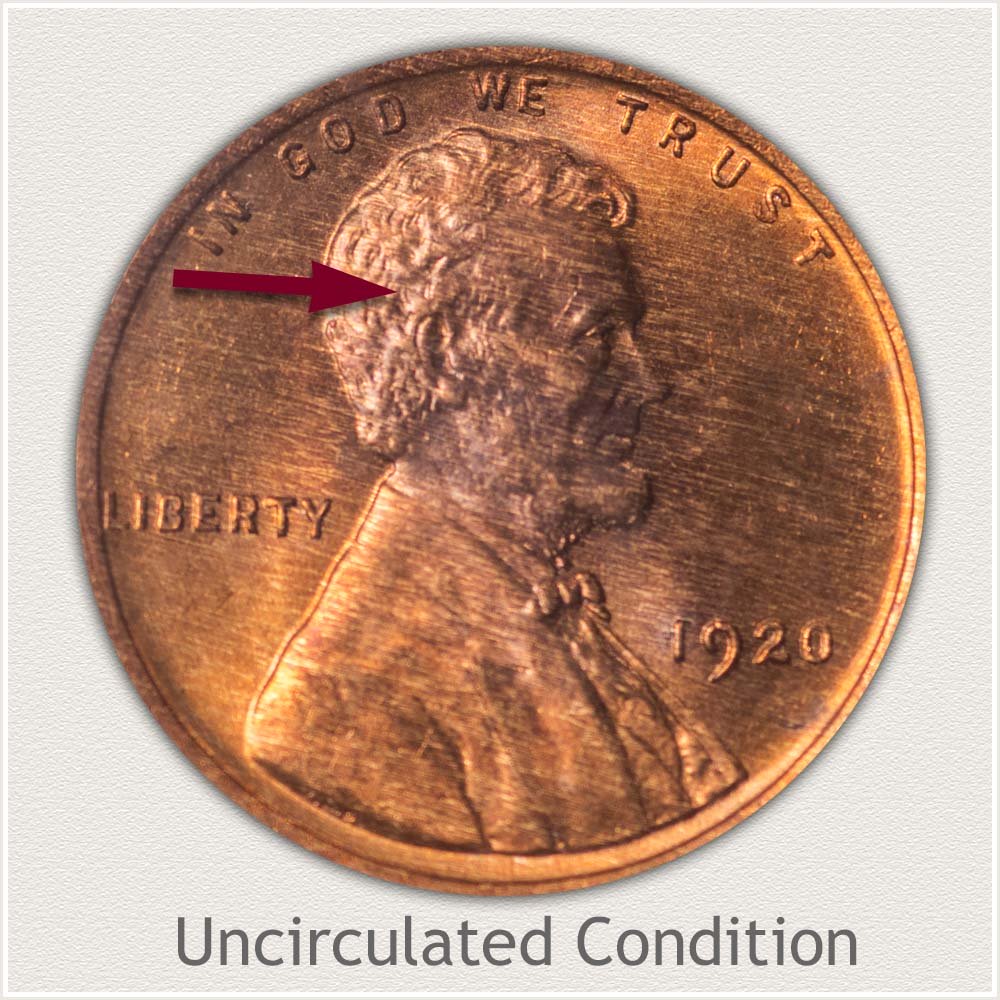 Uncirculated Grade: At the top of collectors want list and value are Lincoln cents in mint state - uncirculated condition. These are coins that never circulated and are as minted. Lack of wear to the surface is the defining factor to reach this grade. As a bonus, remaining original color and shine adds to an uncirculated coin's appeal. One note: toning if present, does not indicate wear.

To confirm the mint state grade, inspect Lincoln's ear and the surrounding hair. Located in the central part of the coin and high in profile his ear and hair are first to show signs of smoothing and loss of detail. Tilt the coin at an angle to judge any change of color and flatness to the high points. Lincoln's ear needs to match in texture the metal over the rest of the portrait.

With the advanced age of a 1920 wheat penny toning is often present on the surface. Shades of reddish brown are first to appear. Noted on the example are subtle shades of toning giving the coin a pleasing look. 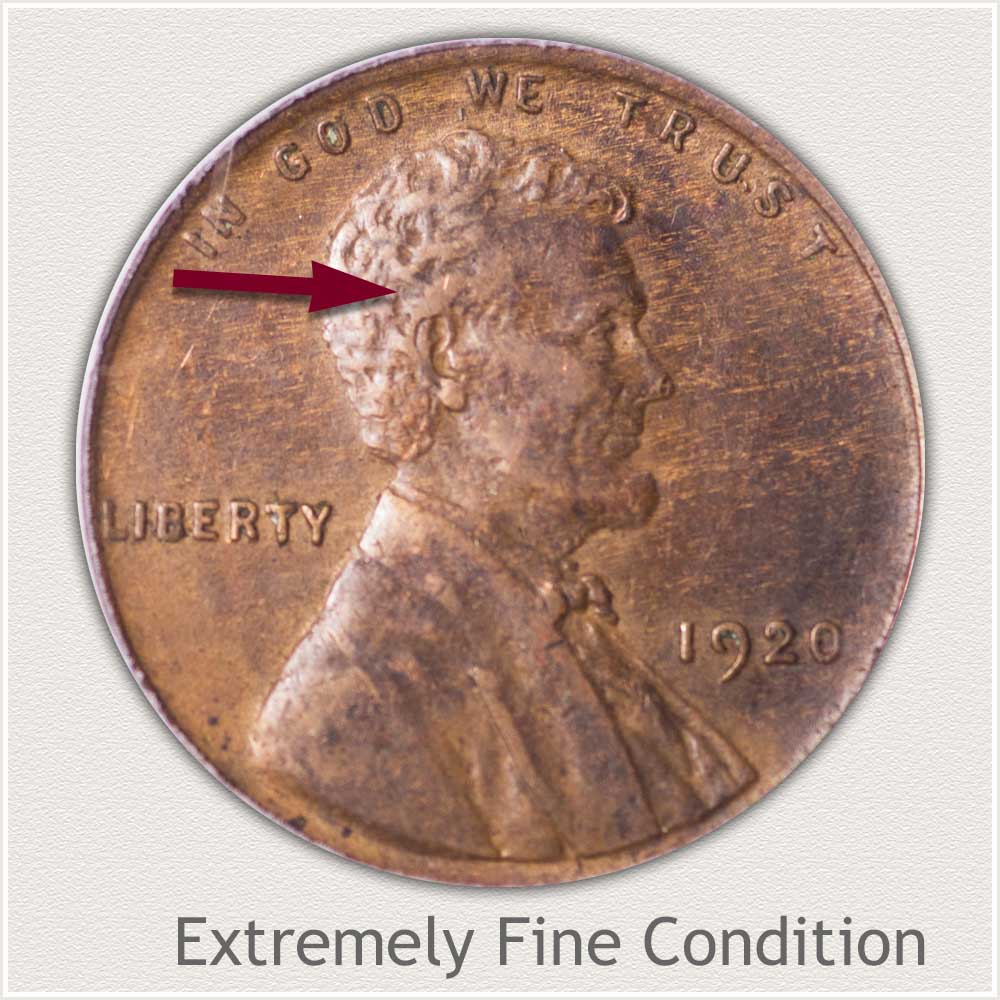 Evidence of a small flat area is beginning with the wave of hair just above Lincoln's ear. A small merging with the hair and ear is also developing. Smoothness to the metal helps to identify wear. 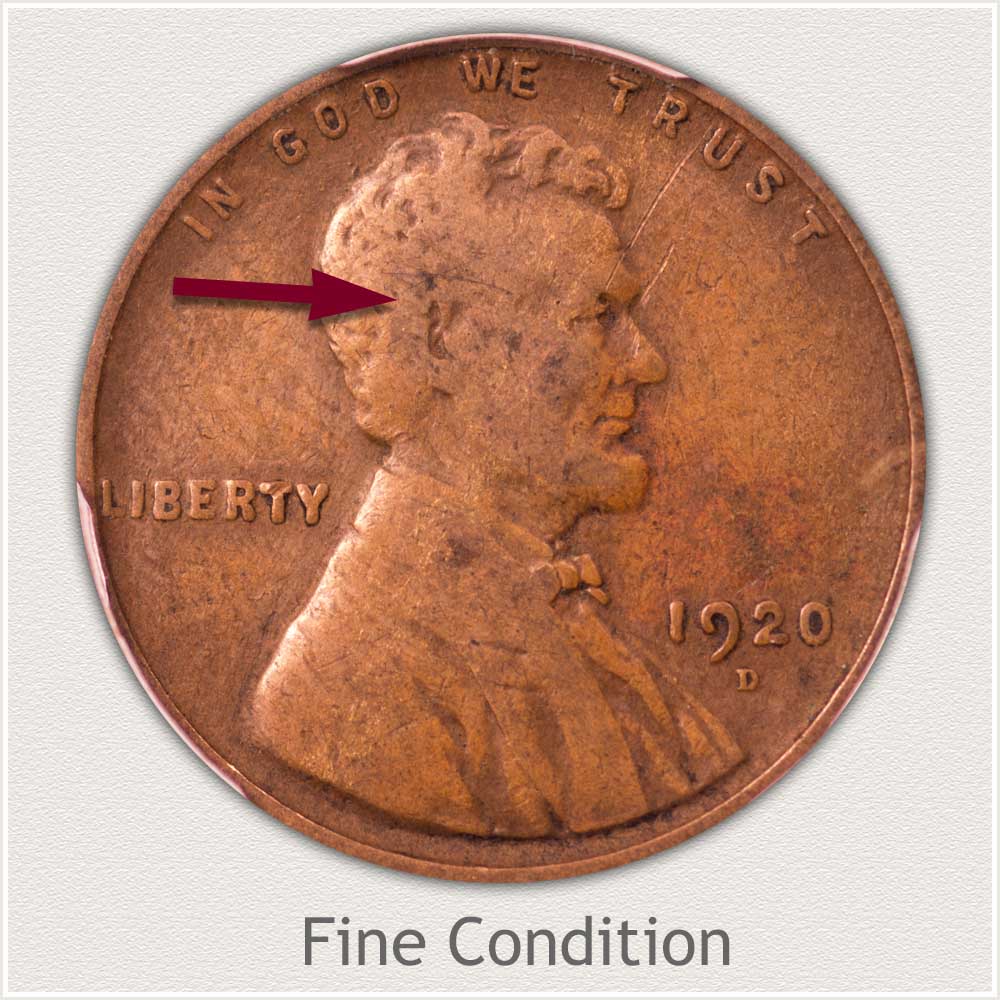 Fine Grade: Noticeable wear is a fist indicator of wheat pennies in Fine grade. Loss of metal from high areas is causing a merging to many parts of the design.

Lincoln's ear is still visible but well connected to hair both above and behind. A small but visible flat area extends from the ear to the temple area. Ample detail remains within larger waves of hair.

Despite spending time in circulation and loss of detail, bold and crisp lettering and date remain. A well-defined portrait is clearly defined, and no large marks are visible. Eye appeal, important to collectors, is also displayed by soft brown tones of color. 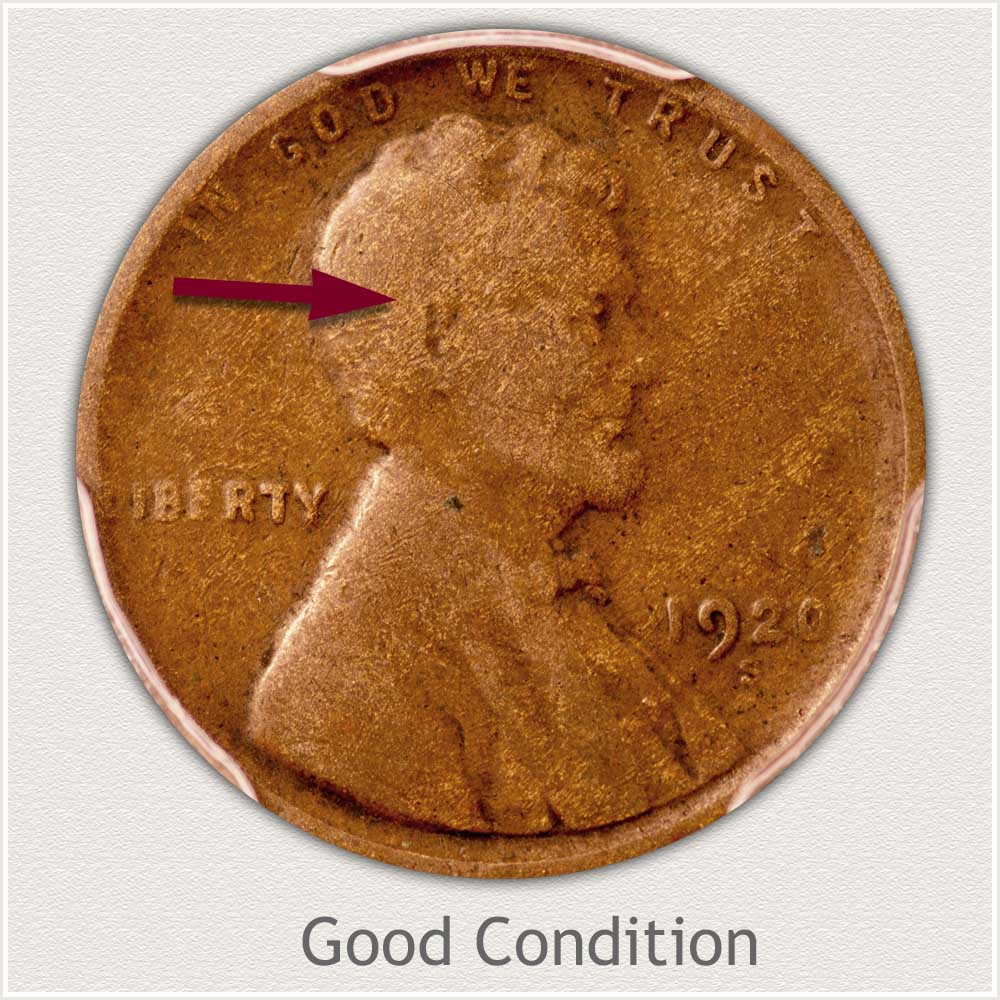 Good Grade: Heavy wear has flattened most of the design to a wheat penny in the Good grade. Loss of detail has removed the contours to the face and most of coat and shirt. Legend and date, often faded, must remain visible and clear enough to read.

Wear has removed all hair detail surrounding Lincoln's ear. A flat surface extends into his forehead and temple area. Evidence of hair detail is now confined to the top of his head.

Grading any coin involves many points to judge. When either; value is high or condition is at the higher end a closer inspection of the coin is needed. Grading Lincoln Wheat Pennies expands on the grading process with video, images of the grades and in-depth descriptions.

Looking closely at this 1920 Lincoln cent, the design appears somewhat recessed into the coin. A "dished" look surrounds the outer edges. It is clearly not a typical example, an error occurred during striking. 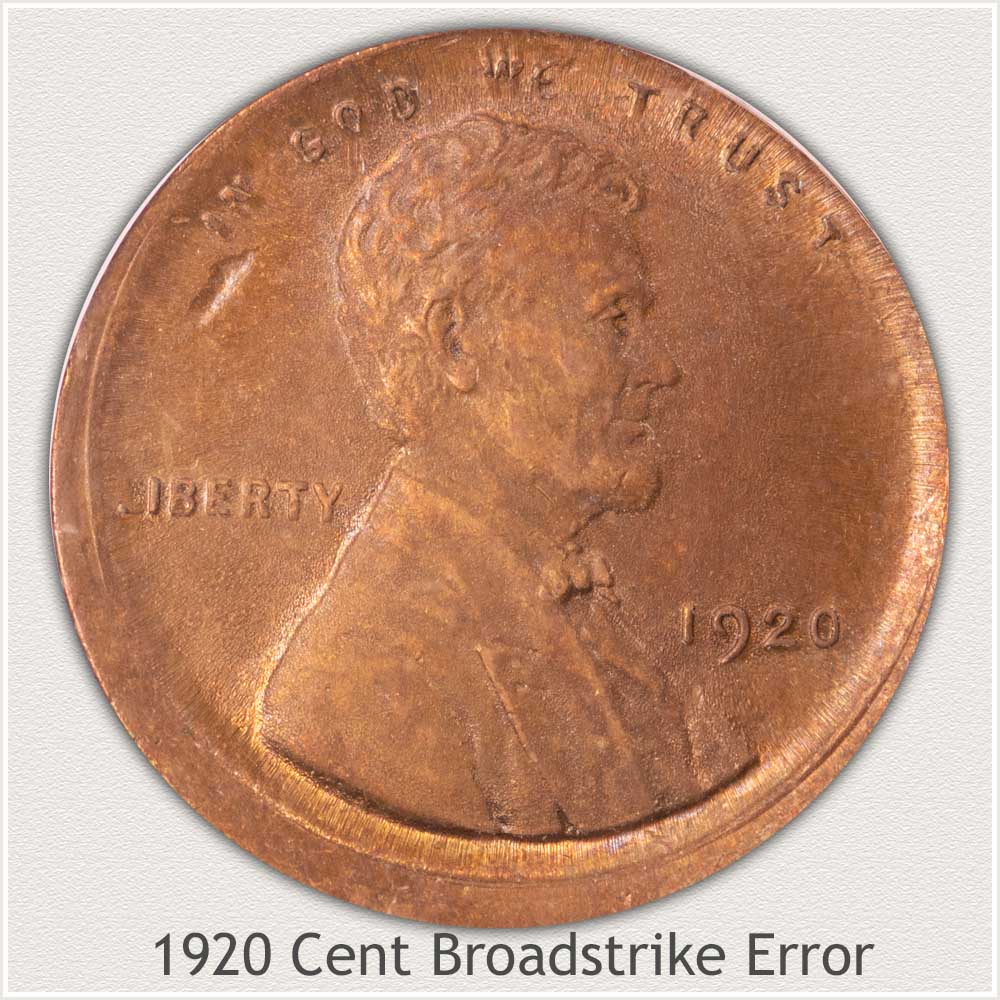 An important step during minting a coin is the placement of a retaining collar at the exact moment of striking. An upper die combined with the lower die strikes a round blank and a collar restrains the expanding metal. Absent of the collar, metal is free to squeeze outward. Producing a "Broadstrike" error wheat penny.

Significant to correctly identifying a broadstrike error is the complete design remains visible. All outer lettering, date and elements of the design are clear. In contrast, if the coin blank was struck off center parts of the design by definition are missing. The "L" in Liberty is visible on the left side and lettering to In God We Trust are visible on the right, completing the design.

Once noticed the coin displays a visual difference from the norm. Broadstrike errors are valued individually. Nice condition examples are favored by collectors. Lincoln cent errors are a specialized collecting theme - value relies heavily on eye appeal of the coin.