Locating the correct position on the chart finds 1936 penny value. Date and Mint Marks are further defined by condition of the coin. Collectors and dealers use a process of identifying and confirming: Date | Mint Mark | Condition

Important to evaluating how much a coin is worth follows this step by step method. A large separation of premium is noted starting with the Fine condition grade.

Wheat pennies from the 1930's usually suffer from extensive wear. Identifying your coin as above average condition separates it from the norm.

Grading condition is the next to judge. Grading may seem difficult at first. Small amounts of wear are the deciding factors. By looking closely at key areas, differences become noticeable.

Judge first the overall appearance of the coin when comparing to grading images. Quickly narrowing a grade range.

Three Varieties of 1936 Cent to Identify

Coinage of the US was the highest in history in 1936 as headlined in the US Mint Report. A large contributor to the record production was the 417,316,173 cents struck. Three varieties of 1936 pennies representing three mints entered circulation. 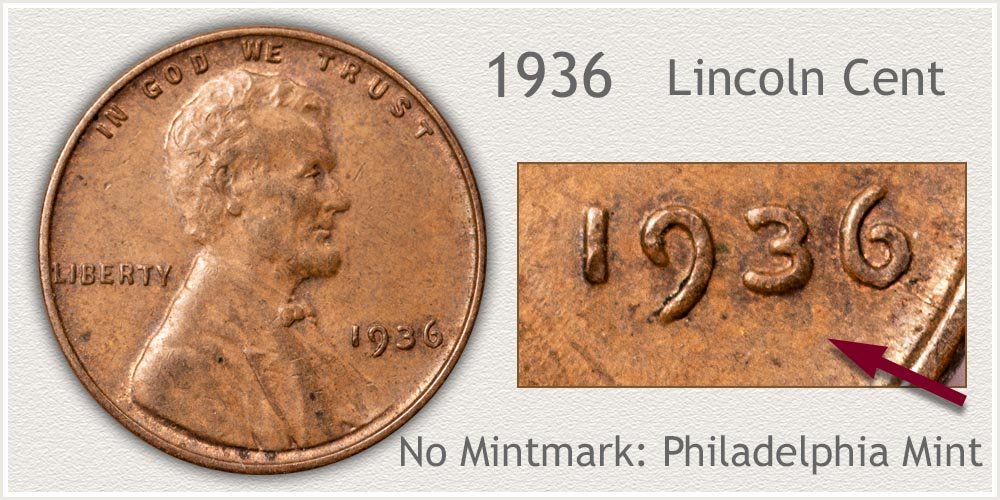 Supplies of Philadelphia 1936 cents place these as Abundant on the rarity scale. These remain popular with collectors representing an available date from the 1930's. Affordable and of interest to young collectors. A desirable coin is lightly worn showing no signs of large marks and dark coloration. 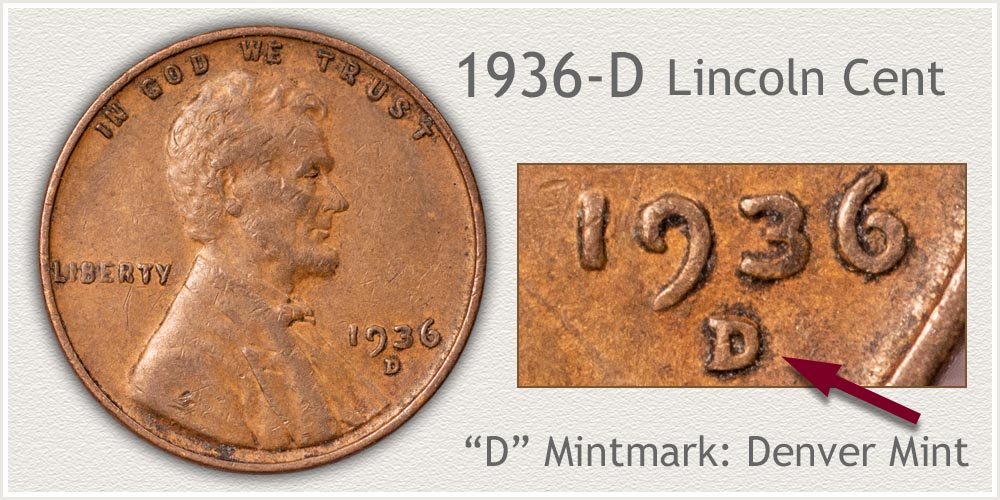 Denver struck a total 40,620,000 cents in 1936. Abundant today on the rarity scale. Lincoln cents are assembled in sets including all date and mintmark varieties. A noticeable rise in value beginning with the Fine and above grades indicates most available are heavily worn.

A coin displaying detail in Lincoln's hair and a clear separation of the ear from the hair is above average in condition. 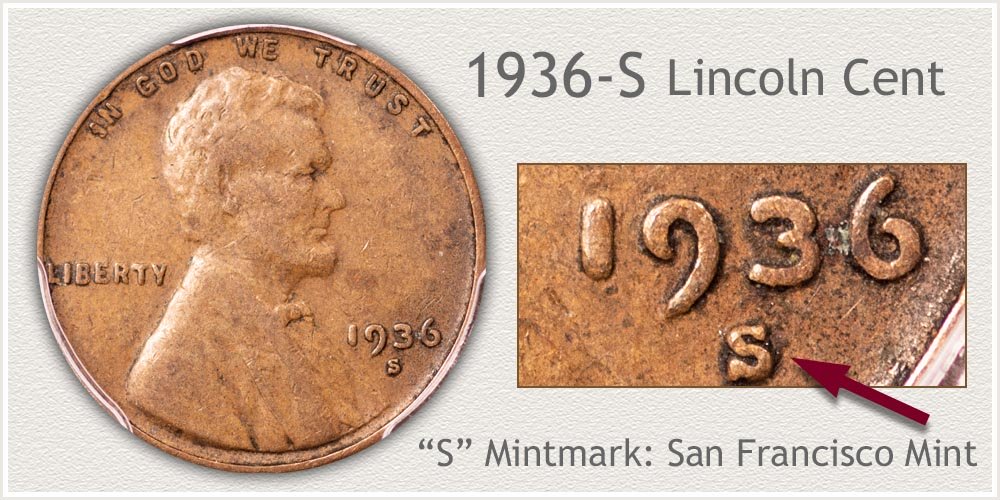 Average quality 1936 San Francisco cent are Abundant on the rarity scale. Uncommon are those with light wear to no-wear to the surface. These are in demand by young and beginning collectors seeking a pleasing example of a popular mint coin.

Under a single light source, view the central part of Lincoln's portrait. A bow tie showing a clear separation of the knot from either side is an above average grade coin.

Charts list value in order of Grade. Condition of a coin's surface is examined and judged to determine the different grades. High areas of the devices are prone to first contact and wear, these are imaged and described.

Achieving an accurate value involves an accurate determination of grade. When viewing your coin; first overall impression is important. Positive signs are even color and no distracting marks. 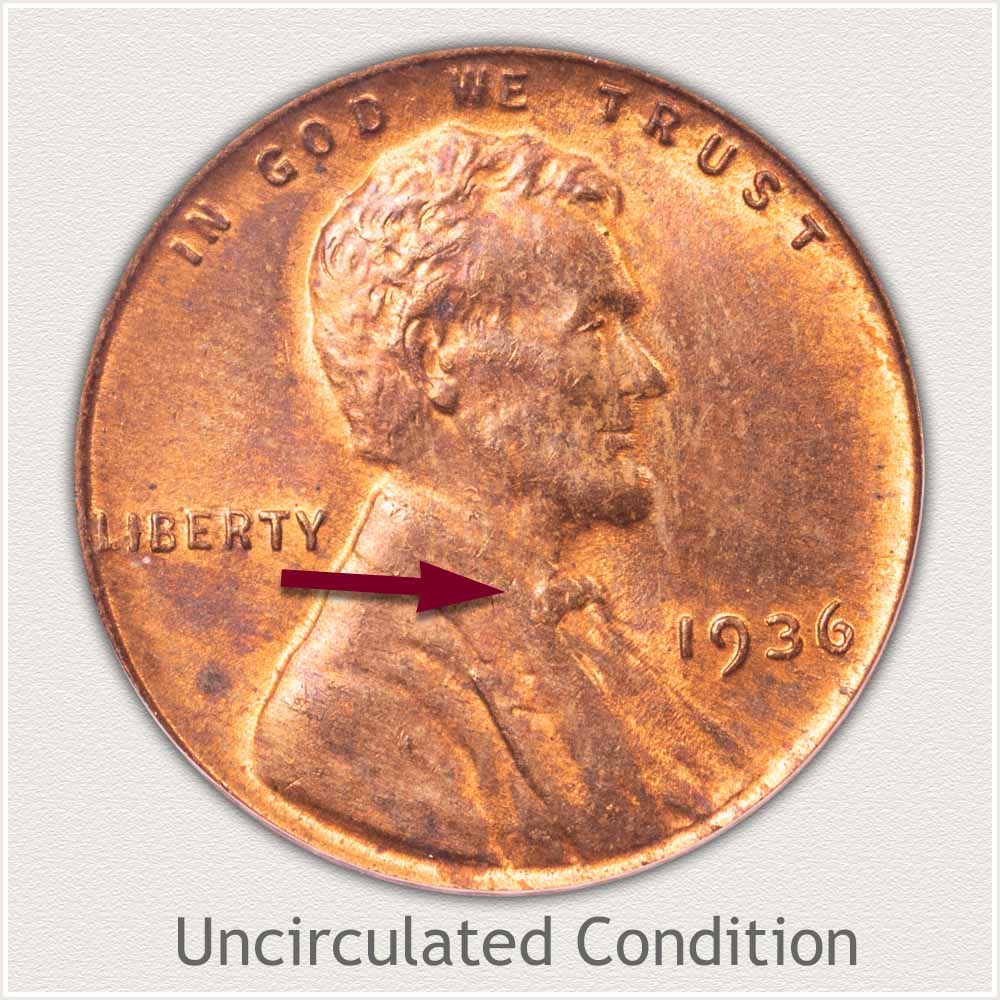 Uncirculated Grade: Saved before entering circulation an uncirculated grade penny shows no wear to any surface of the coin. Lincoln's portrait and fields of the coin are still covered with the texture of luster.

An areas prone to wear and removal of luster is Lincoln's bow-tie. A close inspection confirms it remains without any smoothness and loss of detail. The area of the bow-tie is somewhat protected however its central location is prone to any removal of detail. If still covered in the fine texture of luster it helps to establish the mint state grade.

Bright reddish-gold color remains indicating a well-preserved wheat penny. Soft toning is just beginning to shade areas helping this 1936 mint state penny display a vibrance. Eye appeal is strong and many collectors value and choose these to add to their collections 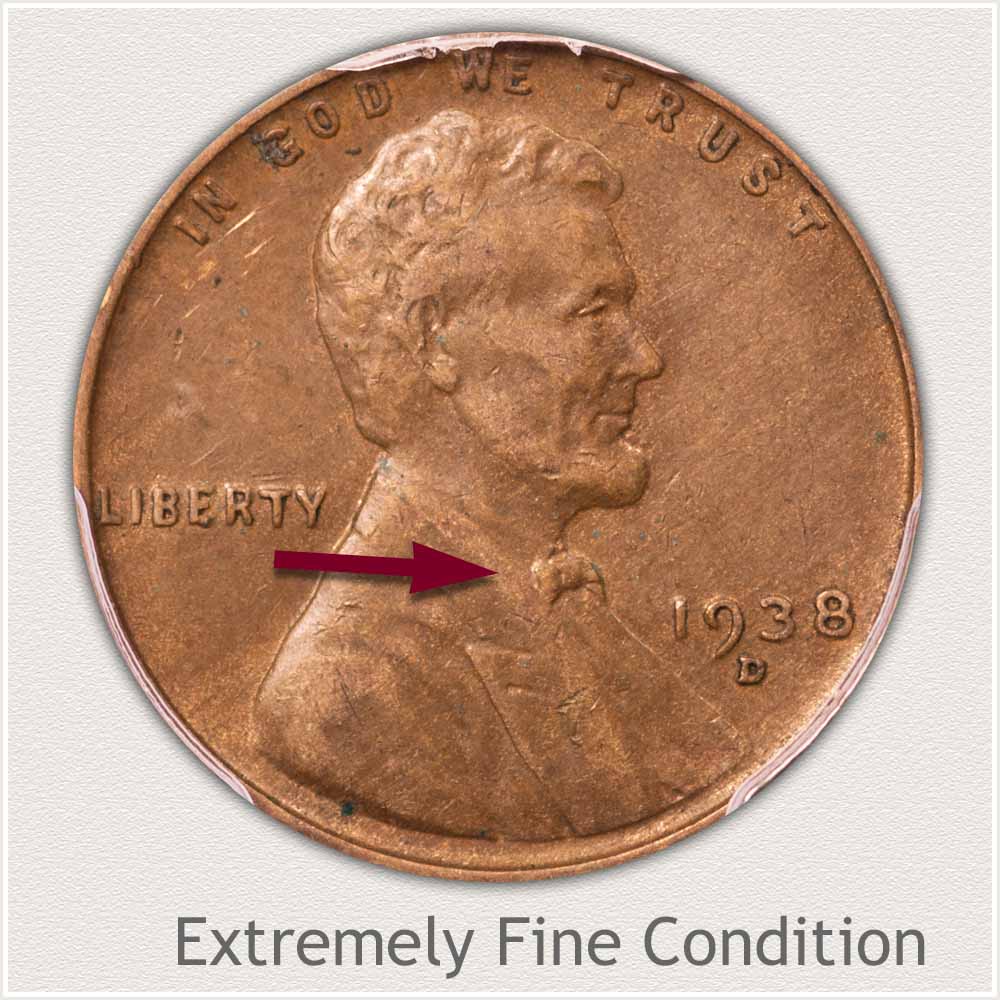 Extremely Fine Grade: Light wear defines the Extremely Fine grade. High areas of the devices and legend are beginning to show smoothness. A minor amount of flatness is noted surrounding the bow-tie.

Lincoln's coat line separating the shirt is worn slightly along the entire edge. A well-defined bow-tie confirms the Extremely Fine grade. Elements of the tie are well defined, a clear knot in the center with distinct ribbons to each side. Notice the remaining boldness to the tie and clear separation from his lapel. 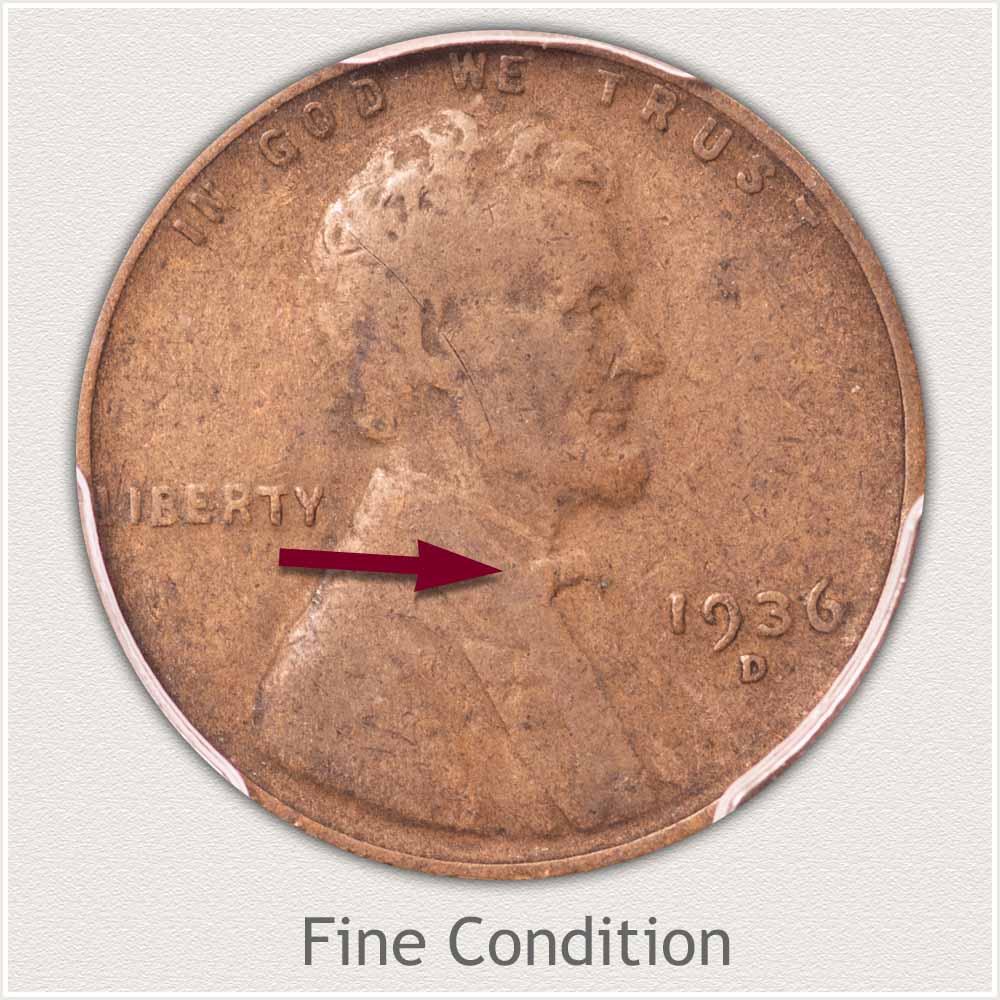 Fine Grade: Merging of major design elements helps identify a wheat penny in Fine grade. High areas are now flat across their tops and many have connected. Small elements to the bow-tie are just visible.

Somewhat protected, Lincoln's bow-tie is recognizable. His tie remains outlined but a clear separation of the central knot from the ribbon is beginning to merge and is faint. Separation of the shirt from the tie on this 1936-D cent is just visible suggesting a strong Fine grade.

Subtle contours remain within the coat design and Lincoln's face on this Fine grade wheat cents. Bold legends and a strong date add to eye appeal; an important part of establishing a value. A new collector would appreciate the pleasing coin and affordable addition to a set. 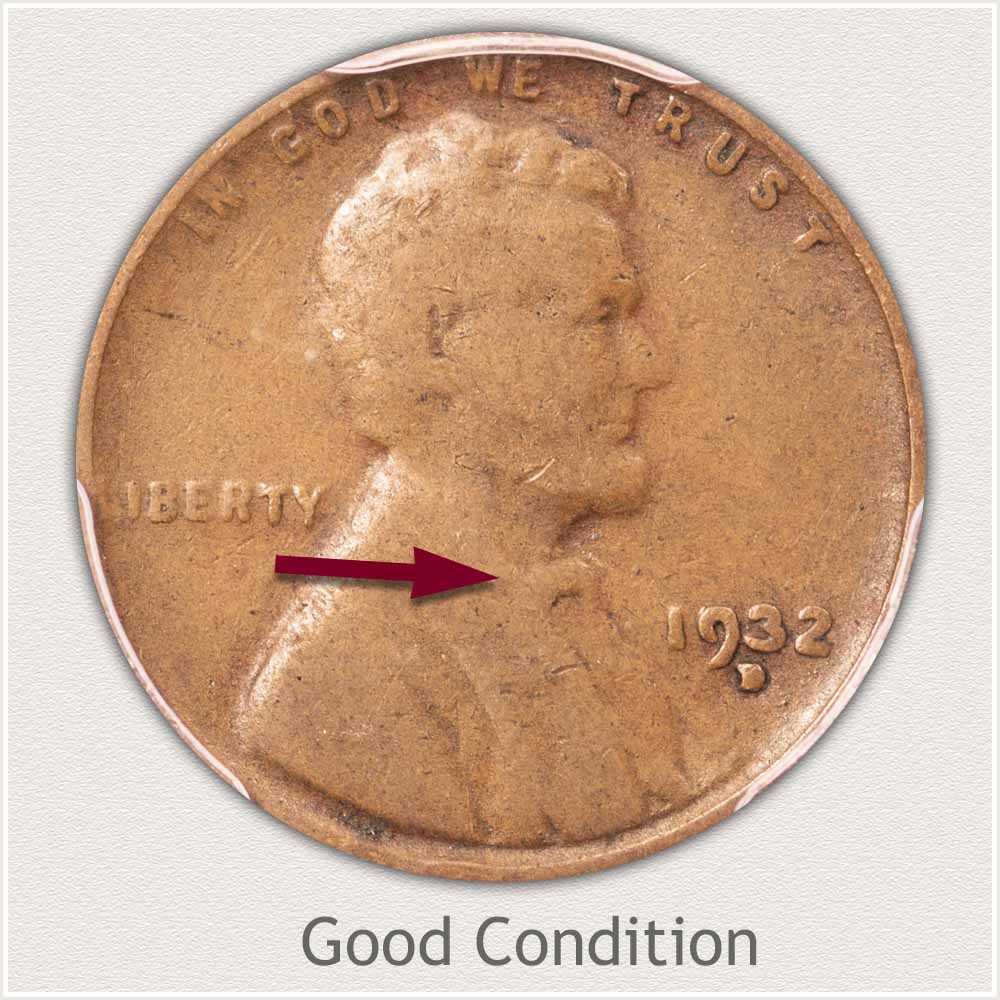 Good Grade: Wear covering the entire surface defines a penny in Good grade. A smooth surface is noted over all devices. Lincoln's portrait remains well outlined and a clear bow-tie element is recognizable.

A continuous flat area now covers Lincoln's face, jaw, and hair. His bow-tie remains with a strong upper and lower separation. Merged are the central knot with ribbons defining the bow. Contours of the entire tie are worn smooth.

Well-worn coins are further judged noting positives and distractions. An even toning covering a relatively mark free surface of this example wheat penny is a strong plus. Many of these older coins are toned dark and unappealing. 1930's era collecting of wheat cents is beginning to place a premium on coins with positive eye appeal.

An interesting collectible is pictured. A Lincoln error "Broadstrike" penny. Popular and higher in value because of the visual differences from a normally struck cent. In the striking phase of minting this coin, the upper and lower dies came together without the collar in place to retain the blank cent. Metal expanded outward beyond the normal diameter of a penny. 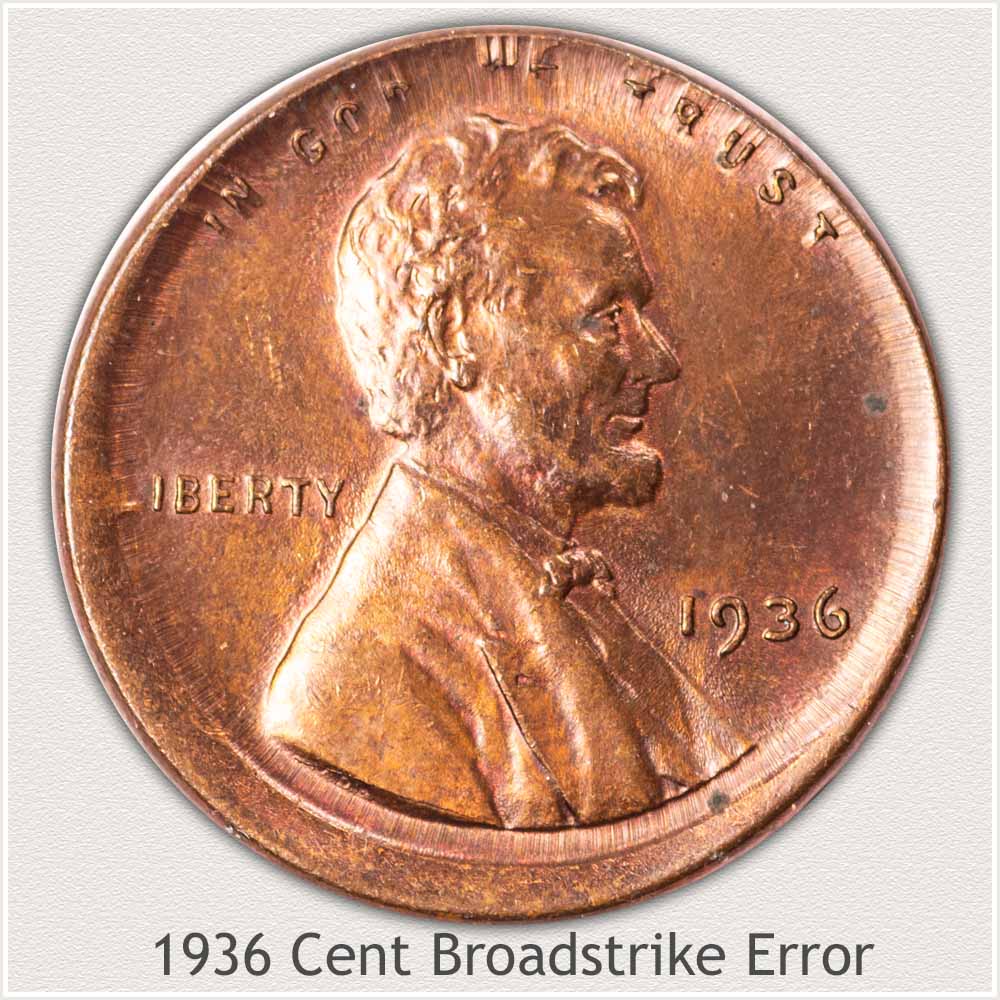 A complete design was impressed, however a broadened space along the edge is noticeable to parts of the coin. Defining the broadstrike is a "complete" design remaining.

Notice the crisp detail throughout, helping confirm a mint produced error. If a coin is damaged outside the mint by squeezing or hitting the coin a loss of detail results. Distinction of the two causes separates a valuable error from a damaged - no value coin.

Collectors seek these errors in well preserved condition. Many errors circulated for a time, ignored and received varying degrees of wear. An eye appealing example, minimal to no wear is preferred. The 1936 broadstrike error imaged is slightly off-center and is worth slightly less because of aesthetics. Placing value on errors is subjective, each is priced individually within the specialized error collecting field.