A popular variety to 1945 penny value is the "S" mint, San Francisco issue. Throughout the Wheat cent years low production was typical of the San Francisco mint. First step is to separate these from the rest. Proceed through the value process of inspecting: Date | Mint Mark | Condition

Second step is judging Condition. Examples with light wear, indicating higher condition are uncommon and worth a premium.

Comparing to images determines both, identity of mint mark and grading condition.

Grading condition follows. Additional categories on the chart separate values by condition. A set of images showing a progression of wear helps visualize the differences. Descriptions of important areas to judge helps match your coin to a grade. Each different combination of these factors is listed on the value chart.

1945 places 4th in highest total mintage of wheat series Lincoln cents. San Francisco variety pennies continue the trend of producing the fewest for the year. Popular with collectors and one to inspect for condition. 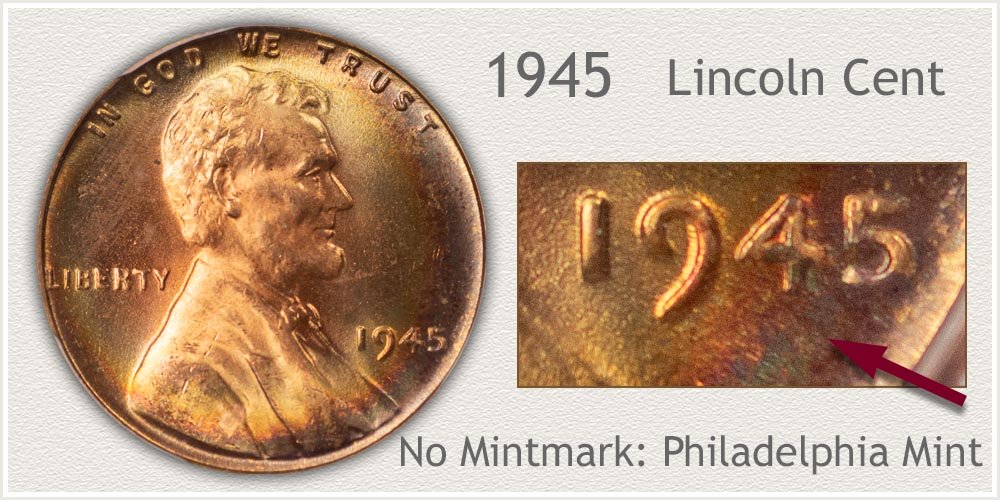 Ample quantities available, placing: Abundant on a rarity scale. To set a coin apart from the large numbers known requires an added appeal. Many exist in Mint State condition - like new - collectors favor those still bright with no fading of original red color. Circulated coins with very light wear are favored by beginning and young collectors. 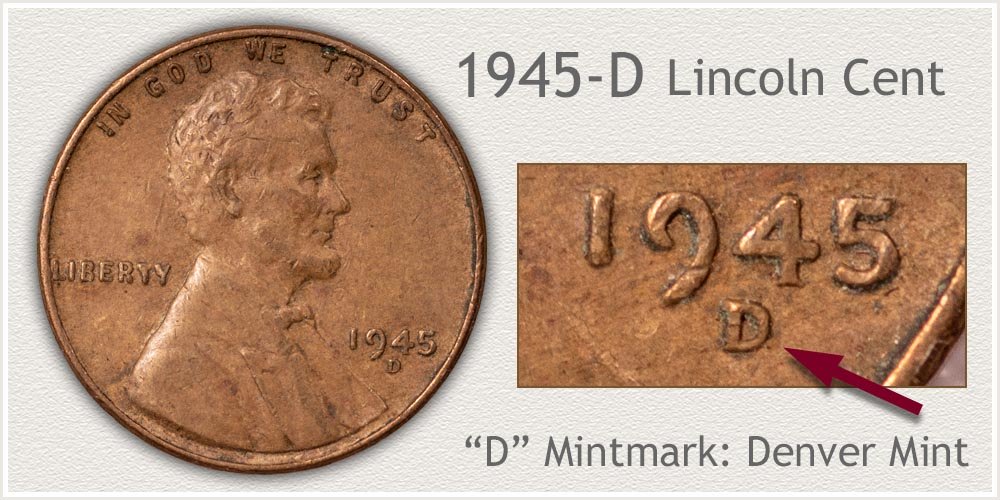 Abundant on a rarity scale. Denver 1945 cents are needed as part of the varieties struck that year. Collectors are the strong base to value, noting the value chart, their preferences are in the Extremely Fine grade.

Desirable as part of collections are 1945-D pennies lightly worn or better condition. Adding to appeal are coins without a combination of dark and light areas. Depending on conditions of storage, deep irregular toing is imparted. Evenness of coloration defines higher appeal. 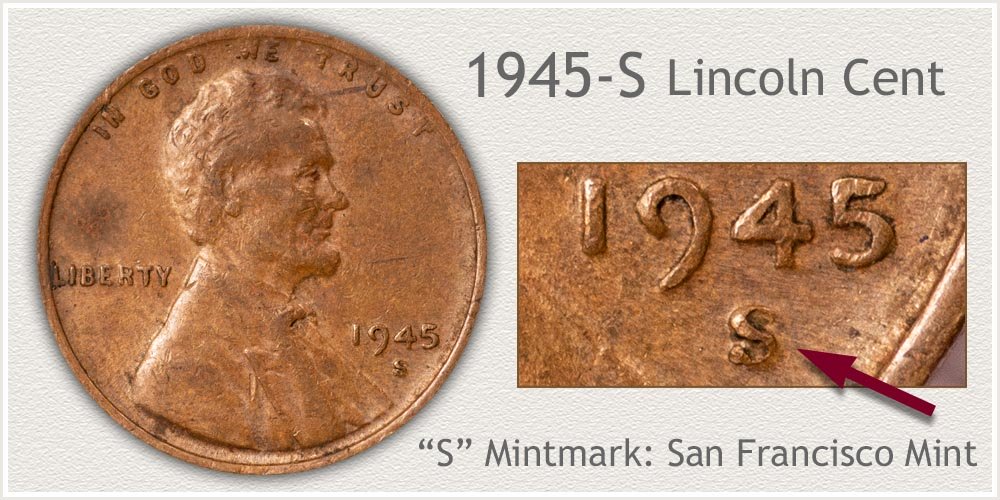 San Francisco struck the fewest of the three varieties of 1945 cents. Continuing a trend of lowest production throughout the series.

All varieties of each date are sought as part of collections. 1945-S pennies hold a small premium in circulated grades. Separate and give a closer inspection to each, looking for bold lines within Lincoln's shirt and coat. Grading, the next step finds higher end examples.

Collectors inspect each coin, judging condition and looking for above average examples. Grade, a notation of condition, is determined and used as part of the description of the coin. Collectors and dealers now combine date, mintmark, and grade as they value an individual coin. 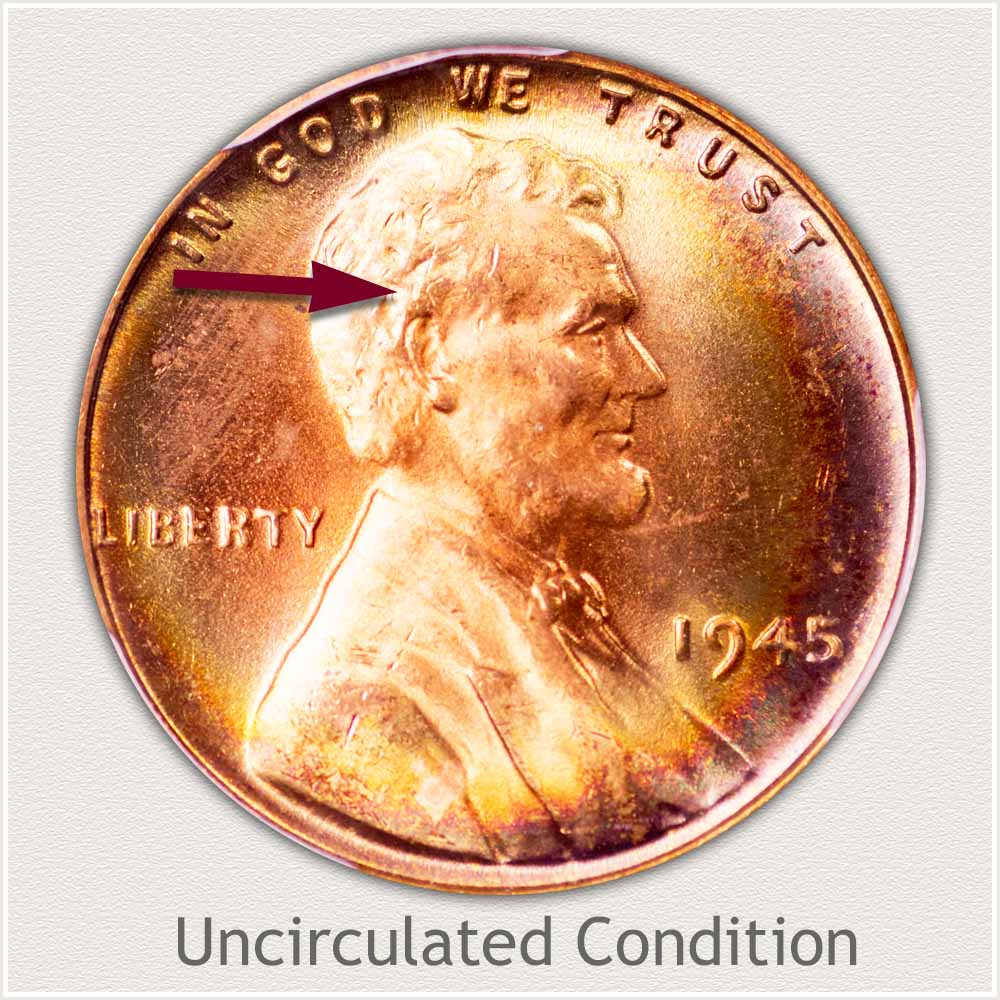 On well preserved wheat cents bright - untoned luster is a plus adding to value. Copper does tone shades of brown over time with this toning laying on top of original surfaces. Lack of wear is a true indicator of the mint state grade. Look closely at Lincoln's cheek just below the eye. Any smoothing of texture indicates circulation wear.

Image is a very nice 1945 Lincoln penny, bright with original shine. A small degree of toning is developing along the rims framing the center and adding eye appeal.

Judge Color and Wear of 1945-Penny Toning and wear are natural to coins entering circulation. Wear disrupts luster and causes removal of metal. Presence of toning is not an indication of wear. Toning occurs independent of wear; it covers the surface in any condition.

Inspecting the cheek of Lincoln shows no wear. Laying on top of the surface the moderate toned 1945 penny still retains the fine grain of original surfaces. Looking "through" the soft brown of the toned coin finds no wear and smoothing to the surface.

Tilt coins at a sharp angle, magnify into a high point, in this case the cheek below the eye, and judge for any smooth surface different from the surrounding area. 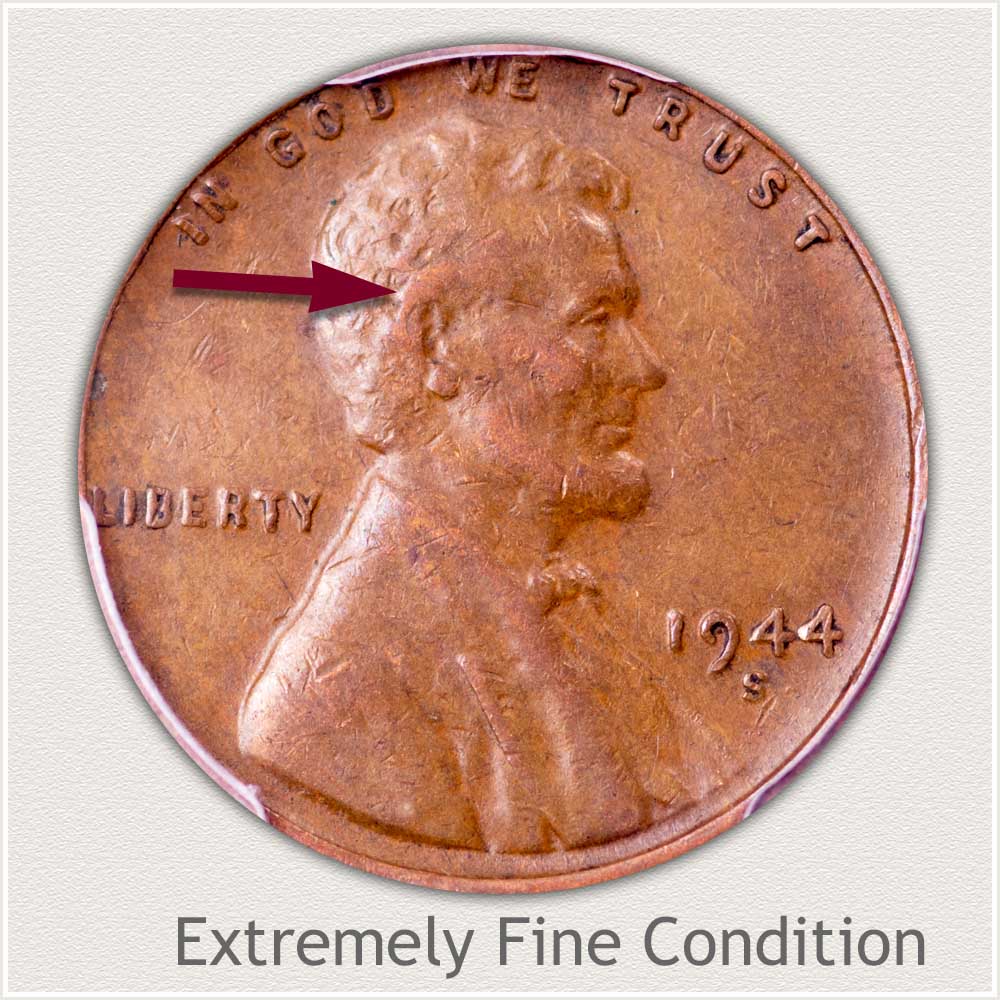 Extremely Fine Grade: Light wear is confined to the highest points of the design on Lincoln cents in extremely fine grade. Key to the grade is light wear and the slightest merging of design elements.

Lincoln's cheek is well defined and almost completely rounded in profile. A small flat area is visible just below the eye but the cheek is well separated from his nose. Original texture to the surface remains in the protected areas of the eye and just below. With only evidence of wear extending towards the ear all elements remain bold.

Soft brown toing of the center is surrounded by deeper shades towards the rim. A pleasing contrast of colors lends well to eye appeal. No large nicks distract and main features remain bold and well detailed. Lincoln cents minted in the 1940's are collectible quality in extremely fine grade. 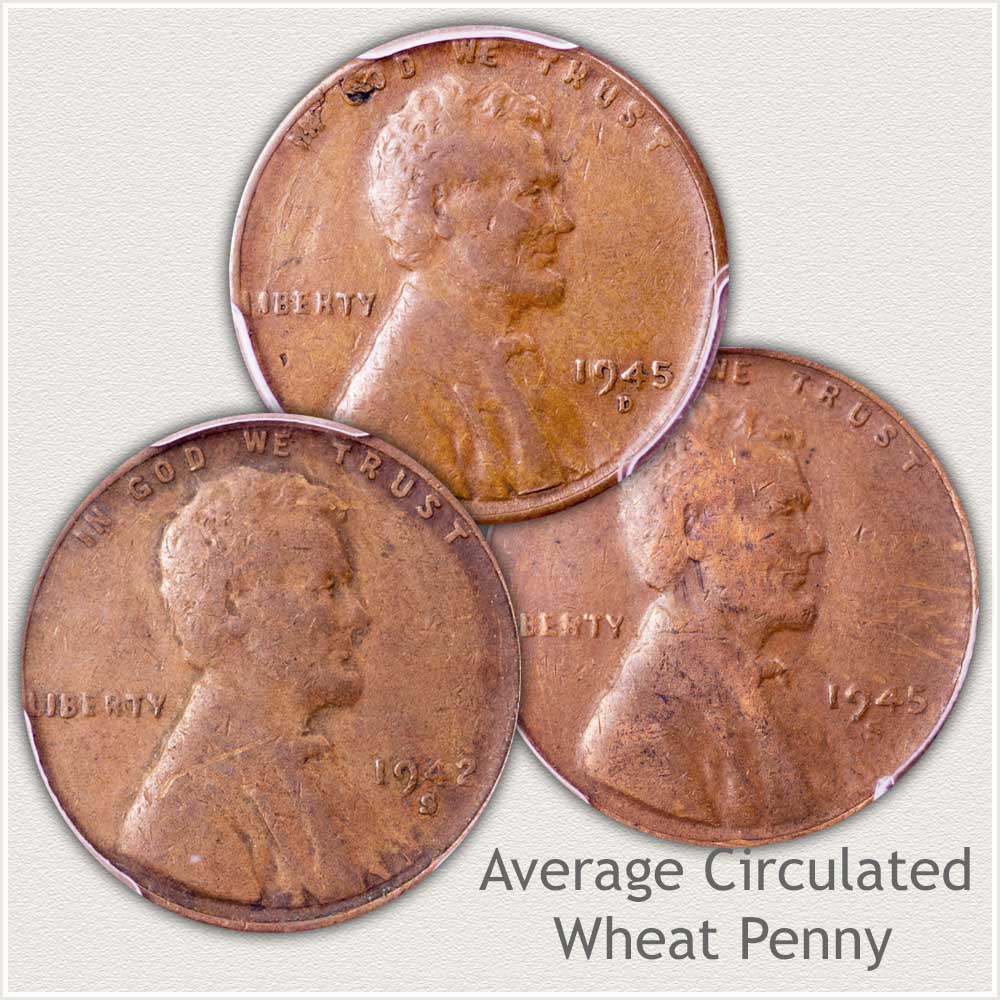 Average Circulated Condition: Moderate wear has lowered the profile and merged many design details on lower condition wheat cents. These coins have worn to a point grading below the extremely fine grade.

Overall view of the examples identify smoothing over Lincoln's cheek and jaw, and many finer details of hair. In the era of 1944 through 1958, coins in this grade are valued by beginning and young collectors as an affordable entry into the wheat cent series.

Despite moderated wear, lack of discoloration and large marks lends to a pleasing appearance. Clear readable dates and lettering remain. A worn but problem free wheat cent is acceptable to many collectors.

Detecting wear and condition by examining all parts of the coin's surface confirms a grade. As values climb higher many additional factors are used deciding the grade and worth.

Collectors make the ultimate decision as to what coins are worth collecting. Many themes are pursued within the Lincoln wheat penny series. Date and mintmark runs are the premier example, very popular. Specialized sub groups are also collected to a lesser extent, error varieties is one. 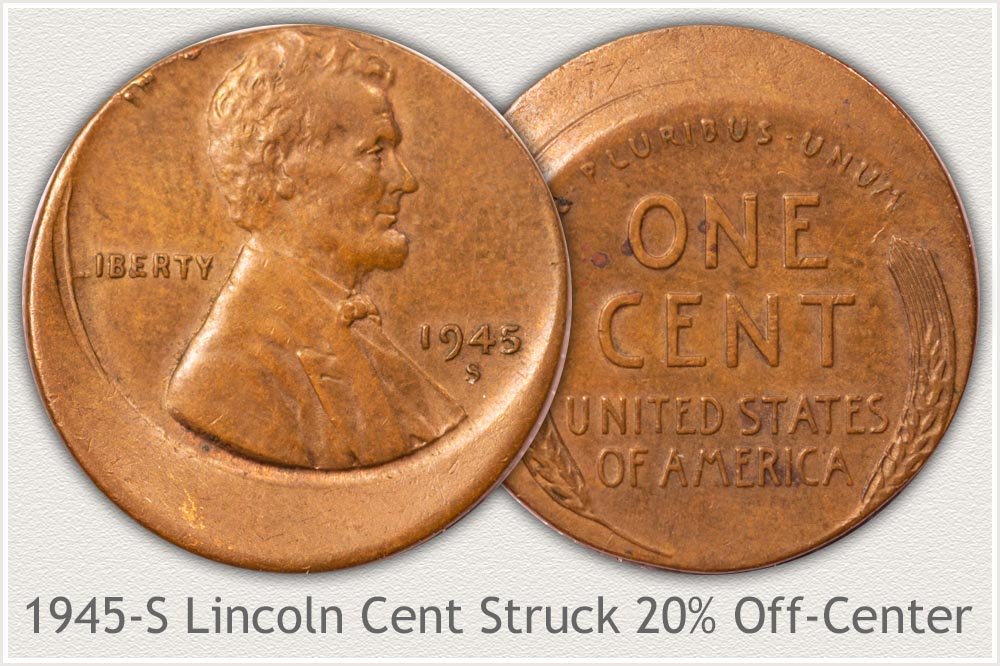 Error wheat pennies come in many forms. Different mintmark errors such as double punching of the mark is intensely studied and sought. Doubling of design elements during the preparation of working dies are also popular with collectors. Unintentional mistakes made during the striking process are legitimate errors and are of interest.

One striking error with high visual impact are known as off-center strikes. These coins were misaligned at the time of striking and the coin shows blank areas to the sides of the design. Visual appeal is key to placing a value on error coins.

A 1945-S penny struck approximately 15% to 20% off-center entered circulation and was quickly spotted and saved. Of the number of 1945-S cents available today this example does stand-out, displaying a special quality. Value is higher because of the error and there is a following of collectors.