Proceed through a step by step process of identifying each. Mint marks and condition are key to 1955 cents. Collectors seek higher condition examples to add to sets. Premiums begin to rise quickly for the scarce varieties.

Attention to small details is key to a complete picture of value.

Step One: Accurate identity of Date and Mint Mark combination. Collections are assembled including these varieties. Each listed with its own category on the chart. Mint marks are described below.

Step Two: Condition is the next deciding factor to higher value. Matching your coin to images in the Grading section narrows its range. Confirming a 1955 penny in lightly worn condition raises its statue with collectors.

Three mints struck 1955 pennies, creating three varies to identify. Part of the second era of the wheat series (1909 to 1958), these are sought by experienced and beginner collectors. A special situation occurred in 1955 when announced San Francisco was directed to other duties and was the last year of coining operations. "S" mint coins were quickly removed from circulation in anticipation of scarcity as a collectible. 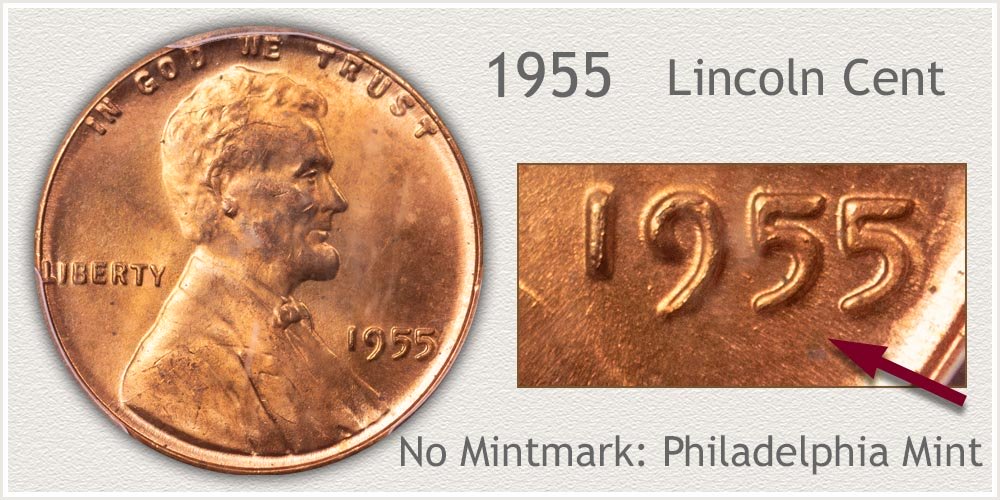 Philadelphia stepped up production in 1955 and struck the 10th highest yearly output of wheat cents. 330,580,000 delivered. Large initial supplies results in Abundant on the rarity scale. Today's market for a 1955 penny prefers a pleasing coloration combined with strong details remaining.

Uneven color displaying light and dark areas detracts from eye appeal to any coin. Copper is prone to turning deep shades of brown naturally. Handle your coin by the edges to preserve an even color. 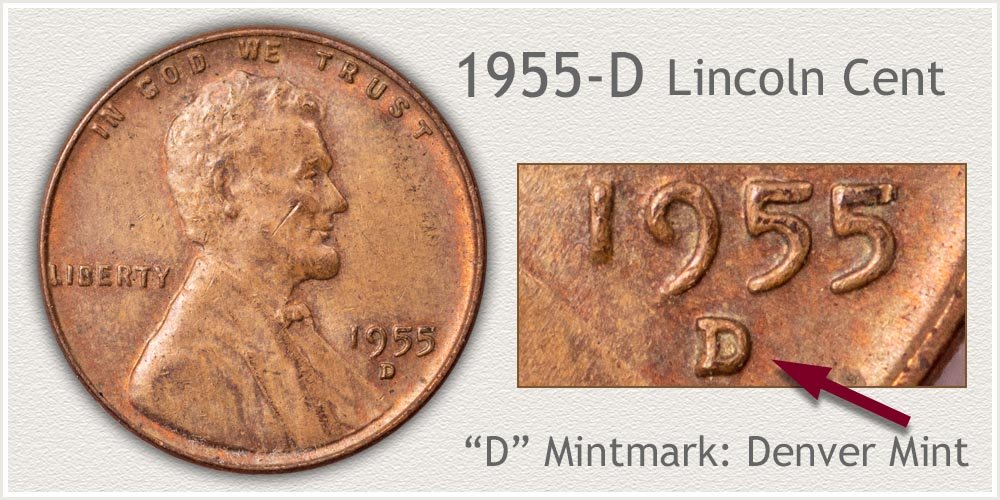 1955-D penny variety is Abundant on the rarity scale. Denver contributed the largest amount to the year's production. Striking 563,257,550 cents. Above average quality examples are favored by collectors.

Ample supplies are available, giving collectors an opportunity to search for lightly circulated or better coins. Of special interest are those pieces with strong lettering on the reverse. Examine for completeness of letters along the rim and note strength of ONE CENT. All details fully raised from the field are higher quality. 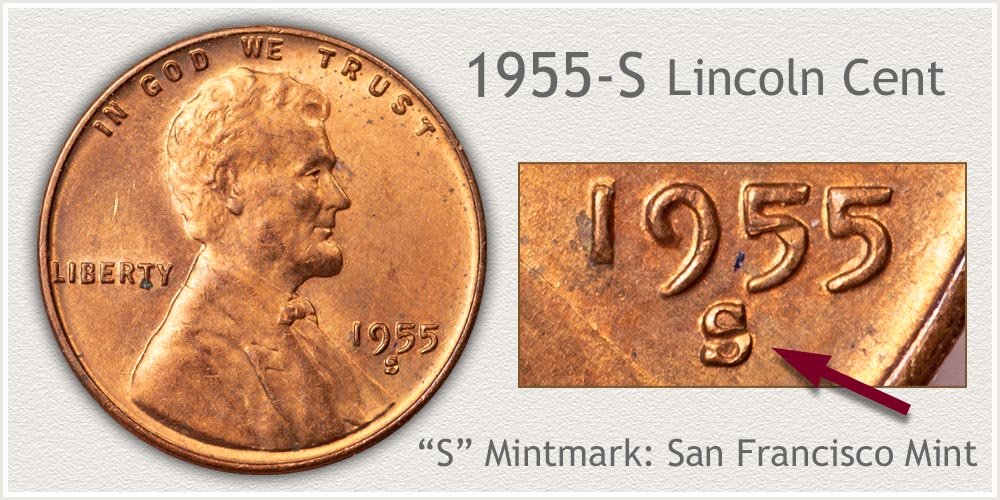 San Francisco struck 330,958,200 wheat cents before ceasing coinage operations in March 1955. Alerted to the news, collectors began accumulating 1955-S pennies. Large numbers were set aside and are Abundant today on the rarity scale.

Many 1955-S pennies saw only short if any time in circulation. Lightly circulated examples are considered above average if sharp in detail. Mint state pieces are notable if still bright original reddish copper color.

A "grade" defines the condition of a coin. It is a notation use by collectors. Specific qualities are inspected as to the amount of wear and compared to the standard for the grade. Key areas are used to judge surface quality. The following images help visualize these differences when judging a wheat cent for condition.

Begin the grading process with an overall opinion of the coin. Pleasing tones of tan and brown are preferred by collectors. Follow with comparing your coin to the images finding a condition match. 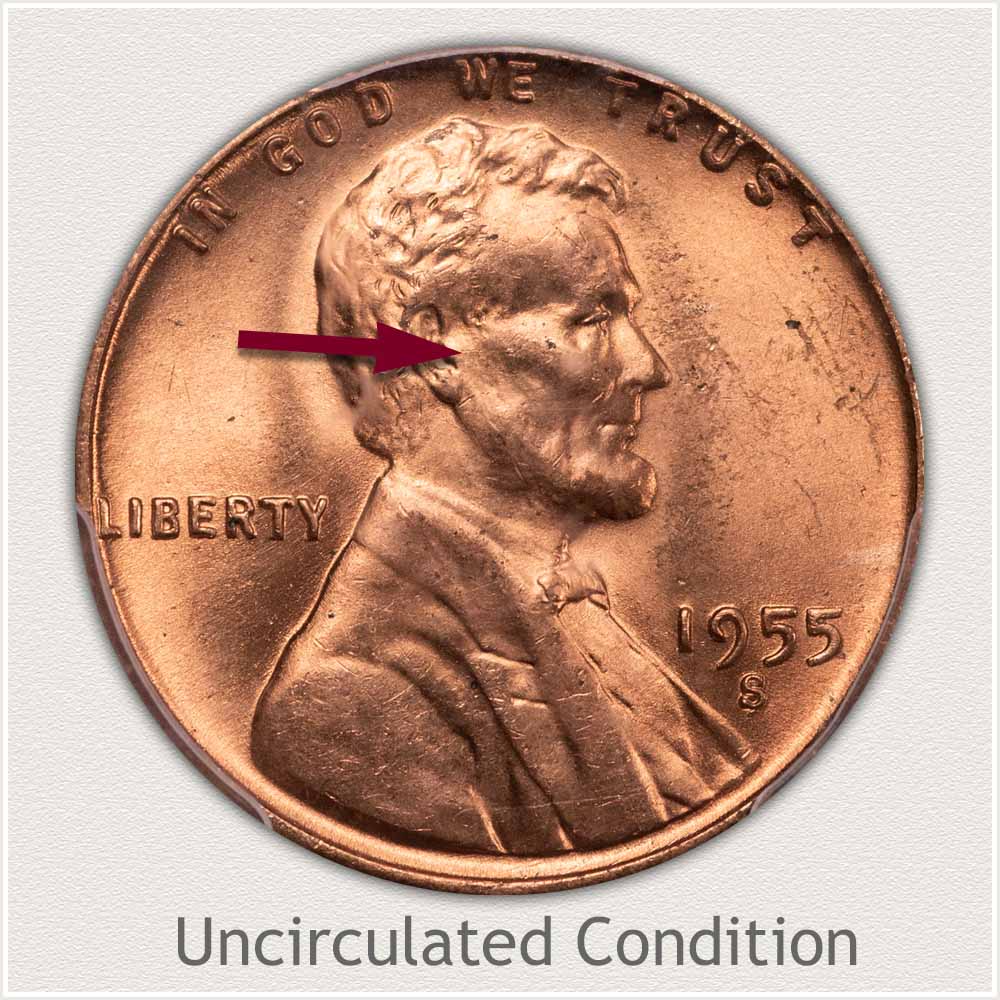 Uncirculated Grade: A mint state - uncirculated coin is separated from all others by one critical factor. No wear to the surface has taken place.

Helping judge this grade is luster remaining on the high points of the design. Inspect Lincoln's cheek and jaw lines. These areas are prone to wear and if any delicate luster is removed a smoothing effect leaves a dullness to the metal. Compare the ridge lines of cheek and jaw to surrounding areas to see the difference in texture.

The 1955 penny remains bright with luster, a helpful advantage in seeing fine grains to a surface without wear. Tilting the coin at an angle also helps to confirm no areas of smoothing due to wear.

Evaluate Toning and Value of 1955 Penny: Next feature changing the eye appeal and value is color and toning of the surface. The 1955 penny with original luster is untoned. The moderate toning on the center coin is beginning to cover Lincoln's portrait and lends a pleasing highlight to the design. To the far right is a completely toned brown wheat penny notable for the shimmer of brightness from below the soft color.

In all cases these coins are a technical mint state grade with no wear to the surface. Separation of value is the appeal of color and toning. An uncirculated wheat penny toned brown is pleasing, however many collectors prefer luster with shades of original color. Moderate toning is found on many mint state coins, now eye appeal and shades of color becomes important. An elusive bright original cent with no toning has received special care and is sought by collectors. 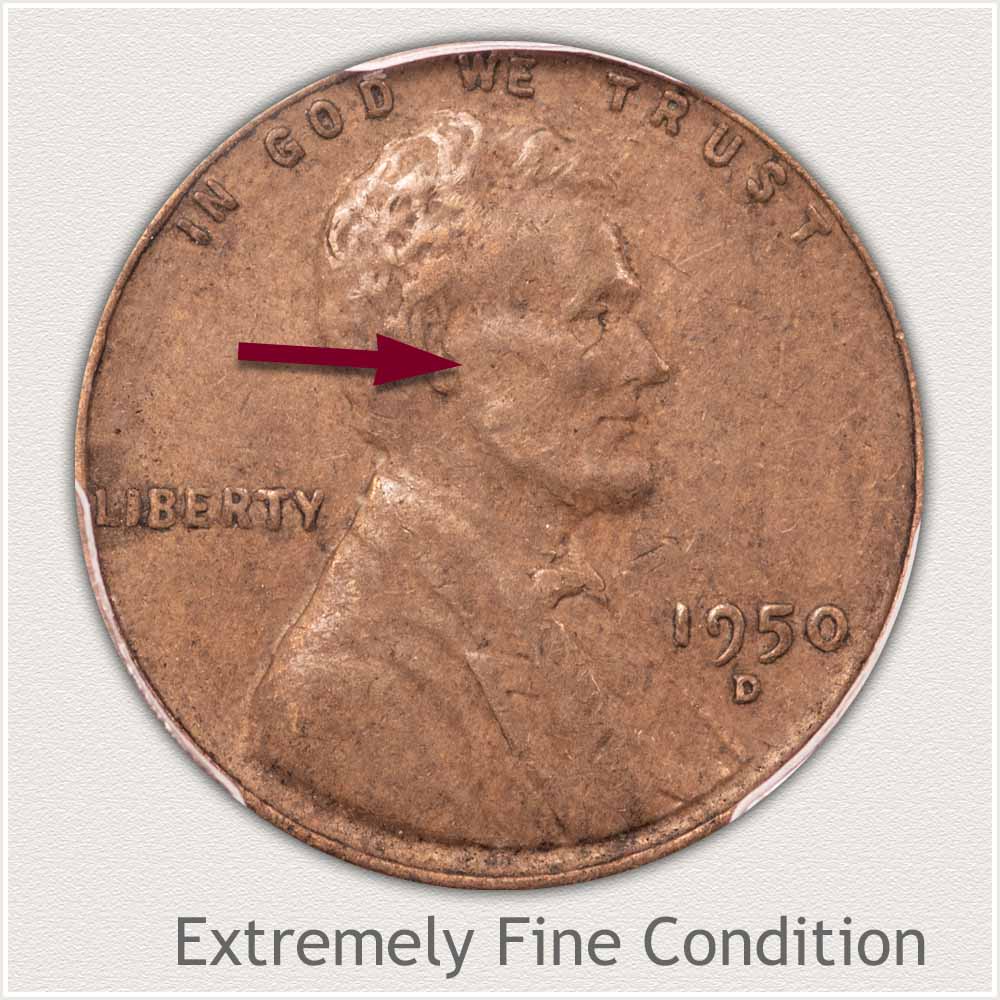 Extremely Fine Grade: As a penny circulates light wear begins to show. First quickly removing luster and brightness. Next small amounts of metal from the high points are rubbed off. If saved early, and the coin remains just lightly worn, a grade of Extremely Fine is awarded.

Compare your coin to the image, notice Lincoln's cheek and jaw are beginning to lose a small amount of roundness to their profiles. Flat areas are evident on each, these are small and confined to the tops of the curves.

Helping add eye appeal are the soft brown tones of color on the surfaces of this coin. Lincoln and lettering along the rim are highlighted by a subtle deeper brown of the fields. A solid, extremely fine grade wheat penny with original vintage look appealing to collectors 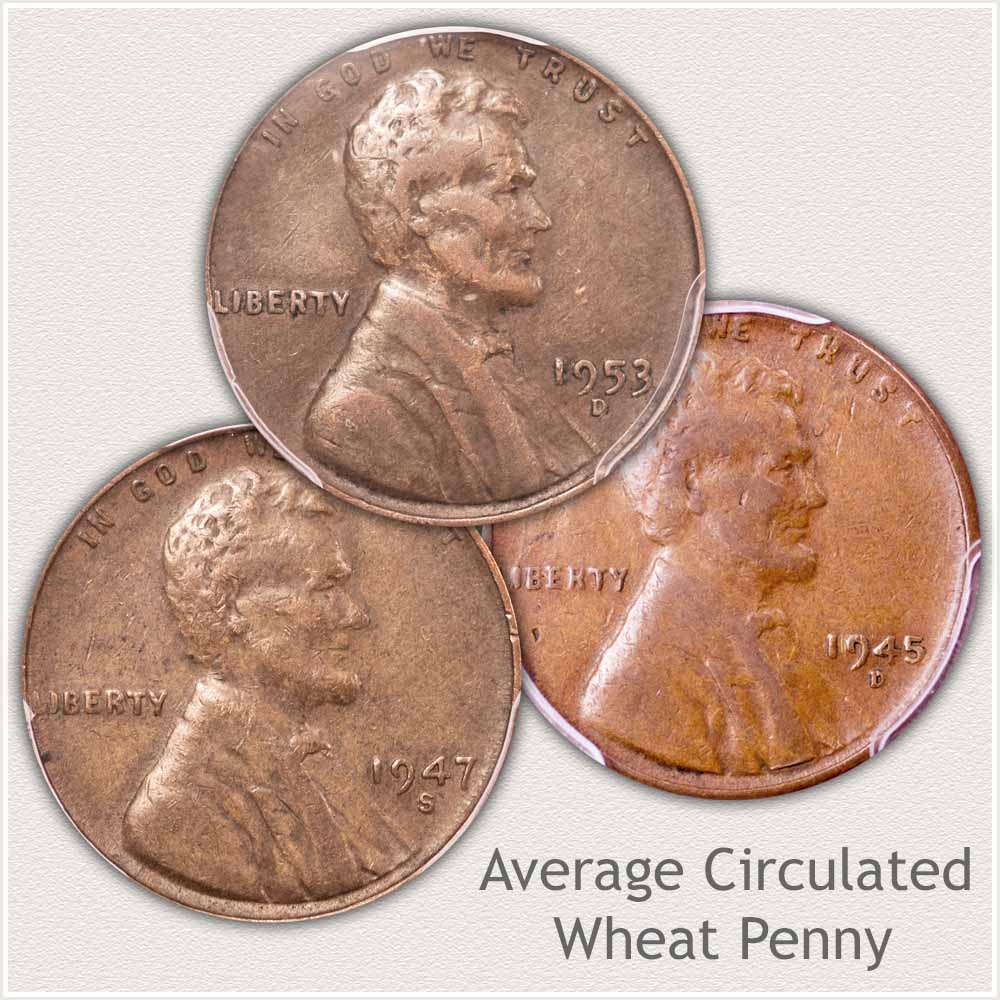 Average Circulated Condition: Saving of the old wheat pennies began quickly after the design was retired and replaced by the Memorial reverse. Large quantities remain today. Any cent from the 1950's below the extremely fine grade is considered average quality.

Moderate condition wheat cents show wear forming flat areas across many features of the coin. Lincoln's cheek, jaw, and hair are flattened and merging with the surroundings. The coins imaged display a typical worn appearance.

An average condition wheat cent forms the base value and condition of the series. Dates in this category are predominate in the 1950's and later 1940's. 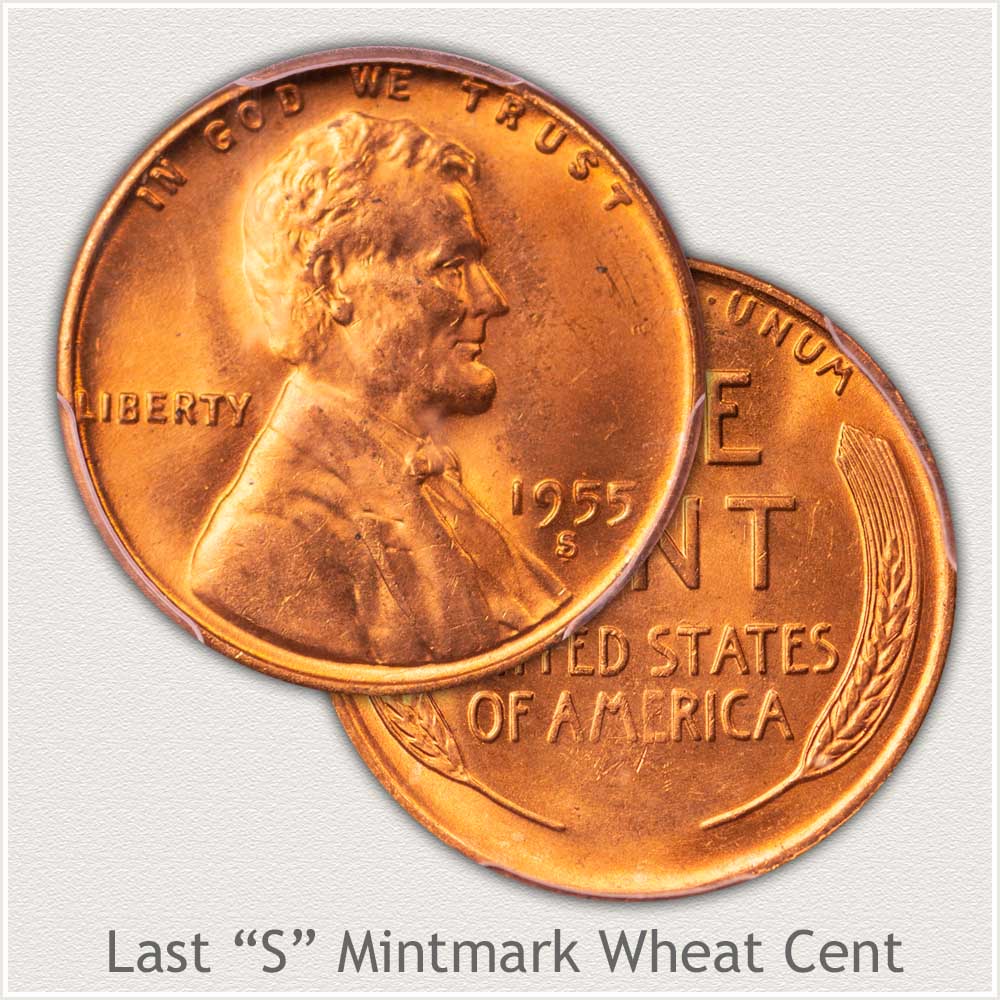 San Francisco mint was one of two mints introducing the Lincoln penny at its beginning in 1909. Ending its involvement in 1955 was met with a degree of sadness and a sense of opportunity. Saving of these coins began immediately, often straight from the bank before they entered circulation. Values were at a premium almost instantly. Fascination with 1955-S pennies remains today.

Demand for "S" mint coinage continues strong. A 1955-S penny fits into the "last year" collecting theme, the overall wheat cent collection, and a feature item in the second era 1934 to 1958 collection of wheat cents. Of interest to all levels of collectors. An advanced collection would seek a very high-grade example. These gem pieces are available due to quick recognition of its special quality as last of the "S" mint mark. A new collector enjoys finding a nice, lightly circulated, affordable prize.