Secondly: Condition becomes a key factor in deciding on an accurate value. Small differences needed to judging grade are highlighted to compare your coin.

A step by step process is followed to determine how much these old wheat pennies are worth.

Date and Mint Mark combinations are first priority. Branch mints struck small letters as part of the design to identify their production. Match your coin to images to identify mint marks and variety. Collections are formed including dates and mints that struck pennies. Values reflect the scarcity of each variety.

Next step, Grading Condition: How well a 1947 wheat cent is preserved is closely inspected and graded. Comparing your coin to the grading images finds a close match.

A complete appraisal of value includes identity of each date and specific variety of a coin. Three mints struck 1947 pennies and are listed separately on the value chart. Of the three the San Francisco mint struck the fewest and are popular with collectors. 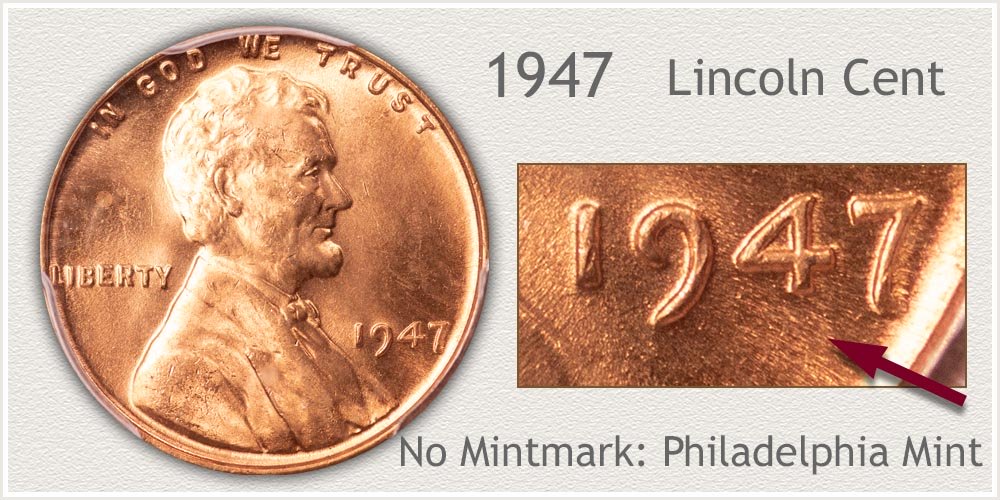 Production at Philadelphia shifted to nickels and dimes in 1947. Striking of cents amounted to 190,555,000 pieces. Enough produced, they are Abundant on the rarity scale. Saving of pennies from circulating at the time contributes to quantities surviving.

Lightly worn examples and nicer coins are those strongest in demand. A bright, never circulated coin from the 1940's is a nice addition to a collection. A circulated piece is showing a slight premium if ample detail remains. Set aside any with strong features of Lincoln's hair showing. These above average coins need a closer look in the next step, grading condition. 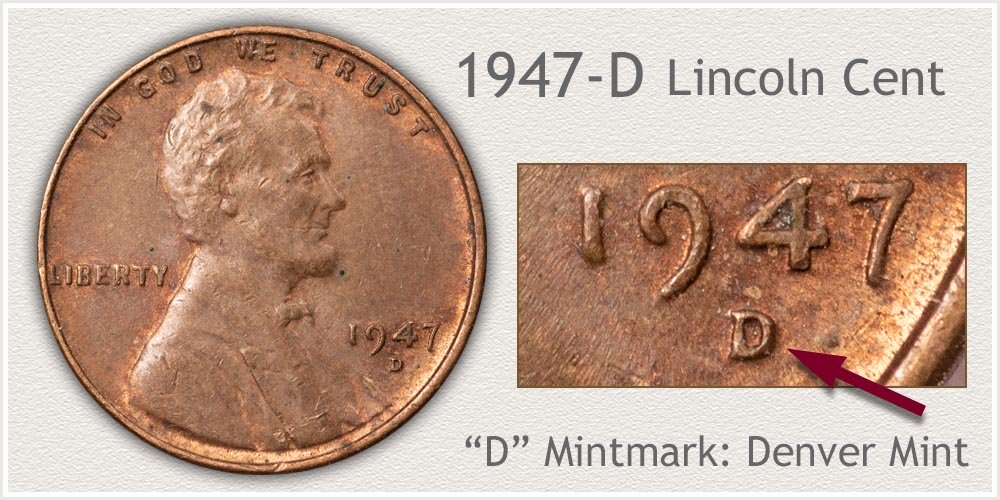 Denver mint (a branch mint) strikes more cents than Philadelphia, the main mint. 194,750,000 were coined in Denver. 1947 became a preview of 1950's production when Denver out preforms Philadelphia every year. 1947-D is Abundant on the rarity scale.

High end Mint State survivors are the elite collectible. Quantities of circulated examples exist, holding values from climbing. A lightly worn piece should be viewed closer, these are appealing to beginning hobbyist, an affordable way to collect a long obsolete design. 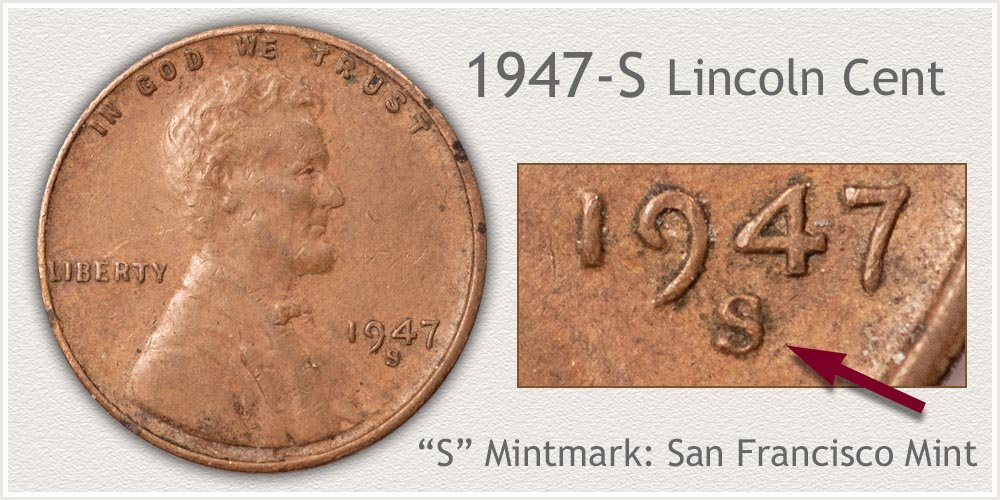 San Francisco 1947 cents are Abundant on the rarity scale. Enough were produced (99,000,000) to create an ample supply available today. These are an intriguing coin to collectors, part of the earlier years of the second era of wheat cent history. 1909 to 1933 representing the first era; 1934 through 1958 the second.

Collectible condition is key to finding added value. Many 1947 pennies exist, many worn beyond collectible status. Condition is judged using the following images and a conservative approach.

Viewing these old copper coins is best done with a single light source. Tiling the coin side to side under a 100-watt light brings fine detail into view. 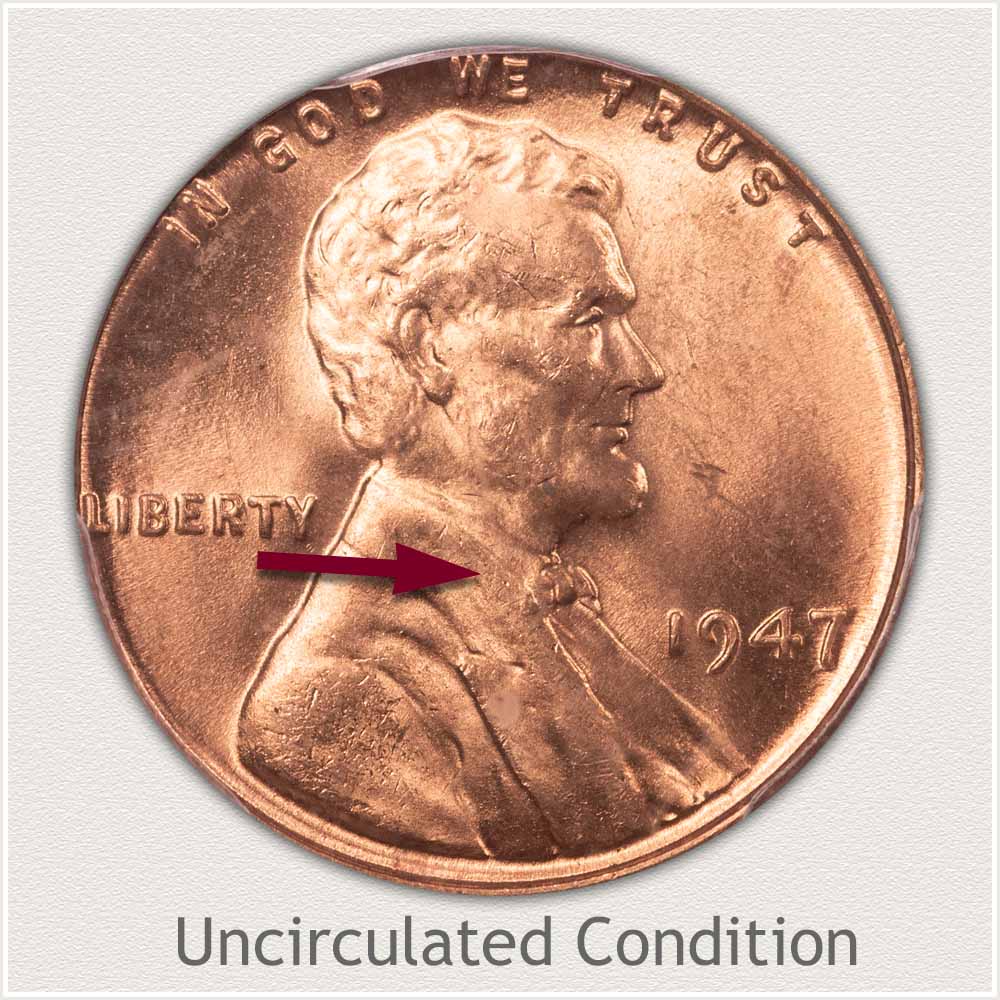 Uncirculated Grade: A wheat penny candidate for the mint state grade must first be confirmed as having no wear to the surface. A fine texture of luster covers an uncirculated coin.

Inspect the coat line separating Lincoln's shirt from his neck. Any wear to the coin smooths the surface of this high point and removes luster. A dulling and difference in texture indicates wear.

Nice original color places this 1947 in a positive eye appeal category. Little, if any deepening of color is evident and combined with few marks to the surfaces grade is a solid mint state coin.

Judge Color and Wear of 1947 Penny: Color shades of mint state - uncirculated grade wheat cents are displayed in the three examples. All coins are mint state, there is no wear to the surface of any of these coins. Each coat line separating the collar and shirt is free of wear. All other high points show no wear.

Toning now becomes one of the factors to value. Bright original luster is on the 1947 penny, without any darkening of color, a desirable coin to collectors. Once toning to the copper begins it lays on top of the surface forming mostly shades of brown, a slightly less desirable coin. Once a coin tones a majority of brown color it is lower in favorability. Value follows this scale. 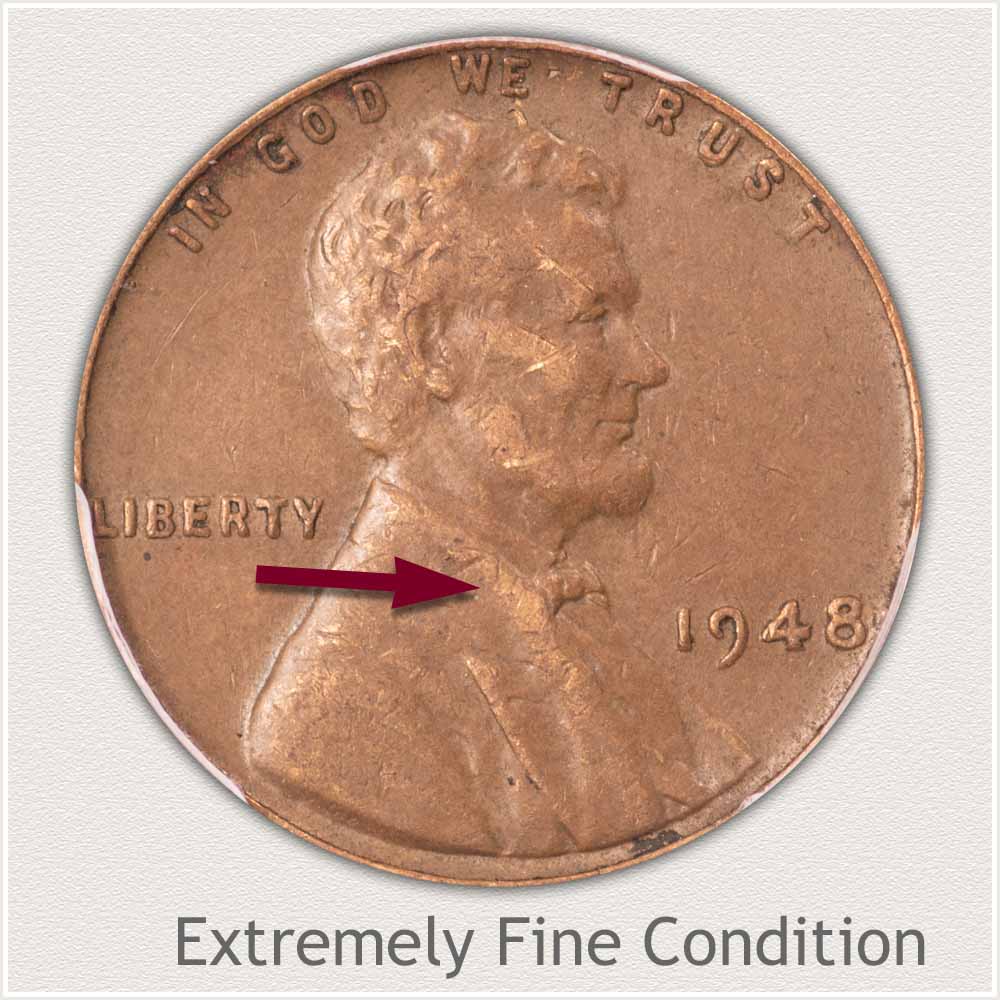 Extremely Fine Grade: Circulated wheat cents from the 1940's are popular as an affordable collectible. Those in extremely fine grade are just lightly worn on the very highest points of the design. It is these coins sought by collectors.

At the line of Lincoln's coat separating the shirt, bow-tie, and neck is very high in relief. Prone to first signs of wear, a small amount of flatness is acceptable. The separation must remain complete from surrounding designs.

Nice warm brown helps give the example a pleasing look without diminishing its remaining detail. 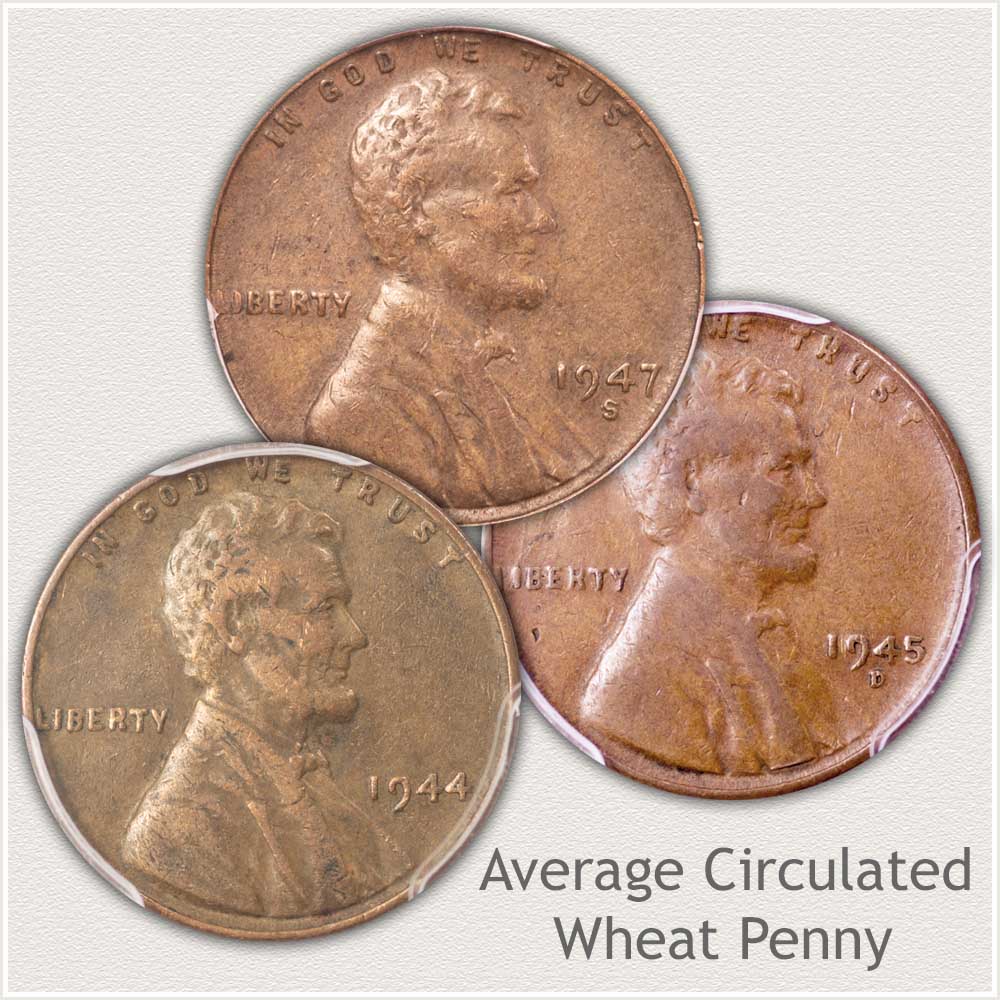 Average Circulated Condition: A 1947 penny with moderate wear is plentiful in availability. Value is in the low premium range. Wear has reduced many finer details and major details are showing flat areas on these coins.

A good indication of moderate wear is the large flat area following Lincoln's coat line. Once rounded in profile, a level area extends the full length of the lapel. As wear progresses a merging of the bow-tie and shirt indicates heavy wear.

1947 wheat pennies are considered Abundant on the rarity scale. Many were saved, ranging in grade from mint condition to worn examples. A very affordable date and Philadelphia mint coin. 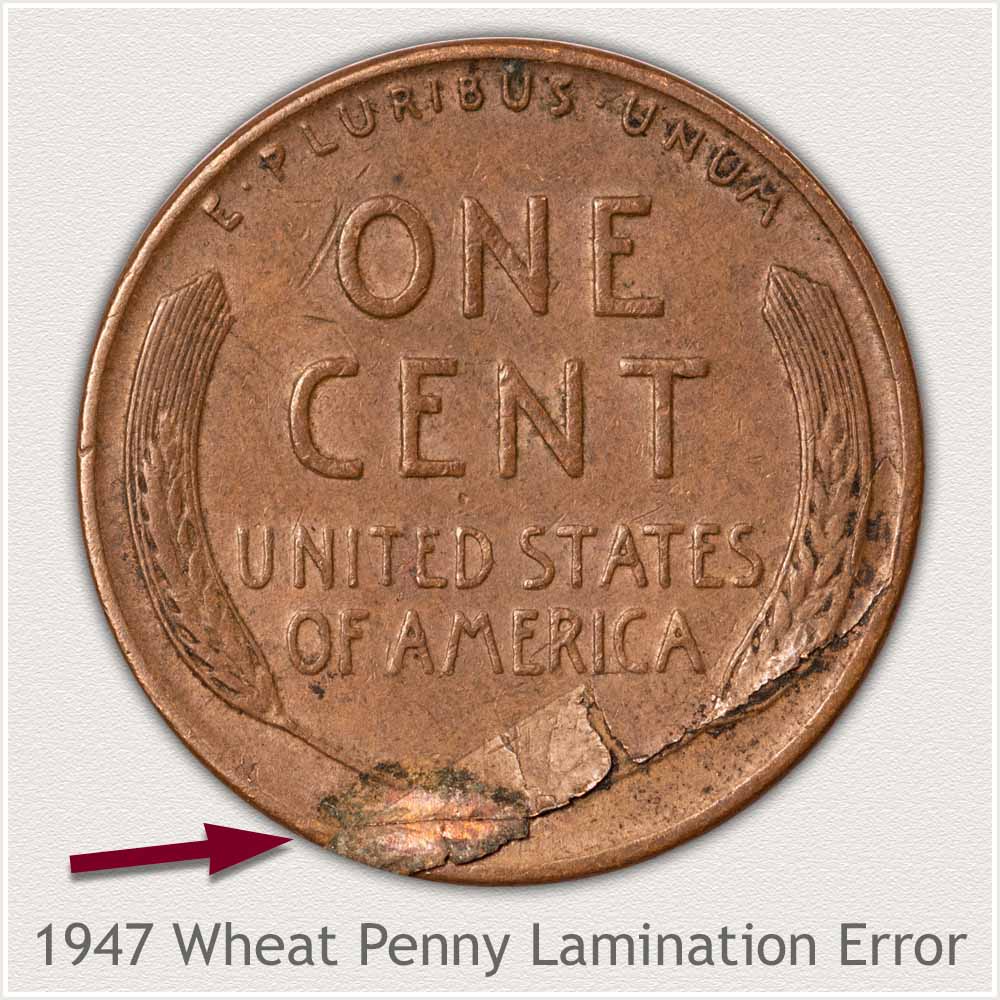 Setting the coin apart and adding interest plus value is a large lamination flaw. Of the millions of pennies struck in 1947 a few errors were missed by quality controls and entered circulation. A lamination defect caused in the alloy mixing, rolling and annealing phase of manufacture now shows prominently on the reverse.

This dramatic error raises the status of the coin from common to uncommon. It also raises interest and curiosity levels. It becomes a coin worth keeping, highlighting the minting process and the skill of perfection needed to produce millions of perfect coins.

A description of this coin would include: 1947 Wheat Penny, lightly worn, nice even brown toning and lamination defect not obscuring important design features. If anything holds value lower, it's because the lamination is on the reverse. A premium value over minimum is expected for this coin.